This baby.  Is a tornado of destruction. 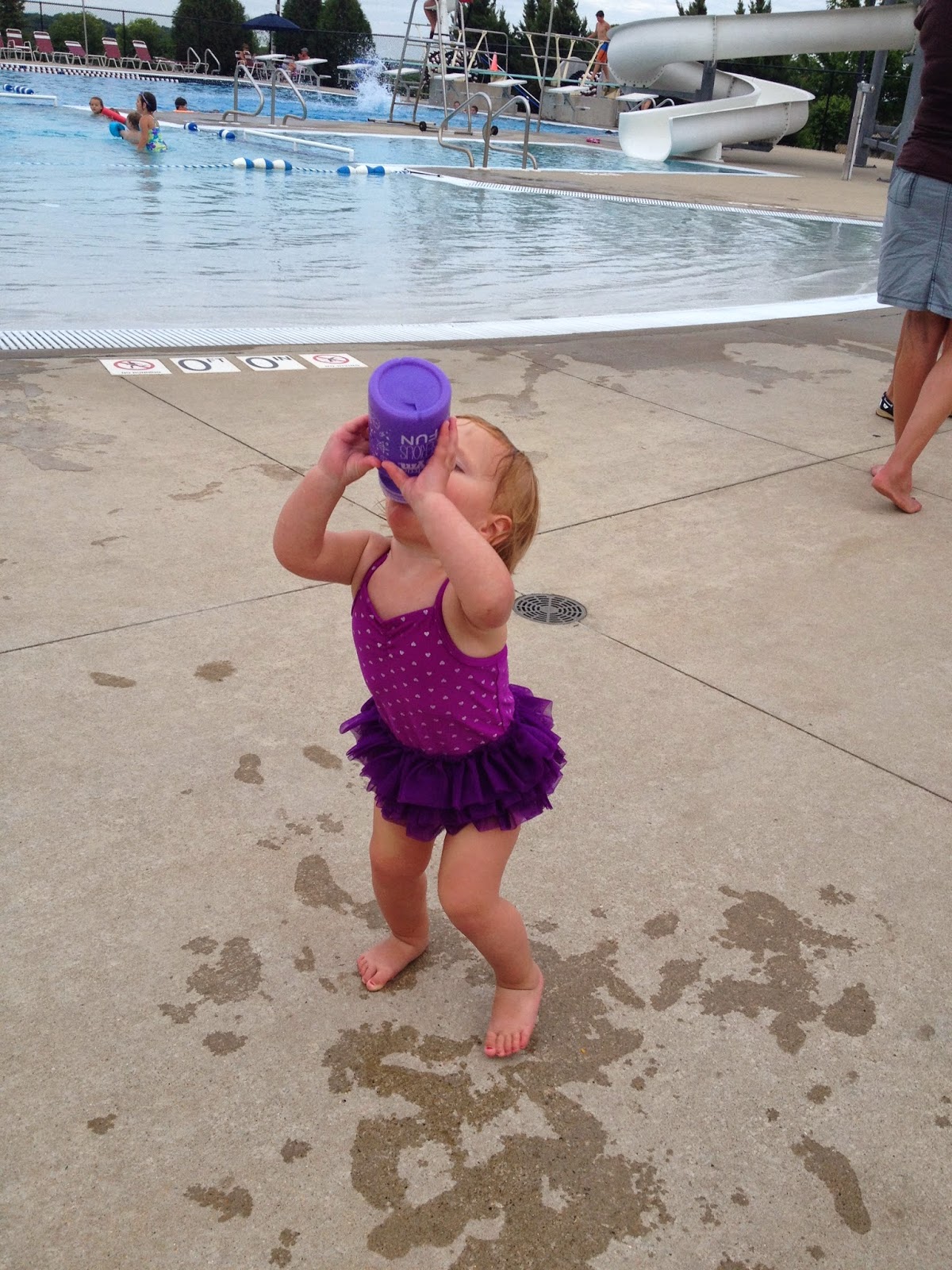 Speaking of tornadoes, we bought a new weather radio today after ours remained silent during today's 8:30 am tornado. WTH?

In other terrible news, Harrison complained of chest pains again yesterday, and I sent him to football camp anyway thinking he was just overwhelmed by the thought of another long day in the sun (which? he totally was, BTW.  He couldn't decide whether or not he wanted to go back and he was so indecisive that I realized it was the decision itself that was driving him nuts, not anxiety over the actual camp, so I just told him he was going, chest pain-- which I thought was fake-- or not).  But then we checked on him last night after he was asleep and found him propped up with pillows and stuffed animals-- a sure sign of pericarditis because his chest hurts when he is flat on his back.  We called the cardiologist right away, and she said to come in for an echo as soon as the tornado warning expired.  There is no fluid yet, but he is back on his Ibuprofen and Zantac regimen because his pericardium looked "bright" on the screen, and his doctor thinks we caught it at the very beginning.  We go back in 10 days for another echo, and the rheumatologist (consulted mid-tornado) thinks we might want to consider a long-term anti-inflammatory that is an off-label gout drug that has not been proven to prevent long term thickening of the pericardium but hasn't been proven NOT to prevent it either..  Erm.  Luckily, Harry has his 8-year well check on Friday, so we can discuss it with his pediatrician.  Bah.

But back to the mundane:

It was cloudy but not stormy this afternoon, so I ditched the babies with Ben and took Jack and Harry to the pool and read a book.  Heavenly. Especially because I also did it the other day with just Jack-- twice in one week?? UNHEARD OF.  Except Ben is not the hugest fan of the pool and he likes to hang with the babies and work on his online classes, so this might be a THING. 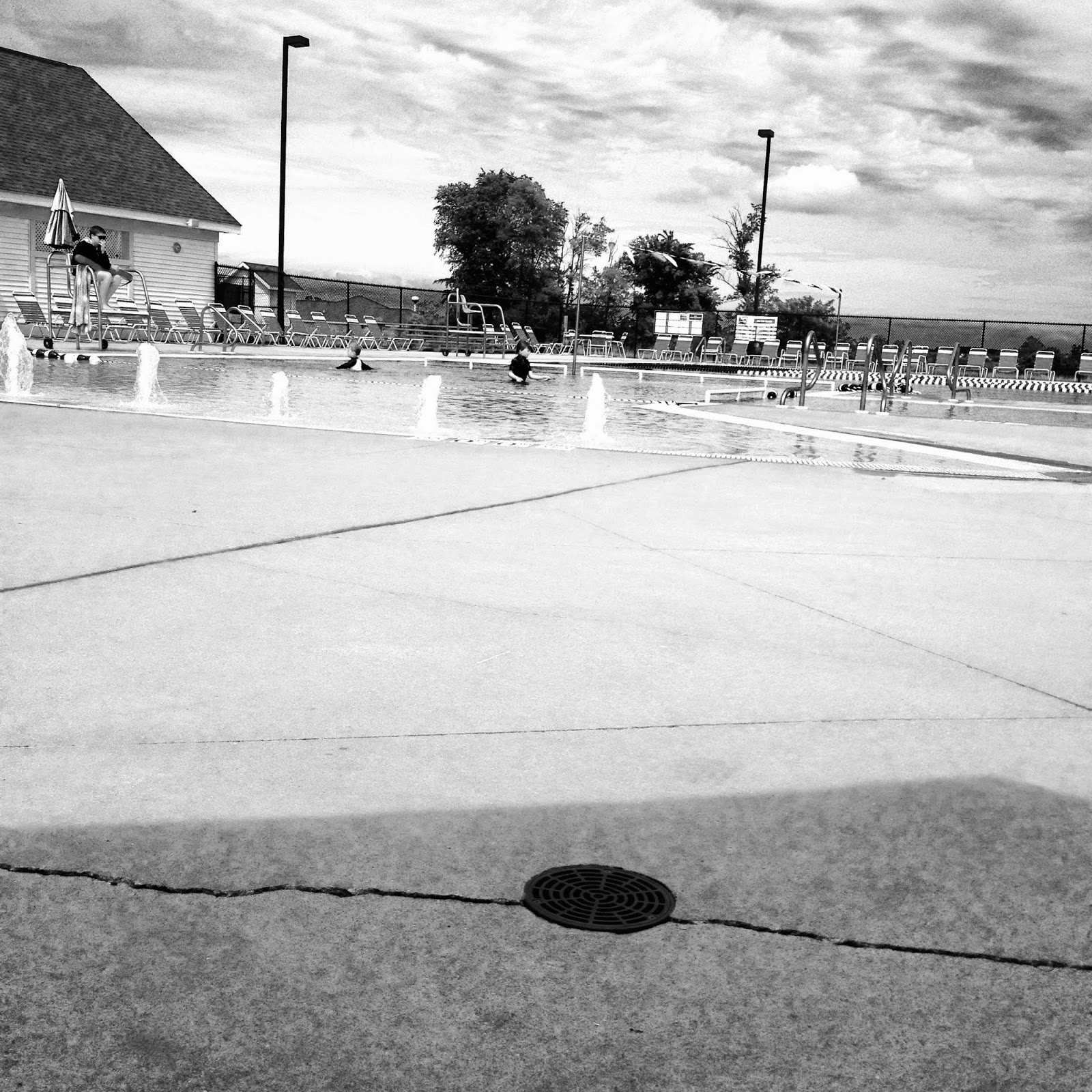 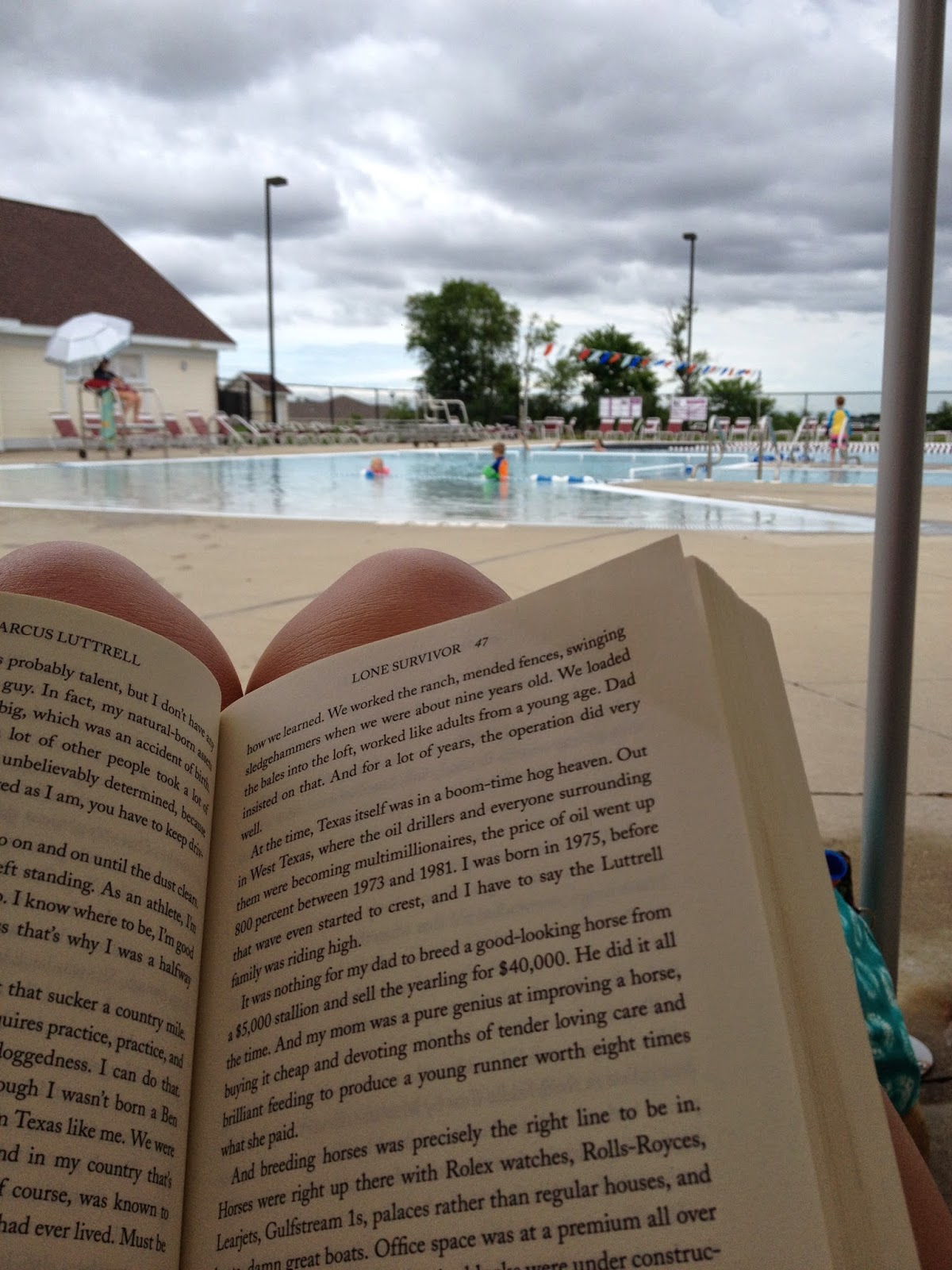 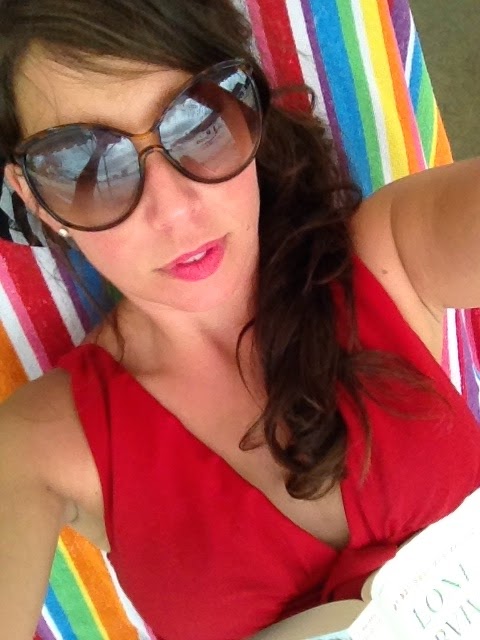 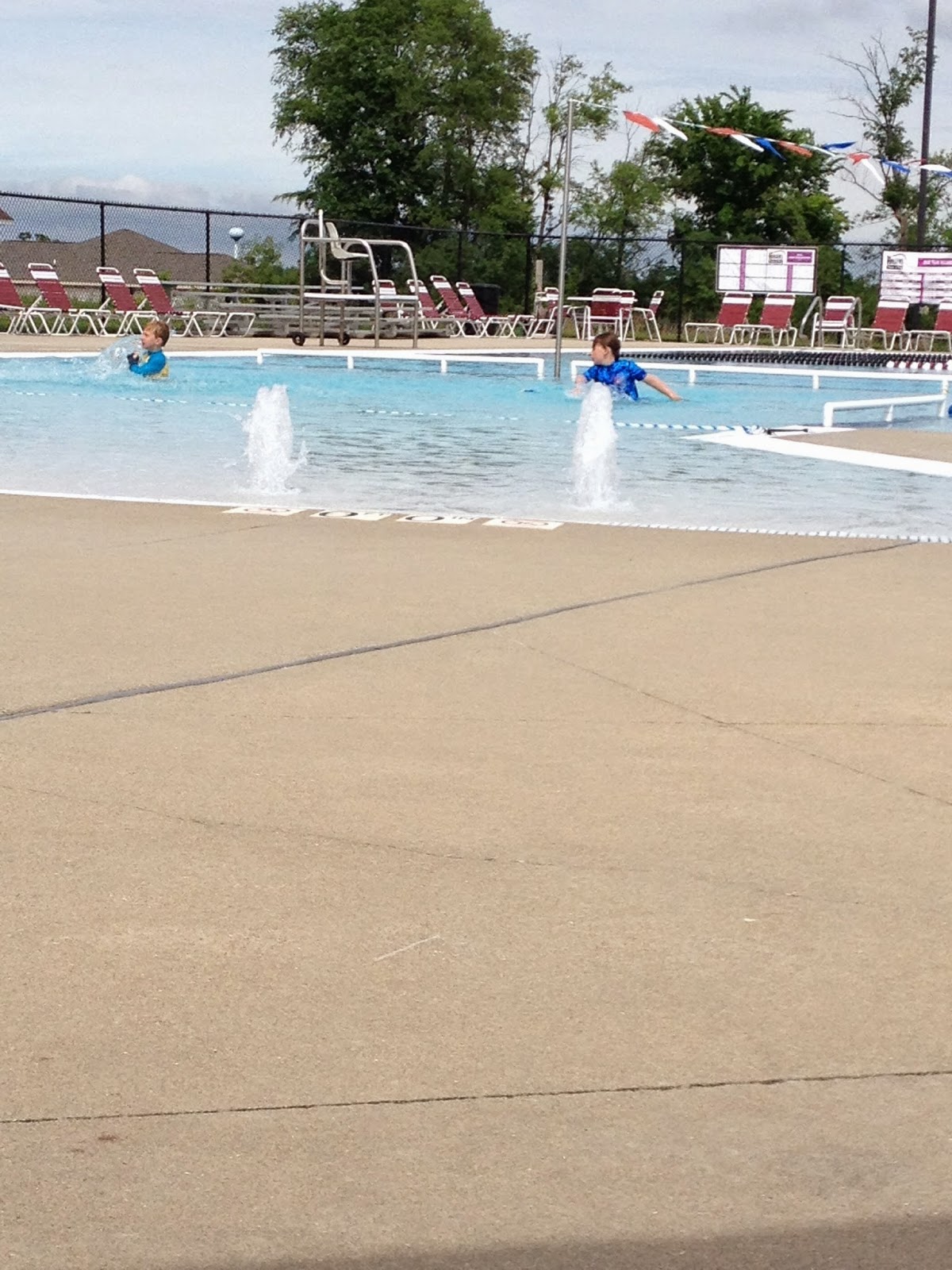 Last night, Harry did not have rehearsal for his play, but he did have hockey until 6:40, so we all met up at the pool then.  It was kind of chilly, but all 4 kids loved the novelty of no rash guards. 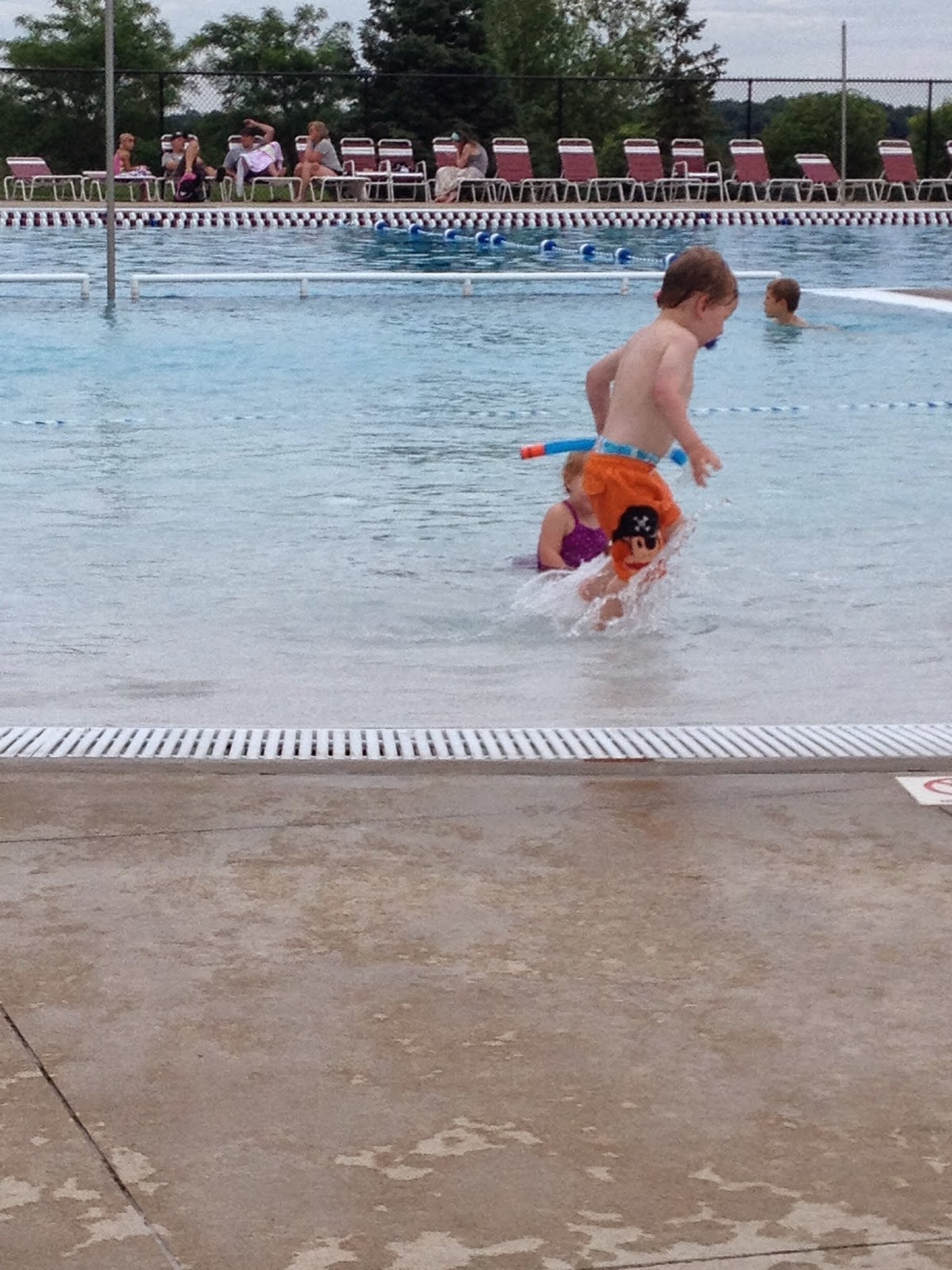 As you can see, Cooper is totally comfortable in water over his head.  He can ho,d his own with the big boys and loves playing with whatever group of rowdies are in the 3.5-foot area.  But Ben took him to swim lessons, and it was his 3rd giant FAIL in a row, so we are going to stop and try them again next year. 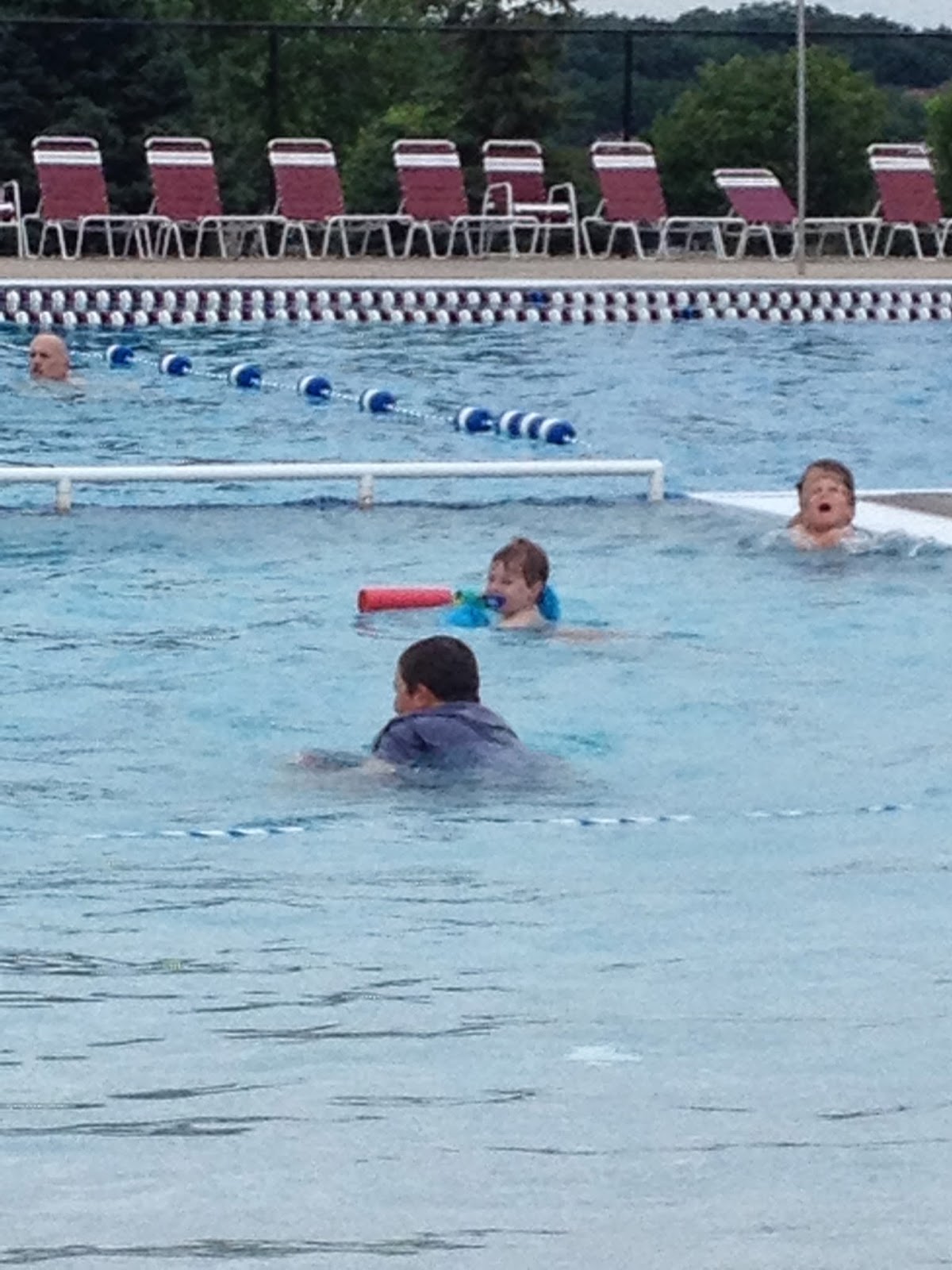 She would freaking LOVE to go to swim lessons.  She super dangerous, BTW.  She seems totally fine and then BAM!  She falls in from the edge or trips and goes under or tries to drink the water and gulps a few gallons-- she lures me into thinking she's competent; I remove my eyes to help someone else, and she almost dies.  The scenario plays out at least 5 times an hour.  SO RELAXING. 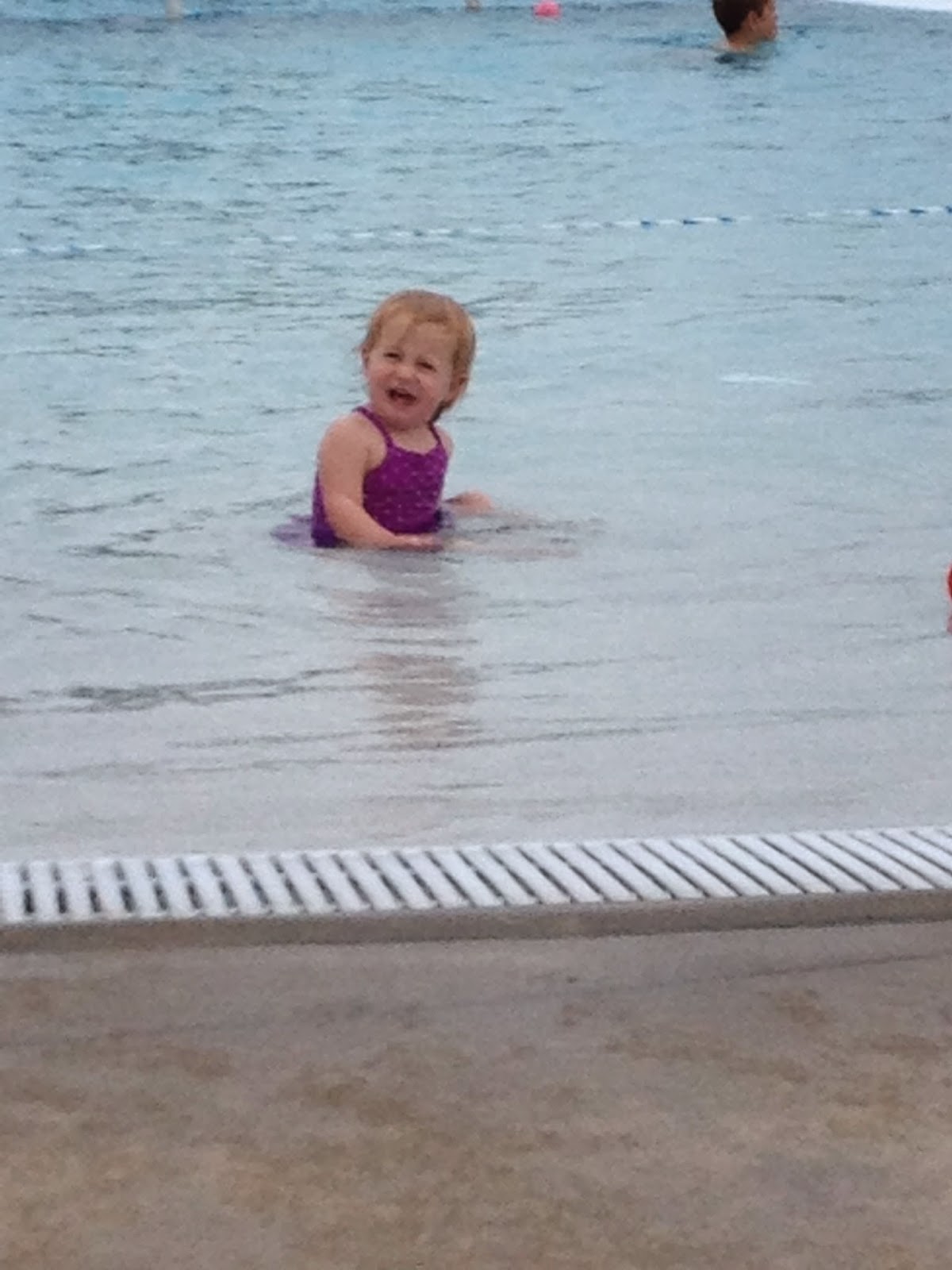 I brought the 3 little kids right after dinner.  By this point, I had been alone with them for 26 hours.  As soon as Ben showed up, I bought a beer, grabbed my phone, and flopped down on a chair. 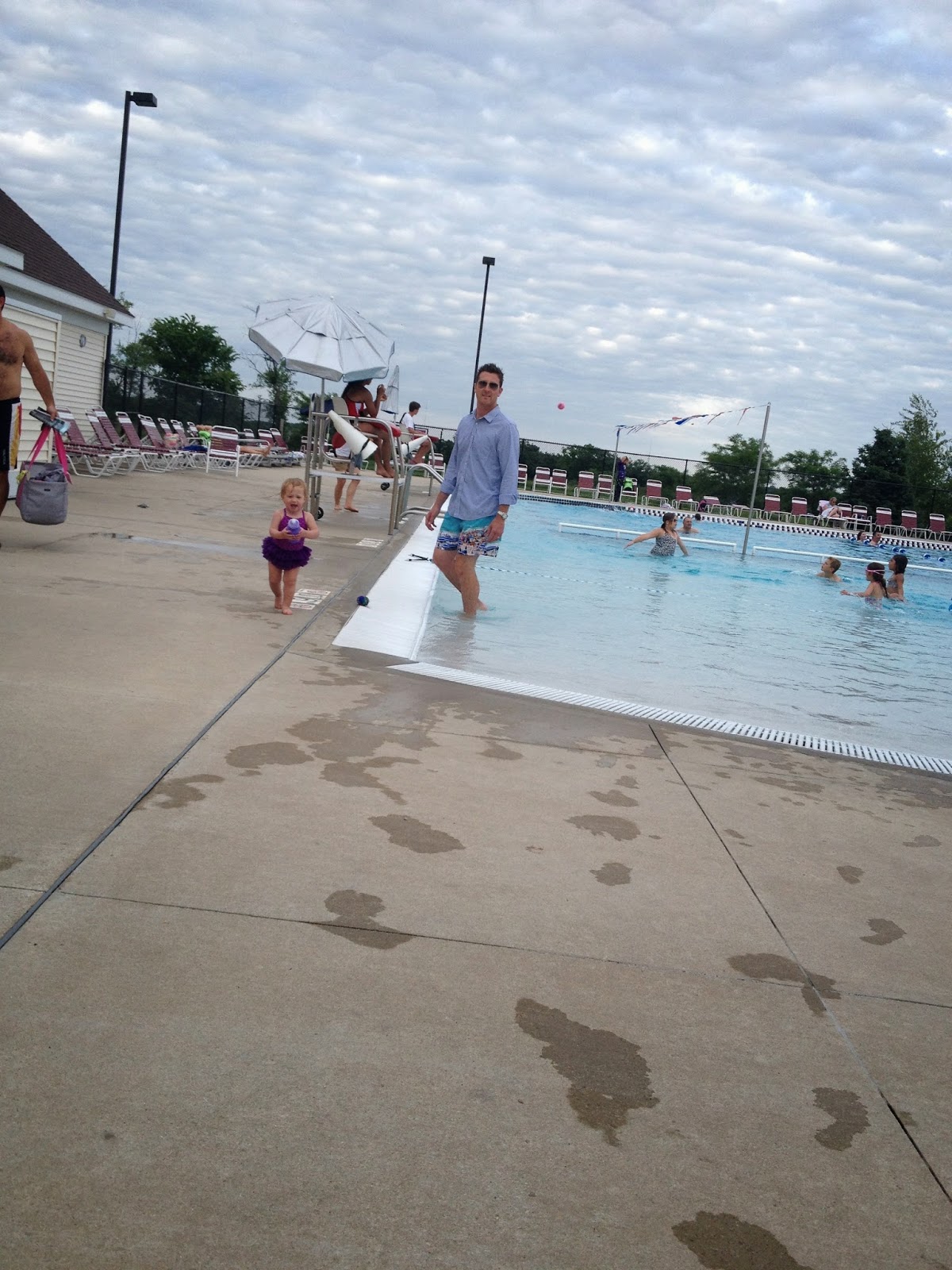 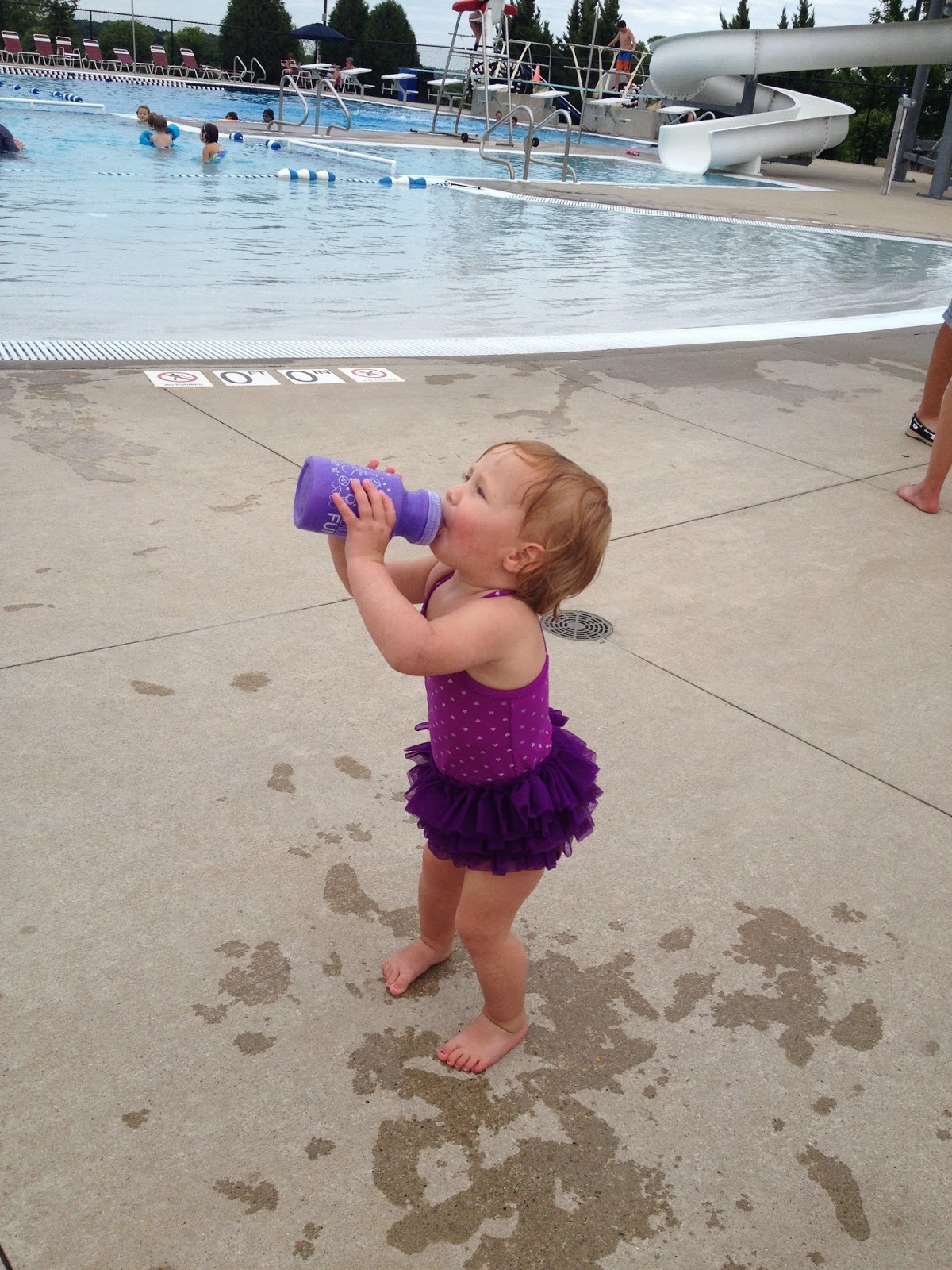 This was Monday.  It was 88-degrees and perfectly sunny, and Jack and I went to the pool alone.  Here he is cooling off with a refreshing corn dog.  Barf. 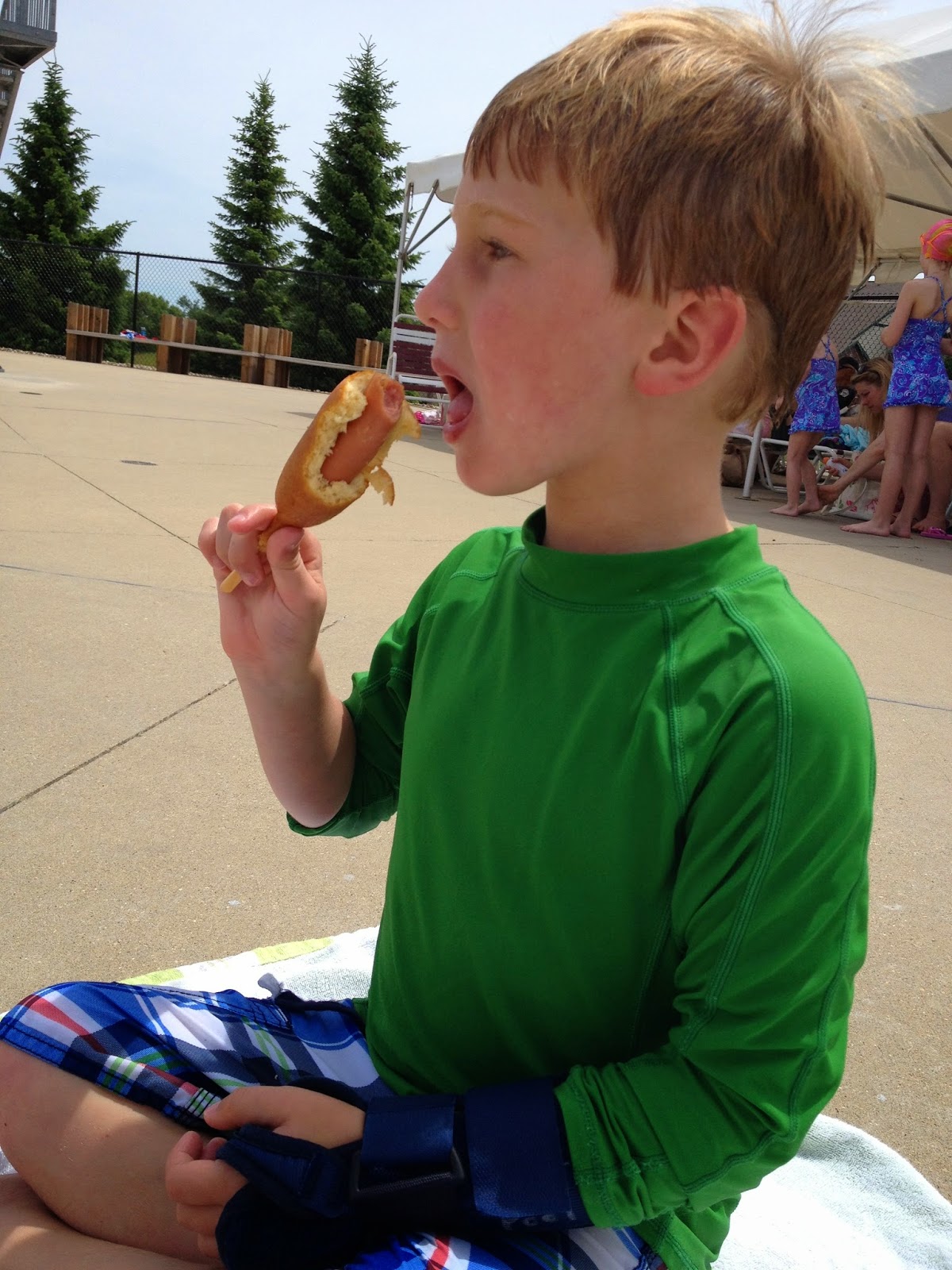 Okay, but seriously,  Dorthnado.  She is a whirlwind of destruction, and nothing is safe.  Books. Remote controls.  Clothes in drawers. Clothes on hangers.  Anything in cabinets.  In fact, see that chair in the picture?  It is blocking off our snack cabinet because I could not pick up anymore bunny crackers (Cooper calls them bummies) or Pirate Booty.  And I was too lazy to move it when the kids wanted food throughout the day, and I fed them much healthier snacks-- you know the ones from the perimeter of the store that we keep in the fridge? 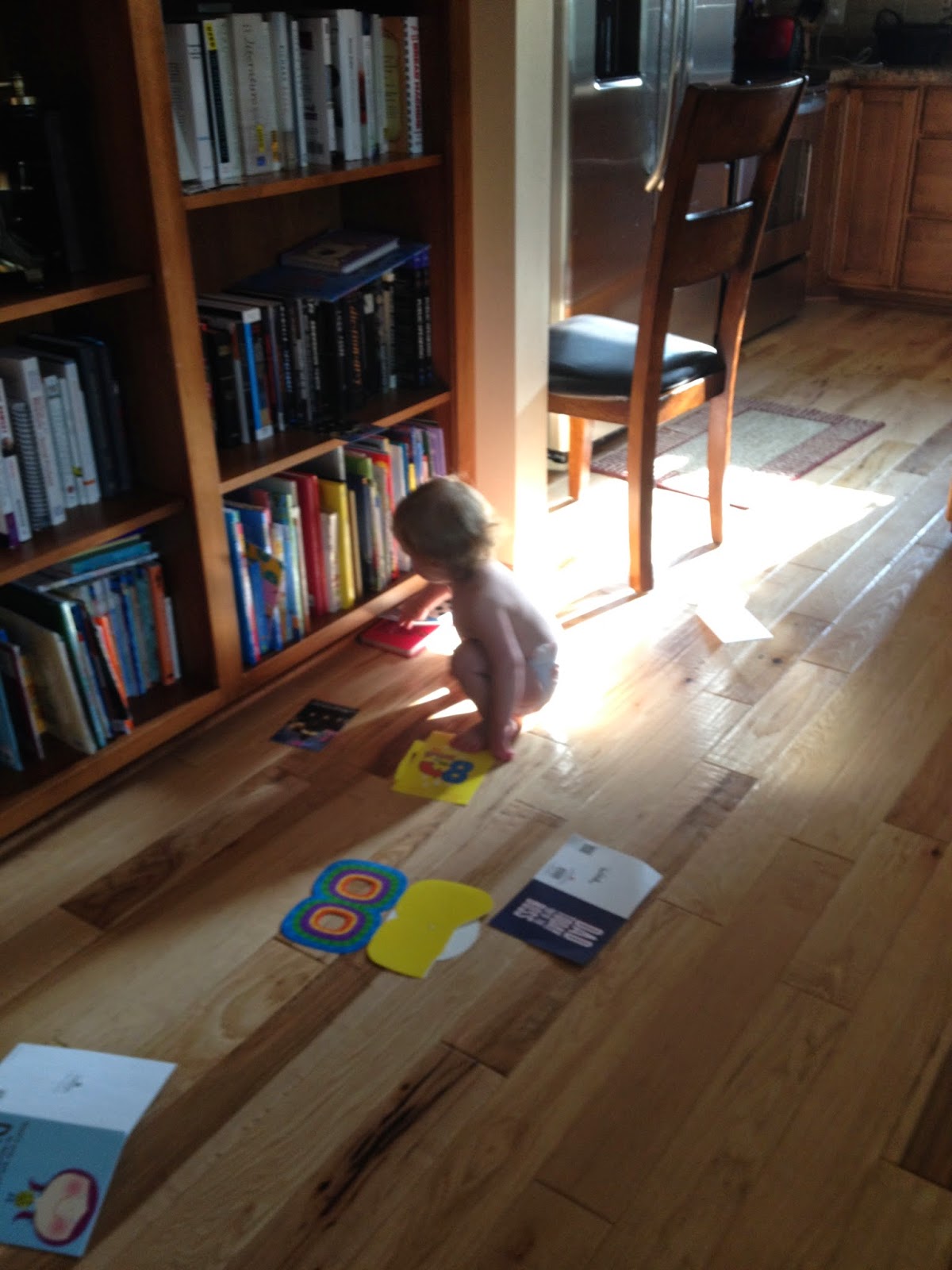 It is completely impossible for me to clean a room with her around because she follows behind me determinedly uncleaning it.  Every 10 minutes or so I notice her trying to kill herself or break something expensive.  Today, she nearly jabbed a hole in the TV with the broom.  And when I try to intervene or take contraband away from her?  Holy shit the screaming.  Ear splitting.

But look how redeemingly adorable she is. 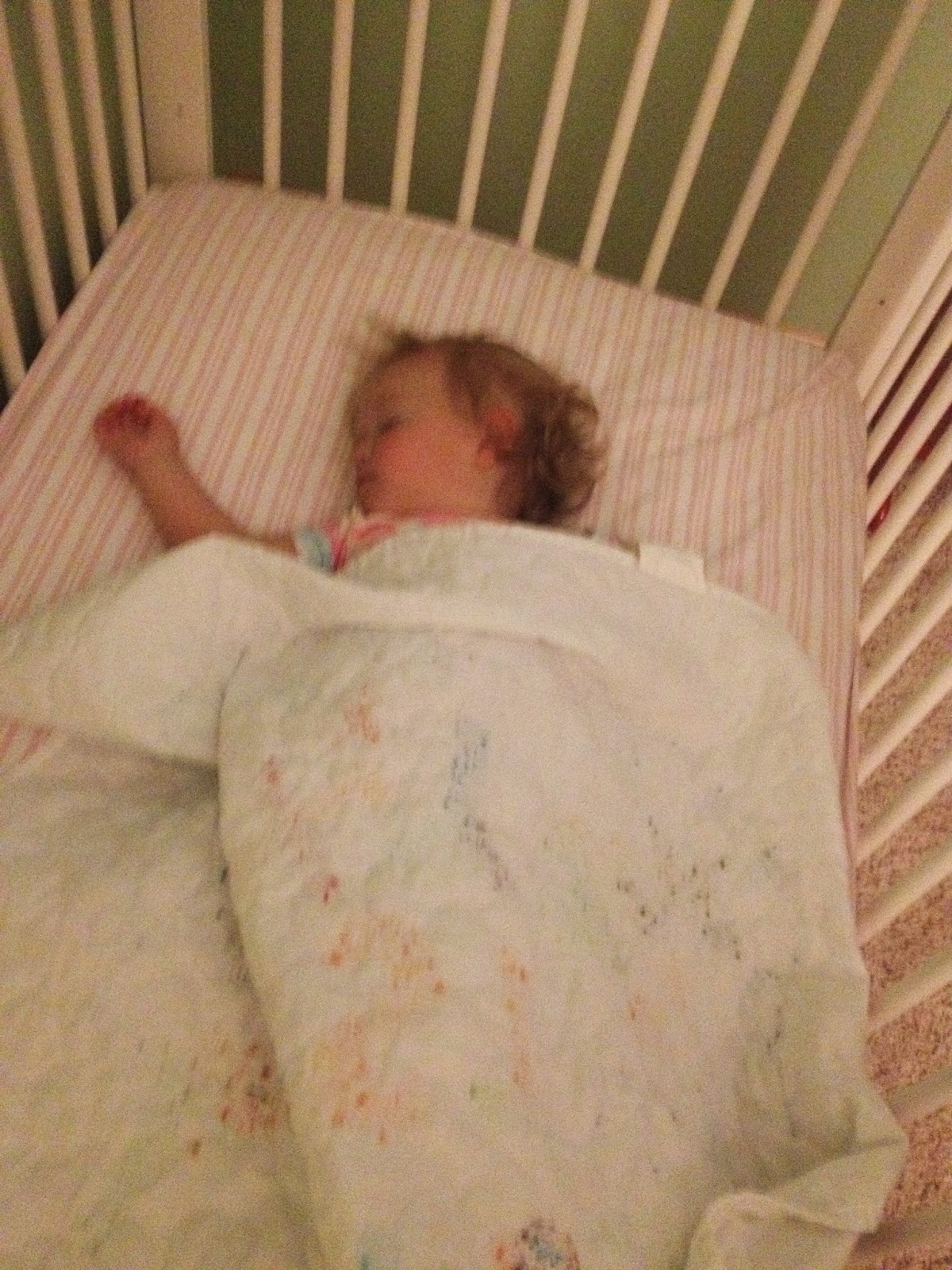 Excuse the creeper comment... but where is your red swimming suit from?

Your summer schedule sounds LOVELY. On your recommendation we've been going to the pool more and SURPRISE, we are having fun!