Have I mentioned that Cooper has a speech delay?

He qualified for Birth to 3, our county's sliding-scale, in-home speech pathology program (they also offer occupational therapy, feeding therapy, etc, but Cooper just needed speech help).  No one specified his delay percentage, and he qualified because he had an older sibling in the program.  Remember Jack?  He was in Birth to 3 for 6 months when he turned 2.  But in 6 months, he started chatting like a champ and was summarily discharged from the program, and we figured the same thing would happen for Cooper.

I have been asking Cooper's doctor about his speech since he was 9 months old and didn't babble or make any razzing noises.  But then he had a small explosion and developed a vocabulary of sorts.  But then that went away.  Not in a scary autism way or anything like that-- he just sort of never used any words regularly except for mama, dada, this (and all-purpose word for sure), and a weird gulp-gulp-gulp sound that he says when he wants a milk.  He has never in his life-- and he still doesn't-- parroted back to us.  Any attempt to get him to repeat something we say are met with stony silence, even words he knows.

His receptive language is fantastic-- he knows exactly what we say, can follow multi-step directions, etc.

He loves to look at books independently and can point out anything he's asked to find, and he adores it when we read to him.

And we DO read to him and talk to him and limit his screen time and generally parent him competently.  Which is something his fucking speech pathologist DOESN'T SEEM TO GET.  She is very judgmental, especially because Cooper still has a pacifier, which YES.  WE GET IT.  It's not just that he has a paci, though. (which yes we had successfully made just a night or nap thing and then he got sick like 4 times in a row and then we went to Disney World and now he uses it a lot again)  HE HAS NEVER MADE ANY NOISES on a developmentally appropriate schedule.

And we have Harry who has never shut up, and chirpy little Dorothy who is 15-months old and regularly says mama, dada, Cooper, night night, hi, teeth, eat, uh-oh, roars like a lion, makes a choo-choo train noise, and parrots anything we ask her to and has adopted Cooper's weird gulp-gulp-gulp sound for milk.  It's not just us being shitty is what I am trying to say.

Cooper has made a bunch of progress in the last 6 or so months.  We had a service plan meeting with the speech path and the social worker assigned to his case and reviewed our original goals and found that we met them all! Which was awesome of course.

Just now, he saw a picture of the strawberries we picked yesterday and said "Strawberries!  I pick!  I eat all up.  Yum yum yum."  But he is still really hard to understand.  He adds new spontaneous words to his vocabulary everyday and has lots of 3-word phrases, but he does not talk as well as his peers for sure.

The speech path is running out of ideas.  She is very judgmental that he is not in daycare to be around other kids (WTF?  Projecting because she is playing with my kid while her own are at daycare?) and wants us to make a book of simple pictures so Cooper can point to things he want.  (WTF?  He is great at making his wants known, and this seems like something that would have benefited him 4 or 5 months ago but ignores the progress he has made since then).  She only comes every 2 weeks and cancels a lot because of her own kids or sometimes only stays for 15 minutes because she is running late, so the services are clearly not ideal.

We had a hearing test at a pediatric ENT, and interestingly Cooper tested below normal across the board-- consistent with a kid who had tons of ear infections, only he hasn't.  He goes back when he is 3 for more tests.

But, the reason I am writing this NOW is that he gets evaluated for the school district's early intervention program starting tomorrow since county services only cover kids until they're 3.  It's a 90-day process with 3 weeks of in-home evals and then a meeting with the school district speech path and the Birth to 3 social worker.  I will keep you posted OF COURSE.  The whole thing is bothering me.

Just now he asked "Yummy yummy yum?" and gestured toward the cookies I baked during nap.  I asked if he needed help getting one from the counter and he said "No mama.  I do" before dragging a chair to the counter and snagging a cookie.  He requested an episode of Thomas and Friends to go with his snack by pointing at the TV and making a train noise.  Then when I started his show from the DVR, he said "Mama!" and put his hands over his ears.  I asked if he needed the TV louder or softer, and he scream "WOUD."

So he IS talking and his frustration level is so much lower than it was a few months ago, but I still don't know why he isn't talking MORE or how we can really help him.

In contrast, the chatterboxes: 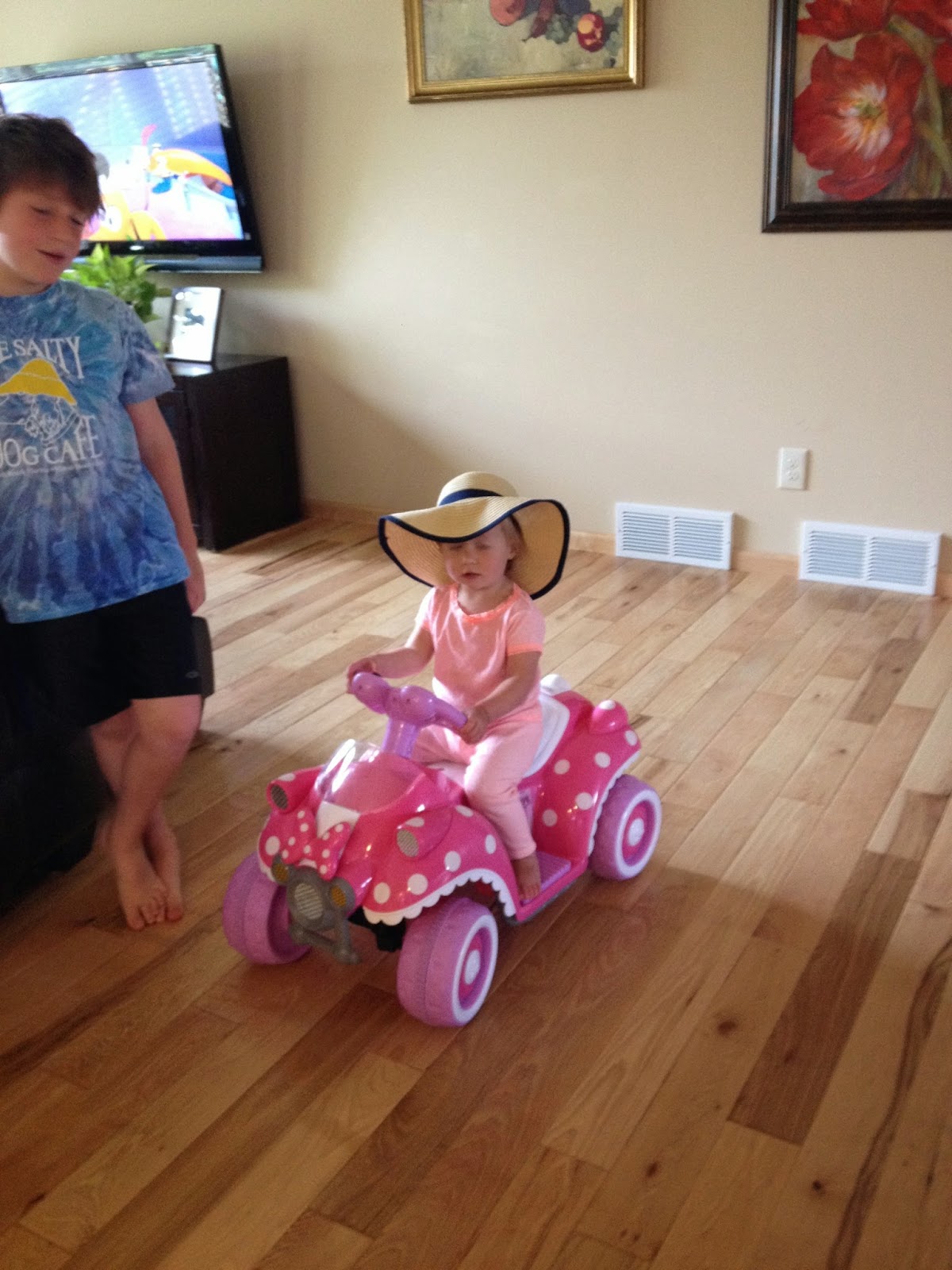 I don't have any specific experience with this, but I would be really annoyed with your speech therapist as well. I just want to say that a pacifier should not be considered a "cause" of speech delays. That's ridiculous. Suggesting he needs to be in daycare around kids his own age also seems crazy to me--particularly when he has three siblings and two involved, caring, active, and competent parents. It's not like he doesn't get socialized! I'm glad to hear that you have seen real improvements and I hope you get more of whatever it is that Cooper really needs.

I've never commented before but as a trained early childhood special ed teacher I would be mildly concerned about a few things based on what you said. 1. Before you said anything about the ENT I questioned hearing. A full audiological eval is warranted. 2. Your speech therapist does not sound helpful at all. He does not need daycare, he's got a family and the park and classes from what I've read on your blog. 3. Kids develop at different rates and what is considered normal is wide ranging. Do not be alarmed but follow thru with the assessment. I did them for a living and hopefully it will be a good experience for you all.
I'm local if u need any assistance. Best of luck.

I'm so sorry, Sarah! I can understand your concern and feel for you. For what it's worth, I have heard so many people say that speech delays are common, especially among bright children. Also among children who are not first born and, thus, do not have to speak early because their siblings understand them. I've had the same issue getting rid of the paci with Levi. His dentist told me not to worry about it until he's 3. Anyway, kudos to you for taking all the right steps to get help at an early age. I'm sure it will work out!

So he can be around other kids? What? His own 3 siblings aren't enough kids?!!?? That would make me super pissed.