Notes from the end of break

I've spent the last week feeling like a total failure because I swore to god my milk was drying up.  But now-- a day when Cooper has been been asleep more than he has been awake after he ate every 45 minutes yesterday-- I think maybe he's just been having a growth spurt.  Hmmm.  I thought that happened at 3 months, not 4.  But still, he looks large. 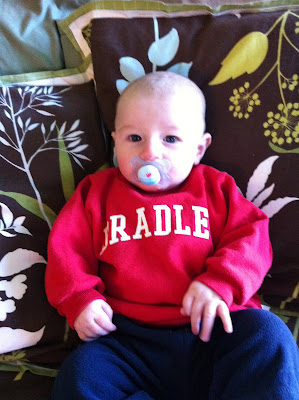 Sometimes I feel like a total breastfeeding rookie even though this is the third one. It just seems like a long time before he can eat solids (2 more months), and he HATES bottles, so Ben is going to have to meet me outside my classroom twice a week. It would be helpful if he could eat some cereal and purees instead. I am totally committed to exclusively breastfeeding for 6 months, though, so that stuff will have to wait. And believe me, I don't want to rush his babyhood. Harry and Jack, though, took the occasional bottle, but this kid absolutely HATES them-- he drank one for a babysitter once when I went to a meeting. Ben has limited success and a cranky baby on his hands. When I experience an issue with my milk (or when a growth spurt makes me THINK there's an issue), I kind of panic because the breast is the ONLY thing he wants. Gah

I was just crazy enough to let the kiddos play play-doh this morning.  Harry was able to clean it up all by himself, and I gave the vinyl a quick vacuum, and it was SO EASY!  I love our playroom. 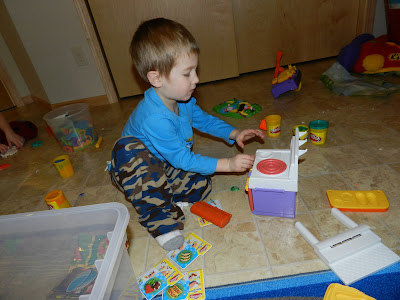 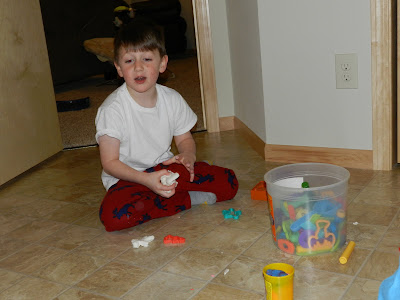 Then we went to the park because it was a freakish 40 degrees. everyone had fun, and Cooper fell asleep for the third time today, a mere 40 minutes after waking up from his second nap. He's stretched his feedings out to like 3 hours apart today, too. So confusing. I can see why people freak and think they don;t have enough milk and wean early. Because I was so almost there the other day, and I have done this before. Successfully, even. I think I'd like to stop pumping because it is driving me batshit crazy. I aim for an extra 3 ounces a day and have quite the stash in my freezer, but I have been breaking into it because I thought my milk was drying up, so I have probably wasted 30 ounces over the past week (because he.won't.drink.it).

Okay. This is turning into a really boring rant about ounces of breast milk.  How about a few pictures from the park, huh? 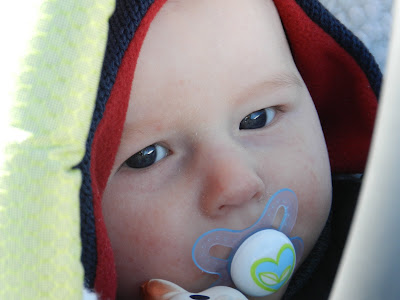 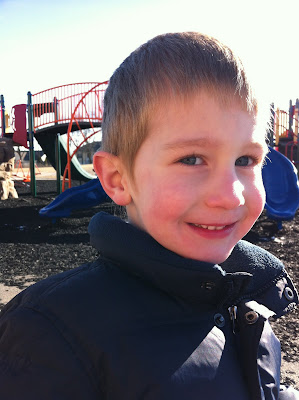 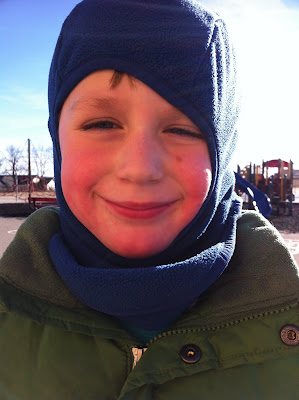 OMG. Got to go break up a violent kerfuffle about whose Bat Cave is bigger (Freudian, huh, on a couple of levels?). School is back in session (for them and for Ben but not for me) next week-- phew!
Posted by Sarah at 3:03 PM

I am "glad" AJU7 isn't the only one refusing a bottle. It is very frustrating that their schedules change daily too - AJU7 has me SO confused the last couple of days. But, like you, I am not ready for the baby days to be over (or to clean up after baby food). Hopefully our little ones will figure out how to not make us so crazy soon though!

Elisabeth has that Bradley t-shirt. Well, I should say, she did when she was 2.5. She wore it to Evan's graduation. :)

Then Julia wore it and now it's waiting for this baby to wear a 2-4 in shirt sizes.

Sometimes babies will take bottles from anyone but
Mommy, if she is not there.

I had the worst time breastfeeding this time and the LC told me it happens to a lot of third time mothers. Isn't that weird? It all worked out, though. And now we're done with bottles too and onto sippies. So Sunrise/Sunset!

Ethan refused a bottle forever and then refused the breast, too, and omg, that was super! fun! I think he survived on avocado for about 2 month before his 1st birthday (still nursed a bit, but not enough to sustain himself, and refused any type of bottle).

Hopefully this is just a little blip in the journey and once the growth spurt is over, you'll be feeling less anxious about it.