Ben took the kids to a low-budget Santa lunch at the Y last week, the same one we visited last year. He didn't mean to take them, but he was there with them for ballet class and he noticed Santa, so he decided what the hell-- hot dogs and cheetos rock. I don't have any pictures (because it was a spontaneous trip), but when I came home from campus, the kids came bursting out of the laundry room to meet me in the garage and tell me all about it.

Harry screamed exuberantly (because that's how he talks all the damn time) that he! saw! Santa! And told him what he wants for Christmas! Again!

Jack was a little less enthusiastic, saying "Yeah. Santa. Me a little scared." He did manage to scream "Dora's house!" at Santa from across the room. 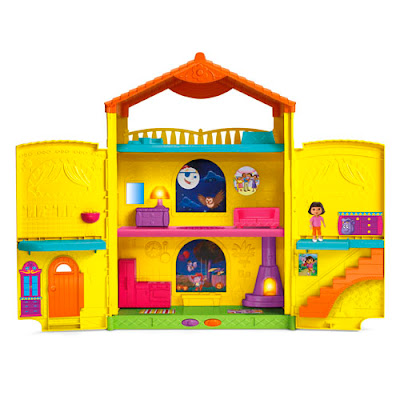 and only this for Christmas.

He walks around the house with the magic wand from their wizard costume, pointing it dramatically in the air and yelling "Dora's house APPEAR," then he waits for the house to show up.

This morning, he woke up at 5 and told us, "Me no sleep all night. Me dream about Santa. Santa here? Dora's house downstairs?"

He's very concerned that Santa is not actually going to bring him any presents. Sometimes we say that Harry and Jack have to be good boys if they want Santa to come (which is so freaking silly because Santa finished his shopping weeks ago), but it was the Dora Christmas episode which featured Swiper squarely on the naughty list for stealing everyone's shit all the time that has Jack really freaked out. Whenever we tell him no or tell him not to do something or yell at him for biting Harry, he gets right up in our faces, moving our heads to look at him if we aren't already and says, "Me naughty list?"

When we grudgingly assure him that he is most likely still on the partially nice list, he's back to the "Dora's house APPEAR" nonsense. 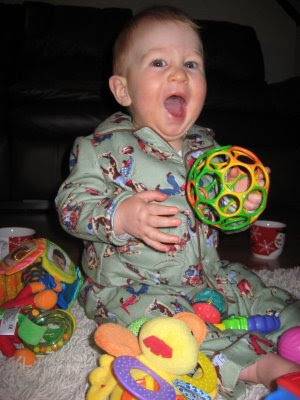 and last Christmas (when Ben got the truck he always wanted) when he was woken too early by a hyped up Harry and still didn't know what the heck was going on (and was still a bottle drinker, if you can believe it-- he's such a little man this year) 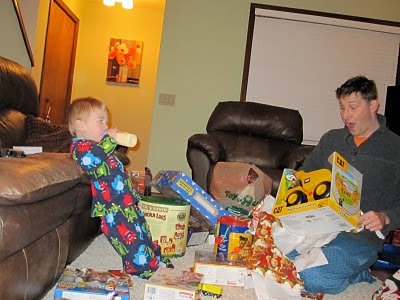 In other words, I cannot wait for Christmas morning because he's going to be so excited! (For 3 minutes. Then he'll probably want whatever toy Harry has opened, and a huge fight will ensue and the tree will probably get tipped over and I'll be so busy breaking it up that I will burn the monkey bread.)
Posted by Sarah at 11:18 AM

Ha! I love that he physically makes sure you're looking at him. :)

I also can not wait for Julia to open all of her presents this year. Elisabeth is concerned though--Julia is the sloooooowest present opener in the universe.

I hope it's a good Christmas :) Those boys are just so cute.

I am also anxious for Christmas morning to see the girls when they open stuff they have repeatedly asked for.

I am looking forward to pictures of Jack's face when he opens the house!

"When Ben got the truck he always wanted"

haha! I love that he's so into that Dora house! I cannot wait to see the picture of him opening it!

Sarah, you crack me up. I really need that today, so thanks!