SInce I last blogged, I think I have gained 46 pounds, mostly because of the Dark Chocolate Stars from Trader Joe's, but also because we are under a blizzard warning, which makes me bake and eat heartily. Today, I made a fantastic crockpot beef and sweet potato stew, and I made blueberry streusel muffins from scratch. The muffin recipe (that I used my iPhone All Recipe app to retrieve at TJ's) claims they are 383 calories a pop, and they're worth every single buttery one, I tell you what.

Jack and I headed out before the storm to hit the library and the grocery store (I grabbed a book haphazardly after Jack crapped his pants but before we went to the car to get an ancient Pull Up from my gym bag and while I was whisper-begging him to use a quiet voice and he was shouting "What?" and it's a great read-- I read 200 pages in an hour this afternoon. It's called Saving CeeCee Honeycutt, and I think you should all get it pretty much right this second), and Jack had a bad time. First, his favorite book was checked out at the library. Then TJ's was all out of mini-carts for him to push. Finally, to add insult to injury, the juice sample was hot apple cider, and Jack HATES hot beverages. He recounted his tale of woe to the cashier ("No doggy book at library! No kids share little carts with me! Juice hot me no like it!") who gave him an extra long strip of stickers.

We spent the day eating, playing, and waiting for the snow, which didn't start falling until after dinner. (All of our planned activities were canceled, and I just got an email saying our church is closed tomorrow). 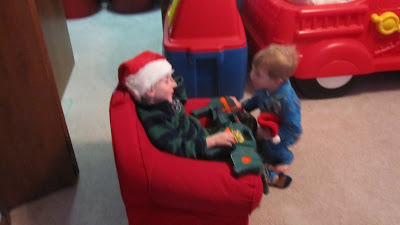 Here's jack passed out suddenly on our bed while the rest of us surrounded him. I love how he can just fall asleep whenever he wants in the middle of anything. Just like my dad. 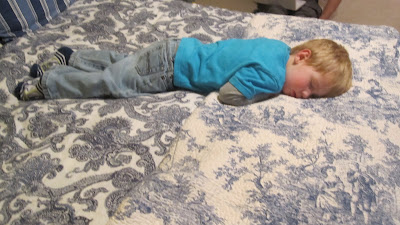 Ben and Harry started our snow day with a big breakfast, then Harry kept vigil until the white stuff finally started to fall, about 4 hours later than originally forecast. 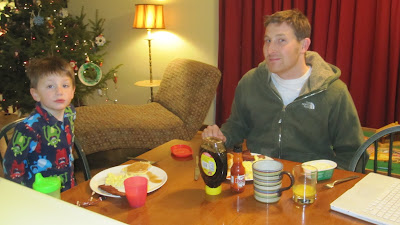 After dinner, we played outside until bedtime-- here are a few shots of the blizzard's gentle beginning. Tomorrow, when it's a high of negative 1, this won't be so magical. But tonight, it was snowball-fighting, angel-making, flake-catching fun. 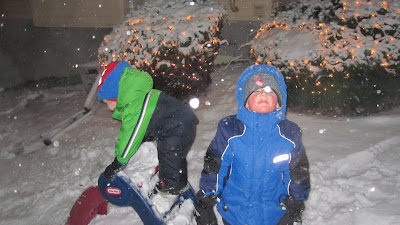 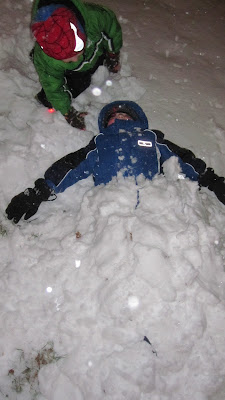 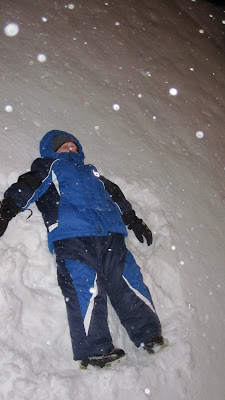 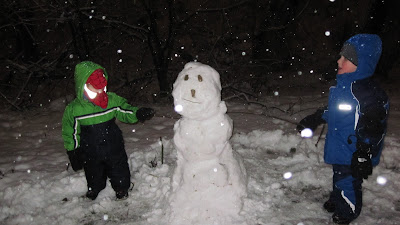 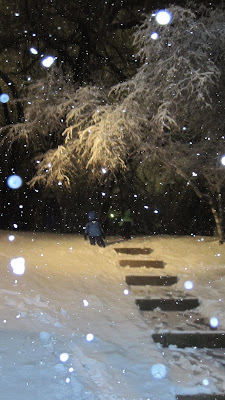 I love your day. That is all.

How much fun! I start baking when we get into the seventies here. When it comes to seasons I take what I can get. I love, LOVE the picture of Jack sleeping. What a sweetheart!

An inappropriate, gun-toting Santa...I can not tell you how much this amused me. :)

No blizzards here. It's snowed twice so far. This week is going to be in the 60s. Elisabeth is kind of disappointed since we'll be moving to Texas next year and this might be our last chance for a snowy winter for a few years.