The good news is that Pillow Pets wash up just great

I was going to start with the line, "Not only did I have a hairday so bad it looked like I was wearing a wig-- and not a good wig, a wig that looks like a wig or even a toupee," but my hair didn't photograph badly enough to do the line justice, so I was a afraid you would think I was fishing for hair compliments, which I wasn't because my freaking hair looked like a boxy old wig. (and I said wig 5 times-- ha!)

On the bright side, I got all my Chrismukkah cards mailed with either Hanukkah or holiday stamps, depending not on what holiday you celebrate but where you fell in the pile of cards I was holding. But this festive productivity was only part of my be-merry-god-damnit mentality, and I forced a terrified Jack to take a picture with Santa just so I could fill the empty frame on my mantle and cross another holiday task off my list. (Presents? Bought. Wreathes? Hung. Cards? Mailed. Holiday music? Mixed. Weight gain and self-loathing spiral? Spiraling.)

Look at how tightly he is grabbing my coat 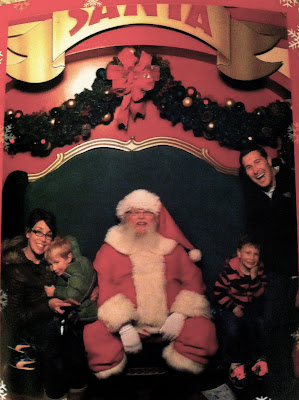 We figured that the best way to celebrate the first night of Hanukkah was to take our blended little family to the grimy mall Santa, natch. Harry was super stoked. Jack sobbed in line (not actually a line, just a wait for Santa's photographer helper to come back from the can), clung through the picture, and shouted at Santa as Ben was paying for our picture package (WTF?? All we wanted was a single 3x5, and we had to buy 5x7s and wallets to get it) "Me want Dora's house. Kay? Deal?" 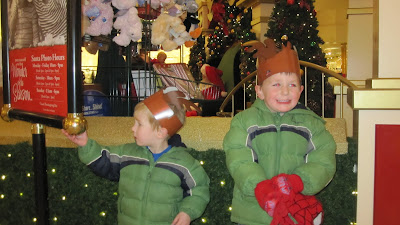 We drove separately to the mall (because we like to consume as many natural resources as possible at all times. It's a family thing. Between us, my parents, and my brothers, we took 4 cars and an airplane to Thanksgiving in Des Moines), and Ben took the kids home to fold laundry and start dinner while I ran to the gym. They accosted me the moment I stepped inside, and I was forced to light the menorah before even removing my coat 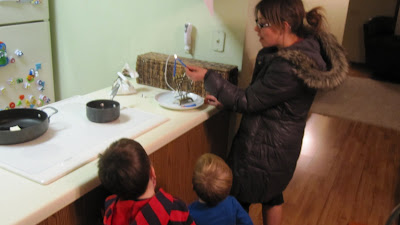 They opened paints and paper and settled at the train table to use them while Ben cooked and I fluttered around with a cleaning rag mopping up splatters. 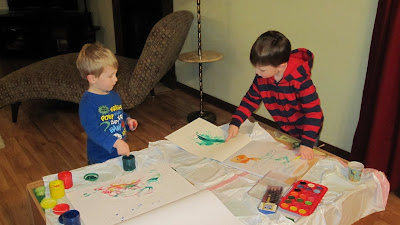 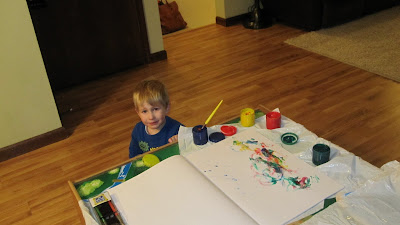 And right after I took this picture, he said "Uh-oh. Me puke," and hosed the room with vomit. This was 5:30, and he puked until 3:30 am when he switched to dry heaving for awhile. We washed every single sheet and pillow and towel we own; Jack had 4 baths, and he soiled all of his button-down or zip-up PJs. Ben slept in our bed with him (making him the odds-on favorite to win the who's next to fall pool), and I slept on the couch, listening to Jack crying and Ben running lots of water and thinking sleepily that maybe I should help them. Instead, I "slept" and then got up at 5 to be in my office by 7, so I could write a final exam, teach class, and grade before spelling Ben at home so he could go to some meetings.
This is Jack right now, finally a normal color (he turned GREEN) 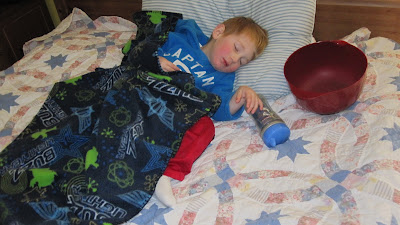 There was another pretty major bright spot yesterday, though. Helper Harry came to work with me, where he was instrumental in copying exams (he grabbed each one as it came out of the copier. There were 120) and stacking them. 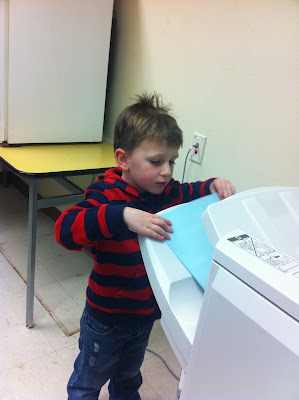 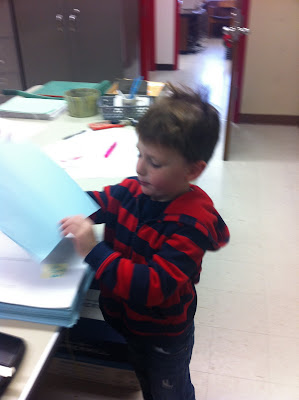 We also had lunch in my office, and Harry watched a movie on my laptop while I got a little more exam writing done. 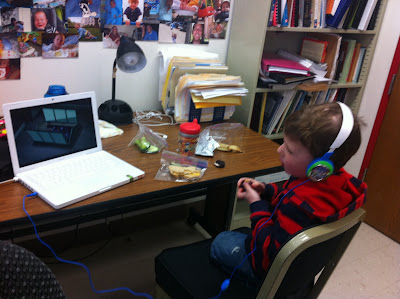 Cross your fingers and hope that that there's no more puke laundry in our future.
Posted by Sarah at 11:34 AM

Oh NO, not puking!! So gross. Not as gross as waiting for the next family member to start though. That's the worst.

Glad he's back to his normal color. Poor little guy!!

My kids are not so helpful when I take them to school with me. They won't let me walk five rooms down to the printer without coming along, for example, and they have to gather their toys to take with them for the thirty second walk.

OMG I feel your pain. It's the worst when a kid is puking. They always look at you like, "WHYYYYYYY Mommy? WHYYYYY?" and then they yak again.

I hated the one bout of stomach bug we have had enough to not want to see that ever again! Hope everyone is feeling well.

My son puked (for days) after meeting Santa, too! That was the first and only time we've let him sit with germy Santa. Big fan of your blog, just found it recently!

Poor Jack!! the puking is the worst! Ethan's only had it once but it was a night I will never forget.

Harry looks like a fun little helper. love that kid!