Lately I find myself agreeing with Sarah Palin,

which is totally freaky, right?

But I found myself nodding in agreement when she said that Boehner has been sobbing like a baby in a way that would never work for a female Speaker.

You know, she's been saying that the government needs to stay out of our kitchens and cafeterias and complaining that newly signed child nutrition legislation means we're living in a nanny state where parents can't bring cookies to school. Her characterization of the legislation is totally wrong and stupid, but I am with her on the cookie thing. Sometimes, kids should have cookies. I say this because Ben and jack went to a preschool holiday party for Jack's class, and they brought super cute snowman and santa frosted sugar cookies. That were never served at the party. Ben found them boxed up on the back of the stove and got one for Jack, who was asking if he could eat them and share them with his friends. WTF? And it's not like these people were food purists-- they gave the kids HFCS-laden fruity Cheerios, and they offered HFCS-filled Aunt Jemima syrup for the pancakes and had non-organic blueberries. All things I wouldn't normally feed my kids but also wouldn't shun if brought to a party I was hosting.

Cookies? At a party? Way out of line, I guess.

Here's Jack dressed up for the big day: 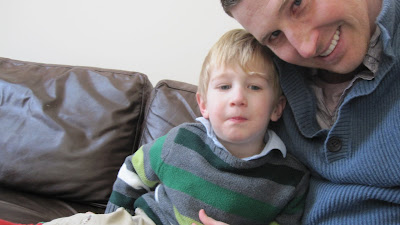 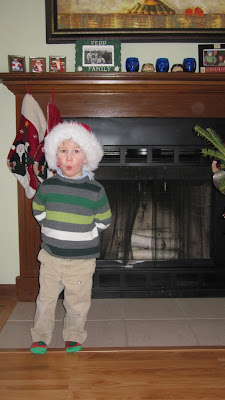 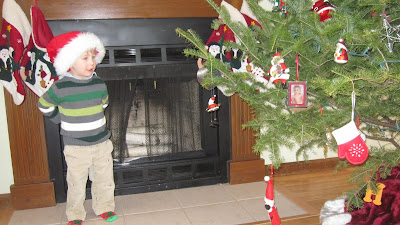 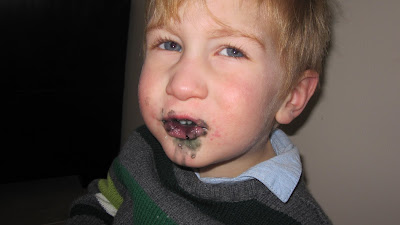 Were they prepackaged? Or homemade? I know at both our schools you can only serve food if it's prepackaged because of the peanut nazis.

(Also just laughed my ass off because my verification word is boxpokey. I am punchy today.)

That is so sad! But, it would have to be more than that to make me agree with Sarah Palin! I am sure these people at the school are well intentioned, albeit ignorant of childhood nutrition. While Palin is snarkily trying to gin up the Know Nothings."Yeah, get the government out of our food! We want an unregulated food industry!" She thinks we are that stupid.

I have major parenting fails no matter what I end up brining - so I'm sort of resigned to the fact that it's either not going to get eaten or someone is going to be annoyed that it's "junk".

I gasped at the title of your blog and my heart stopped.

I doubt she's so much worried about the government being a nanny state about nutrition as much as she just hates that Michelle Obama is in charge of the whole healthy eating thingy and is a much better dresser than Sarah (and a better speaker...).

Ebeth wanted me to make banana bread for her birthday treat. I was informed I could not bring in my homemade banana bread so I ran out and grabbed oatmeal cranberry cookies. Elisabeth informed me that her teacher had to call the principal to see if it was ok if she served them since they were cookies. I was pissed.

I was wondering what Amy was wondering. At our elementary school, you can't bring anything that is not pre-packaged...for all kinds of reasons I don't understand.

At our Jr. High, you have to have a food handlers permit to serve any food that isn't premade or comes from a pizza joint. As PTA members, we have to get food handler permits to have a spaghetti dinner.

I should have mentioned that the party was at someone's HOUSE.

And that the cookies were from a local bakery that discloses all ingredients b/c of allergies and only uses whole foods-- sugar, butter, eggs, flour, etc.

Boehners sobbing is so oddly interesting! What's that about? Its not just a few sentimental tears. Makes me want to walk up to him and yell his trigger words to see what happens. When Molly was little, the school district said they were trying to thwart allergies and hepatitus. I was fine with it cause we did have a local restaurant linked to a hepatitus outbreak.

Yeah, we're not allowed to bring cupcakes or cookies for bdays to Ethan's preschool b/c then "the kids will always be eating junk food in school"---there are 13 kids in his class and a few of them have bdays over the summer. Soooooo, maybe 10 days out of the school year, they'd be offered a cupcake at snacktime to celebrate a birthday. Annoying.