Apparently Santa thought that 2011 should be the year of brother-on-brother violence-- the kind that might put a brother in the ER or leave him concussed-- because he filled Harry and Jack's stockings with both Light Sabers and pointy Harry Potter wands. 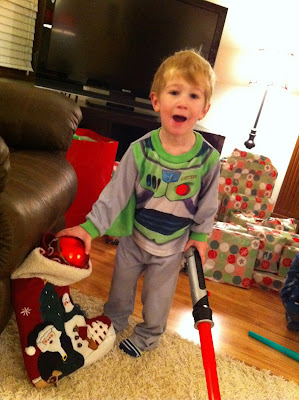 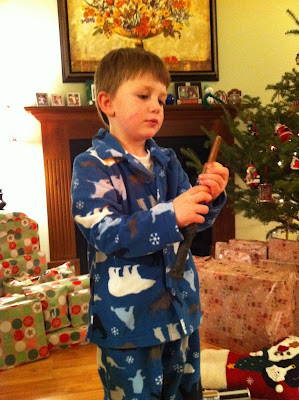 Jack loved Tangled so much, we had to buy him the horse (much, much girlier in toy-version than he is in the movie) and the girl. 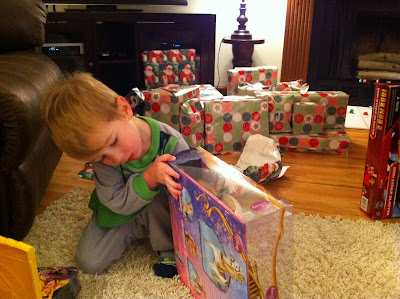 I don't know what the hell Harry is doing here, but it looks magical 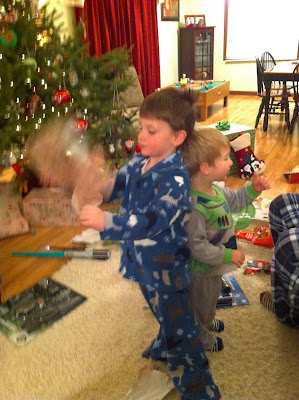 This picture made me laugh because Harry is dutifully holding up a gift for admiration and picture-taking, but he is also keeping a very careful eye trained on his brother, scoping out Jack's presents. 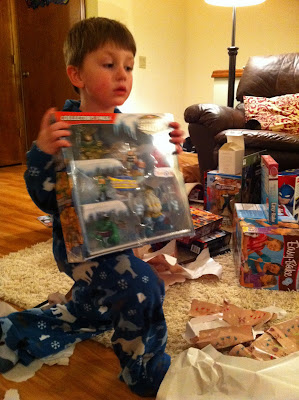 Jack, seen here lovingly petting his pretty horsie, was a real pain in the ass on Christmas morning because he wanted to play with each toy-- like full-on, out-of-the-box play with it-- before unwrapping the next. Meanwhile, handsy Harry wanted to OPEN! THE NEXT! PRESENT! 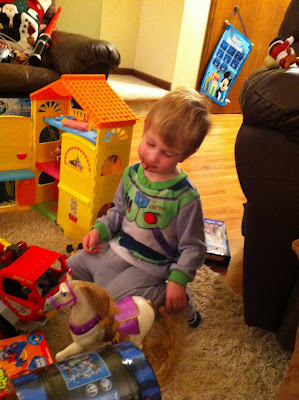 We were worried that he would stall out gift opening with Harry and his cousins until tantrums of epic proportions occurred, but the grownups devised an ingenious gift-unwrapping system where the four big kids each opened a present simultaneously. Then everyone paused to appreciate each other's gifts (so the parents and grandparents could see each one and take pictures) before there was a mad dash to choose and open the next present-- it was really fun.

While the big kids did that, baby Jacob did this (He is the happiest little baby in the world-- and so cute, and he smells good. I didn't even mind when he missed his bib and spit up all over me-- that's how cute he is) 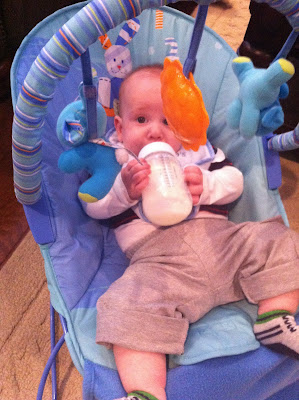 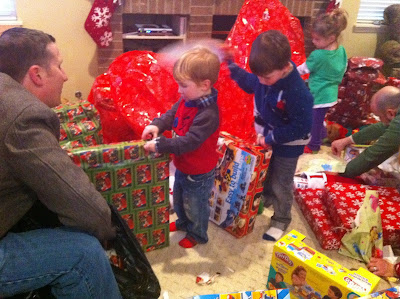 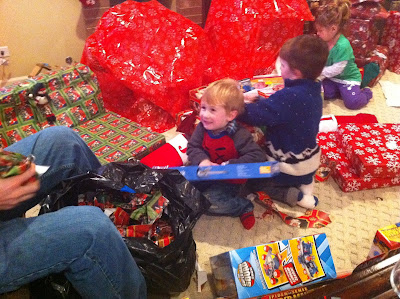 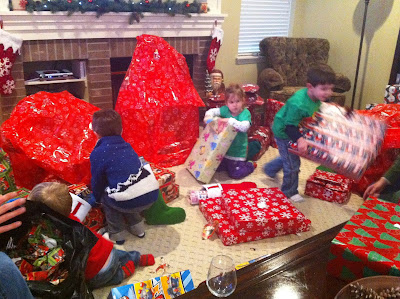 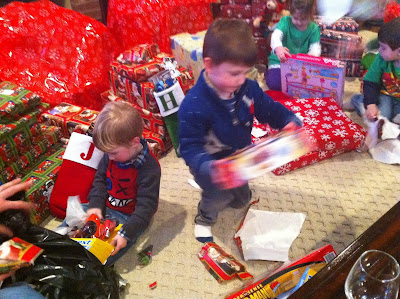 All the kids played happily for the rest of the night, Max and Harry "fighting" with their super hero battle ships and Jack and Lucy talking to each other in sugar-sweet 2-year-old voices. 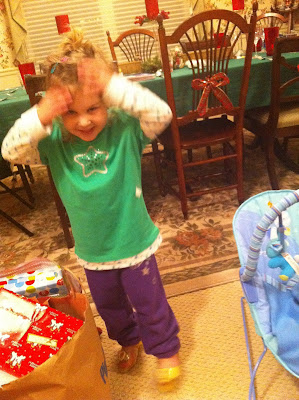 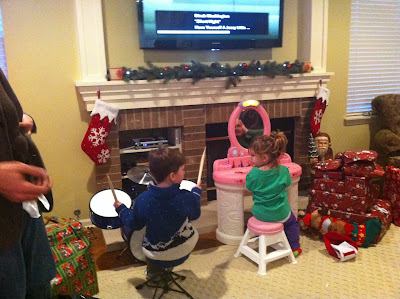 Harry and Jack even slept in until after 7 this mrning-- a Christmas miracle for sure. I'd say "the end," but I have at least one more post's worth of picture languishing on my camera. Unfortunately, we are on our way out the door to go to Toys R Us (I know-- don't we own the whole store already? Yes, we do, but Harry's spy video watch-- the number one thing on his Santa list) got broken when Ben got rammy taking it out of the box. Luckily Santa leaves Toys R Us gift receipts), so more later! Hope your holiday was merry. Ours certainly was.
Posted by Sarah at 2:22 PM

Looks like chaos! The good kind, of course. I love two-year-old voices too.

Sophie opened two presents, and then sat happily playing with them (as well as part of one of Izzy's that she decided was hers) and refused to open anything else. I opened the rest of her gifts and just put them in a pile while she sat there with a death grip on her new Princess barbie. next year I'm only getting her two things.

Love the pics - glad your Christmas went so well!