The other day while Jack mercifully napped, I had to turn off the TV because I was afraid Harry's brain was going to literally rot out of his head because I worked on my NaNoWriMo book when we first got up, letting them watch whatever the hell they wanted.

This was quite a bummer, actually, because I was hoping to nap a bit myself while the TV babysitter did her job. I didn't know what the heck to do with Harry, especially because 85% of his toys were in the room where Jack was sleeping.

Harry, though, had a perfect solution to my activity dilemma. I sprawled on the bed, and he pulled out a bunch of old picture albums and flipped through them and exclaimed how cute he was when he was a baby-- for an hour. I might have dozed a bit even. And when woke up, he might have been sporting all of his old Little Gym medals that he pilfered from his baby book. 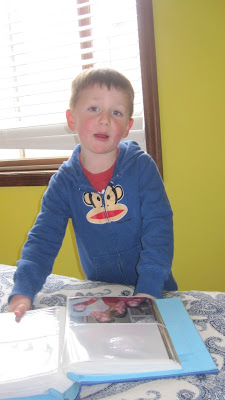 He was cracking me up. Even fairly recent albums (which are actually not that recent because I have thousands of pictures in a box in the cabinet under my desk, pictures that I print out every week at the Walgreens by my office and then shove in a dark cabinet, which really doesn't make any damn sense, now that I think about it) elicited it a "I was so little!" or "Look how cute I am!"

It's it freakish how quickly you forget how little they were?

How fun! My albums are called "Charlie 6 mos" and "Wes 1 mo", respectively. Taco's going to be lucky to get a week.

I love when Elisabeth starts sentences with, "Do you remember when I was little, like 5?" Yes, because 5 was sooooo long ago.

And you are right. He is little and he is super cute.

so cute. This weekend we just (finally) hung up all of the family photos that have been in a box for over a year since we moved. They love playing the "who is that baby?" game. usually they think every baby in every photo is Sophie since she is the only one they remember being a baby.

it is always amazing to take that little step back and remember just how little they still are. even though they seem so big and grown up compared to how they were just yesterday.

AJU5 loves to look at the pictures of her on our computer. She is finally starting to realize that they are her and not AJU6. It is fun to see their reactions to older photos!