It used to be that Harry and Jack were always fighting. Seriously, if they were in the same room with each other for 2 minutes, they;d be screaming, hitting and biting. I was spending half my day telling them to knock it off, and it was making us all tense. Lately, though, they have been-- wait for it-- getting along with each other.
Here they are the other day playing in their room. They were happy the whole time I put the laundry away, and I even had time to lie on my bed and look at the internet until I was discovered. Even then, they weren't fighting-- they just wanted me to read to them which I did because I'd be a pretty huge asshole if I didn't, right? 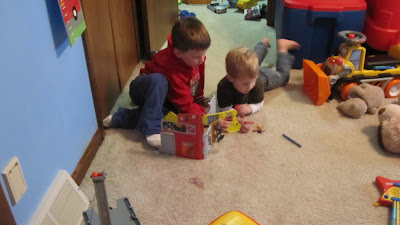 Today, we found a Playmobil race car set that must have been forgotten after the toy fest that was Harry's 4th birthday. It was in the box and everything. After I assembled it for them, they played together for almost an hour-- and they only stopped playing because they wanted lunch, not because someone was bleeding or something terrible like that (which has been why they've usually stopped playing). When we opened the package, harry even said, "Oh good! There's 2 cars inside so we can both have one." So nice (and weird). 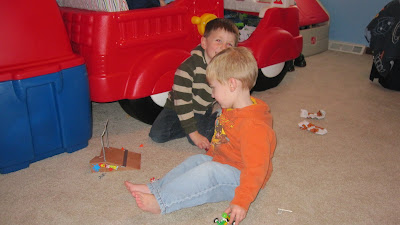 They still fight-- don't get me wrong. The minute I turn on the shower and step inside and unwrap a fizzy aromatic lavender shower capsule, in fact, they fight. I'm so happy for the moments when they play together, though. It makes my job a heck of a lot easier.
Posted by Sarah at 7:44 PM

I have always been really lucky that my kids play together really well. Everyone i know with kids close together like mine, have had problems with fighting - but they also have boy-boy or girl-girl siblings. I'm convinced that my kids are such great friends and fight so little right from the start because they are girl-boy-girl.

In case you were wondering about my random theories, lol.

So glad they are getting to be friends and giving you a break. Playing together and leaving mommy alone is the whole point of having more than one kid!

Gosh I hope mine stop trying to kill each other soon. You guys are usually about six months ahead of us, so maybe this summer?

At my sister's this afternoon they took turns tackling each other to the ground and head butting over who got to get the balls out of the pool table.

We go in spurts here, although everybody likes to play nicely with Maeve. Probably because they can boss her and take toys from her and she laughs and smiles.

I did actually see some nice behavior last night while they played in Jack's room while I put Maeve to bed. I started looking around for a yeti, because clearly, mythical things were afoot if siblings weren't yelling and fighting.