Today my mom turned 58, and we spent the weekend in Pekin to trash her house and dirty all her towels and sheets, uh, I mean celebrate. 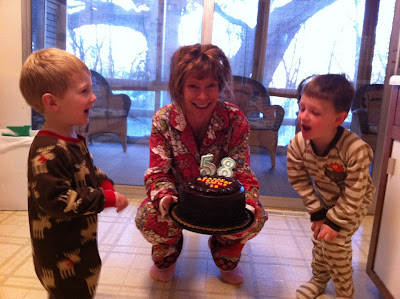 On Friday, we took the kids to Mineral Springs Park, and Harry was playing with a group of older kids. The kids looked to be about 9 or 10, and I figured he was okay as long as they were nice to him. Harry does this really annoying thing where he puts his fingers in his mouth and screams shrilly at the top of his lungs and claims to be whistling. He did that several times to the boys, and one of them was particularly bothered by it. He said, "Knock it off!" really loud to Harry and then commented to his friends, "If he doesn't shut up, I am going to get him and make him stop."

Harry ran by me, giggling, "He's going to get me!" In Harry's world, this means someone is going to chase him and tickle him, but I kind of thought these kids had something else in mind.

Still he impressed them with his lack of fear when it came to jumping off the jungle gym, and he stayed close to the big boys for a few more minutes. I heard them talking loudly to him, though, and went over to the rock wall just in time to see one of the boys jump onto a railing so that both of his big feet were inches from Harry's nose.

Harry turned bright red and came over to the smaller play structure, the one that is designed for 2-5 year old, to play with me and Jack. 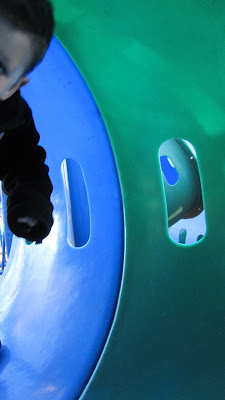 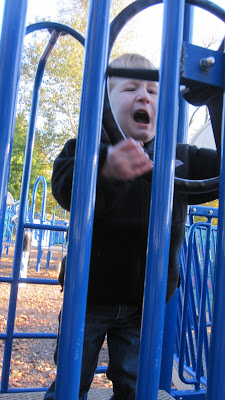 Saturday, my parents took the boys to see Megamind in the morning, and Ben and I went to Bradley to see our old speech friends because BUST was hosting its annual tournament.

In the afternoon, Ben and my dad and I took them bowling. 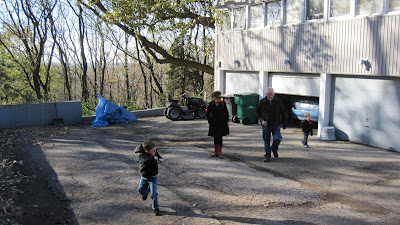 Which? Will be fun in like 2 years. Nw, it is about 6 frames too long. Even with bumpers.

I especially liked how both kids put their fingers directly from the ball holes into their noses and mouths. Harry was eating a bag of Cheezits with his filthy bowling hands, and I noticed that on the bench next to him was a discarded band aid. Blech. 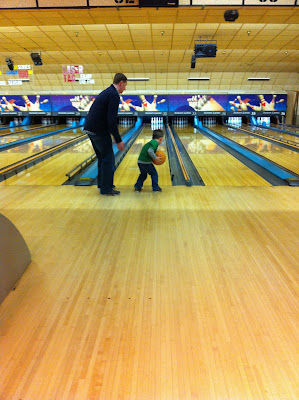 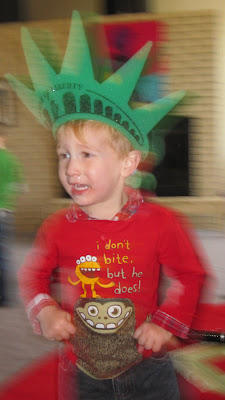 We took my mom out for dinner at our old country club, the place where I spent all my summers and that has become a public golf course, ripped out the tennis courts, and FILLED IN THE POOL. So sad. But they opened a new pub in the old restaurant area and it was really good and made us nostalgic. 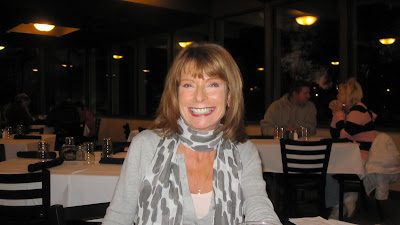 Back at my parents' house, Harry and Jack demanded my mom open her presents even though her birthday is today. 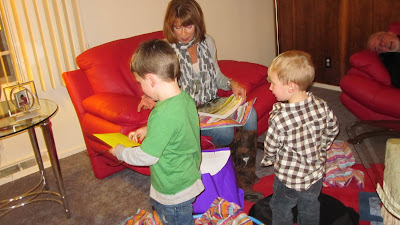 This morning, we celebrated with breakfast cake and the holiday Target catalogue 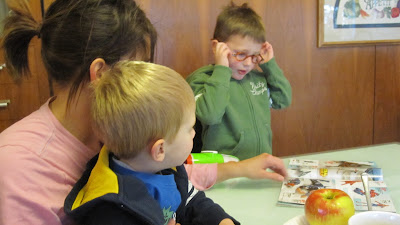 On our way out of town, we stopped by Bradley again to squeeze a squishy baby our friends had over the summer and let the boys nearly vandalize some sculptures on campus. 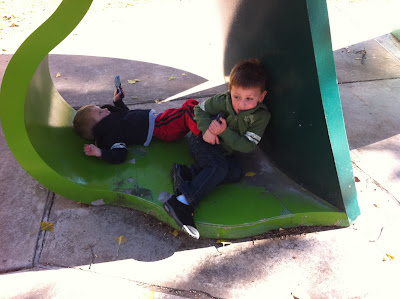 I even got to eat my favorite sandwich from Fedora's Pizza & Deli, the best restaurant in the universe.

An excellent weekend all around.
Posted by Sarah at 8:34 PM

Ah, Pekin. Your post made me wish they had screening for those who play at their parks. ;)

Happy birthday to your mom who does NOT look like she's 58, so I feel you are all lying.

I love breakfast cake. Looks like a fun trip!! I love how Harry lied about his age.

First, the boys just keep getting cuter and I agree that your mom looks way to young to be pretending to celebrate 58.

Second, still so love your parents' house and I'm having flashbacks of having cast party in your basement and one of our dads bringing us spinach pizza from Fedora's.

Why oh why can't they have long distance delivery on that holiday sandwich, so tasty.

What a fun weekend! I love that you totally busted Harry. Cool that he pulled it off though. Wonder where he got the idea?

What is it about the Target catalogue? Eli's been carrying it around for a week.

The playground story - so funny. AJU5 plays with anyone a the park (if they will let her). Luckily we go during the day so most aren't too old (or are homeschooled and have younger siblings).

Sounds like a fun birthday for your mom too. Wish we "did" birthdays that well!