Oeddie and his brother the daddy's boy 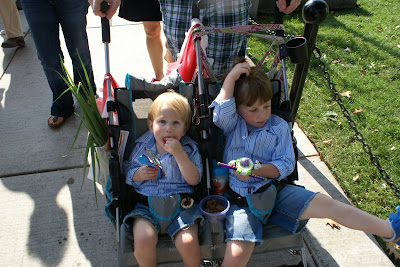 Yesterday as we were rushing to load the car to take Harry to school, he gasped when the garage door opened to reveal swirling leaves. "Mama!" he exclaimed. "There's fall colors on were ground."

He meant "our ground," but he says "were" when he means "our," and this Harryism, along with the occasional "w" sound when he should make an "l" sound, is the last vestige of his baby talk. Soon we will miss "were" the way we miss markies and muffies and mimmens and gaupeen (vacuum) and blablablablabla (banana). We'll remember it like we remember when he called himself "Ha-ee" and when his only words were "this," "that," and "get it." Before we know it, "Dada" will be Dad and "Mama" Mommy, then Mom, then just-drop-me-off-on-this-block-before-my-friends-see-you.

Harry and Ben coached speech last night, so Jack and I hung out at home (where Jack got an unfortunate bang trim in the bath tub just in time for pictures on Saturday). At the end of his milk and Aveeno scented nighttime routine, Jack finished his bottle, brushed his teeth, and told me he didn't want to read another story. Instead of burying his soft head on my shoulder, which is the universal Jack sign for bedtime, especially when it's accompanied by a sweet little "Nigh nigh?," he stared at me expectantly. I stared back at him. He put his fat little wrists together and fanned out his palms. "Dada?" he asked. Dada is on campus with his students, I told him. You'll see him when you wake up. His face crumpled. "Daaaadaaaaaaa," he wailed and was still crying quietly when I tucked him into his crib.

Jack sleeps with Harry's old stuffed Buzz Lightyear doll these days because Harry has another stuffed Buzz Lightyear doll that his grandparents found inexplicably stashed away with Ben's old college stuff. The night Jack discovered Buzz in his crib, he happened to be wearing his new Buzz Lightyear PJ's, and he grabbed the doll, pushed the red button on its chest, and then pushed the red button on his own pajama shirt. He squealed with delight, clasped the doll to his heart, and was still clutching it an hour later when I tucked Harry in.

Harry, I said. Thank you so much for giving Jack your old doll. That was such good sharing. "Yeah," Harry replied barely glancing up from Wow Wow Wubzy. "The paint is coming off his eye, so it doesn't look the same as his other eye, and it creeps me out. So Jack can have it."

Last night after Harry and Ben came home, Harry took a shower and bossed Ben through a complex game of Buzz Lightyear and army men played with the toys he set out for that purpose at 9 o'clock in the morning. Then I took him upstairs to read bedtime stories. After we finished our books, Harry turned to me and said, "When I grow up, I'll be somebody's dad. I think I'll have students like my dad. but I won't take my baby to work. I will call Jamie to watch my baby. But I'll have to use my dad's phone. And I'll need his wallet. Also his car."

What will your dad drive? I asked Harry.

He thought for a minute. "A van," he decided. "And I'll live right by were house, not anyplace far."

Where will Daddy and I live? I asked. In our house that we live in now?

"Vans are big," Harry told me. "But you can live with me in my house. You can be the mother," he said.

Only he didn't say mother. He said "mu-yer," and when he nestled into my arms to finish drinking his milk, I patted his little marshmallow cheek, holding my baby just a moment longer.
Posted by Sarah at 1:19 PM

so sweet. it is amazing the things they think of and how easily they can break your heart from the love and pride swelling in it

They're growing up so fast. I will miss the baby talk too!

I love how Harry rationalized his sharing!

That's so cute! It does kind of break your heart, though, doesn't it?