His lips are sealed

Coming home from the gym at 10 to 6 this morning, I was treated to a bed full of Buzz Lightyears. Usually, I come home to a bed full of sleeping and about to be henpecked awake husband, so this was a nice surprise for all of us. 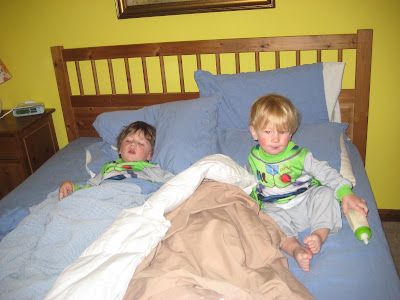 I have always been a morning person, but this 5 am crap has to go. Unfortunately, I think it's here to stay because I have no other possible second in my day to exercise, and, truth be told, I am not too keen on the germy gym playroom now that cold and flu season is upon us (and the boys officially have their first back to school cold which they have nicely shared with Ben and me).
Today was another first day of school, so we took more pictures, hoping they might turn out better than yesterday's. But, as you can see, they did not. Also, you can see that the Zac Effron hair is making its debut on the preschool scene. 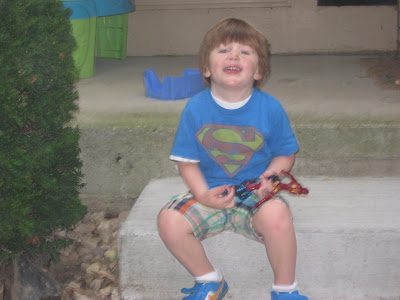 Ever since I drove away with my camera on top of the car, it's been taking kind of shitty pictures. Also, now that I think about it, I don't think I have a flash anymore. Damn it.

This cart? I yelled at this cart at the bakery when it got stuck between a rack of pre-packaged baked goods and the edge of the cake fridge. (I want a cake fridge at home.) Then I yelled at the old man grocery bagger who said I could not take this cart outside to the parking lot because it didn't fit in the cart return stalls. How am I supposed to get 60 pounds of kid and three boxes of donuts to my car, then? I asked. Are you going to help me? He offered to help me, but I felt like an asshat for yelling at an old man, so I refused, and we struggled our way to the car, me balancing the boxed donuts and Jack and Harry carrying the bag containing the boys' long johns and holding onto Jack's fat leg because I was out of hands. 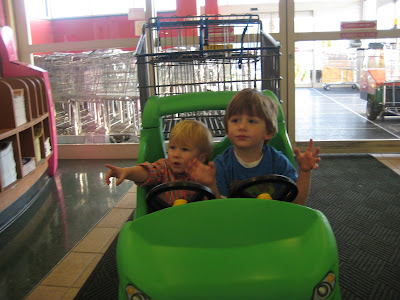 The donuts were for the Welcome Wagon room at Harry's new school, but he and Jack had a little impromptu long john picnic before we went in. 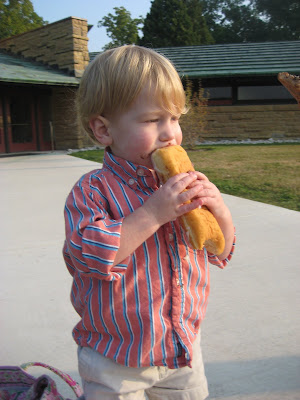 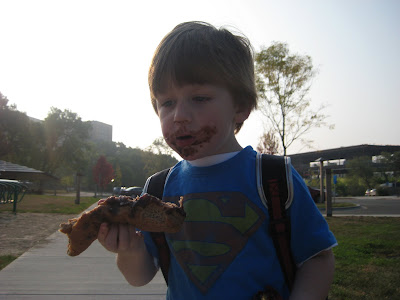 Harry's been fairly nervous about school. Today, he insisted upon Incredibles underwear, a Superman T-shirt, and his red and blue Ironmen to keep in his cubby. Protected by these superheroes, he didn't cry or cling or even really look over his shoulder at me when I dropped him off. He just washed his chubby hands in the tiny sink inside his classroom and began to very seriously pile PlayMobil people in a Little Tikes minivan (I know because Jack and I spied on him through the courtyard) 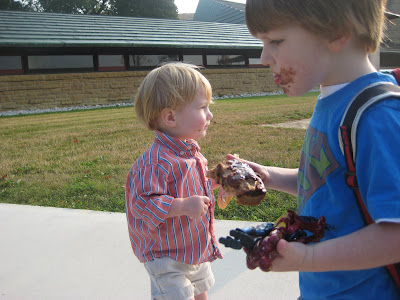 Of course they both got baby wipe sponge baths before we went inside. 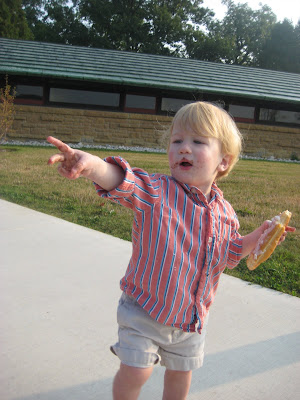 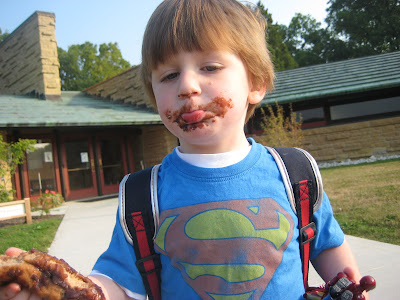 He came home with cheeks so red they were purple and with sweat soaked hair (that feathers really awesomely over his ears when it's wet), but he remained tight lipped about what he did all day. He responded to all of my questions (even the absurd ones) the same way, with an imperious, "Mama, I am not going to tell you that."

Oh! One more thing! Reading Gina's blog about Bella's first day of school, I forgot to mention that Harry has homework! How cute is that? His Spanish teacher sent home lots of adorable worksheets for us to complete with him-- so, so cute.
Posted by Sarah at 11:26 AM

Homework? That is adorable.

When you said Long Johns I thought you were talking about thermal underwear and I was counting my lucky stars that I live somewhere warm. But I figured it out.

I love that he goes to two schools---think of all the birthday parties!

I would have given up on exercise completely - 5am is way to early these days! But, then again I did do it for about 5 months about 5 years ago... Good luck!