Last night, I ate my face off while watching the Biggest Loser, like an a**hole. Last night, like an a**hole, I totally lied to Harry about the time, so that we could pick up his ever growing basket of "night night toys" and just put him the eff to bed already because he was so hopped up on frosting from his school's 60th birthday party, we knew a crash was inevitable.

But by far the most a**holish thing I did last night was to NOT get my sick husband any ibuprofen when he woke me up with his frail whimpers at a quarter of 2. I didn't even turn off the fan when I saw his feverish shivers. Instead, I watched through a half-open eye while he stumbled out of bed and wrapped himself up in a bunch of sweaters thinking he was feigning patheticness because a pile of sweaters? Really? Why not a blanket? I asked him if he was okay, not really interested in the answer. He said no, he wasn't okay, actually. He thought he had a fever, and he had a headache, and he couldn't sleep at all. I offered to go downstairs and get him some ibuprofen, but he said no he was okay, he got some sweaters. I thought about leaving my blanket cocoon to get the meds anyway (I've mentioned that we like to sleep in a freezing house, right?) but then I figured screw him and rolled back over.

I didn't really think of feverish Ben again, except briefly at 3:11 when I asked him if he could stop rocking the bed with his chattering teeth and to please breathe in the other direction, so he wouldn't get germs on my pillow. When my alarm went off at 5, I reset it for 6 because I figured it was stupid to go to the gym and leave Ben home alone wit the kids if he was really sick, which I doubted because I never believe him when he says he doesn't feel good. I invariably accuse him of trying to get out of the housework and spend the day badgering him until he gets out of bed and just goes the hell to work.

At some point midmorning, he did throw his wrist to his forehead and offer to go to a hotel. And I almost took him up on it because germs on my pillow? Do not want.

I told him he could be sick for a half day on Saturday, but otherwise, there's no time in our schedule for sick time!

And that is when I realized what an a**hole I actually am, made him some chicken soup and Theraflu, and left him alone. Poor guy.

Ben and Jack on Sunday morning. As you can tell from the stripped bed, Sunday is a busy day and NOT A SICK DAY. 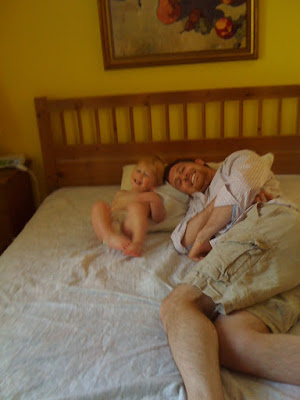 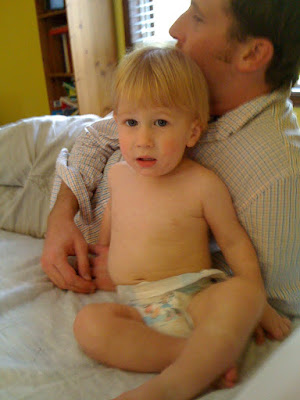 Here's Harry after swim class on Friday. He was soooooooo pissed at me for bringing this frog towel because all of his friends had superhero towels, and nobody else was subjected to the indignity of a towel hood. As if. I guess their moms aren't, you know, a**holes. (But really? Could this towel be cuter? I don't think it could-- but yes, he has superhero towels and Thomas towels that I will bring from now on. Jeez.) 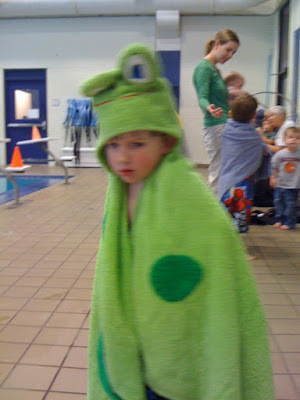 I am a giant bitch when Ryan is sick. I never believe him and then get pissed off when he doesn't take anything to keep him from coughing all night. Maybe now that our kids are a little more independent I can be nicer.

LMAO!!!We A**holes should unite. Eugene asked for a back massage last night and I performed so poorly he asked me to stop. Apparently, my half a** pat made an even bigger knot.

I am lucky that my husband rarely gets sick. It makes it easier to be nice to him when he is. Now, if he complains in the middle of the night - then he is on his own!

I love this post because my husband would literally have to keel over and pass out for me to pay the slightest bit of attention to his health. I never believe his alleged claims of malady, and just chalk them up to his belonging to the weaker sex. And the worst part is I don't even feel like an a@#hole when I get sick and he brings mne Tylenol and glasses of water and massages my third eye.

You're such an asshole.

Why are youbeing so self critical? Is it Yom Kippur?
Oh, nevermind......

I'm such an a**hole when Husband is sick. It happens so rarely I don't know how to turn on the "let me take care of you" part of my brain.