Okay, guys, for realz: how much do you pay for your vanilla? I balked at the $17 price tag @ Whole Foods yesterday, but a lot of my Facebook friends say they pay big bucks for their extract and beans. What about you? Is vanilla something to splurge on?

My mom gave me this recipe for zucchini bread, and it was FANTASTIC, so let me share:
2 cups sugar
3 cups flour
2 t baking soda
1 1/2 t cinnamon (I actually accidentally used cinnamon sugar, so I did 2 t of that and then another t of actual cinnamon when I realized my mistake)
2 t vanilla
1 t salt
3 eggs
1 cup oil
2 cups shredded zucchini
8 1/4 ounces crushed pineapple( drained)

Combine all of this, put it in a 9x5x3 loaf pan and bake at 350 for an hour (my bread was NOWHERE near DONE after an hour, so I turned the heat down to 325 and let it go for another hour-ish. It turned out perfect-- crusty on top and moist inside.)

Sadly, this bread looks super fattening, so I haven't actually had my own piece (but plenty of bites of Harry and Jack's-- in fact, I keep cutting them slightly larger pieces than they want to eat, just so I can snag the crumbs. Damn. I should just suck it up and eat some, huh, before I choke down waaaaay more than a slice without the enjoyment of actually eating it?)

My parents visited this weekend, and we had a blast, but I took almost no pictures on my own camera-- I did use my dad's a little, and so id he. My mom had her camera, too, so wouldn't it be great if they emailed me some pictures??

Jack loved walking into breakfast with his grandma and grandpa. 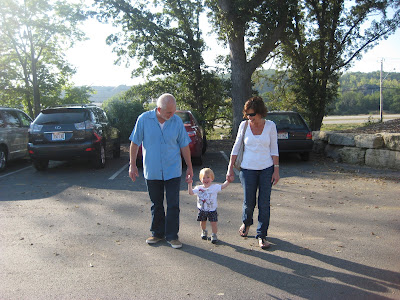 Swinging, though? Not so much. 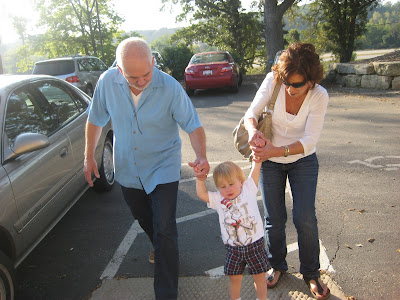 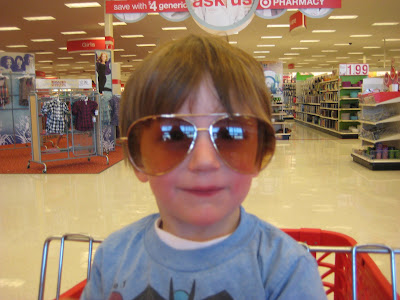 and Jack insisted upon this witch hat from the dollar bins 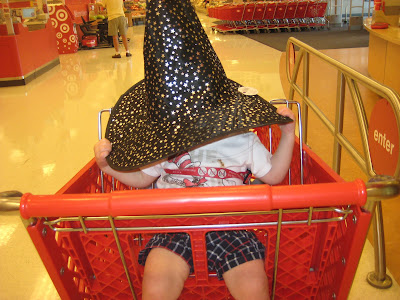 I had a bit of sticker shock grocery shopping this week. The organic prices at Super Target were so so, and the selection was PATHETIC (good deal on yogurt; a milk special, cheap Annie's brand convenience foods, some plums and oranges that look great), so we also went to Whole Foods, where 3.5 bags of groceries was easily as expensive as 7 bags at the regular store (and we already bought most of our produce at the farmer's market). So, yeah, a little disillusioned, but still making it work.
Sunday
chili
hot dogs
(this is healthier than it sounds, as there was a ton of veg in the chili, but I forgot to dice green onions to throw on top, which is unfortunate because we bought some seriously monstrous onions this weekend)
Monday
Ben has the kids, so he's making turkey sloppy joes
blanched green beans and snow peas w/ dip
apples (because we picked waaaaay too many apples last week)
Tuesday
Chili redux
Wednesday
Take out
Thursday
Chicken breasts
cauliflower
tossed salad
Friday
Cider rubbed pork chops
corn
tossed salad

Look out, though, because next week, we are breaking the slow cooker out of its summer storage. Wow, things are exciting around here.
Posted by Sarah at 10:27 PM

I'm glad for the fall recipes! I've had enough grilling. I made pumpkin bread and soup last night! And it's still in the 80s here. Awesome.

I will definitely be trying the zucchini recipe this week. We just got a KitchenAid so I'm all about anything that requires mixing. Also, please dish on your slow cooker recipes....we just started that up as well.

Okay Sarah--don't laugh but I'm not hip with the ingredient abbreviations. Is the "t" for teaspoon or tablespoon? Thx

no splurges on vanilla here. cooks illustrated/america's test kitchen says that cvs has the best vanilla extract even though it is immitation. it is less than $1. i know, who would have thought a freaking drugstore! i would rather drink a $17 bottle of wine than spend the $$ on vanilla but that's just me.

We've been trying the organic/5 ingredient thing, too. I find that Cub isn't as bad as Whole Foods for price and have actually stopped shopping at Target for food unless I am really wanting a Target brand....and to be tempted by purses, toys, clothes and a bunch of stuff I don't need :)

I am so ready to break out the crock-pot for full meals. I want to make some chicken and dumplings before too long!

I prefer real vanilla extract to imitation, but I don't spend a fortune on it. I actually think Trader Joe's has a good version, and the plain ol' McCormick's is good, too! Right now I'm working on an economy-sized bottle I bought on sale at Jenifer St. Market.