I have been pretty jealous reading about everyone's pre- and grade-schoolers starting school and because we're attending two different nursery schools (because I am a bad decision maker. Shut up), I have been to double the beginning-of-the-year meetings, open houses, and conferences, which has only served to further ratchet up my excitement. 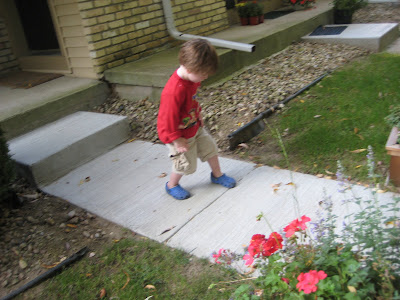 Before we went to the frenzied drop off (where I almost got stuck in my parking spot by some moron who igorned all posted no-parking signs because those signs? couldn't possibly be telling her not to park there because she had the most preshus snowflake of all preshus snowflakes in her car. and that preshus snowflake? was NOT old enough for the booster seat she was riding in. people are so stupid about carseat safety-- it boggles my mind), I made Harry stop stomping ants to take some pictures on the porch. 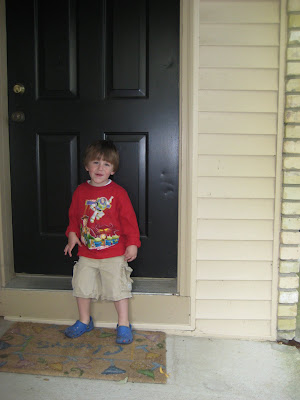 I told him I wanted to see how big he is, so he dusted off an old classic move (how big is Harry?) 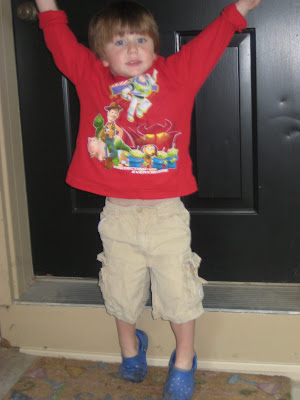 I asked him what he wanted to wear today, and he insisted upon this Buzz Lightyear shirt his grandma got him. Insisted upon it with such fervor, in fact, that Jack and I spent the whole time Harry was in school (besides our time on the big! red! mat!) shopping for more Buzz-wear (with limited success-- we scored some glee-inspiring Lightyear PJ's and a Woody T-shirt that received a rather tepid reception).

Did some neighbor kids throw rocks at our door? Looking at these pictures, I think maybe they did. 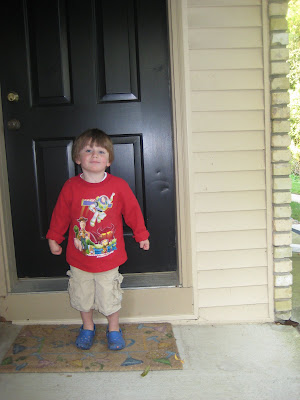 Also? Might want to think about storing the sand and water table for the season, huh? Especially since the water dried up months agao, and it's just a dusty spider playground. We're all about the curb appeal, people. 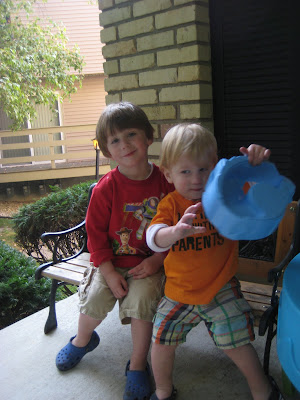 When we got to school, I tried to take more pictures of Harry with his backpack in front of his cubby. But I couldn't find my camera. Because I drove off with it on my trunk. I found it in the street when we got home. And that, my friends, is why I don't have nice things.

Oh! I took the pictures of Harry out front because I am going to take the exact same pictures of him at the end of the school year to see how much he's grown. I dream of compiling an entire album of first and last day of school pictures, from now through senior year of high school. I stole this idea from Family Fun magazine, by the way.

Here he was on the first day of nursery school last year: 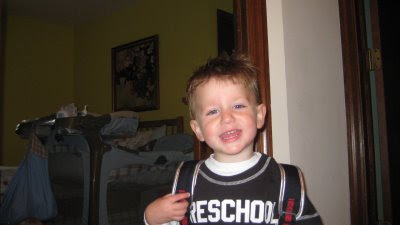 Senior year will be here before we know it.
Posted by Sarah at 12:16 PM

Look how different he is in just a year!

A perspective from a child-free household... :)

I'm having kind of a nightmare myself, playing at foodie while shopping just for two. For example, I've tried, in vain, for half the summer to buy one or two delicious local peaches instead of a half a peck. (Did I just say half a peck? OMG.)

The vendors at our farmer's market usually give price discounts on volume purchases -- very important to our budget these days. But with just me & the hubby, this leads to:

1. A mess of waste, like the 4-5 peaches I had to chuck after I broke down and bought the half a peck. Peach pound cake only saved a few from the bin. Also gave me sugar shock.

2. Exhausting days where I try to turn all that "on-the-edge" produce into freezables. Not that I'll be griping when I'm still eating homemade gumbo and spaghetti sauce in November.

That said, I can't imagine brandishing a chef's knife over the heads of spirited toddlers. I also don't know how I'd deal with the time commitment if I wasn't playing trophy wife (read: unemployed).

As my last four peaches sit on the edge of going to the bin, I'm thinking about running home to grandma's house to swipe that silly food dehydrator she bought in the 80's...

Wait, is that a good idea for portable kiddie snacks?

Love you guys! See you in P-town in November, perhaps?

Holy shit Misty, this almost made me pee my pants. I'm facebooking you right now

Aww, look at baby Harry!! Charlie went to two church preschools for his first year. It was confusing but nice and served as cheap daycare.

Sarah, how our lives are so similar. Couple things--I must commend comedy when I see it and that preshus snowflake bit is AWESOME!!!!

I too saw that article in Family Fun mag....great idea, huh? I also enjoyed the painted rock ideas.

I agree with Gina - the snowflake comment was great!

Happy day! Love that you found your camera--that's hilarious in a "thank god I'm not the only fool who does crap like that" kind of way.