We survived our last sports gauntlet Saturday!  Next week, we theoretically have 3 sporting events again, but we are thinking about taking the whole fam damily to Jack's soccer game because he hasn't been getting the same kind of attention as our beloved squeaky wheel and then heading to a pumpkin patch for mandatory fall fun.

We had a sushi and champagne cocktail movie night last night to enjoy The Cutting Edge.  (The boys drank Izze.)  Jack loves sushi, but holy cow is he disgusting when he eats it.  He eats all the grains of rice with his fingers and then unrolls the whole thing to pick out the salmon (his preference) or shrimp and discard any vegetables.  The Cutting Edge was as good as I remember, but the boys liked Happy Gilmore better.  Ben said next time, he is going to introduce them to his favorite actor of all time, Chris Farley.

Harry went to his first drop-ff birthday party at someone's house as opposed to a laser tag place, a bouncey house place, a bowling alley, Chuck E. Cheese, a park, the ice skating rink, a water park, the pool, etc, and I kind of wish he hadn't.  When he was small and parents came to parties, we went to a few house parties, but since kindergarten, all of his friends have had destination parties, which is what we do, too, because IT IS SO EASY.  Now he's all "I didn't think about having  party at my house, but that's totally what we should do.  Can we have face painters?  How about Bucky Badger?"   I am hoping the allure of a trampoline place that's opening soon will be enough to convince him to opt for a party package SOMEPLACE ELSE.

Ben cleaned out the garage while the boys played yesterday, so I took Dorothy on a few errands and then to the grocery store where I am sad to report she would not ride in a cart.  Folded her little arms and said "No, uh-uh," kind of sadly, like she felt bad for me or was embarrassed that I was even asking.  Grocery shopping took longer and cost about $50 more than usual because someone kept throwing weird stuff into the cart, and some hippie had to help us push a second cart of bagged stuff to the car.  She freaked out once when she had to stop playing a stacking game with cartons of eggs and packages of butter (AAAAUUUGH!), but otherwise, she was happy and excited and good at sticking close to me.  But I was SWEATING when I walked out of there.  I think our days of leisurely Saturday afternoon family grocery shopping are over, at least for awhile because I don't think I can handle her AND Cooper roaming the store freely.

Can you believe that this was sweet Dorothy just a year ago today? 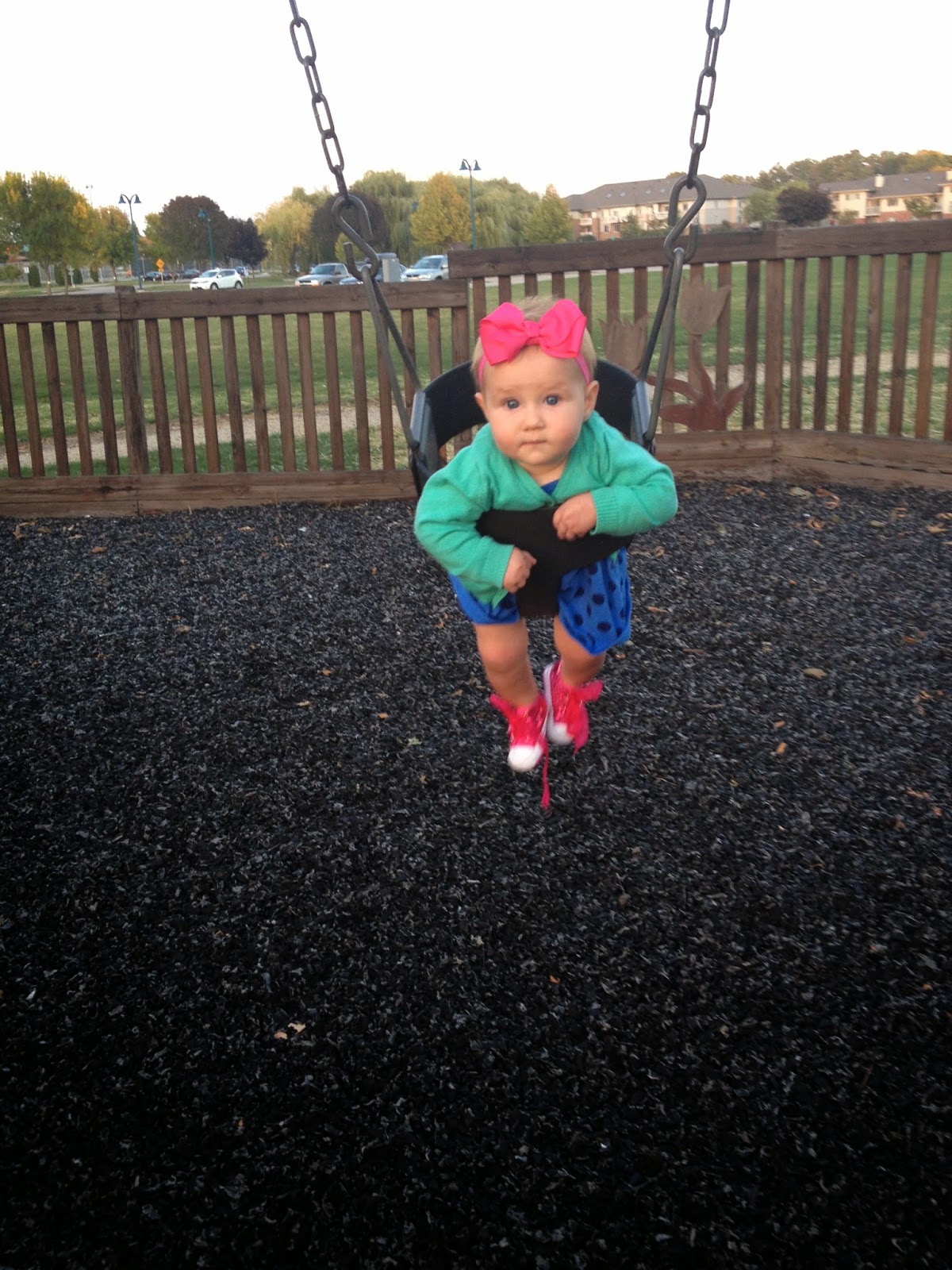 And now she is a rowdy toddler with a ponytail 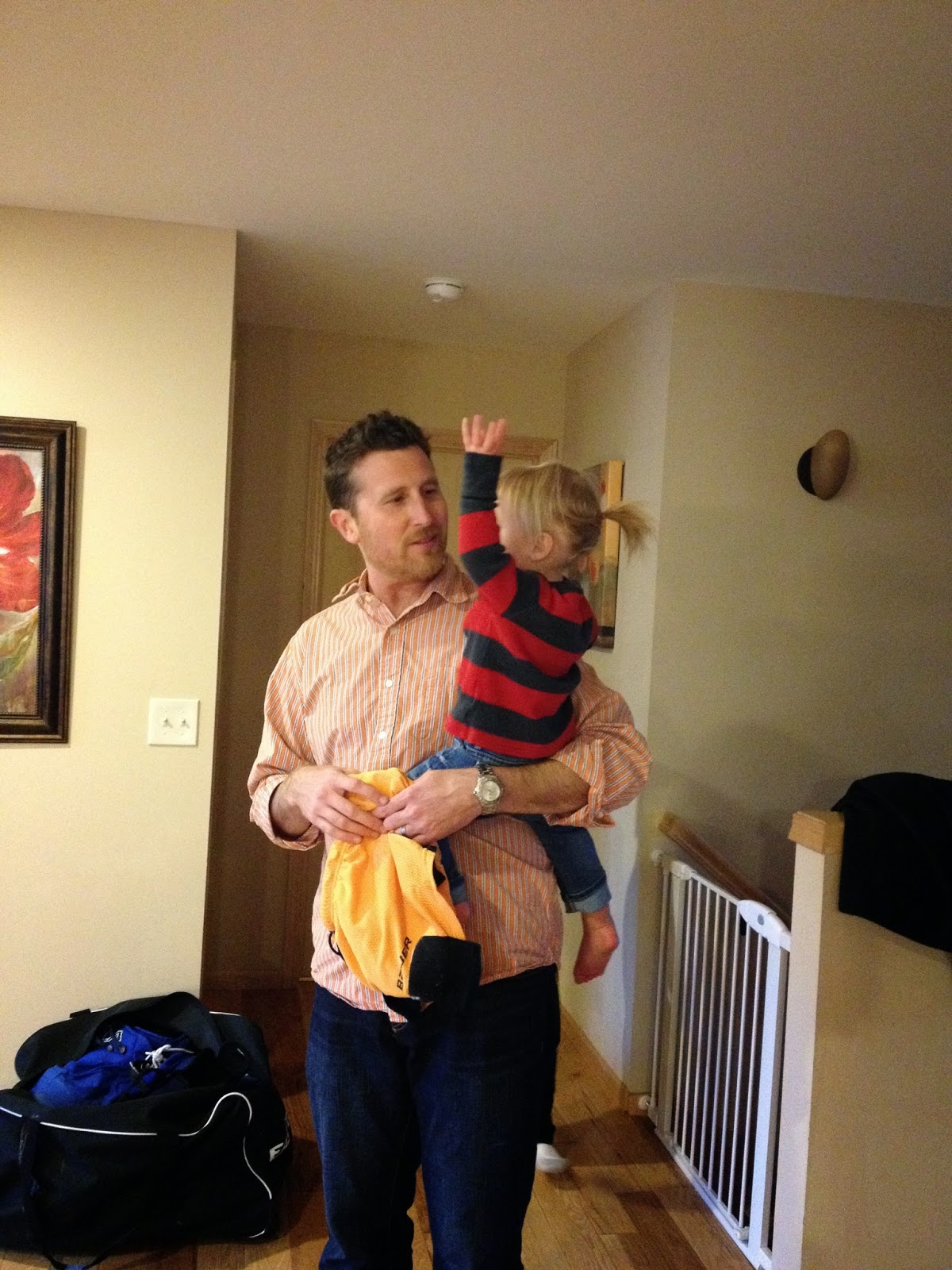 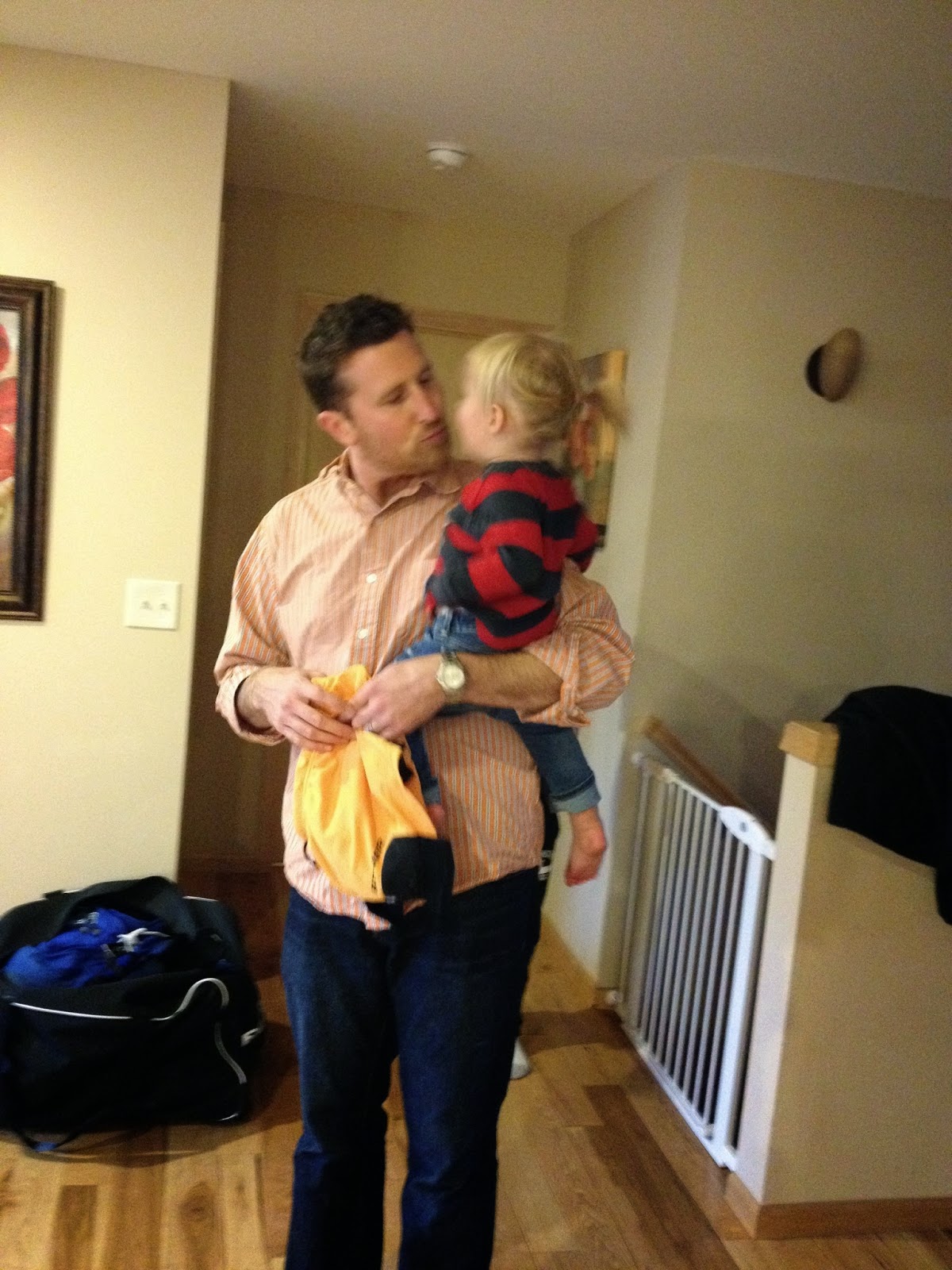 But she also has a hilarious little personality.  Look at that side-eye: 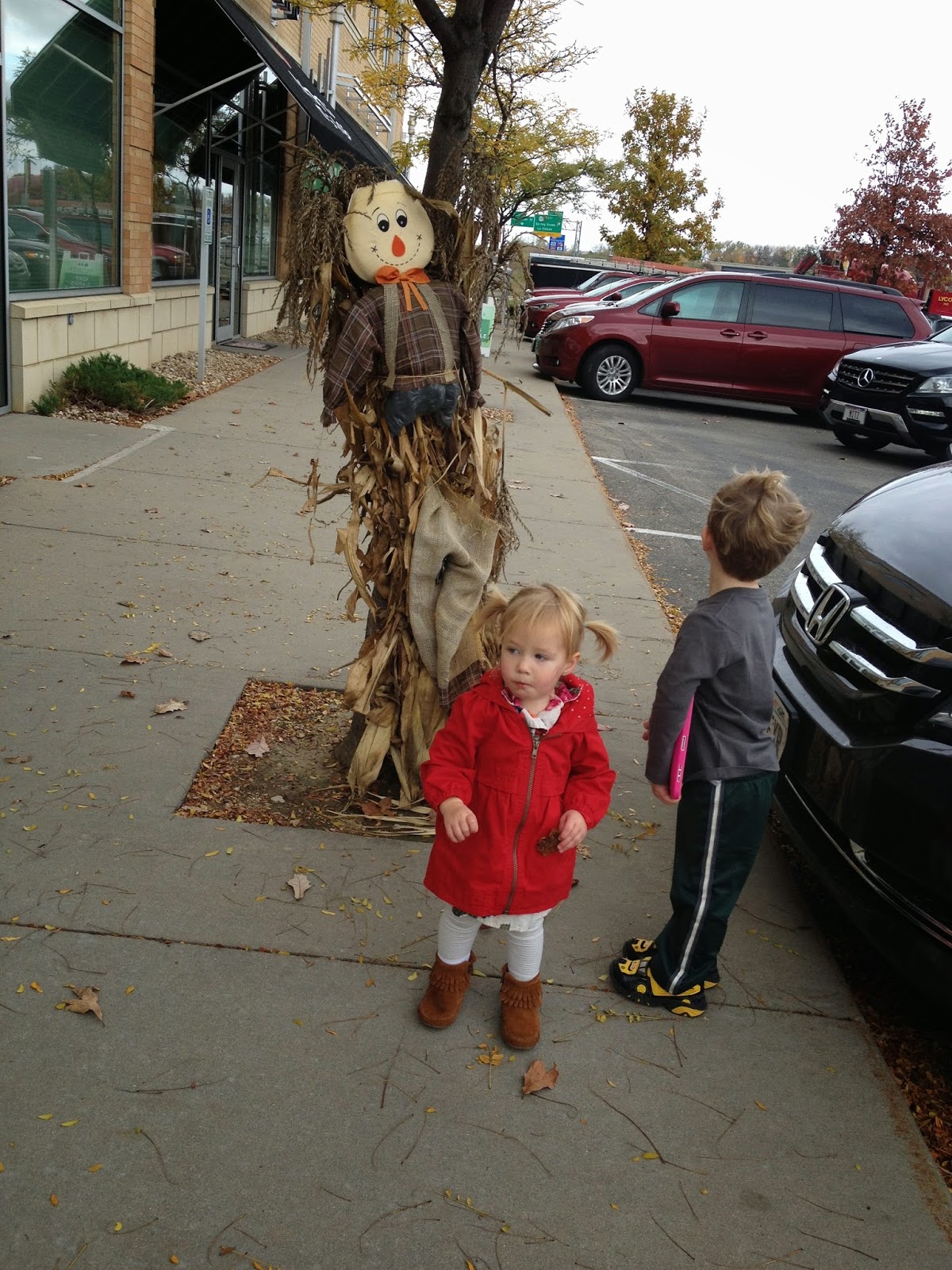 And she has a  mullet (hence the constant pigtails).  Beatrix digs cinnamon rolls, BTW. 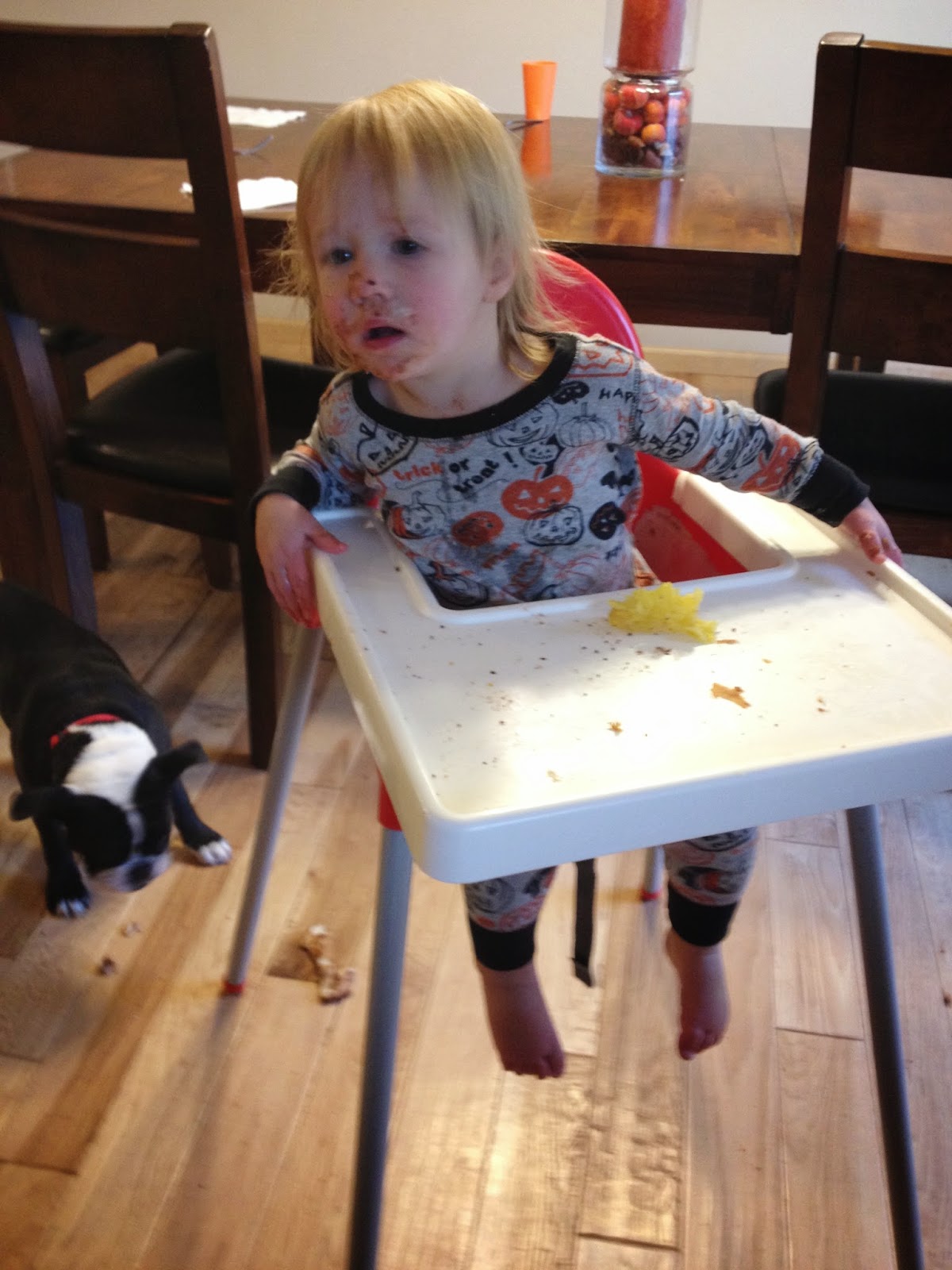 Stacking soaps in the check-out line at the grocery store. 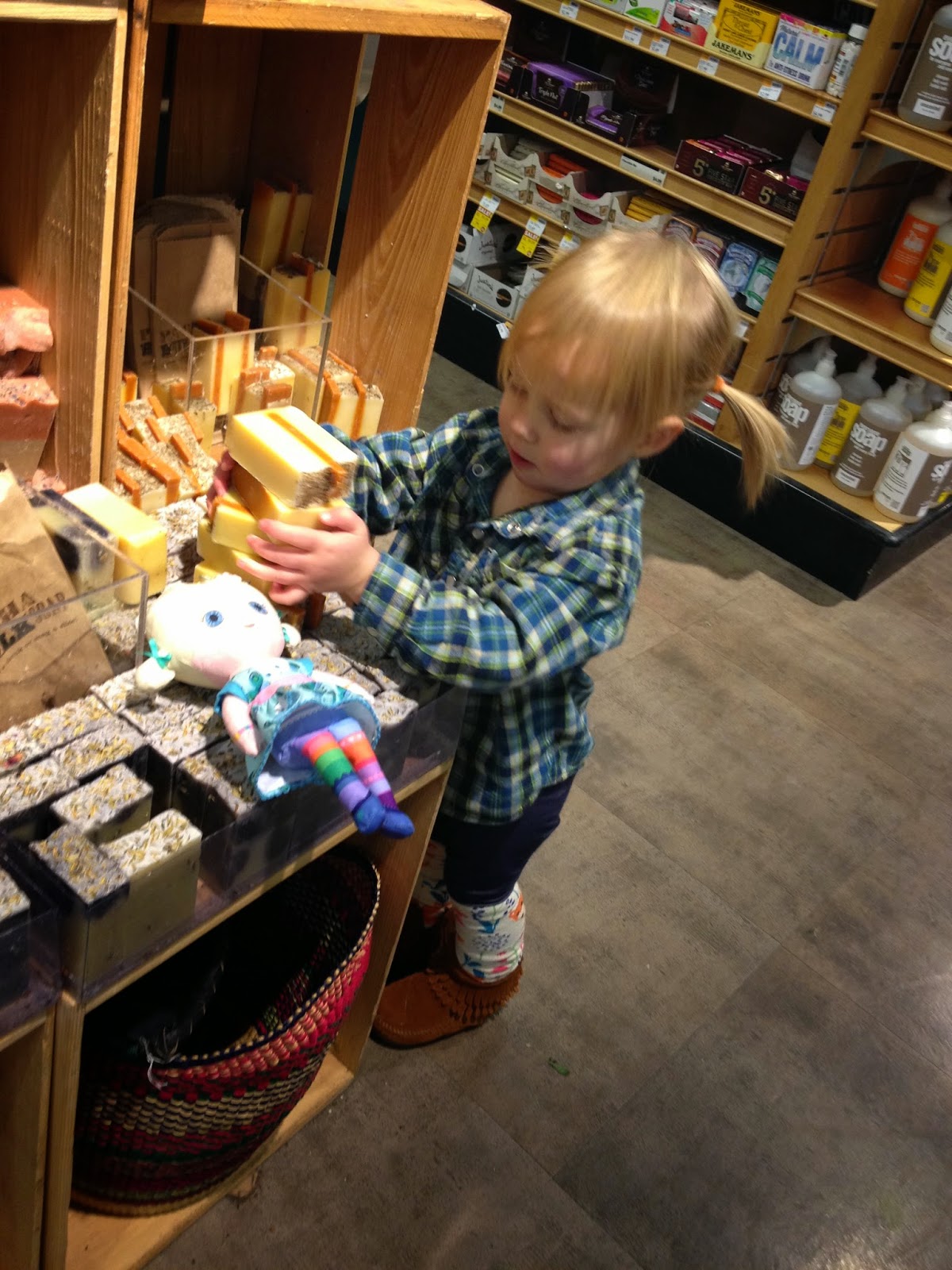 As soon as she saw me this morning, she said "Go go go."  I asked where she wanted to go, and she waved both hands and said "Bye-bye."  I think she had fun shopping yesterday.
Posted by Sarah at 8:21 AM

OMG she is adorable!! I wish you lived closer so you could show me how to do pigtails without hurting them.