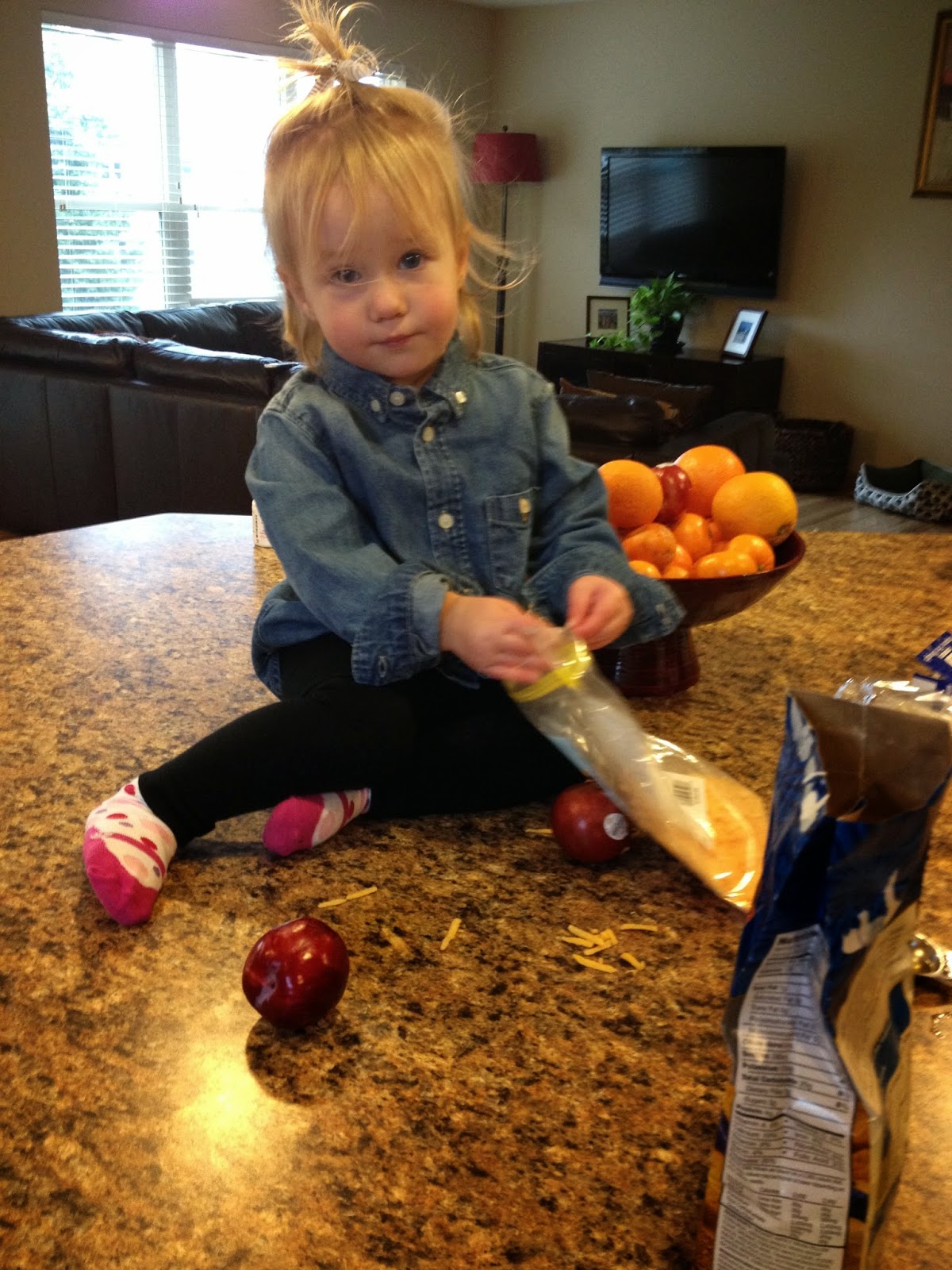 Do you see the attitude I am dealing with here?  Look at the way she looks at me!

Speaking of attitude, yesterday, Cooper threw a 10-minute fit because he saw a 6-pack of Corona Light in the fridge and really wanted one.  "Juice!" he insisted.  He finally calmed himself down enough to stomp back over the fridge and throw it open to peer inside for another beverage choice (spoiler alert: we one have water, milk, beer, and wine, maybe a little vodka in the freezer, but I used most of it making pie crust).  He found a container of half and half I bought to make chicken pot pie, decided it was a milk box, and pounded it-- all of it-- with lunch.  I didn't stop him because I did not want another tantrum.  He is noticeably fatter already. 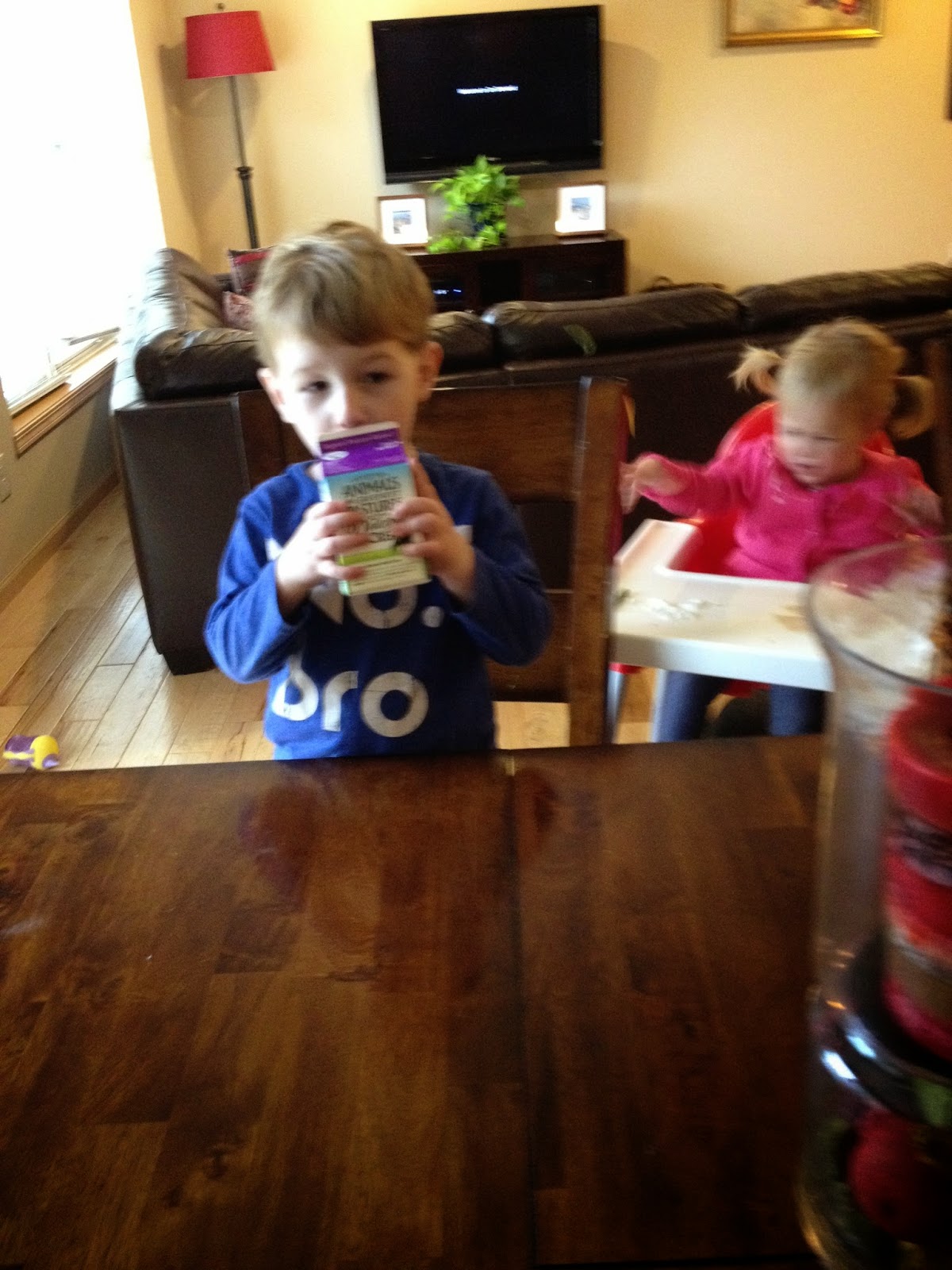 Beatrix, meanwhile, came inside from the chilly, wet back yard and took a very dramatic nap. 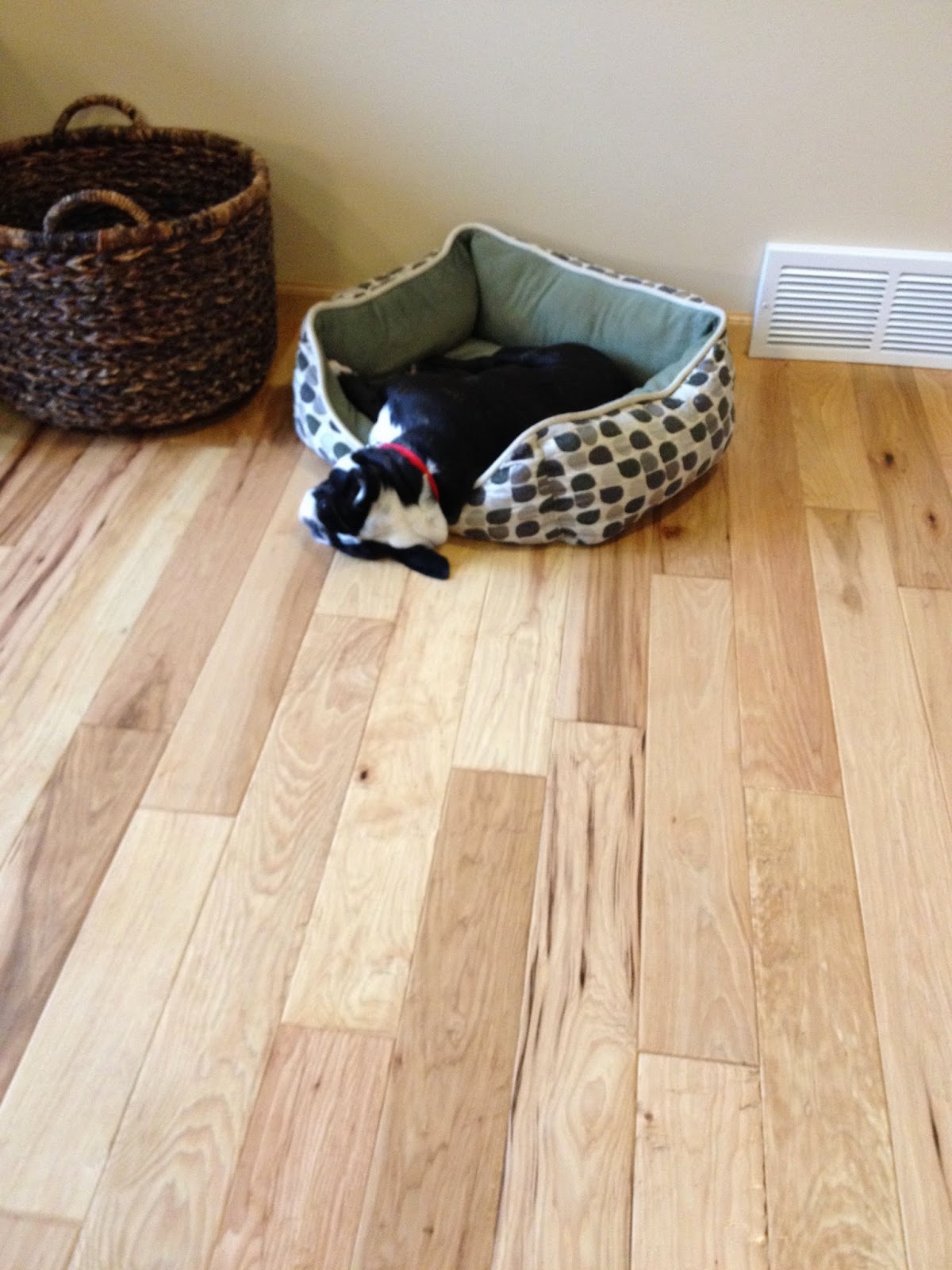 In the midst of this cozy scene, the school nurse called to tell me Harrison was having CHEST PAINS.  WHAT THE EFF?  He has been on a hard-core drug used typically to treat gout and arthritis (neither of which he has, but Cooper probably has gout after yesterday's lunch) that was supposed to prevent inflammation.  I, of course, freaked out, scheduled an immediate echo and cardiology appointment, woke up the babies-- who were PISSED-- went across the street and got both boys because I would never be back in time to pick up Jack, and took all 4 kids to the children's hospital, stopping at the Starbuck's drive through for an after school snack along the way.

Cooper is so funny with the to-scale Starbucks cup. 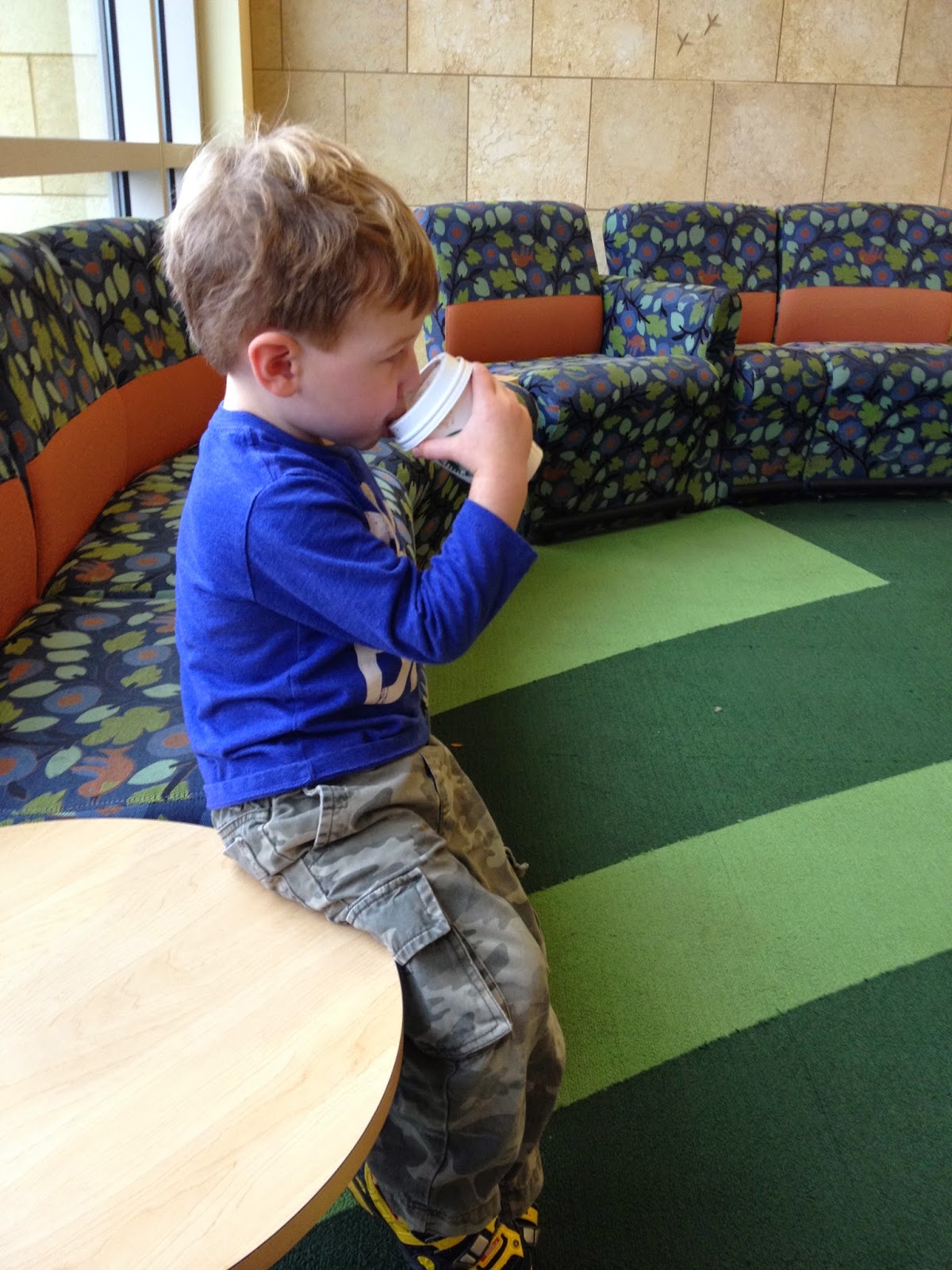 As you can tell by her mouth, Dorothy is saying no in her cute little Wisconsin accent. She says no a lot.  Also uh-uh.  And sometimes, rarely, yesh. 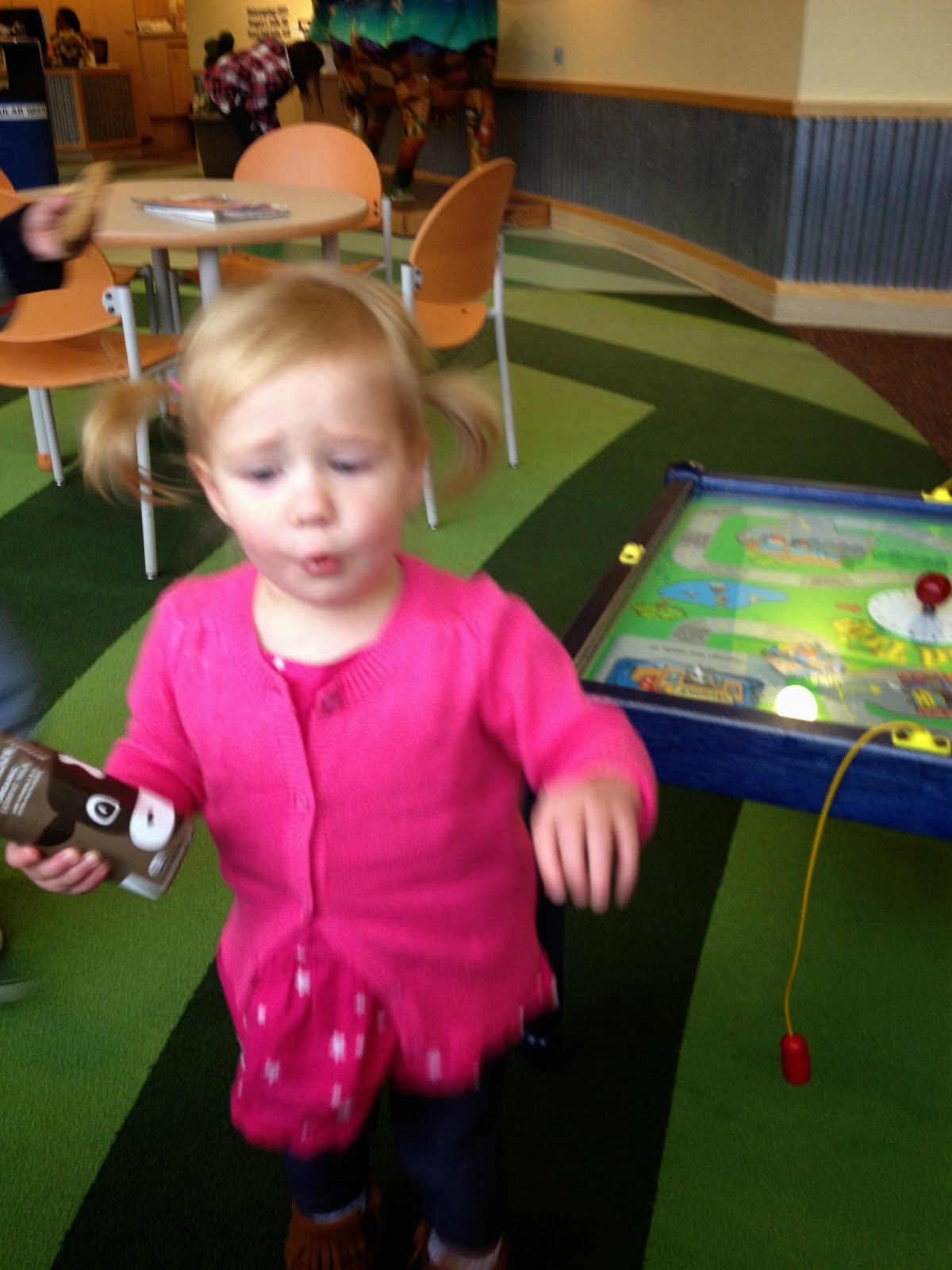 Jack came home from school on Tuesday with a Sophia the First tattoo.  He told Ben and me that he was going to put it on, and then emerged from the bathroom with a cheek tat.  He also announced his intention to not wash his face.  And as you can see, the tattoo was completely in place on Wednesday afternoon.  Also, his sweater is on backwards. 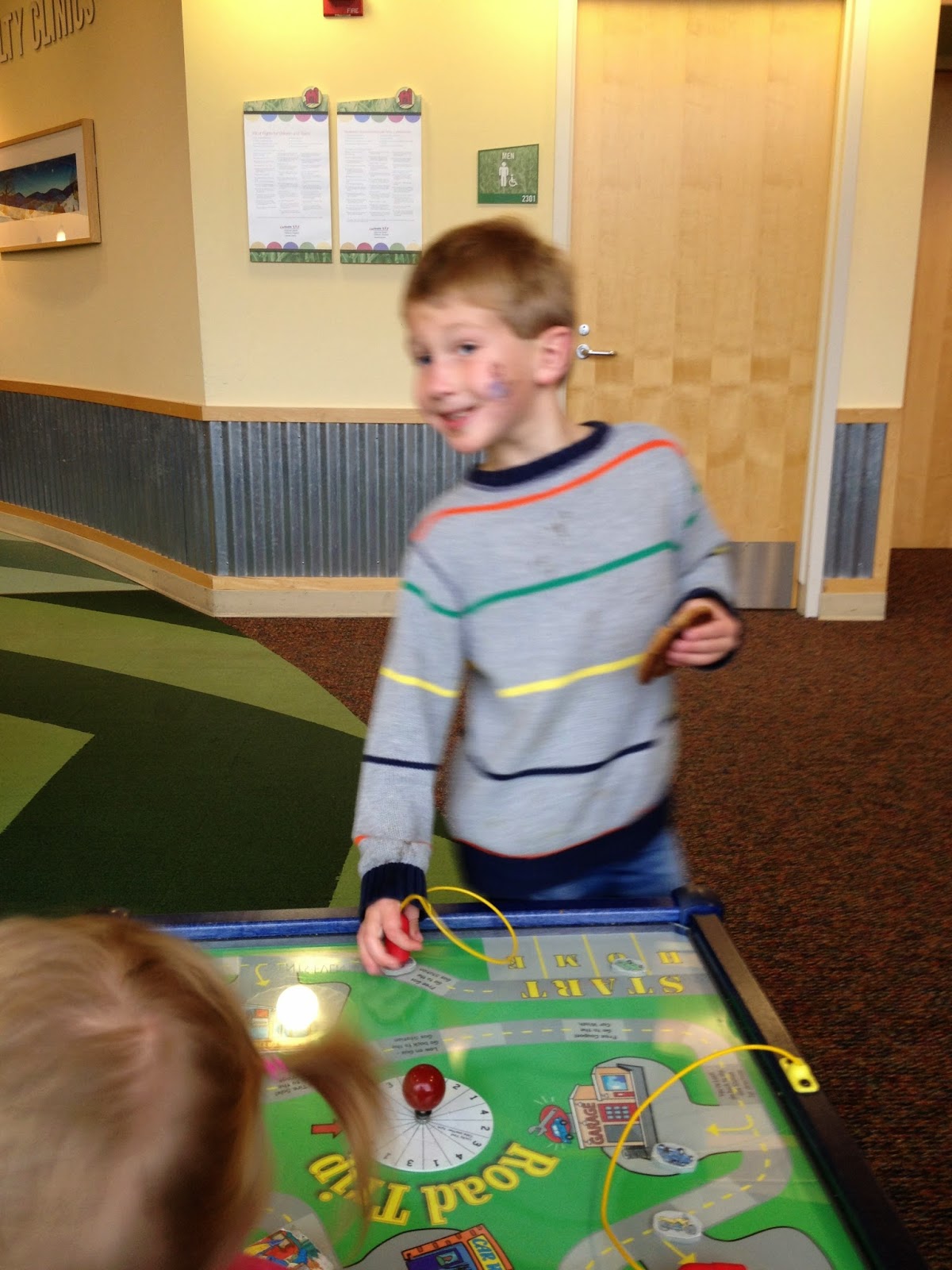 Harrison.  He wears that jersey every time it's clean (we do a lot of laundry-- it's always clean); he only likes jeans with ripped knees, and I swear he is going to get whiplash from constantly tossing the bangs out of his eyes.  I let him go in the echo room by himself because I didn't want to take the whole circus. 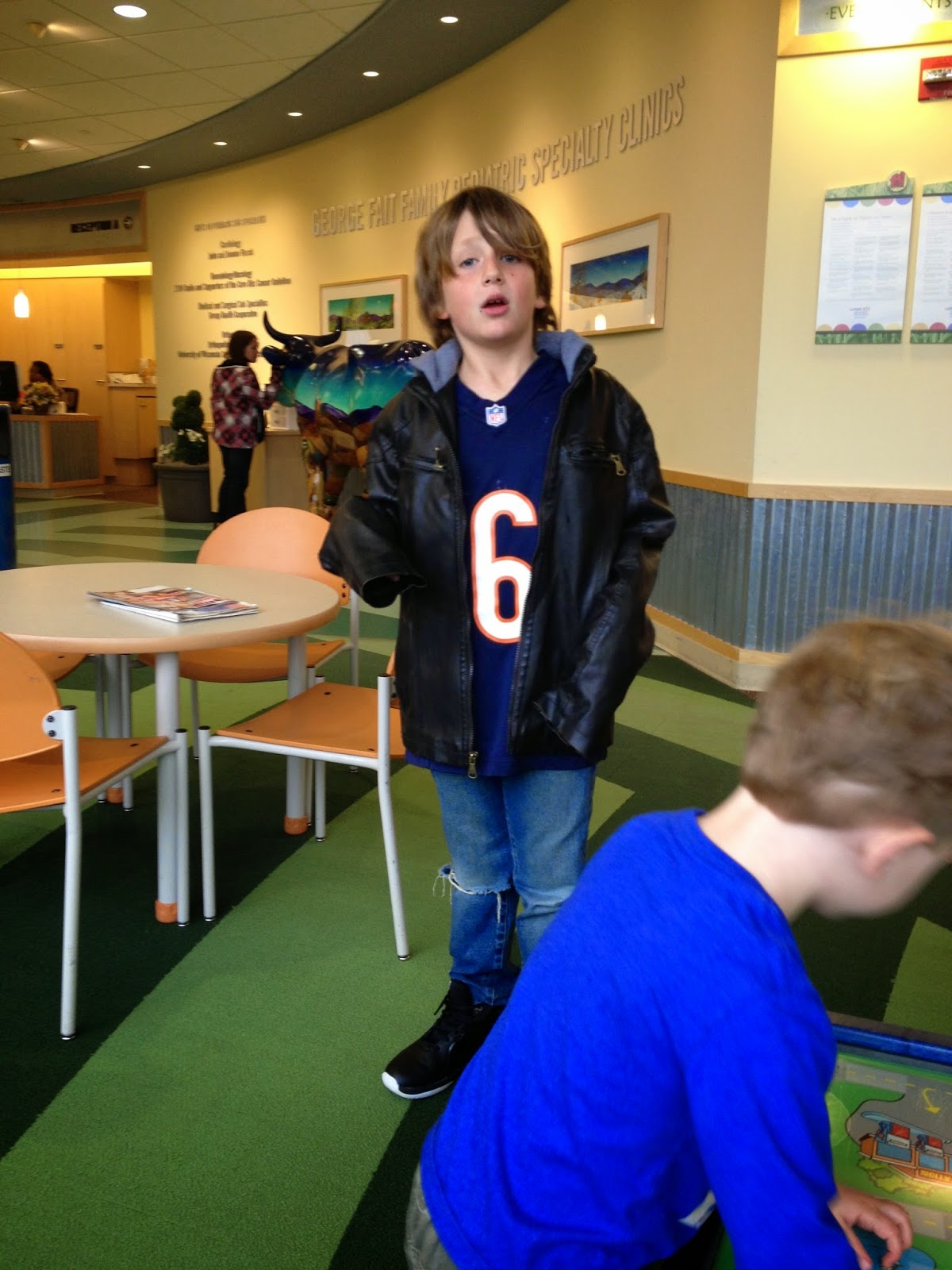 None of the iPads were charged.  NONE.  So I snagged a bag of art supplies from the laundry room on the way out the door. 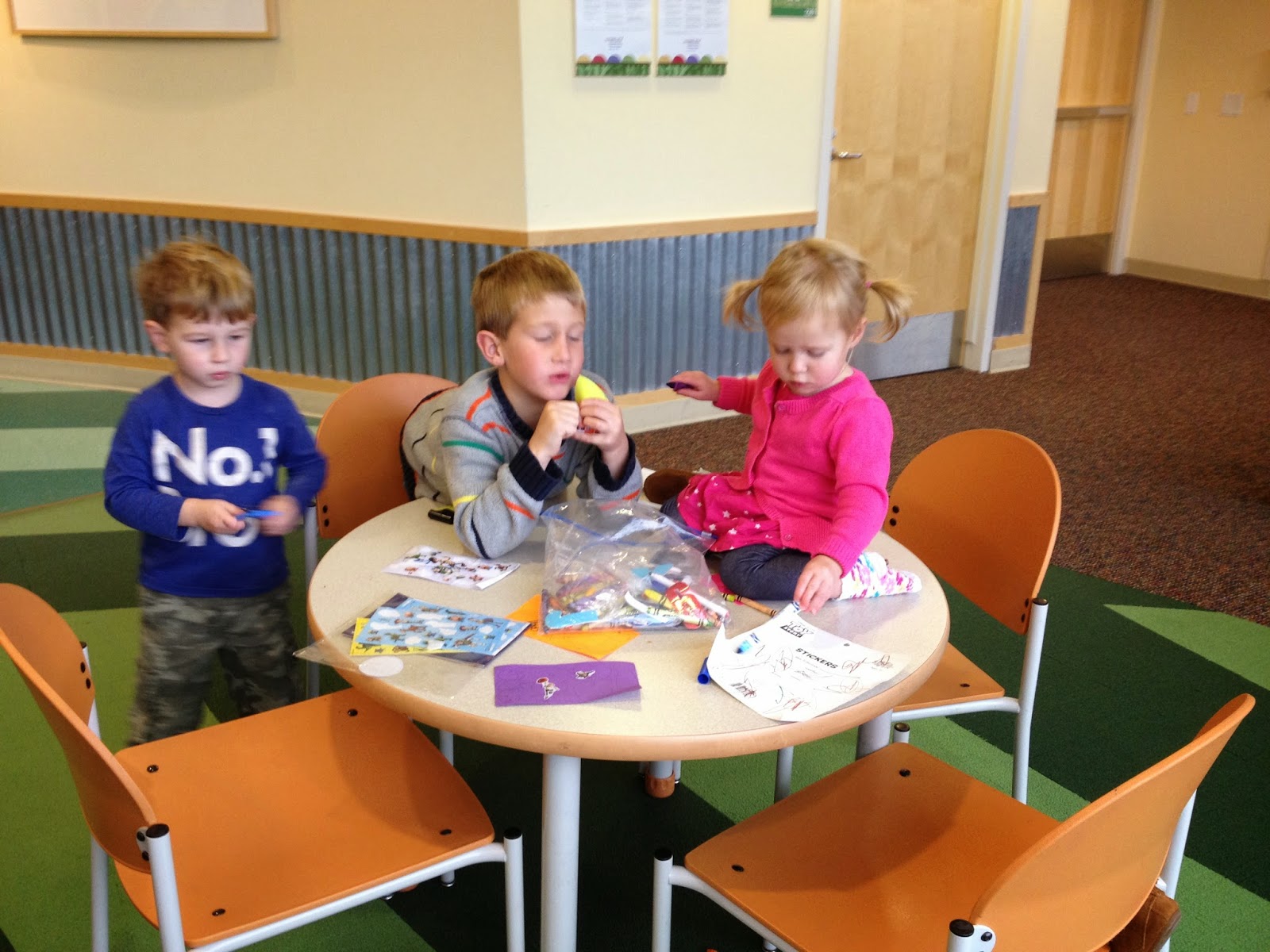 Jack glue-sticked this to his face because he wanted another tattoo. 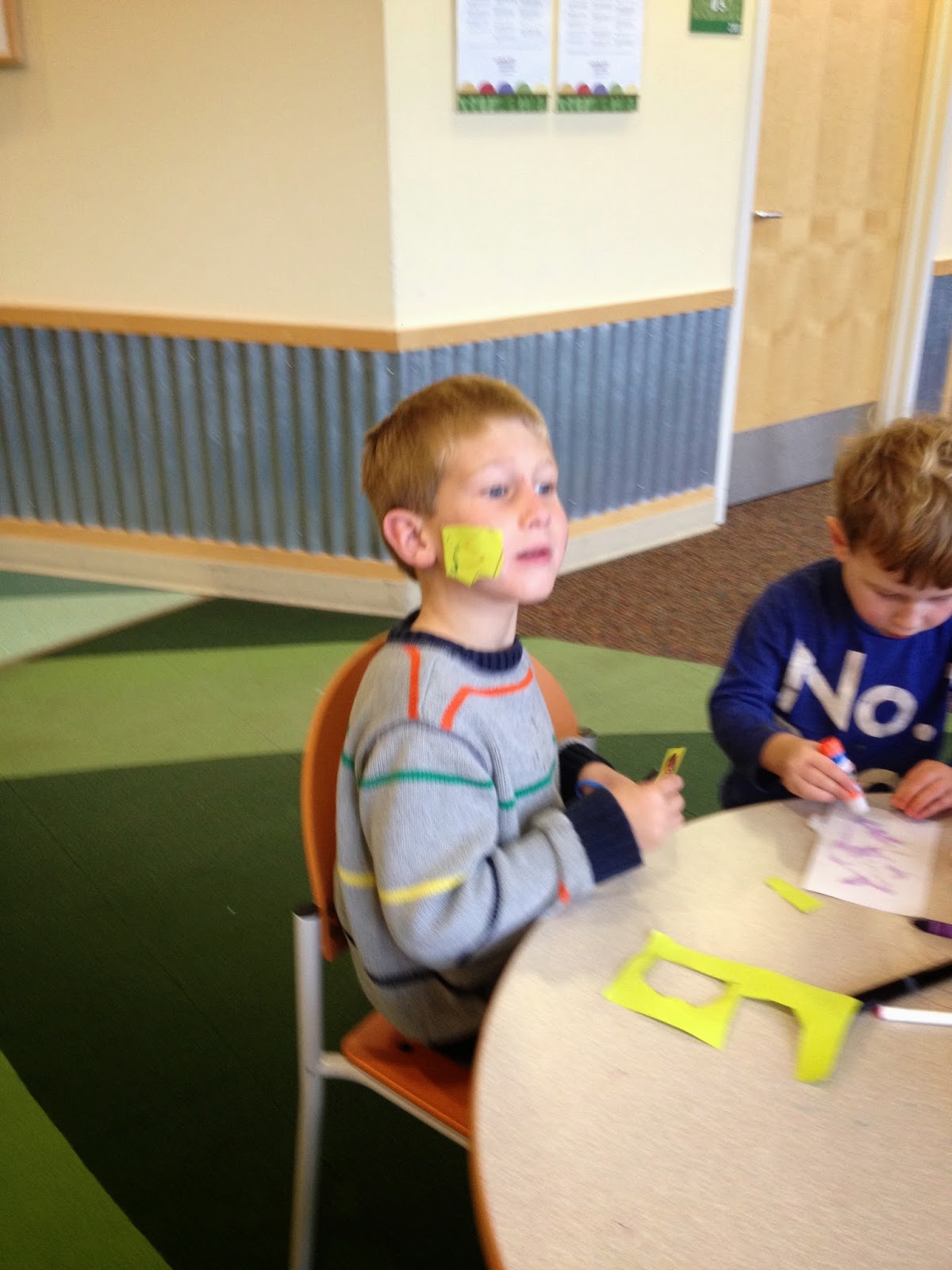 Cooper was very serious.  Dorothy drew all the hell over herself. 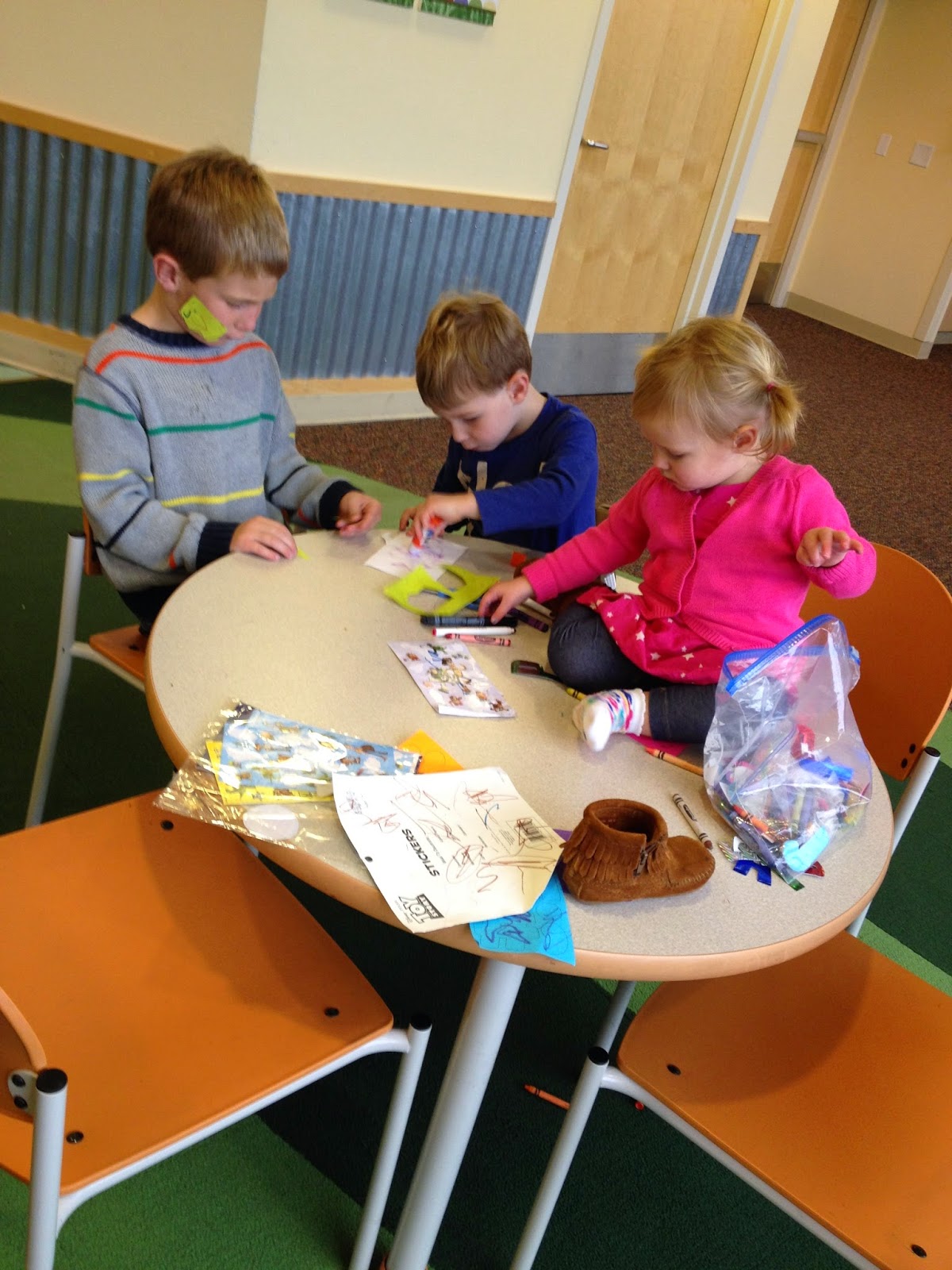 Thankfully, Ben showed up moments after this picture was taken and took the little kids home.

Harry is fine.  Labs and echo fine.  Cardiologist not worried. Next appointment in February.  Chest pain unexplained.  But he's fine.

Here's the gourmet dinner I assembled last night before leaving Ben with all 4 kids and hockey try-outs and a conference call so I could go to wine night:  (I really am a hell of a catch, huh?) 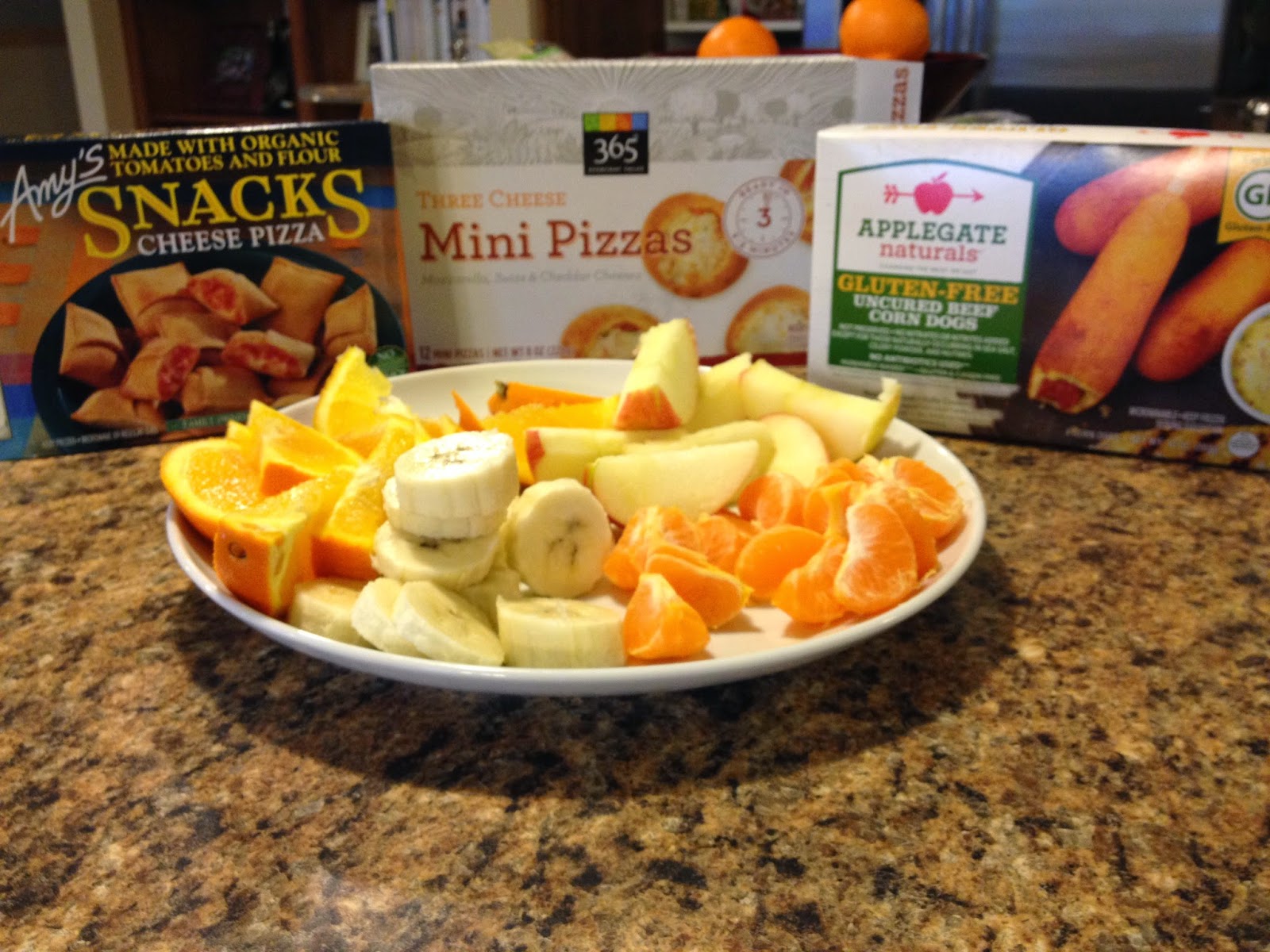 Except for the chest pain, everything in this post cracked me up. Waiting room craft hour FTW!

I'm with Becca! Your life is a sit-com. These pictures are hilarious. I don't know which will be funnier on their graduation video montage - Cooper & the half & half or little miss Sassy giving you quite a look as she sits on the kitchen island.

I'm relieved that Harry's heart is looking good. Perhaps you could tell him that swinging his head causes chest pains and therefore he must cut his bangs?

Julia also enjoys tattooing herself up. She currently is sporting 4 fire station safety tattoos on her arms.

Yay for Harry being ok! I always feel like Evan is a knight in shining armor when he can the children not needing to see the doctor from me when I have to take them all in to appointments. Especially if the appointment is for me.

You have such a nice family :-)
I hope Harry feels better ,I mean it must have scared him too ,he's just a little boy:-(.
It happens always unexpected ,so what kind of coping mechanism can he learn ...
.
All your kids are cute
-
Ash