We have entered the age of Cheerios. They are everywhere. Such a milestone. 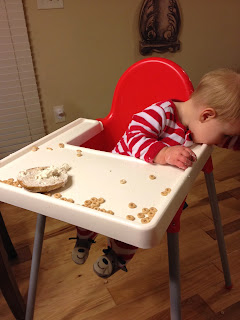 No matter how many kids I have, finger foods will always make me nervous.  Thanks for the advice last week.  She is loving steamed or roasted veggies mashed up, Cheerios, those awful chemical puffs, toasted bagels with cream cheese, and tiny tiny pieces of whatever we're having.  She's loving experiencing these things, rubbing them all over her face, and throwing them on the floor.  but not so much eating them.  Ah, well.

How adorable is Captain America? 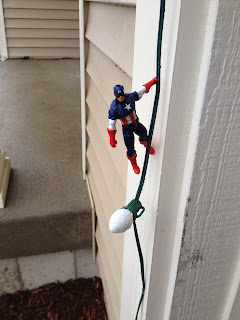 I cam upon this scene while cleaning up the living room just now before nap and died laughing. 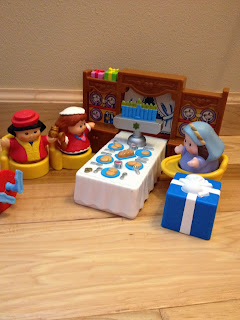 I am toying with making a New Year's resolution to become a quilter.  My previous domestic resolutions have turned out deliciously.  I can make a kickass pie crust, and I have perfected my favorite cookie recipe.  How much harder could it be to quilt?  Probably a lot.  Anybody a quilter?

Speaking of milestones.  Cooper is trying to potty train, and I am so not ready.  We started putting him in pull ups instead of diapers because that's what we did around 2 with Harry and Jack even though they weren't pottiers until 3.  Ever since he ditched the diapers, Cooper has been telling us when he is wet, asking to go potty before he pees, and waking up dry.  Gah.  We tried underpants the other day, but he didn't really seem to get it and also did not mind at all pooping and peeing himself-- he initiated going potty a few times but was generally really happy to play in his own ick. He does look especially adorable in his super hero undies.  Hand-me-down undies, some of which apparently accompanied Jack to preschool if his name in magic marker n the waistband is any indicator.  Poor third boy.
Posted by Sarah at 12:38 PM