Today was a DAY.

So many almost serious head injuries from a baby who stands up on everything.  Her favorite is unflushed toilets with their seats up.  We have a lot of those.

We haven't made it to Dorothy's Little Gym class for 3 weeks in a row because of meetings on my part (the on my part was probably unnecessary.  I mean, did you think SHE had meetings?) and I felt really bad about it because she wants to get down on the floor and play so badly when we go to Cooper's class, but she can't because are you kidding me?  The 2 year-olds would literally kill her.  SO I scheduled her a makeup class today with a slightly older class (10-19 month-olds-- her class is for 4-10 month-olds) that was less than ideal because I had to bring Cooper with me.  Because he is about 6 months older than the oldest kids in that class, he could not participate because he would harm them.  I talked to him about sitting in the lobby at the teeny table that is there precisely for big brothers and sisters to sit at with snacks and his iPad and the awesome woman who teaches his class and would be working in the lobby today.  He was okay with that in theory, but in practice he balked and had to come into the gym with me.  I blame the mom who was giving her kiddo a post-class snack at that table.  LADY.  Your kid had been in the gym for 45 minutes.  She did not need a damn snack.  THIS IS WHY PEOPLE ARE OBESE.  She was super judgy about the iPad, too.  Anywhoo, Coop came in the gym with me but he could not not participate.  So, we left.  In a blaze of flailing.  It suuuuuucked, especially because that was my big plan for the day and I had to come home and clean bedrooms and do laundry.

It's time to sign up for baby classes next semester.  I have to do complicated schedule math to cram in ice skating (Cooper), Kindermusik (both, together), Birds at the Little Gym (Dorothy), and Beasts at the Little Gym (Cooper).  I am a mommy-and-me class expert, and I wish I had something to show for it besides a kick ass rendition of Where Is Thumbkin and a huge sock collection (because those places always make you take off your shoes).

So much standing!  Today, she learned how to bend over and pick something up while hanging on with one hand. 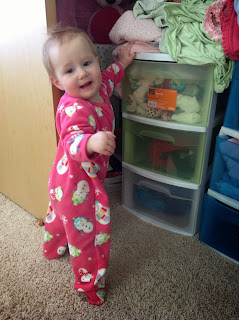 Cooper made himself a place to play with Dorothy's iPod (she uses the white noise app) and eat some pretzels. 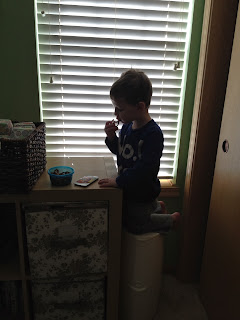 Luckily the lid was down 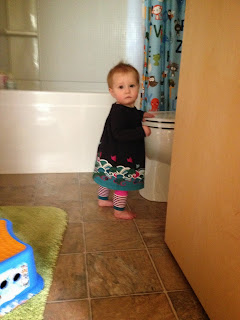 She cruised and was pretty proud. 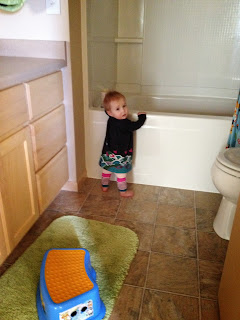 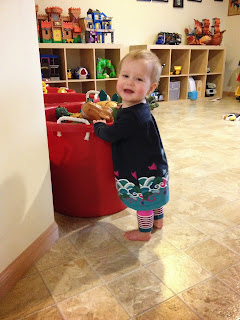 She was watching Cooper-- he amazes her. 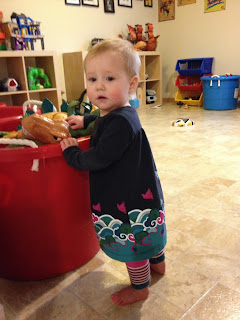 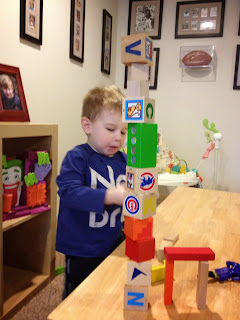 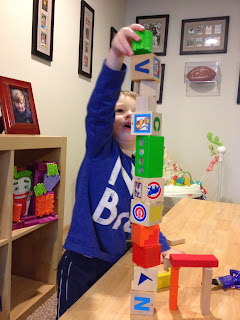 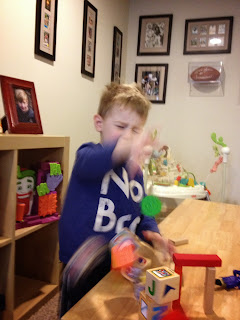 This was the mess of a SINGLE M&M 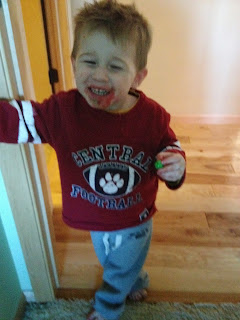 Yep.  I took a picture before I helped. 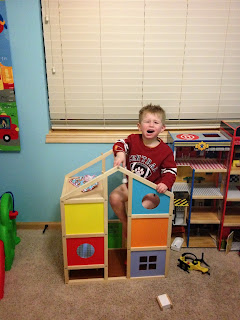 Ha! I love that hes stuck in the house with no pants on!

It truly as if you are describing a Wisconsin boy version of Vivian. She would greatly benefit from a gym class called Beasts.