I'm on break until the middle of next month!

I have once again reached a time in my life when Jello shots are served at parties and leggings are as good as pants.  It's like college except that these Jello shots were arranged in the shape of a Christmas tree because we didn't have Pinterest in college, but oh if we did, sorority stuff would have been EVEN CUTER.  You know what else would have made sorority stuff even cuter?  Wearing actual pants.

I had a great time at a neighborhood cookie exchange last night, and Ben had fun out to dinner with a friend.  The babysitter might not have had fun because Dorothy woke up 45 minutes before I stumbled home (literally stumbled-- I walked there and back despite the freezing temps because SO MUCH WINE) and didn't want to go back to sleep.  But all 3 boys slept like rocks and the babysitter emptied the dishwasher because she is awesome.

The night before last I did all of the baking.  Jack changed his snack order from teddy bear sugar cookies to from scratch chocolate chip brownies with crushed candy cane on top, ad I made cookies for lst night and snowmen cupcakes for Jack's class party today.

Fuck those fucking snowmen is what I have to say about that.  If I gave a shit about presentation I would throw them out and start again, but luckily, I have no pride, so some really wobbly, smeary snowmen will go to kindergarten today.  Thanks Ben for cutting and tying their creepy little fake fruit scarves.

I love when pictures from Coop's eye view hit my photostream 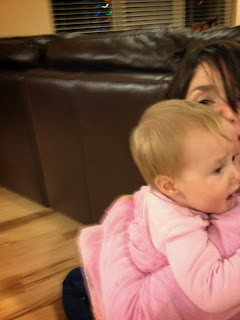 They were cute in pieces 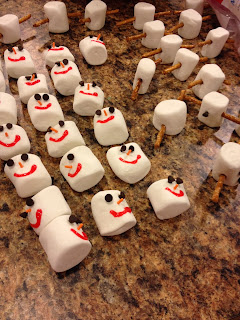 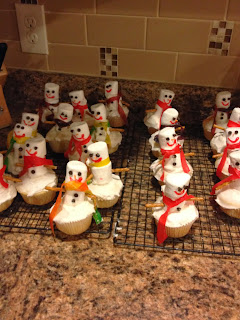 Big plans today.  Dorothy has a 9-month check up, and Ben Cooper, Dorothy and I are all going because we don't have anything else to do.  Then I have a check up which sucks because my weight.  It is not good.  Have put back on 2 pounds and am still 19 from my goal.  BLECH.
Posted by Sarah at 9:04 AM

Last night sounds so fun! And I think the snowmen look great. Pinterest is full of lying bitches.