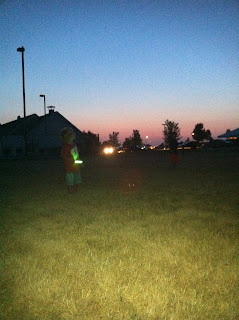 Tonight, we BROKE FREE of the confines of our nightly routine, which we knew would certainly backfire since our kids have gone to bed at the same time their entire lives.  We stayed late at the pool, which was open until 9:00. 2 whole hours after we tuck 3 children into bed.  Cooper was so confused when he nursed at 7 this evening and wasn't all zipped into his sleep sack.  All of them played happily at the pool, though, and despite a small incident in the shower when I was trying to rinse the California Baby off a slippery, naked Cooper, and he did that thing where he arches his back and tries to get away and I almost dropped him on his face but saved him by squeezing extra hard with the hand that held the shower head and scratched the shit out of his chest and stomach and I hope he doesn't get flesh eating bacteria from the gross pool shower nozzle, we had a lovely time swimming until the lights came on underwater.

Then we adjourned to the tennis courts and set up camp on the prickly grass (seriously-- it was like sitting on needles-- we need rain) outside them to watch fireworks.  Fireworks that didn't start until 9:30.  Gulp.  Ben grabbed some emergency glow sticks that he keeps in the tornado box in the basement (what the hell are glow sticks going to do for us in a tornado?), and Harry and Jack ran around like idiots lording them over their pool friends, some of whom brought light sabers, which is pretty much the best idea ever. 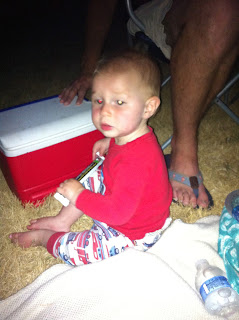 Cooper tried to get in our beer cooler (so classy, aren't we?) and got really sad when he couldn't.  He was out of his mind tired. 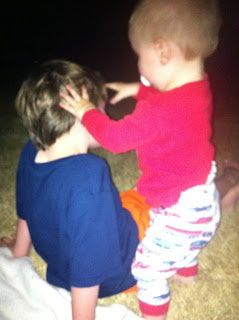 His favorite thing to do was stand up holding onto only Harry's hair.  Harry is an awesome big brother. 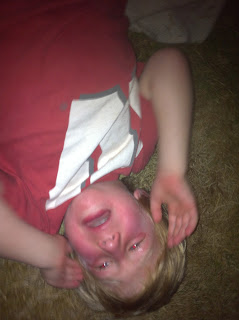 Jack freaked the hell out when we took away his glow stick because Cooper was trying to eat it and becoming enraged when we wouldn't let him.  jack cried through the rest of the fireworks display, out of boredom and exhaustion, although he did tell Ben when we got home and Ben was putting him to bed that the finale was his beautiful because it had all of his favorite colors. 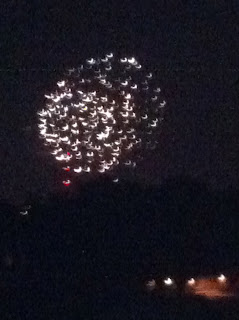 Crappy iPhone picture because I forgot my camera.Because THAT'S how spontaneous our trip was. 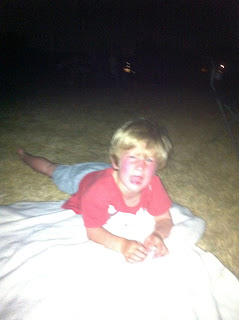 Still crying.  Wanted to be running around on the grass with the other kids again like before the show started, but he couldn't because all the other kids were watching the damn fireworks. 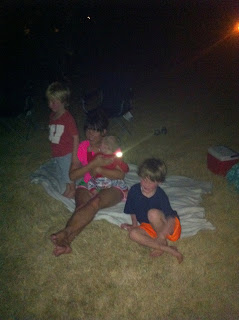 Ben mocked the shit out of my outfit because of my neon shirt and also because the other moms changed into cute sundresses, and all I packed in my pool bag was workout clothes. 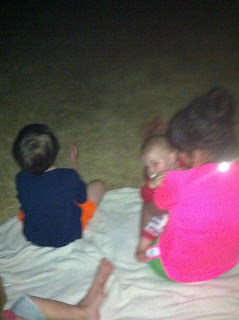 looks like a great time was had by all, maybe next time bring ear plugs as a defense from the little loves...Bomma

Good times! We just put the kids to bed at 10:30 after our all night fireworks. Tomorrow may be a problem.

It's ironic that the only time the light sabers serve a useful purpose, they aren't there! looked like a great time. I like the earplug idea of Bomma's. Especially when you take them OUT when the explosions start!

I can personally attest that glow sticks are NOT poison. I know that not from one child biting one, but TWO. I am am idiot.