It took us a long time to get pregnant with Cooper.  Almost a year, which for us was a really long time.  I went to see my doctor, who is really sweet in general about my anxiety issues and ran a bunch of tests even though she told me I was probably just fine.  When I went to the doctor's office to take a pregnancy test (because that's how our awesome HMO works-- you have to have a positive test in the clinic before the whole prenatal care system begins), I was stunned to find it was negative because I had a row of peed-on sticks of varying sensitivity and spendiness lined up on my bathroom counter at home.  I expressed my dismay/distress to the chatty nurse who called with the result, and she had me come in right away for a blood test (the exact same thing happened with Jack, too-- apparently the clinic uses super shitty pregnancy tests).  I got the results almost immediately on my phone (another awesome feature of our HMO-- an iPhone app called MyChart.  Sometimes I get the kids' strep test results while we are still waiting in the pediatrician's office).  About 15 minutes later, MyChart pushed a notification of a message from my doctor, and I opened it to find a smiley face icon next to the positive result-- told you she was sweet.

Even though we waited  awhile to conceive him, I remember a pregnancy filled with trepidation.  About having 3 kids to look after, take care of, keep from killing each other.  About pregnancy complications.  About labor and delivery.  That one kept me up many, many nights, and I think it's the reason Cooper was so late-- I was seriously freaked out about giving birth, unable to relax and let the process happen.

Cooper, though, is so wonderful that all of those fears have fallen away.  Harry and Jack (but especially Harry) dote on him and make him laugh wildly.  He loves the water and fits into my perfect pool summer without a ripple.  He has such a winning, two-toothed smile, and except for his terrible night time sleeping (but he slept like a dream-- 10 hours at like 2 weeks-- when he was tiny), everything he does is easy and perfect. 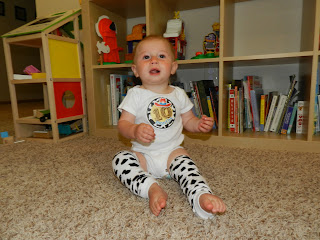 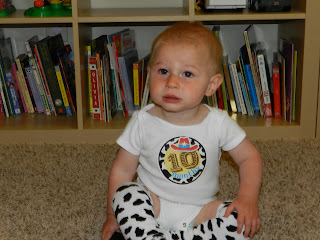 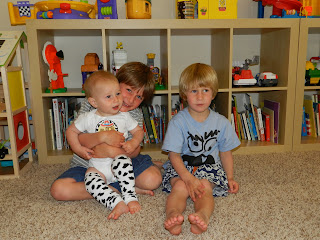 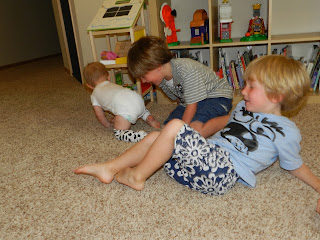 These past 10 months are a blur, and my little Cooper is almost a zombie toddler.  My Mr. Baby, our third stooge.

I can't believe it's ten months already! Cooper is adorable, and the three of them together seem like such entertaining chaos. Cute stooges. Awesome post.