A big day for Coooper

Not only did he eat his first grilled cheese sandwich (cut up into tiny little pieces, of course), but he also had his first ride on the zoo merry-go-round.  W.O.W.

He totally loved the sandwich, but the whole zoo experience was seriously underwhelming for him.  Minutes after we took this picture, he freaked out, unable to withstand the indignity of both a stroller and a hat, and I (not Ben-- just me, or he would flail like he was being tortured) had to carry him through the zoo and push my purse in the stroller.  Also, Harry and Jack's hands turned blue from their popsicles, and their arms got stained to the elbow. 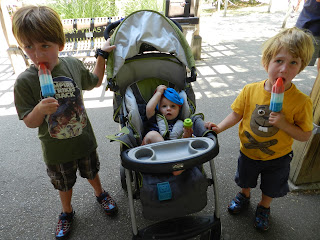 He did not drink this apple juice, but he insisted upon carrying it with him, much to thirsty jack's consternation. 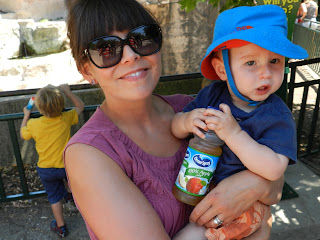 Harry had on a lot of sunscreen.  He was also happy to sit on the giraffe because he does not like merry-go-round animals that go up and down. 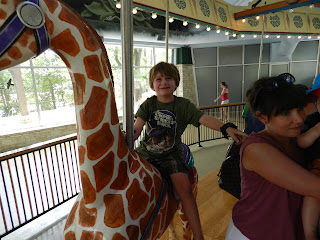 I don't think Jack has ever ridden on the carousel by himself.  Last year, he was the special snowflake baby, and he held him on his horse (or, in this case, polar bear).  Clearly he was cool with his new freedom. 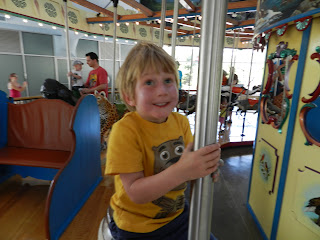 Ben set the camera up on a bench behind us.  As soon as I saw this picture, I bought weights at target and will be working on my triceps hardcore. 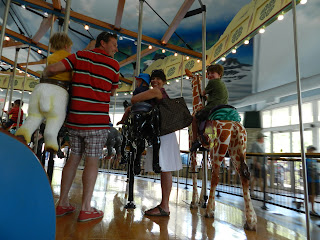 Very serious about the ride. 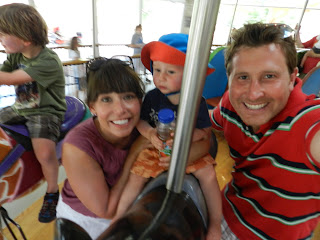 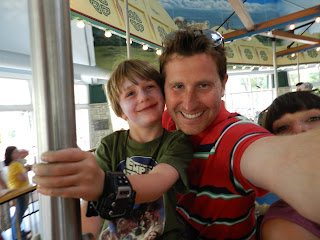 Merry-go-rounds bring out such funny emotions in kids! Syd LOVED them until she wanted to do one for her birthday and got overwhelmed by the build-up. Eli's like Harry and prefers the not-moving animals. And I've given up on the stroller at the zoo. More work than it's worth, and no one ever wants to sit in it.

I was so annoyed with Charlie once when we went on a merry go round and he wanted to sit on the bench! The bench! Love the pics and your arms look fab. Cooper's the best freeweight there is.

So great! love the photo bomb!

So great! love the photo bomb!