We haven't done anything to our room since we moved into the house and bought a couple lamps and a comforter we now both kinda hate at Target.  We've added a Boppy pillow on the bed, some clutter, a couple stains on the carpet.  As you can see from the picture below, Cooper likes it rough.  Also, the room is bare, as in NOTHING ON THE WALLS: 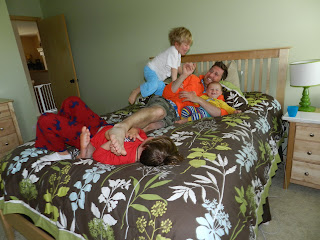 All of this sounds like I am getting ready to tell you we have improved the room, but actually, we have made it worse. We added some bright blue Safety First bed rails because a certain almost-10-month-old has turned into the world's worst sleeper and ends up in out bed most of the night. Since he only has 1/10 of his teeth, I am hoping he's getting a few more, and that's why he's so terribly restless right now. 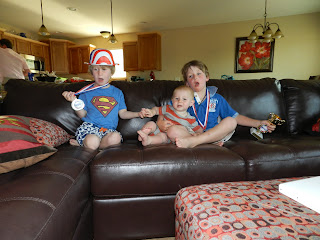 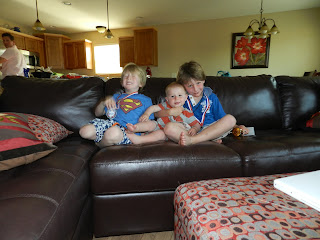 We continued our summer theme of being sickeningly happy by having a lovely 4th of July with some old college friends and their adorable toddler who came to town to cook out and go to the pool.

Harry has discovered a new happy place: His Lego table in his room, where he spends hours making stuff. 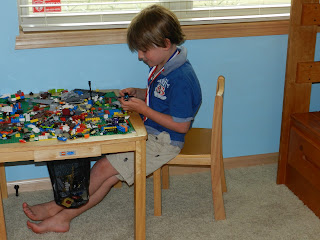 This morning, he showed up in the kitchen in this super freaky outfit. He and Jack were playing robber because if you ask Jack, he'll tell you that he wants to be a robber when he grows up. Um. 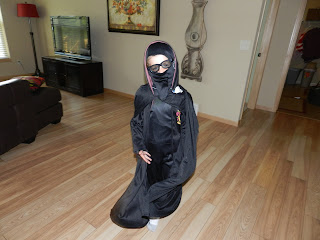 Our house celebrated its one-year birthday with a team of contractors descending to do drywall repairs (anyplace a nail pop appeared or a large crack showed up), fix a door and a window, replace the water-damaged kitchen counter and cabinets, and install the new, deeper sink and faucet we bought.

I love the new faucet, which is funny because before this week, I don't think I have ever paid any attention to faucets at all. 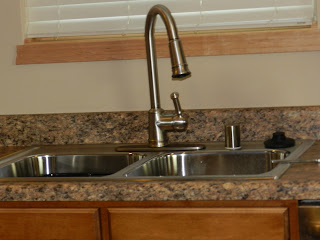 We are getting a back splash on Monday, and I am super excited! (and seriously, another thing I have never cared about before).

Cooper, as I have mentioned, will not drink a bottle, so he and I are together a lot. Lately, though, he is able to self-feed more and more. Tonight he ate watermelon and cottage cheese all by himself, and tomorrow morning he is going to try a waffle, assuming Ben makes good on his promise to get up and make them. (A promise, by the way, made as we prepped for the workers to arrive and emptied our kitchen cabinets and happened upon our waffle iron. Also, remind me to never buy another cookie cutter because I have thousands.)

One thing he does that I love, though, is hold and eat his own puree pouch, which must be the equivalent of a formula baby holding his/her own bottle: 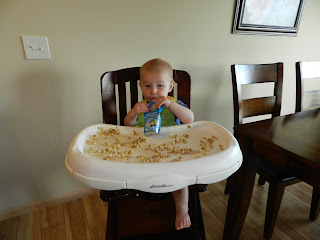 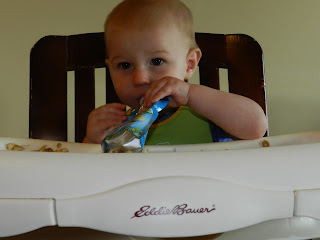 We have waffles and bacon and berries on the horizon tomorrow ad not much (anything) else.  Lovely.
Posted by Sarah at 11:27 PM

Cutiepie!! Yay for a deep sink and new backsplash.