I think my camera is broken-- it is super slow and every picture is blurry.  Damn it.  So now if I want to take nice pictures I have to use my phone. 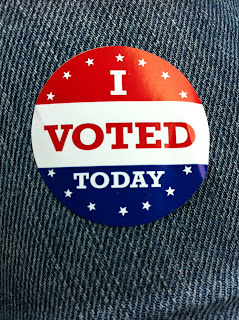 Yesterday was a huge disappointment, huh? 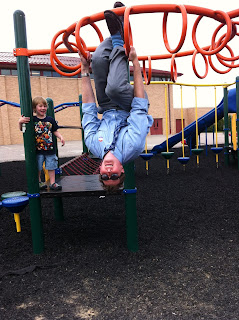 Not for that guy.  Not only did he resurrect old playground skills, but he got a brand new white iPhone 4S because he jumped in the pool with his old one on Sunday.  We've had a string of water meets Apple product incidents lately.  Jack dunked his iPod Touch in his water-filled cupholder in the car.  I put my Nano through the washer and dryer.  And then Ben and the phone and the pool.  But Jack and I were mature enough to STOP TOUCHING our freaking devices and let them dry out.  Ben?   Not so much. 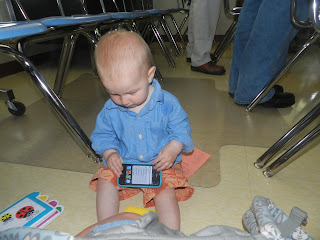 I was so desperate to keep Cooper happy at Harry's play yesterday that radiation be damned I actually let him touch my phone.  Pretty sure he emailed a bunch of people, but I forgot a pacifier, and he couldn't stop screeching, so what are you going to do?

Harry was a parrot. 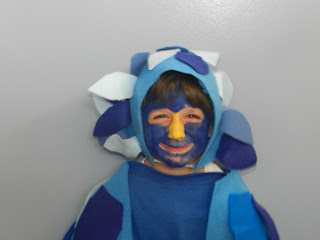 Who danced like no one was watching and seemed to give Jack the heebie jeebies. 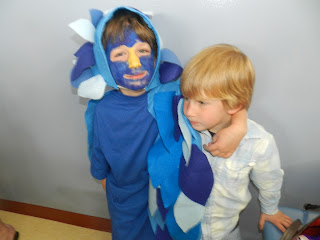 I left Jack in the front row, sitting on the floor with a little sister of one of Harry's friends and the older brother of another one of Harry's friends, and Cooper and I went to stand in the back because I was wearing Cooper in the Ergo at that moment.  But then, of course, Cooper started crying because the room was so hot, so I had to take him out of the Ergo and let him crawl on the filthy floor.

About that time, a large couple arrived and STOOD DIRECTLY IN FRONT OF ME.  I thought it went without saying that only the people in the BACK OF THE ROOM should be standing.  I said to the very tall man and his wife with giant hair, "Oh, are you going to stand?"  "Yes," he said.  "Unless I am in your way."  I started at him from my place 5 feet and 2 inches off the ground, and he turned back around.  Then a bunch of other rude assholes stood up, too, so I had to balance on a CHAIR in the very back row with Cooper under my arm.  And my view still sucked. 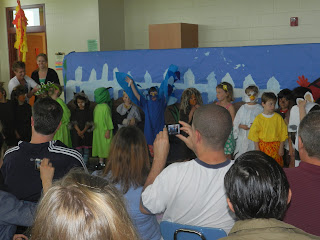 But still.  Talk about adorable. 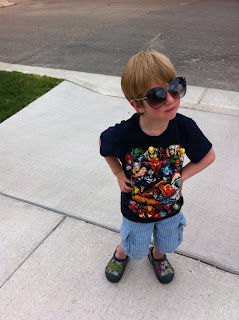 Here's jack being adorable, too.  You know, just to balance things out.
Posted by Sarah at 10:20 AM

Sorry the recall went the wrong way yesterday--still kind of shocked by that.

Harry makes one hell of a cute parrot, though! And hurray for iPhone 4S--have fun w/ Siri. Ask her to tell you jokes.

Love that last picture of Jack--nothing cuter than a little boy his mom's giant sunglasses.

Love Harry's costume! sounds like the state senate changed hands yesterday, so Walker won't get anything done, but I'm heartbroken!