I feel like this is going to be a multi-volumed essay by the time it's done because while Harry's flu has passed (thank goodness), Jack fell tonight, and Ben and I are just sitting here, horrified and waiting for the other shoe to drop. And then what the hell are we going to do? Who's going to take care of these damn kids? And am I ever going to get to go to work again?

I stayed home Monday because I was feeling terrible myself (so maybe I already had it? although I don't think so because what Harry and Jack had is like 400 times worse than what I had last weekend, and the pediatrician said if Ben and I get the piggy flu, it will be waaaaaaaaay worse for us than it was for the kids). Harry was sick that day, too (he actually spiked a fever Sunday night before just before bedtime), and we just sort of sat around in our jammies all day. (yeah, I know the date on the post is Tuesday, but these are Monday pics). On Tuesday, I was fever free, so Ben and I split the day with the kids, so I could teach my class.

This is Tuesday morning. I came home from the gym to find everybody in fairly good spirits 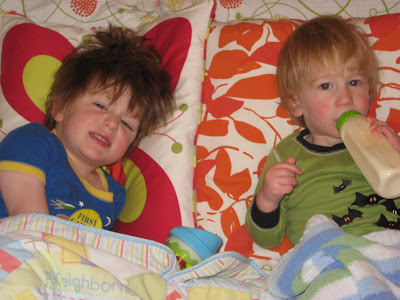 A little temperature check revealed that Tylenol was doing a good job of keeping Harry's fever at bay, and Jack was a cool 98.6. 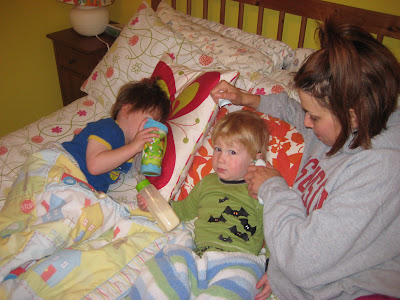 That morning Harry was grumpy, but I kept alternating Tylenol and Motrin which seemed to make him feel better. He took a nap 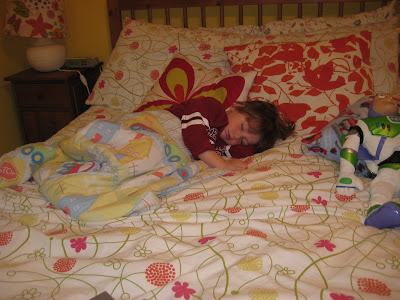 and woke up with some awesome hair feeling well enough to eat some cookies. 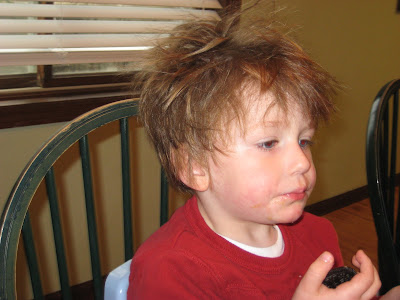 Jack was delightful but not as hungry as usual 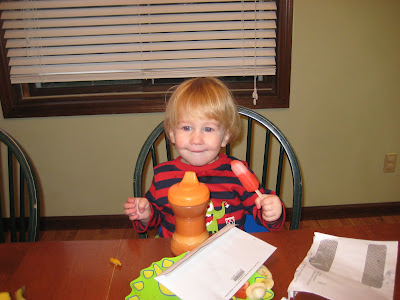 After dinner, Harry said he wanted to work out, so we let the kids do the BIggest Loser DVD while we cleaned up 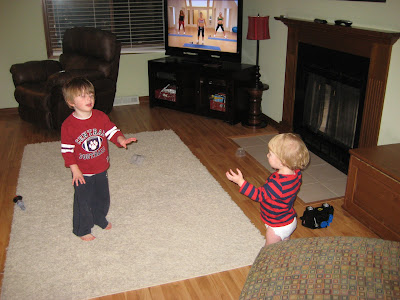 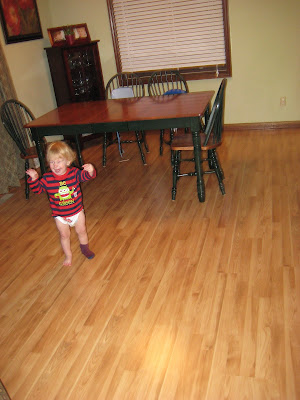 I stayed home all day Wednesday, and while my sweet potato and chicken stew was fantastic, my little Harry bear started to feel really terrible. His fever had been rising to the 102-ish range when his meds wore off since Monday, but by Wednesday night , he was refusing Motrin and Tylenol; his fever was scary high, and he was a mess. So we took this picture and posted it on Facebook: 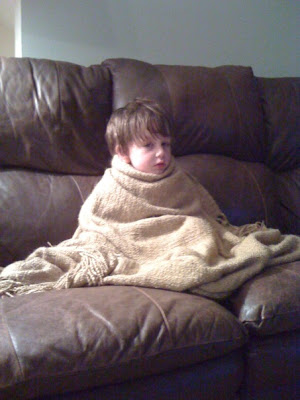 Wednesday night was awful mainly because Ben and I are both stupid and combative when the kids wake us up and also because Harry made himself vomit to avoid his meds and then Ben retreated to the couch and shivering, feverish Harry woke me up every six or eight seconds for the rest of the night. At 5:15 Ben thought he heard me calling for him, so he bolted upstairs and flung open the bedroom door to see me and Harry sleeping. Unfortunately, all the bolting and flinging woke up Jack, so he and Ben snuggled on the couch and got a head start on the day.

Thursday we spilt kid duties again, and Harry was a disaster. He absolutely refused to take ANYTHING and had a fever of 102.5. I made him stay in bed, but he really wanted to play 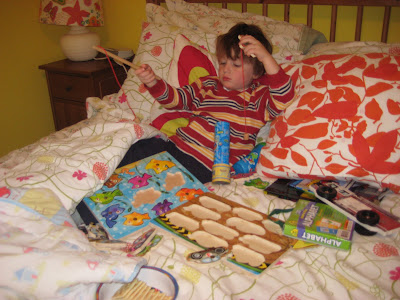 So he'd get up to play and just COLLAPSE. It was the saddest thing ever. 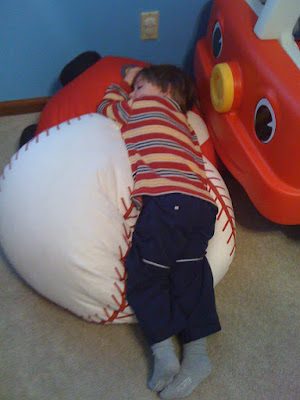 At some point it occurred to us that we should maybe call the doctor, so we did. Our nurse talked to us on the phone and told Ben to bring him in because his fever had been so high for so long. The pediatrician was like all bad news. He was worried because Harry's skin was so mottled. He said 99.9 percent of the flu cases they've seen lately are H1N1, so he didn't swab Harry but said he thought it was the piggy flu. He also told us that we were totally screwed and would get it way worse than Harry and that Jack was also doomed. At the end of the visit, Ben mentioned that we'd be back in a couple weeks for Jack's well baby visit, and the doctor laughed and was all "I bet I see you sooner than that." Rock on.

Today, Harry woke up fever free, and he's been that way all day.
Jack started out strong, but here he was in the late afternoon: 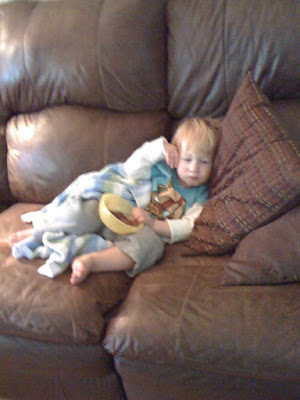 He projectile vomited all over the dinner table (Fab. U. Lous.) and went to be at 6:00 with a 101 fever.
As I type this? I have chills and a fever of my own. Ben just left for the store to stock up on things like Lunchables that we can just toss in the general direction of the children from our beds.
I'll keep you posted.
Posted by Sarah at 7:09 PM

Oh NO! You poor guys! Everyone. Those pictures are so pitiful! I hope you and Ben are miraculously spared!

O Sar - how awful this sounds. Really hope it gets better soon & you and Ben avoid getting sick!I've spent HOURS and HOURS thinking about your last post - really enjoyed it! That's what a great teacher is supposed to do, right?
Boo

omg. What a nightmare! That picture of Harry wrapped in the blanket is just so pitiful! You have me totally freaked out--E went to bed tonight with the beginnings of a fever. eek!

I hope you're ALL feeling better soon.

I am so sorry to hear about your family being sick. We are there too right now -- my husband came down with the flu today. Lots of the kids in his class have it as well. I also went grocery shopping tonight in case we are both sick at the same time, but hopefully my Cloroxing the heck out of everything he might have even looked at means the rest of us won't get sick....