So Ben was out of town for work (which SUCKED for me, and since it's all about me all the time: Waaaaaaah), and Harry came in my bed at 4:18 this morning. He didn't say a word, just snuggled up to me and threw his arms around my neck. And started squirming. And kicking. And tossing and turning.

"Harry," I said. "If you can't stop moving around you'll have to go back to your rocket ship." I meant to say fire truck, duh, because the kid sleeps in a fire truck. I have no idea where rocket ship came from. Harry stiffened as soon as I said it and started to cry.

Because it was 4 am and I was as dumb as a bag of hammers it took me a few minutes to figure out what was going on, which was this: He had a dream about evil aliens (thanks to the Scooby Doo "Space Ape at the Cape" episdoe that he watches over and ove even though it is clearly too old for him) abducting his dad, and when I mentioned a rocket ship, he thought his dream must have been true.

The dramz. It is like we live with a teenager sometimes.

And a very serious toddler. 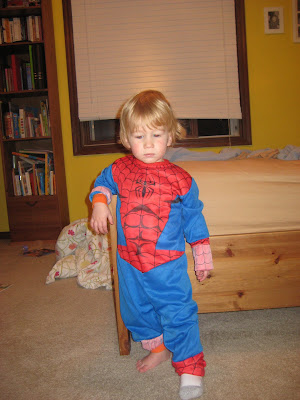 Jack was so happy to see Ben at swim lessons today. The little traitor screamed Dada and affixed himself permanently to Ben's lap, periodically scrambling up to cover his dad's face with kisses. He's a daddy's boy for sure, which is cool because as I was walking Harry into school the other morning, I asked him who his favorite person in the world is, and he replied without hesitation, "You are, my mama." 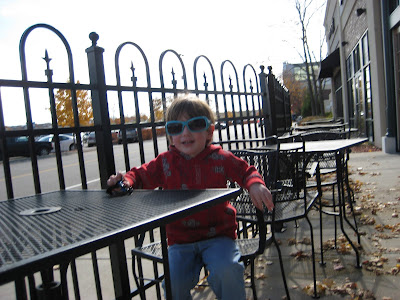 That's why we'l have to have another someday. To break the tie.
Posted by Sarah at 12:37 PM

And to use all those car seats. :)

Yeah! Then you'll know who wins!

What a sweetheart. I love it when they stop whining long enough to say something nice.

I am guessing the rocket ship came from buzz light year....

Oh, and traveling husbands - no fun!

And Harry is so sweet!