Dude! You Guys! It was ROSEOLA! 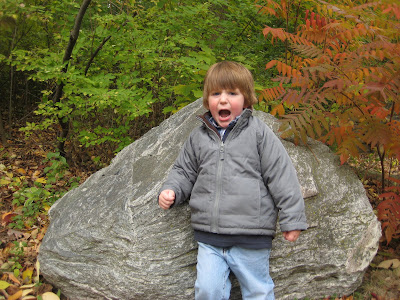 When Harry broke out in a rash all over his trunk this morning, Ben and I high fived each other and screamed, "That wasn't swine flu after all!!" We weren't sure if he had roseola or strep, but we figured it was a win-win, really. The nurse at our pediatrician's office swabbed Harry for strep, but our doctor (who luckily had Sunday hours this morning) didn't even want us to wait for the results. He took one look at Harry's spotty tummy and back and said the r-word, and we were ecstatic.

On Thursday when Ben took the kids to the doctor's office, Harry gasped when the garage door opened. "How long has it been raining?" he asked. "Oh my! The leaves are turning colors! How beautiful!"

"How long has it been since you went outside?" Ben asked. He decided right then that as long as Harry was fever-free when he woke up on Saturday, they would go to the nature class they've been signed up for, if only so Harry wouldn't forget what color the sky was.

Harry was excited and very bundled 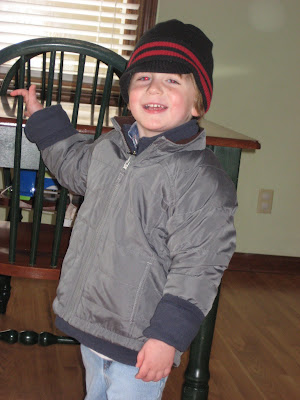 He cavorted merrily through the park 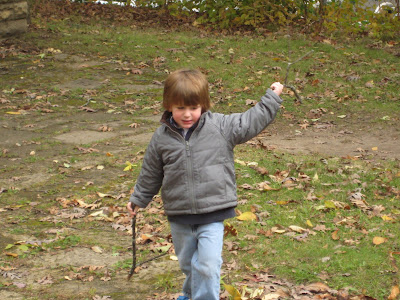 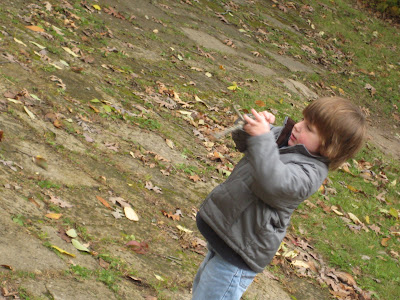 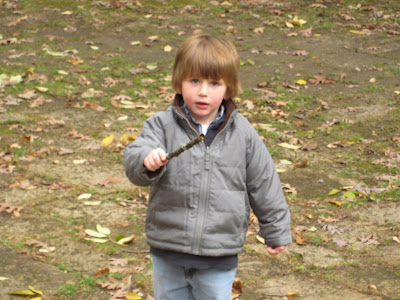 collecting sticks and leaves in a foil pan. 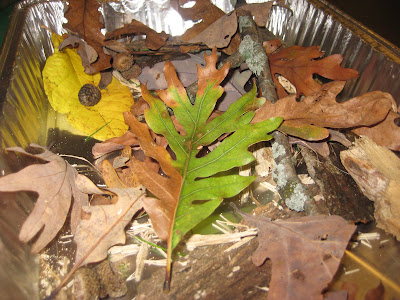 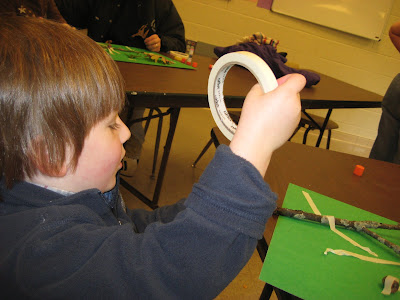 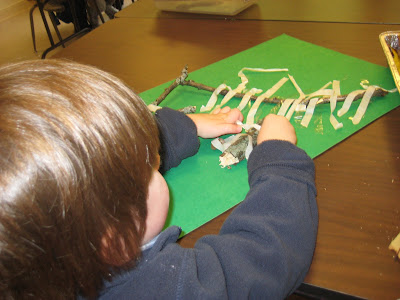 We put his 2 giant collages on his downstairs art bulletin board and now every time we enter or leave the house, we have to "Touch the soft wood. Touch it. No really you guys, TOUCH THE SOFT WOOD. IT IS SOFT. TOUCH IT!!"

So, yes. He is fine. Jack is still crabby and running a low grade fever. He also has a rash on his face and just looks so generally shitty that the doctor actually started examining him, assuming that he was the sick one. Once he realized his mistake, he peeked down Jack's throat and in his ears but found nothing. Jack, though, was happy to be checked out and said "ahhhh" without being asked.

Tonight before bed, Ben noticed that Jack is getting 4 more teeth. The poor kid. His whole life teething has been rough, and he always gets his teeth in 4s.

Jack slept poorly Friday night, and Ben brought him in our room and then ditched me (because I was suffering from phantom flu symptoms that have since disappeared with H's new diagnosis, and Ben assumed that Jack and I were both sick and he should act to save himself). Jack was a very snuggly and aggressive bedfellow, but as I tucked him into his crib on Saturday, I told him if he felt yucky and wanted to sleep with mommy, he should cry or make some noise and we'd come get him right away.

Ben, Harry, and I popped some popcorn, grabbed a blanket, and settled down on the couch to watch Monster vs. Aliens. About 10 minutes in to the movie, Jack started crying, and we ignored him for a little bit, but we felt bad for letting a sick kid cry, so Ben went up and laid with him until he fell asleep, then he transferred Jack into his crib where he woke up and screamed indignantly. We watched the movie with sad Jack in the background for another coupe of minutes until I hit my forehead and yelled, "Duh I said he could sleep with me! He wants to sleep with me!"

Indeed he did. He wrapped his little arms around my neck and pressed his face next to mine. I went to bed at 8:15 last night, and I brought Jack downstairs to Ben at 6:15, and I swear to you I only slept about 3 of those 10 hours. The rest of the time I was head butted, jabbed, kicked into a teeny sliver of the bed, and screamed at-- Jack yells and flips around in his sleep; it's very unsettling. I don't know how Harry puts up with him.

At one point I woke up after a particularly forceful collision of his head and my lip-- I actually bled a little-- and looked at him lying flat on his back on my pillow, his arms and legs akimbo, his mouth wide open, his hair curling up over his ears, and I was suddenly not uncomfortable, exhausted, or exasperated. I was just grateful for our night together.

Note: When your menu contains both tuna fish sandwiches and frozen pizza and when under the heading "Friday" you have written "Who cares? It's only Sunday," your menu is not worth sharing.
Posted by Sarah at 7:14 PM

I will never forget when my son was a year old and had 104 fever for the first time, and for three days straight and I was so shocked because the doc wasn't at all worried. Then the tell-tale rash. You've got to wonder, why couldn't the rash break out the day BEFORE the fever started, and make everyone's life a little easier?

I'm so glad it wasn't swine flu, or even normal flu, and that you're all on the mend!

The last part was hilarious!! Wes is a snuggler on his top half but his legs always have the wiggles. He is impossible to sleep with!

So glad everyone is getting better. And that you got Harry outside! The nature class looks awesome.

Glad everyone is on the mends! I totally understand the sleeping with a toddler thing. Luckily, I can normally start us off on one edge of the bed and move over once she is asleep so I get a few more hours...

Very glad to hear it wasn't the pig flu and I have to say that Harry looks a TON like you in those pictures.

So relieved it wasn't piggy flu! And I love Harry's enthusiasm for the wood. Hilarious.

Ethan sleeps like Jack--it is a full contact sport for him. I've gotten used to it, but Husband cannot deal.

glad you all seem to be on the mend. ANd I totally know what it's like to sleep with a big time squirmer - my daughter is just like that. I so badly want to let her sleep in my bed sometimes, but I know I'll never get any sleep so I don't. By the way, I picked you as one of my recipients for the Honest Scrap award on my blog. check it out for info.