Falling into winter. Next thing you know, I'll break out the Uggs.

As I type this, Harry and Jack are enjoying what started off as a healthy breakfast-- oranges, oatmeal, eggs, milk-- but became an unabashed sugar fest with addition of chocolate chip cookies that jack helped me make last night. He was so proud of them and so excited to share them with Harry (who missed baking night because he and Ben went out for ice cream. In the cold. Because they are crazy.) that I couldn't resist. MOTY.

Hard to believe that this little guy is 18 months old. Full on toddler. Because he is the second child and I am a little more lax with deadlines, I missed the enrollment date for the 18 month preschool class at Harry's school (that meets for 2 hours once a week-- rigorous academic curriculum, I'm sure), so we'll have to wait until January for Jack's formal education to begin. Which means more Big! Red! Mat! fun for me in the meantime. 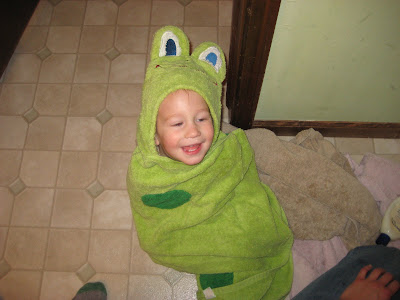 And Harry. Despite school and big boy pants and David Cassidy hair, he's still a baby, too. 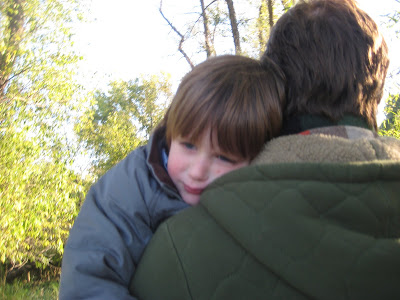 And now I am passing the cookies out like they're (I don't know-- what's something you pass out? Candy?) so I can keep typing this, even though I have nothing of consequence to say. 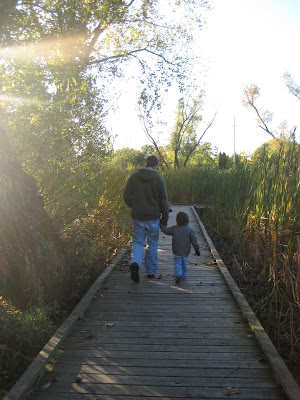 Um, it is so cold here. Like 30-40 and rainy/snowy. And this is the first time in their lives that H&J have normal-weight Halloween costumes. They've always sweated their faces off in those super puffy stuffed costumes, but this year, as Buzz and Woody, they're going to need coats or snowsuits over the top. 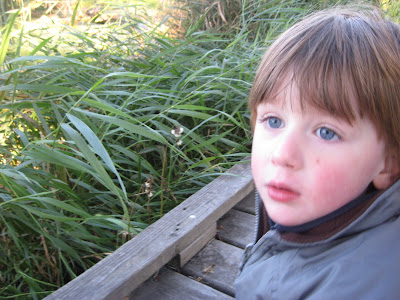 Love the slide static. Especially with Harry's mop. Which? Okay. Needs a trim. I know. 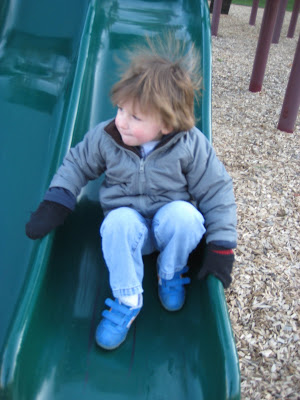 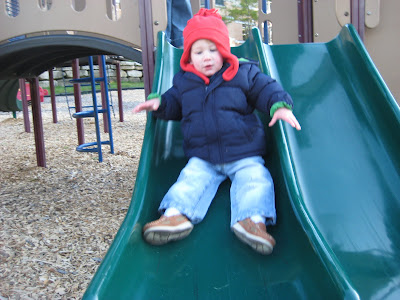 Jack's not a big fan either. 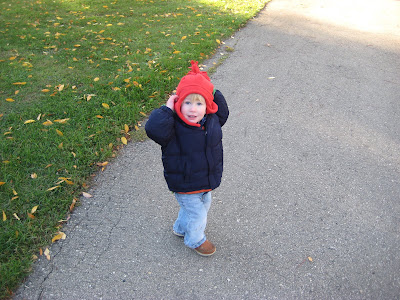 Kaleb will be Buzz this year, too!

you really are MOTY taking time with each of your sons..I couldn't be prouder of you and Ben and your parenting skills...Bomma

But puffy coats are so cute! We seldom need more than a fleece and a winter hat down here.

I am so ready for real fall and for winter! I like the cooler weather! But, we are in shorts here today :( Maybe it will warm up a little there before Halloween or you can put them in 2-3 layers under their costumes!

He looks so much like you in that last picture!

Oops. I already busted out the Uggs. And can I just say that yesterday my feet were warm and toasty all day long! I think I'd sleep with them if I wasn't such a "my feet need to breathe while I sleep" whack job!

they are so cute. Can't wait to see their halloween pictures!