I spend a lot of time complaining here-- especially, it seems, about Jack (He cries! He cries a lot! He eats! He eats a lot! I no sleep good no more! Wahhhhhh). But allow me to take a moment and also complain about this guy: 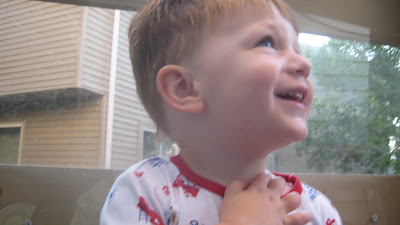 I know, right. How could I? He's so darn precious. And this is certainly true. Case in point: He was holding Jack yesterday, and Jack started to cry. Harry said, "It's okay, Jacky Jacks. Harry feed you," and he lifted up his little shirt to nurse Jack. (And if you think this is weird, that's okay. Ben was creeped out at first, until I reminded him that if you replaced "lifted up his little shirt to nurse Jack" with "gave Jack a bottle," no one would bat an eye at the adorableness.)

Last night before bath, he noticed that his little potty stool has handprints painted on it, and he screamed, "A clue! A clue! A paw print! The first clue!" (Yeah-- he's a little into Blue's Clues these days.) Then he sat down to contemplate the meaning of the clue and said "Hmmmm, where my table go?" because the stool matches a cute little craft table (that has been disassembled and tucked in our downstairs storage to make room for seven thousand and one other large plastic toys), and he thought the paw print was a clue to the table's mysterious disappearance.

The other day, he was talking to his grandma on the phone, and she asked him what he was doing. He replied (honestly and with a grunt) "Nothing...pooping."

I mean, these are all examples of how wonderful, funny, and entertaining he is. And just today, on the way home from the splash park, he sang along to "My Humps," and knew all the words.

But then there's the 2 year-old part: the whining, the tantruming, the shouting/screeching/bellowing, the not-minding part. Seriously, between him and Jack, the NOISE is shattering my nerves-- I am all jumpy and shell shocked all the time.

Harry's doctor told us to treat everything like a game, and it is true that a playful, imaginative approach jollies him out of most meltdowns and staves off the boredom that causes that heinous screechy whine. But sometimes? He annoys me so much I just don't want him to smile, you know?

Like when he wakes up Jack-- this literally makes me see red. Or when he doesn't do something I've asked him to that I know he can do, like putting on his Crocs or picking up his sippy cup. Last night, he freaked out because he wanted some pudding, and we told him he needed to wait for us to finish eating, which became a Thing That We Stuck To, Gosh Darnit, even though none of us enjoyed the rest of our pork chops and pasta salad over all the whining pleas for "Pudding, mama! Pudding now! Harry needs pudding!" We finally gave him the pudding, and he said (the most annoying phrase in his vocabulary) "Boom, yucky, yikes! Harry needs ice cream," and tossed it aside. Grumble. grumble. (Also, who does he think he is talking about himself in the 3rd person? Suede?)

So how do I keep it together? Well, I always use my inside voice (most of the time), and I pretend that I am being watched-- the audience is undefined-- other parents? Supernanny? Myself in 10 years? It doesn't really matter. The point is, I gotta do something to keep from freaking out, and this works for me because I am a narcissist. Also, I try really hard to laugh or at least smile when I'm starting to get nervous, and I have stopped caring about getting places on time.

Ben's really good at keeping his cool and sense of humor, too. He does get agitated when a stray kick lands in the general direction of his down-theres, but that's understandable. Hey-- happy anniversary, sweets! I love you.

When the whining has reached a fever pitch, or the milk has been flung on the floor for the 42nd time, or the sleeping baby has been de-napped again, 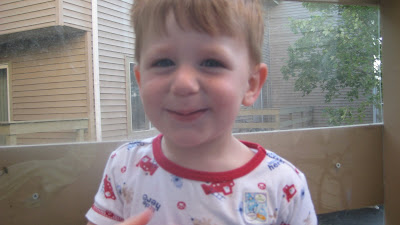 I look at him, and luckily, he still melts my heart and is fun to squeeze.

What about the rest of you? How do you make it through toddlerhood?
Posted by Sarah at 9:07 AM

We haven't reached toddlerhood yet of course. But I amazed by one of my friends who has 4 kids, and number 5 is due in September. The oldest is 6 1/2! She is amazing - so I am taking notes when I can. Her kids aren't perfect, but I see how she and her husband are training them, and I am amazed! I think the big thing is to set rules and consequences and then stick to them. Make sure the consequences are understood ahead of time and are appropriate, and eventually (hopefully) he will learn what you expect!

GOSH I know exactly what you are talking about!! First spilled cup gets eye contact and an even toned "Charlie, you need to be careful with your cup." Twenty-fifth spilled cup gets an exasperated "DUDE! WHAT THE HELL?" Maybe I should try that pretending I'm being watched thing. I do my best to remember that most of the time he doesn't know he's doing anything wrong and try not to let the frustration build from incident to incident. Because there are a LOT of incidents these days. And even though he is 21 months old, if you ask him how old he is he says two.

I do see some signs of progress though... mostly in the form of him showing remorse after doing something he knows is wrong, like rock throwing, or doing what I have asked him when I start to approach him (with the goal of coercing him to do whatever it was). So maybe he sort of gets that I'm in charge? I wonder whether that's really true many times a day.

She spies the Dora yogurt when I open the fridge to get something for dinner prep and insists on eating it. I open the yogurt, put her in her chair, turn back to make dinner. Splat....."No Mommy, Mimi nice cream".
Ugh. I can deal with giving her a little pre dinner yogurt. Pre dinner "nice cream" is so not happening.

I love the idea of imagining someone is observing your interaction. I'm going to have to try that tonight...... after the yogurt hits the hardwood.

He is so cute! This phase will be over soon and he will be wonderful again! And right now he thinks you guys are AWESOME! Don't worry.
Of course, in 10 years, he will act like this again. But this time he will be bigger than you! And he will think you are STUPID and an embarrassment! At that time, you can worry.

Actually, I like your idea of imagining I'm being watched, because these days I am mortifying myself with how often I am using my NOT inside voice...maybe I could contain my inner beast if I felt like I was being judged (by someone other than myself LOL)

And I agree, Ethan makes me see red and makes my hands itch to spank him, but then he will give me a look and it all just melts away into "OMG, you are the greatest thing that's ever happened to me". So strange.