He's pretty thin-- maybe that makes it easy for him to whip his little body around. In any case, he's a roller!! From tummy to back, in case you were wondering. Then he needs hep getting bak to his tummy, and he gets more than a little annoyed if that help is not forthcoming.

Here he is chilling on the beautiful quilt that Bomma made him. Harry was pleased to learn that he also had a beautiful baby quilt, and he lounged on his as well. 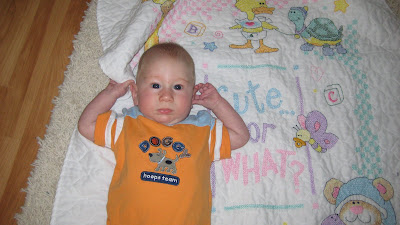 He also needed a pacifier, which he chewed on like a cigar. 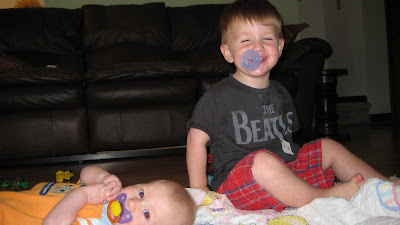 Hi. Let's talk about the fact that it is AUGUST. Um, where did July go?

I have 3 weeks to get my class totally ready and buy some non-mom clothes. Also, maybe a bag that is not Vera Bradley because I feel like the VB bag makes you look like you probably wear really large underpants, you know? Oh. And I need to work on that little thing-- what was it called? Sounds like "More painful than med-free childbirth... ." Oh Yeah! My dissertation.

Sure, sure, I won't be in the classroom this year, but I still have to work 2 afternoons a week (the inhumanity, I know) and find time to re-write-- and all this rewriting has to be done without the aid of giant Panera cinnamon rolls because I am not pregnant.

Oh-- one more teensy weensy problem: What the eff is jack going to EAT when I am away from him for 6 hours twice a week? (I actually work 3 days a week, but one of those days, Jack is coming with me to feed and help me revise-- he's such a critic.) I mean, Harry will probably have mac and cheese and bananas, but Jack seems too young for such fare. I really don't want to pump because seriously. I screwed up my hormones and my sanity in ways you cannot imagine last time with my Pump in Style (a note: that bag does NOT look like a stylish purse, and I don't care who says it does). Part of that could have been the mini-pill, but still. I hated the pump (and it hated me, too). I may have to pump a little the 2 days I am in the office, but I'm not going to save it, freeze it, or count the ounces, all of which amounts to a one-way ticket to crazy town. So, I mean, duh, I guess he'll eat some GoodStart, but so far, no good. Even though he has an Adiri bottle that looks creepily like a boob (and, like a breast, is BPA-free). I also have some Enfamil in the cabinet-- do you think I should also try that? Would he have a preference for one brand over another? And does it really matter? In the end, won't he just eat if he's hungry?

Bah. My job is amazing, and I love it, but it would be slightly easier if I could take Jack with me everyday. And please-- I know. I am lucky to only work 3 afternoons a week and luckier still that Jack gets to come one of those days. Also, I have the best insurance benefits in the country. BUT part of me wants Jack to be strapped to my person 24/7 for the first 12 months of his life. Those 12 hours a week are going to be really long without his head to sniff and his cheeks to kiss and his tummy to zerbert. Plus, it has been so long since I have had two hands to use for whatever I want, I am not sure what I will do with them... 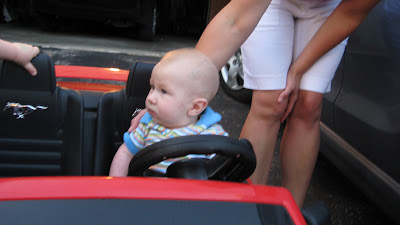 See, he's driving already. Next thing I know he'll be married.
Posted by Sarah at 8:01 AM

AJU5 had Infamil when she was a few days old and in the NICU/Special care nursery. At that age, i don't know how much she noticed the difference between that and my milk.

Also, he will be 4 months old, so he might be old enough to start some cereal (I did with AJU5 when she was 4 months old), so that is an option!

Pumping will make you crazy!! Right before I gave up on pumping at 10 months I had Ryan bring me my pump at 1:00 in the morning (he was up because he was finishing his dissertation) so I could squeeze out a few extra ounces and Charlie wouldn't have to eat one single drop of formula. What the hell was I thinking? Gah! Your job sounds so perfect, I am really jealous! Of course if I could get my act together and fill out some applications I might be able to do something similar. Funny how those department chairs aren't out combing the suburbs for TA talent, ya know?

Pump once a day while at work without Jack. Don't freeze & don't worry about the amount. Add formula to his bottles while you are away, if needed, to get the correct amount.

It will work out!

OMG, pumping is the WORST!! I had to pump exclusively for the first month of E's life, and HELLO, PPD! It is hell.

He's skinny--any chance you can just tuck him in your shirt and take him with you to work? ;-)

love the pictures, but Jack is so much cuter than his pictures show..Harry looks great, and so does all the family....Bomma