What the Sheep Says

"No! Don't put me in the red tube again! I can't breathe in there! Please don't close the hatch!"-- that's what Harry's sheep says. 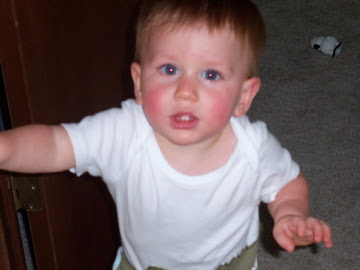 Notice the abandoned sheep in the corner of this picture? A terrible fate awaits him when he is once again noticed.

Harry can make his first animal noise, a rather anticlimactic "ba." He has a sheep in his Little People Farm and also in his Animal Shapes book. He's never shown any real interest in animal noises, although he loves to shove the sheep head first into his Little People Silo (along with all the other animals, the farmer, and the pilot, tourists and luggage from his Little People plane), hence the sheep's aforementioned plea. Recently, however, he has taken a real shine to "Old MacDonald" in the form of a hand puppeet book that he brings to us no fewer than 65 times a day, demanding "Eieio." We obligingly shove our fingers into the animals (a dog, a cat, a cow, a duck, and a pig-- a pretty crappy farm, if you ask me) and sing the song, but we usually make up other residents of Old Mac's place. Like the Harry, who says "This, this this," the mommy who says "Nag, nag, nag," and the Daddy who says_____ (*stare into space with mouth open*)-- also the monkey, the ghost, the robot-- just to give him a completely warped veiw of farm life. For some reason, though, the sheep is the one he likes the best. Ba, I say.

Also? Harry is totally into our stuff: 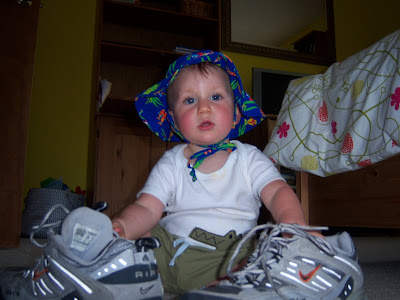 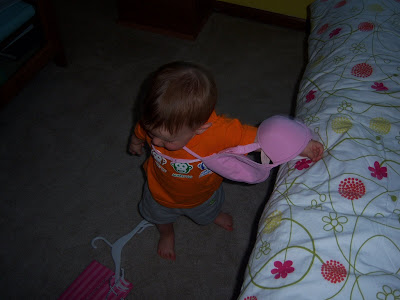 Hahahahaha! I don't know where to start... the daddy who says - stares off into space with mouth open- or Harry in a bra. Too funny!