It was supposed to be fall.  Like, all of the weather forecasts were for chilly air, and we saw the leaves start to turn.  The last day of the pool was so cold I was the only mom in a suit.  And I ran out and bought Dorothy a bunch of sweaters and tights and the boys a giant Old Navy bag full of athleisure pants. I ordered fall coats for all, and Dorothy and I got galoshes.

And then in turned 80 and humid and all the mosquitos came back.   GAH.

But, I mean,  have the premature forecast to thank for our MATCHING rain boots, so there's that. I hope to get her into Target this week to buy some shoes that are not high heels, so maybe there will be more matching styles in our future. 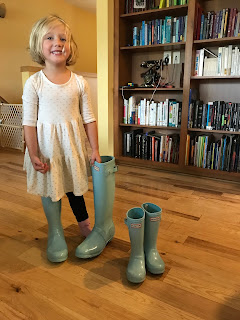 Harry has been eating a green smoothing in the morning before school.  While it's been a little disruptive to my morning writing routine, I genuinely love how happy and excited he is before school. 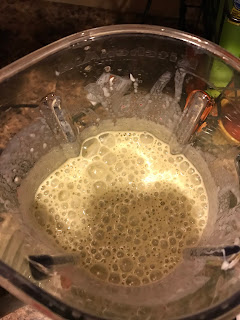 Speaking of before school.  It's really hard to get everyone out the door on time.  I actually forgot just how hard it could be. 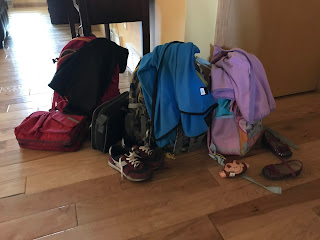 But darn if they aren't so CUTE all ready to go. 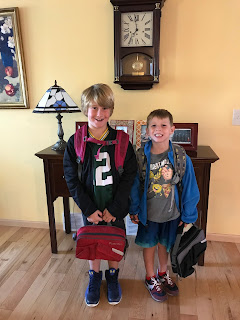 So far, Ben and I have tried to help out the work-at-home parent by also doing preschool drop off on our out-of-the-house mornings. This is nice because the other parent can stay in their jammies and keep working (since we are still both waking up before the kids to get a jump start on the day).  But our work volume is creeping up with each passing day, so who knows how long we'll be able to keep that up.  Le sigh.

It's fall almost, temperature be damned, so I have been baking my fall faves.  Like granola bars! 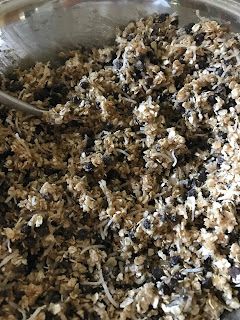 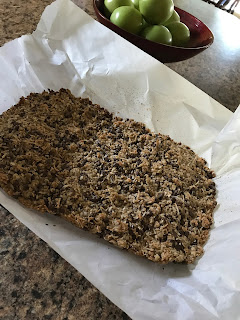 I am slow to adjust to new routines, and this semester is no exception.  Yesterday, I went to work and banged on my office keyboard wondering why nothing was happening on the screen for a good 15-20 seconds.  BECAUSE MY COMPUTER WAS STILL IN MY BAG, and that screen is just a monitor.  Duh. 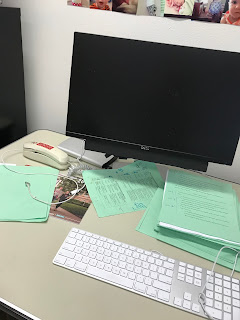 Last night, I got home from work at about 3:30, just as the boys were all getting home.  Dorothy was a total freaking wreck as she has been after school every day since school started (see: slow to adjust to a new routine), and Ben was ready to walk out the door to take Jack to baseball as soon as Jack changed his clothes.  They went to baseball.  Dorothy and Cooper tried to kill each other. I helped Harry with math homework (and by help, I mean, I tried to talk him out of right answers and asked him to use neater handwriting.  I suck) and supervised snack (they ate almost an entire pan of brownies, which is why on Monday night I baked 2).  I made dinner while Harry went to a friend's house and Dorothy and Cooper continued to brawl. The kids ate, and I cleaned everything up. Then Ben came home for like 20 minutes to collect Harry for hockey.  Jack changed from his baseball jersey to his Cub Scout t-shirt (which frankly pairs better with sliding pants and tall socks than does the button-down), and just as Ben and Harry were leaving, the Webelo Den came over for their meeting. Cooper joined them.  Dorothy did not, but she sure did join me in everything I was doing because she is an excellent sidekick.  The Scouts finished up their meeting with the other pan of brownies and trip to the school park.  Dorothy and I joined in for that despite the literal swarms of mosquitos.  Dorothy fell down and hit her head and chin on a metal balance beam, so we had to leave early for an ice pack.  Meanwhile, Ben dropped Harry at hockey and went downtown for a speech team meeting, leaving that a bit early to pick Harry up and bring him home.  Dorothy and Cooper fell asleep with no fighting or hijinks, a rarity since school started that I hope was due to an extra trip to the park and not a head injury.  Jack and I watched Gilmore Girls while we waited for Ben and Harry. And it was pretty much 10 pm before tBen and I got to see each other at all.  We sat on the couch with the TV off and dozed until one of us woke up enough to prod the other one into starting our nighttime routine (take the dog out, take the little kids to the bathroom for a sleep-pee, muck out Harry and Jack's bathroom after the wreckage of their showers, etc).

Dorothy enjoyed some bubble hat and mutton chops time in the tub. 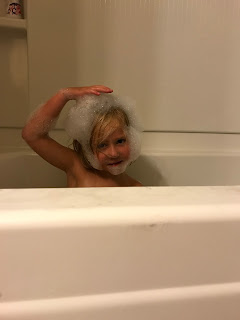 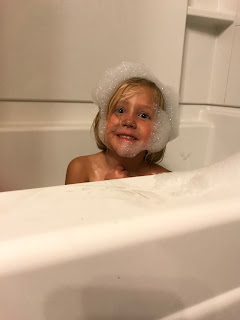 Damn. I will never complain about choir night again.