Thanks for your support.

Thank you all so much for your lovely comments on yesterday's post.

And!  I am having a really hard time actually HAVING a miscarriage.  I have scheduled a surgical consult for a D&C next week, but that's just the consult.  Who knows when I will be able to have the actual procedure?  And we might have to tell the kids because the whole thing is running into our spring break trip.

I wish our culture talked about this more because I want to know that my experience is normal.  Or that it's not-- either way.  I know a lot about reproduction but almost nothing about this.

(Side note:  When we were talking to the OB in the Bad News Room, she noted that I seemed knowledgeable about the terms she was using and asked if I was a nurse.  I explained that I wrote my doctoral dissertation about Planned Parenthood.  Ben only heard my side of the conversation, so he had NO IDEA why I would be mentioning that and just thought I was some kind of weird braggart.  It was pretty funny.  Ben has been pretty good about being funny but sometimes his jokes make me want to kill him.  Just a little).

But!  Life must go on.  I have work t do and parties to plan.

I LOVE taking Dorothy to the library.  She's so sweet and rowdy, which is an excellent combination. 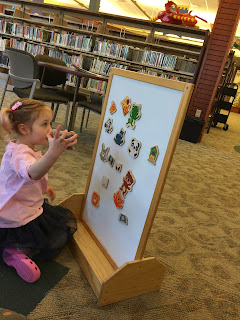 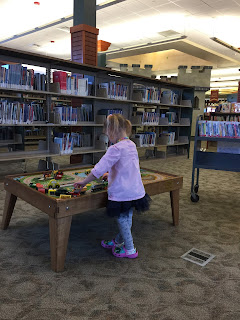 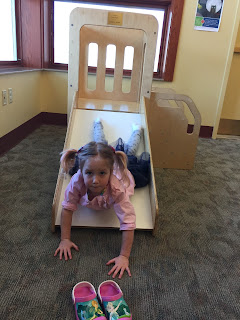 I planned to have a bakery make her birthday cake, and I bought this Troll doll to go on top.  But then I decided to just make my own damn cake using a bundt pan to made Poppy's dress.  I actually think this is a fairly terribly idea, by I am going to go for it anyway. 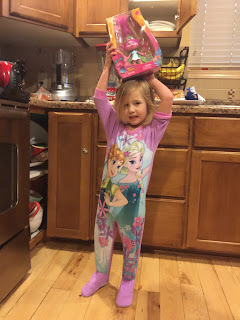 I decided to throw some muffins together for breakfast yesterday morning.  They were highly anticipated. 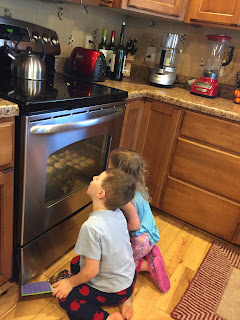 And a big hit. 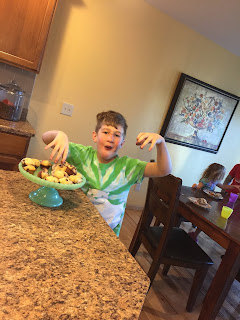 We had to stop by Harry's school for a state fair his class was putting on.  Each kid did a report on a different state.  Harry chose Alabama because sportsball.  On the way into his class, we saw his locker and died laughing: 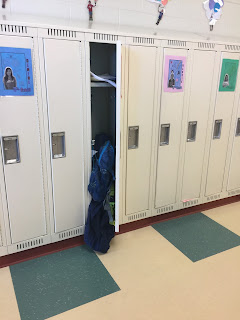 As you can see, Cooper was thrilled.  He thinks Harry is the coolest person in the universe. 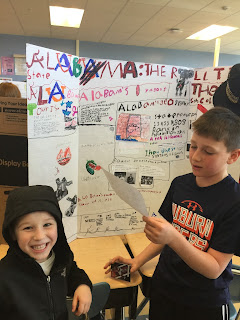 I was so committed to the Day Without a Woman yesterday. I wore red.  I visited a local woman-owned bakery.  Neither Ben nor I went to work.  And!  I crushed the patriarchy by boycotting gestation, even.  I laid in my room from 3:30 in the afternoon through the night and did no house or child work waiting for the second dose of Cytotec to work its terrible magic.  But it never did. 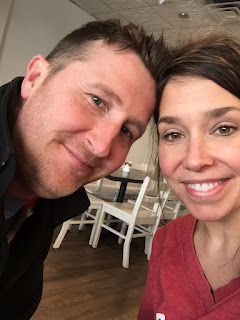 Seriously, I am so angry with Anthony Comstock right now.  If he hadn't made birth control into pornography, Margaret Sanger wouldn't have had to relocate it to the clinic to buy respectability, and I could get a tincture from a traveling saleswoman or one of my friends would be growing some menstrual-cycle-restarting herbs in her garden or when you buy essential oils from a Facebook friend there'd be an oil that would help this interminable process.  Gah.  I want some closure here, you guys.  No one ever told me that  this could take weeks, and it's all just so sad.
Posted by Sarah at 1:35 PM

I've never had a miscarriage but many of my girlfriends have and it has taken awhile for some of them and two have had to have D&C's because it just didn't happen for them, so I think what is happening to you is "normal". Also, screw Cytotec! It's the devils drug. Sending you good vibes during what I'm sure is a difficult time.

Hang tough, I had to have a d/c because my body wouldn't do its job. Its not horrible but still. Its not a club anyone wants to join.

Mine started naturally but lasted FOREVER. It sounds like you're in the normal zone. The waiting part has got to be awful though. I'm sorry. And I'm sorry that you might have to tell the kids. That sucks on top of all the other sucking. Kids at least are pretty egocentric so they will mostly be angry about the trip? Or you can buy them off with a movie night and ice cream?

In other news, I'm guessing the Poppy Bundt cake will be a huge success. I'm picturing it like the barbie cakes, which I secretly love an awful lot.

I've had one miscarriage. When I thought it was almost over, I started bleeding more than I ever had before. I think the whole thing took two months. So what you're going through seems normal.

My doctor told me it could take up to a month if I did it naturally. I opted for a d&c just because I couldn't handle it mentally. Either way it all sucked. Hang in there.

Mine took about 4 weeks from the first bad ultrasound (at 6wks gestation) until my body passed it naturally... Then my doc wasn't sure it was complete so I ended up with the D&C anyway...

I am so sorry for your loss. I never had a miscarriage, but it took us 13 years to conceive our little girl, who is now 7 years old. I do know of the heartbreak of answers unknown. Sending hugs, prayers and love to you and your sweet family.

So very sorry for your loss.