From my bathroom window this morning, I watched Jack go to his summer enrichment class at school, and he skipped the whole way there.  The whole way.  Seven is cartoon-cute, and lucky lady that I am, I have 2 more sevens to look forward to.

Cooper still-- at almost 4 years old (in September)-- does not like to poop in the potty.  He will take off his underwear, put on a pull-up, do his thing, and politely request help changing himself.  All of that seems way harder than pooping in the toilet.  To me anyway.

Dorothy likes to drink the pool.  No, for serious.  She thinks it is delicious.

She is just generally the funniest little person ever.  It's fun to hang out with her because she is so chatty and generally agreeable.  She also has the ability to spot a piece of Frozen merch from a mile away.  No way am I going to be able to get her a cute little Lands End monogrammed backpack to match everyone else's for school next year.  Nope-- a $19.99 glittery Target special with Anna and Elsa on the pocket is screaming her name.  I ordered her a Frozen beach towel last night n Amazon so she will stop trying to steal kids' towels at the pool.  She wears her costume dresses almost everyday.  And!  She will only drink from a Dora cup and wear Thomas the Train diapers.  She asked me for more princess diapers from "Caco"(Costco) and I thought the way she said the store was so cute, I wanted to hear it again.  I said, "Where are your diapers from?" She was confused and said "My butt."  Ha!

Harrison is taking a break from organized sports because the soccer  and lacrosse seasons are over, and we just couldn't commit to 4-day-a-week baseball after coming off six months of 4-day-a-week hockey.  He has hockey practice on Wednesdays and that's it.  I think the lack of team play is driving him crazy, but he is filling the void with daily swimming lessons and hours and hours and hours of basketball in the driveway with a little wiffle ball thrown in for good measure.  He has also rigged up a dummy goalie made of skateboards and assorted garage crap to hang out in his hockey net at the end of the driveway so he can practice shooting the puck higher into the net.  He's excited for soccer and hockey to start back up again and flag football, the love of his life since we won't let him play tackle yet.

He also finally FINALLY learned how to dive off the diving board-- he has spent the last 3 years straightening up mid-jump. 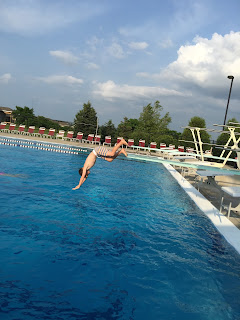 As you can see, Beatrix is as rowdy as ever. 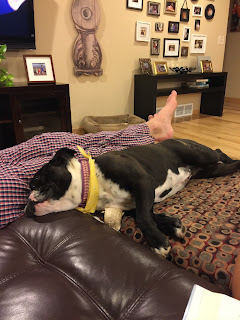 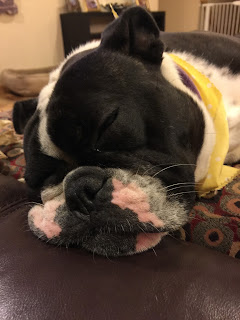 And wonderful Ben is still wonderful.  He grilled salmon burgers in a lightening storm and then wrapped them in CSA lettuce leaves and chopped up all kinds of fresh veggie garnish and made me a Bacardi and Diet Coke because he knew I was hangry and had already counted my dinner calories and wouldn't be able to cope well with a menu change, despite the weather. 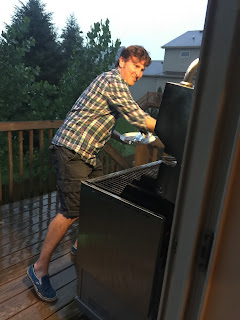 It is too cold here (mid 70s) for me to take the little kids to the pool because no way in hell am I getting in the water even though the pool heat is high, and the water is at least 85 degrees   So we have had to find other things to do with our days.

Luckily, we have swim lessons every morning, where I sit shivering in the sun in a sweatshirt and all 4 crazy kids swim-- 3 in lessons and Dorothy splashing in the shallow end. 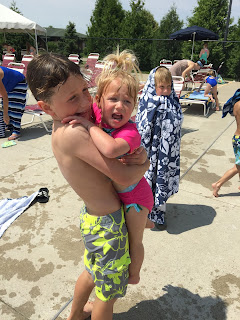 Cooper fell down in the parking lot the other morning on the way in, and he tried to swim, but his skinned knee was just too much for him.  He also told me and Ben he could walk because of his "really, really, really bad owie," and we were concerned for a few seconds before we realized he's a huge baby.  But doesn't he look grown up (except, you know, for the pacifier)? 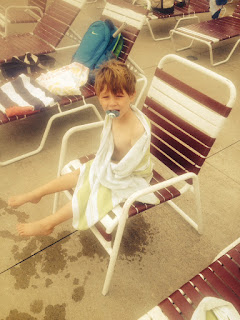 Oh, and also, Dorothy got a new bikini: 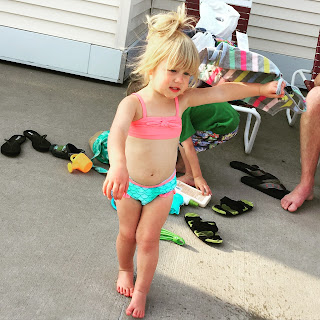 But I feel like an asshole putting her in it during the day when the boys are wearing LONG SLEEVES, so she has only worn it at night.  We love taking the ikds to the pool after dinner.  Neither Ben nor I gets in; we just hover by the side and watch Cooper swim (floaty vest free thanks to lessons) and Dorothy bob in her Puddle Jumper while Harry and Jack jump off the board and go don the slide, respectively.  Jack remains terrified of the diving board and Harry is too cool for the slide.  he likes to infuriate everyone in line behind him by inching down centimeter by centimeter.

Yesterday morning, I was on my GAME.  I made pancakes (plain and chocolate chip) and bacon WHILE THE KIDS WALKED THE DOG.  Why can't I be that awesomely efficient on real school mornings? 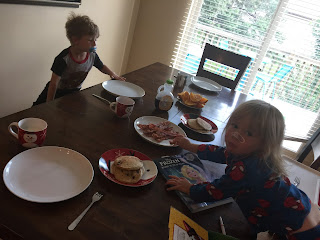 In the afternoon, the kids and I went to the zoo.  I love our sweet little free zoo, and its newly renovated arctic area is truly great.  But because it is free, it's always PACKED.  And yesterday we spent $10 riding the train and another $10 on TERRIBLE photo booth pics.   So, not quite free.

We came upon these little gray donkeys with black striped legs, a recent addition, and Harry said with great authority, "Those are zorses.  They are part zebra, part horse, and they cannot breed."  I TOTALLY believed him and was excited about checking out the liger next. 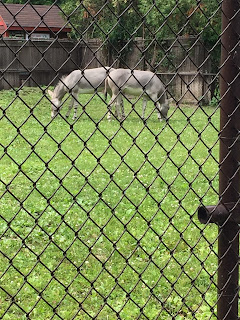 But then we came upon the sign, and it was EVEN BETTER THAN ZORSE 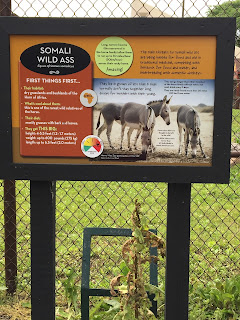 They had a totally hilarious conversation about whether or not they could say ass when they told their friends in art and Lego class about this animal. 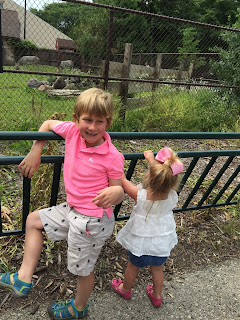 Harry and Jack rode the carousel, but Dorothy didn't want to, and Cooper is too short to ride without me, so we had to watch,much to Cooper's disappointment. 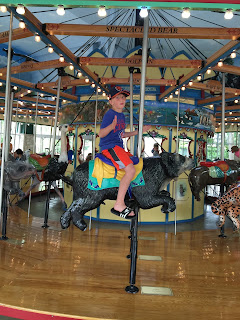 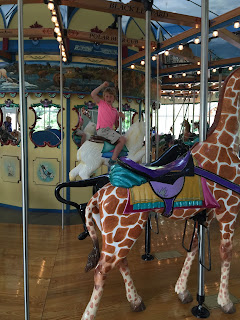 But then we all got to ride the train. 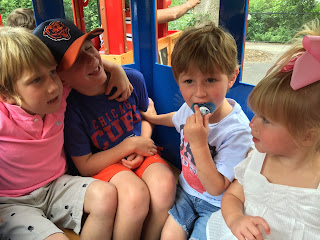 Today, I am spending the morning working on my online class at the library.  So, um, that's what I am going to do right now.

Heck, the boys too!

I love the picture of the 4 kids on the train and the one where Dorothy has bacon in one hand and a Frozen book in the other.