Another broken nose? What are the odds? 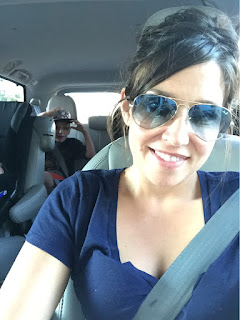 We took the kids out to dinner after baseball on Monday, an hour past their normal dinner time.  And even though it was late, we went to a sit-down restaurant.  And even though I am trying to eat 1000 less calories than I burn everyday (which has turned me into a person who works out for AT LEAST 90 minutes a day everyday), I had half a cherry bomb margarita because DAMN.

We ran into Walgreens after dinner to replenish our Tylenol supply because EVERYONE HAS BEEN SICK (seriously, Ben is at the doc with Cooper right now because Cooper's swimmers ear drops aren't working and we leave for vacation in 6 days), and I took a couple of selfies trying to decide which one to put on Instagram because I felt like I looked so awesome in my new sunglasses. 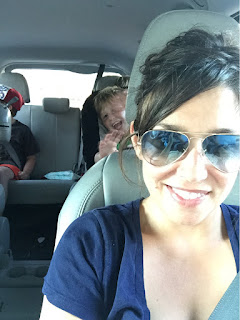 And then as an obvious punishment for my vanity, when I was putting Dorothy to bed, we were snuggling on my bed, and she raised her head then fell dramatically back against the pillows.  Only she didn't land on the pillows.  SHE LANDED ON MY FUCKING NOSE and broke it. 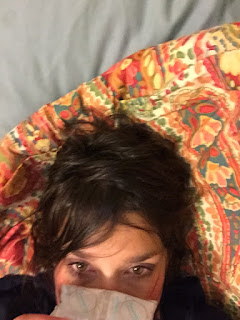 I started screaming hysterically and cupping my hands around all the blood.  Ben put her to bed, and I sort of sobbed and put a towel and some ice on my face.

I heard the revolting crack, so I knew instantly it was broken.

Urgent care closed in 20 minutes, so I couldn't get an appointment.  Rather than go to the ER, I iced it and took Ibuprofen and saw a doctor the next morning.  The x-ray tech had to take 3 films of my nose, so I am never getting dental x-rays again because holy shit that was a ton of radiation my face.  The doctor looked at the films, felt me nose, checked the inside for blood clots, and confirmed that it's broken.

Luckily, the bones line up really nicely still, and it should heal OK in A FUCKING MONTH.  Until then, it hurts.  Especially when I laugh (Seeing Trainwreck last night was brutal).  The doc said to avoid holding the kids on my lap at Disney on any rides.  Yikes.  Basically, it's just important that I not re-injure my nose between now and whenever it un-swells and stops hurting.  Good times.

So gross and painful you guys.

I told Dorothy the next day, and she put her hand on my shoulder and said, "Oh honey."

Then later she asked me to "eat my yegs" (eat her legs) and of course I complied because BABY LEGS ARE DELICIOUS and she kicked me a little in the face, and I said "Ow!" and again she patted my shoulder and said, "Oh honey.  You broke-ed your nose."  She's hilarious.

The whole reason we were having bedtime snuggles in the first place is because I decided to stop nursing because she is 2.5 and I am totally over it.  But she was not.  But I really wanted to bleach my teeth for the first time in forever (shut up-- the vanity, I know), and I need to not be nursing for that.  So.  I am not nursing anymore but now I don' care about my teeth because of my fat ugly face.  Damnit.

Also, for those of you playing along at home, YES, the same thing only worse happened in 2009 to Ben.  Remember?  And for all of the shit he gave me this week on FB, I was super snarky about his broken in face in several posts.  Like this one, this one, and this one.
Posted by Sarah at 11:22 AM

The new sunnies are pretty awesome...