Have I told you guys about the time on our honeymoon when my ears were clogged with water and they hurt so bad I had to see the resort doctor?  And he was this super young, hot guy?  And he had to wash my ears out because they were full of wax and my brand new husband held a basin at my shoulder while fetus-sized chunks of gunk came out of my ears?  It was SO ROMANTIC.

This past weekend, I spent a lot of time taking Dorothy and Cooper down the water slide and going off the diving board (and I wasn't even day drinking at that point-- I KNOW), and starting yesterday morning, my ears were totally clogged.  I knew if they didn't unclog by this morning, I would have to go to the doctor, probably for an ear wash.  And they didn't, so I did, with ALL OF THE KIDS.

I mean, it is almost our 10-year anniversary, so I guess it was time.

(Seriously, you guys, I have weird ear canals-- it's not that I am filthy.  I use drops and everything, but nothing ever comes out.  Let's not talk about this again, okay?)

Anyway, it totally sucked OF COURSE to be in a tiny room with all of my kids, and the nurse was super pissy because she couldn't take my pulse or get my blood pressure effectively because the kids were all over me, and I wanted to be an asshole and be like WHAT THE HELL. DO YOU THINK THIS IS SOME SORT OF PLEASURE TRIP FOR ME?  I AM IN PAIN HERE, LADY.  But I knew she would probably be coming back in the room momentarily to unclog my ears, so I was nice even when she moved my LV purse out of the way of the door WITH HER FOOT.  The only time I got a little not nice was when she was annoyed because I didn't remember the day of my last menstrual period.  She really pressed the issue and finally I said "Look, this is not about my vagina.  My ears hurt," and then I laughed to take away the sting but SERIOUSLY.  I am more than lady parts.  They never ask BEN when his last period was.  Erm.

Speaking of the 4th of July, it was awesome!  The whole weekend, really.  And like any good Wisconsin weekend, it started on Thursday.  Ben, Harry, and Jack went camping with a couple from my department, and the babies and I were on our own.

We met some friends at the purple dinosaur park, and Dorothy took off her Elsa dress because she was too hot. 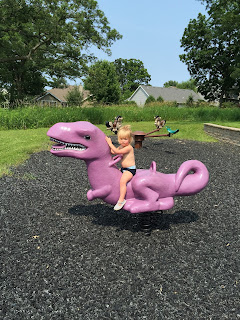 Before bedtime, Cooper requested Superman ice cream, his favorite flavor. And how could I resist?  Both babies are even cuter when they're covered in ice cream. 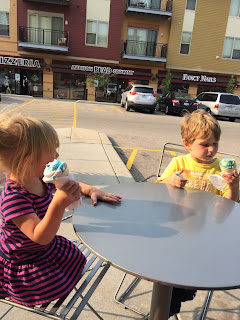 I put them to bed at like 7 and then zoned on the couch with Beatrix until almost midnight watching Roseanne on Netflix.  Great show.

Chocolate chip pancakes for breakfast, and this picture is a good metaphor for our alone time:  almost a disaster but ultimately delicious. 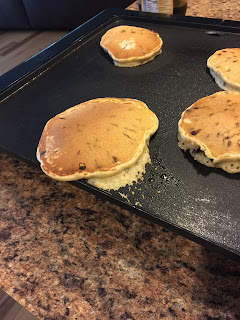 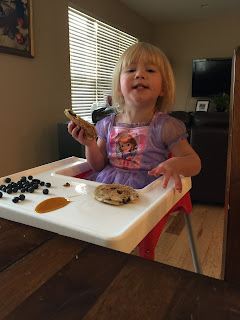 We trolled Super Target and bought tons of random shit then met the same friends for some splash park action.  And I remembered that splash parks never quite hold the kids' attention like I want them to. 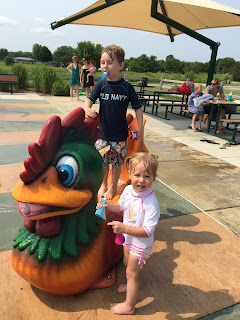 Ben and the boys came home just before nap time, and I went on an unsuccessful swimsuit shopping trip.  Lands Ends is just not doing it for me anymore.  In a good way.

Then Ben and I spent the rest of our night on the water slide. 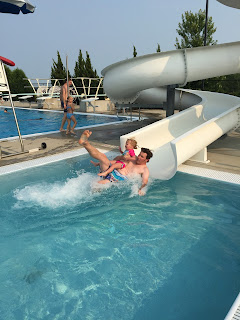 We started 4th of July with some pool time and MOAR waterslide.  And there was day drinking.  And naps. 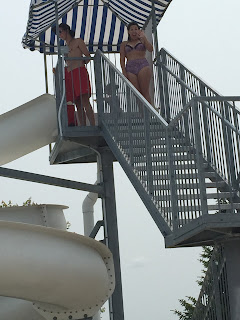 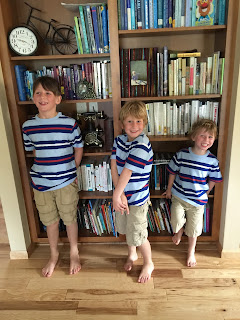 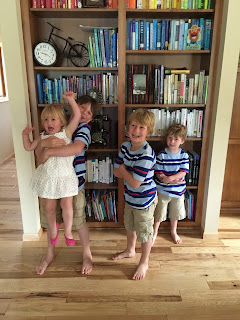 It's amazing that this tray made it in tact the whole half mile to the party. 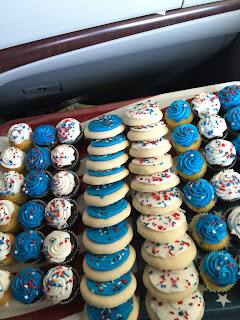 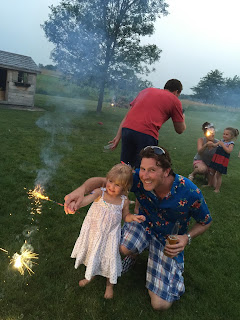 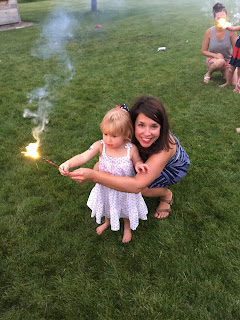 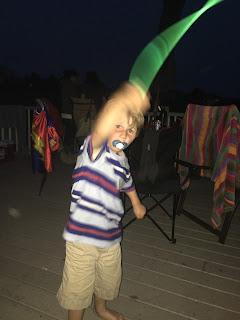 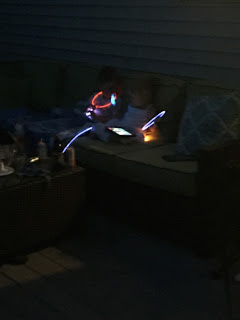 Ben and his friends got drunk and put on a huge fireworks show for us on the golf course.  It was a little bit scary because the fireworks were HUGE and RIGHT ABOVE OUR HEADS and being lit by our drunk husbands.

The kids enjoyed the kind of lord of the flies, parents are drunk, semi-unsupervised, manic playtime I remember from my own childhood when we'd go to parties with other families. 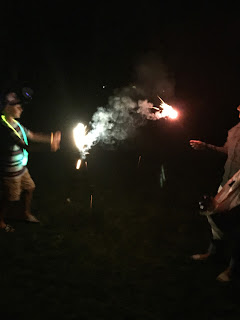 And the next morning, I was obviously too hungover to properly get on my damn float at Family Float Day at the pool. 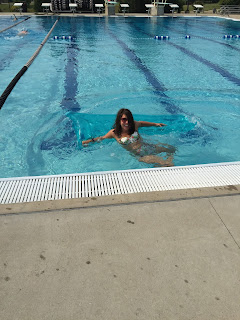 We all brought our kids and some coffee and donuts and frolicked our hangovers away.  But then we went home at noon (when Float Day officially ends) for lunch and naps and everyone else rallied with some margaritas and stayed at the pool, til 3.  We just can't hang, man. 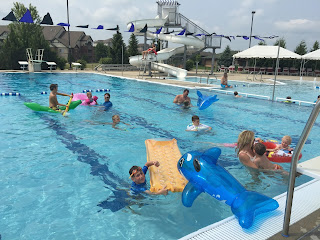 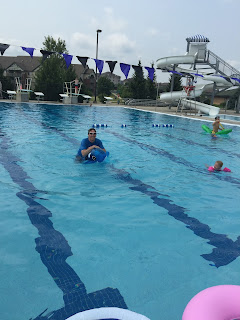 Hope you had a similarly indulgent weekend.  'Merica.