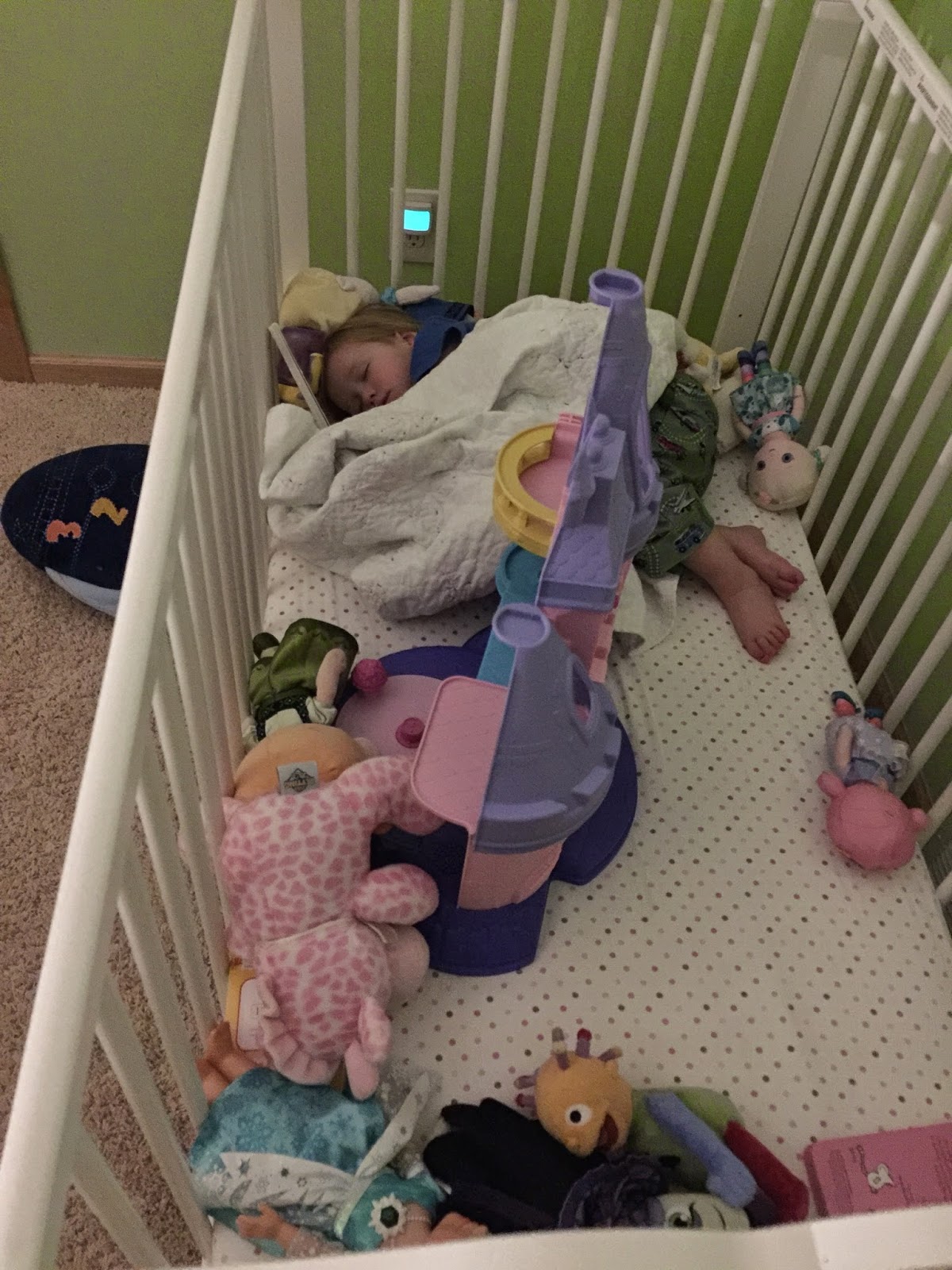 Dorothy has been trying to sleep with her Little People castle every night, and it;s cracking me UP.

I am SO HAPPY that we took a quick trip for spring break because these days have unfolded EXACTLY as I feared they would.  Just me and the kids hanging out all day while Ben works.  Argh. I wish I was a better stay-at-home mom.  I mean, I am good at it and the kids have fun, but I wish I had more fun.  I think if I didn't have other things to do-- teaching during the semester and my moonlighting online teaching during breaks, I would be less stressed.

And I mean, I do like it.  During the week when the boys are at school and I have my at-home days with Dorothy and Cooper, things are lovely, and I often nap.   It's hard to complain about a day with a nap.

And the big boys themselves are so! much! fun!  Harry is reading Farmer Boy which he bought at the Wall Drug bookstore, and he talks to me about it, and I LOVE it.  That book!  I read some of it aloud in the car and the food descriptions were just as delicious as I remembered them to be.  And Jack and I are reading Little House in the Big Woods, which Harry was never interested in.  It is simply written enough that Jack can read some of it, and I absolutely adore reading it aloud-- one of my favorites ever.  Last night, Harry and Jack and I went to see Cinderella.  It was WONDERFUL, and they are so fun at the movies.

My point is, though, that being home with all 4 of them is kind of tough.  The big boys mess up the tranquil routine that the babies and I have fallen into, and I feel like I am constantly cleaning something up.  Today, I had a simple, simple goal for the morning:  go to the library to return my almost late books and pick up my holds and swing by Toys R Us to let the kids spend their Easter money from Ben's parents.

We got up around 7:30. The boys walked the dog, and I made eggs and fruit salads.  I did some laundry, cleaned up breakfast, nagged the boys to get dressed, worked out, took a shower, dressed the babies, cleaned up the wreckage of the babies' rooms, and then tried to heard everyone out the door. And it was 11:15!  IT TOOK US 4 HOURS TO LEAVE THE DAMN HOUSE.  This doesn't happen when it's just me and the babies.

Cooper, though, is never happier than when his big brothers are home.  Today he came into the kitchen to tell me that he thinks Jack doesn't like to play in his room because it's blue and could we please paint it pink because that's Jack's favorite color.  I didn't tell him that Jack hates his room because Cooper is a little despot, short and stout. 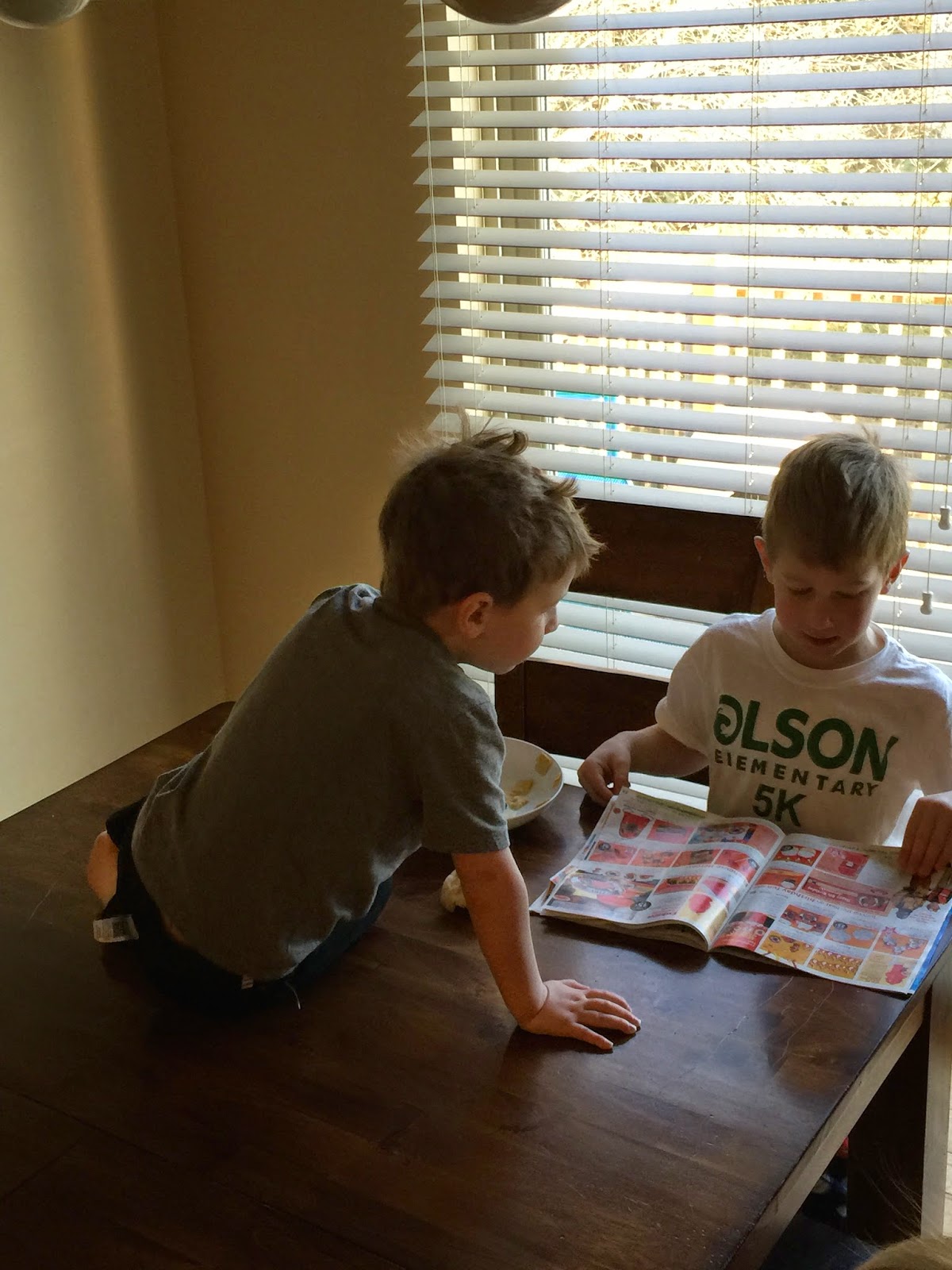 Also!  To make break even more fun, I decided to introduce Dorothy to the potty.  I would call it potty training, but she has not peed on the potty once in three days, so I think it's potty learning.  We switched to cloth training pants (when we go out, I put a pull-up over the cotton pants), and we are just changing her eleventy billion times a day. She is very cheerful about the whole thing and will always try to go potty.  She has been in disposable diapers her whole life and generally not changed too often unless she's poopy, so I really think she just has to get used to the feel of being wet and dirty.  It's a slow process. 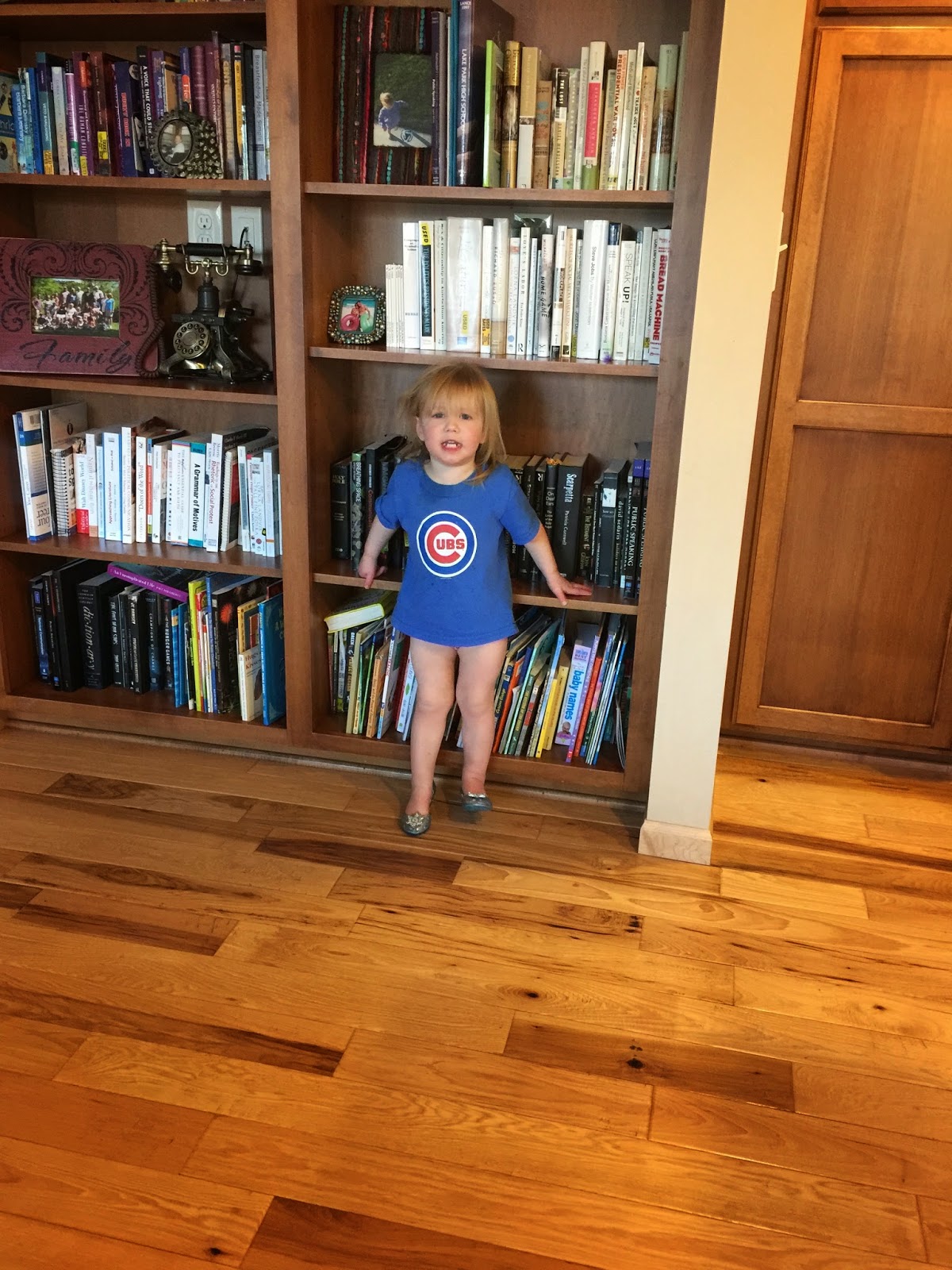 The kids were not messing around about about April Fool's Day.  They waited downstairs with weapons for a long time while I cleaned up the kitchen after breakfast and then ambushed me. 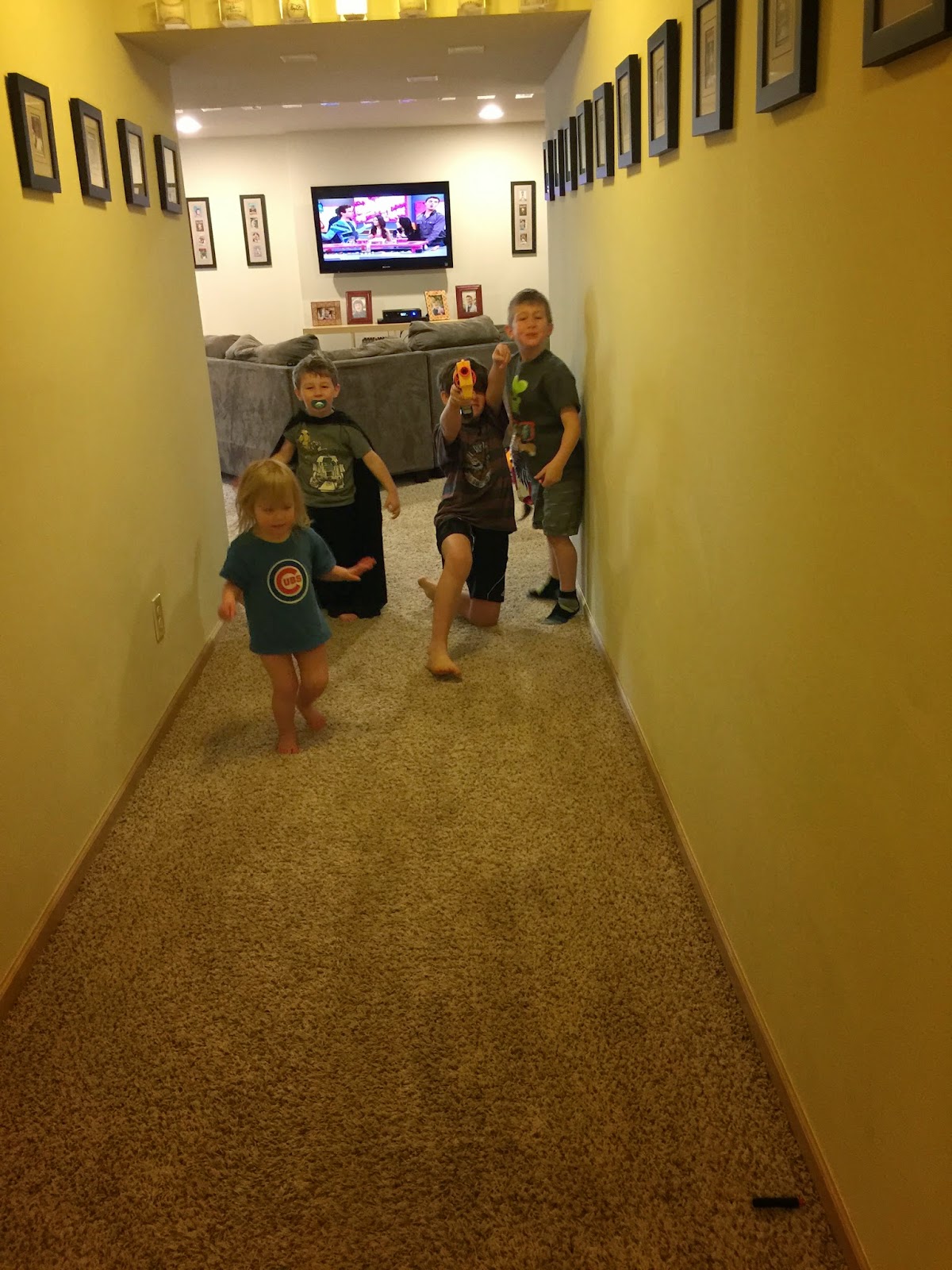 They even drew up plans. 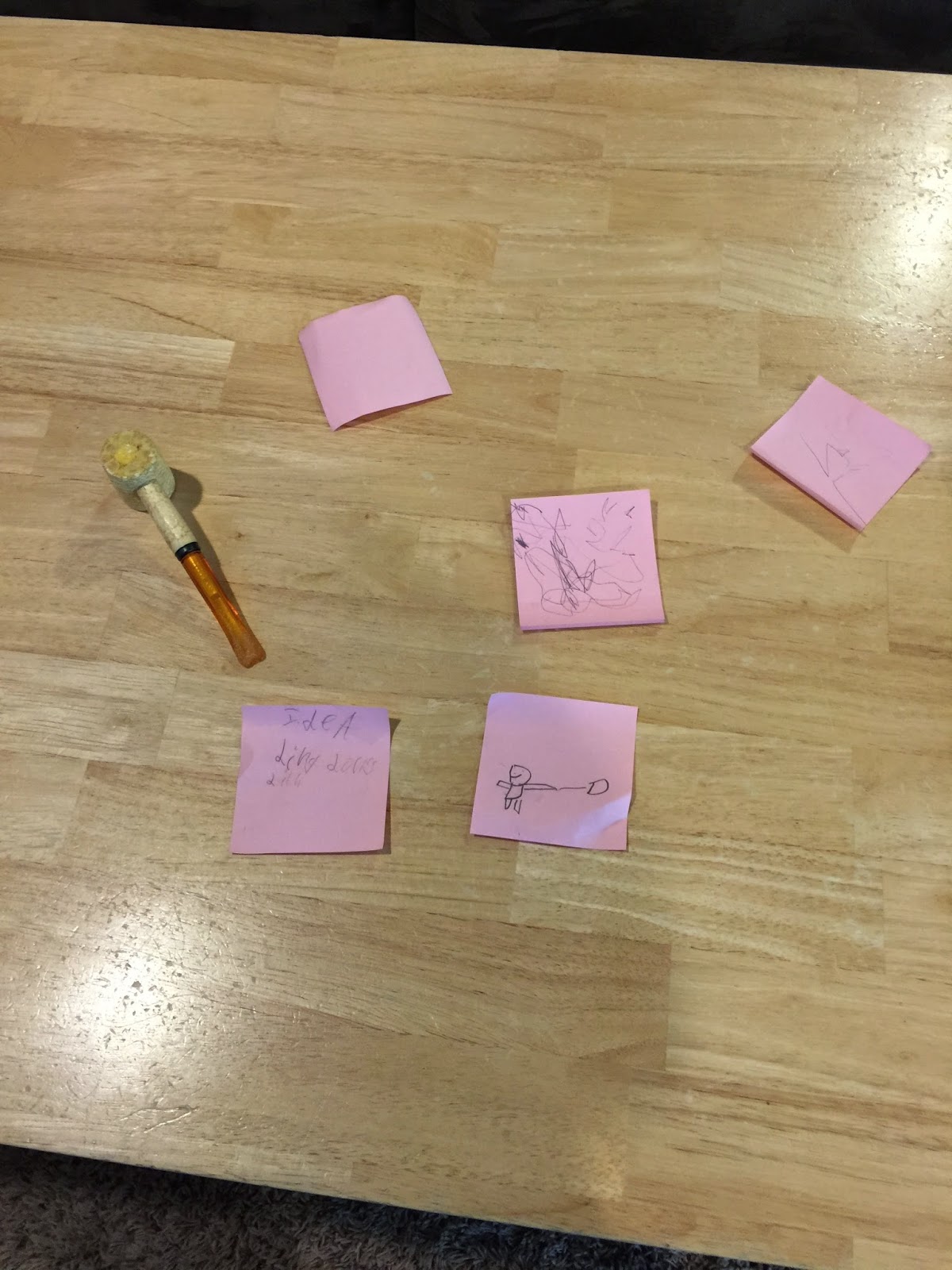 We went to the zoo immediately after nap on Wednesday, as did everyone else in town. 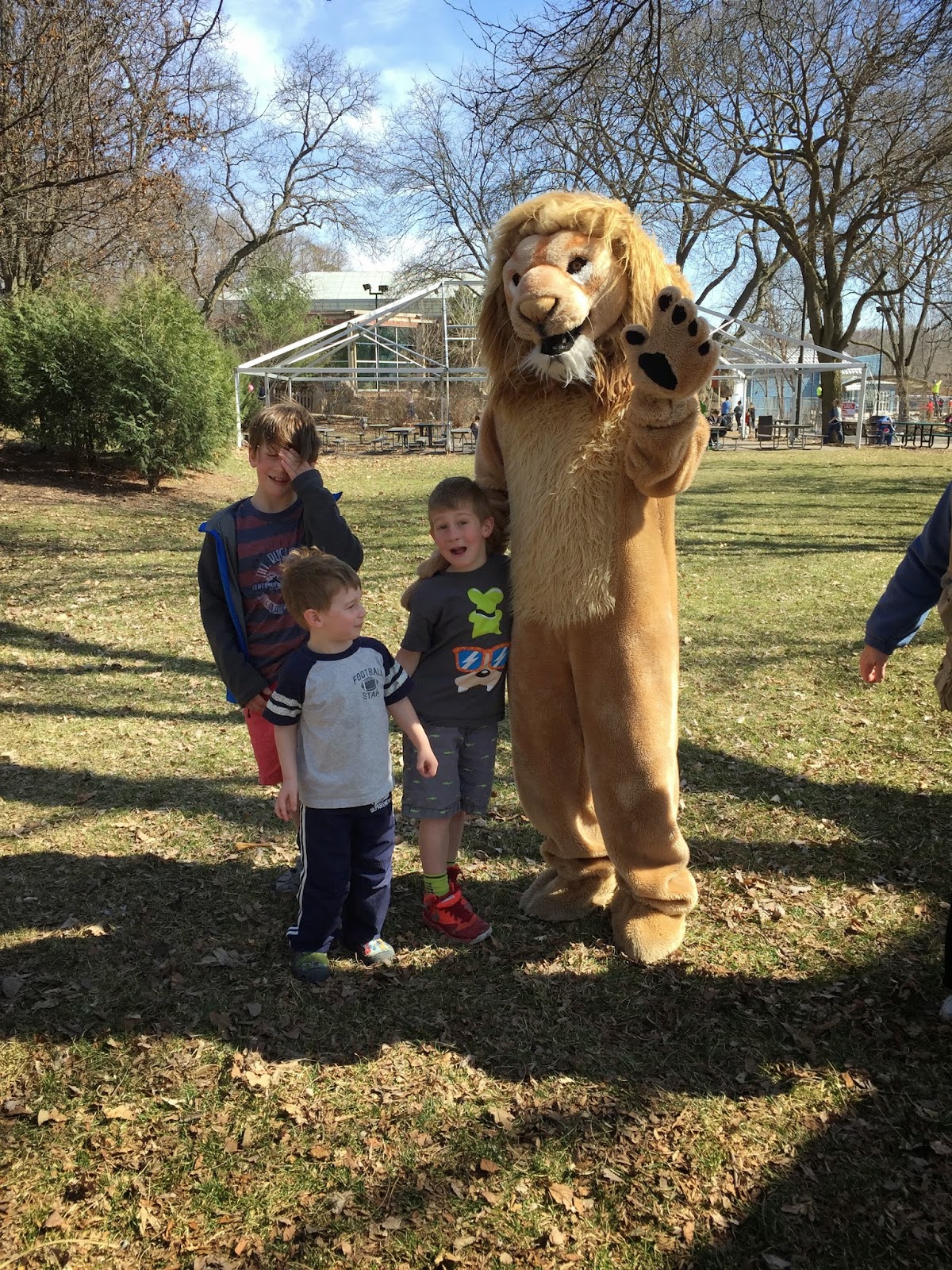 I thought we waited FOREVER for the carousel, but the big kids reminded me that it wasn't even close to a Disney line. 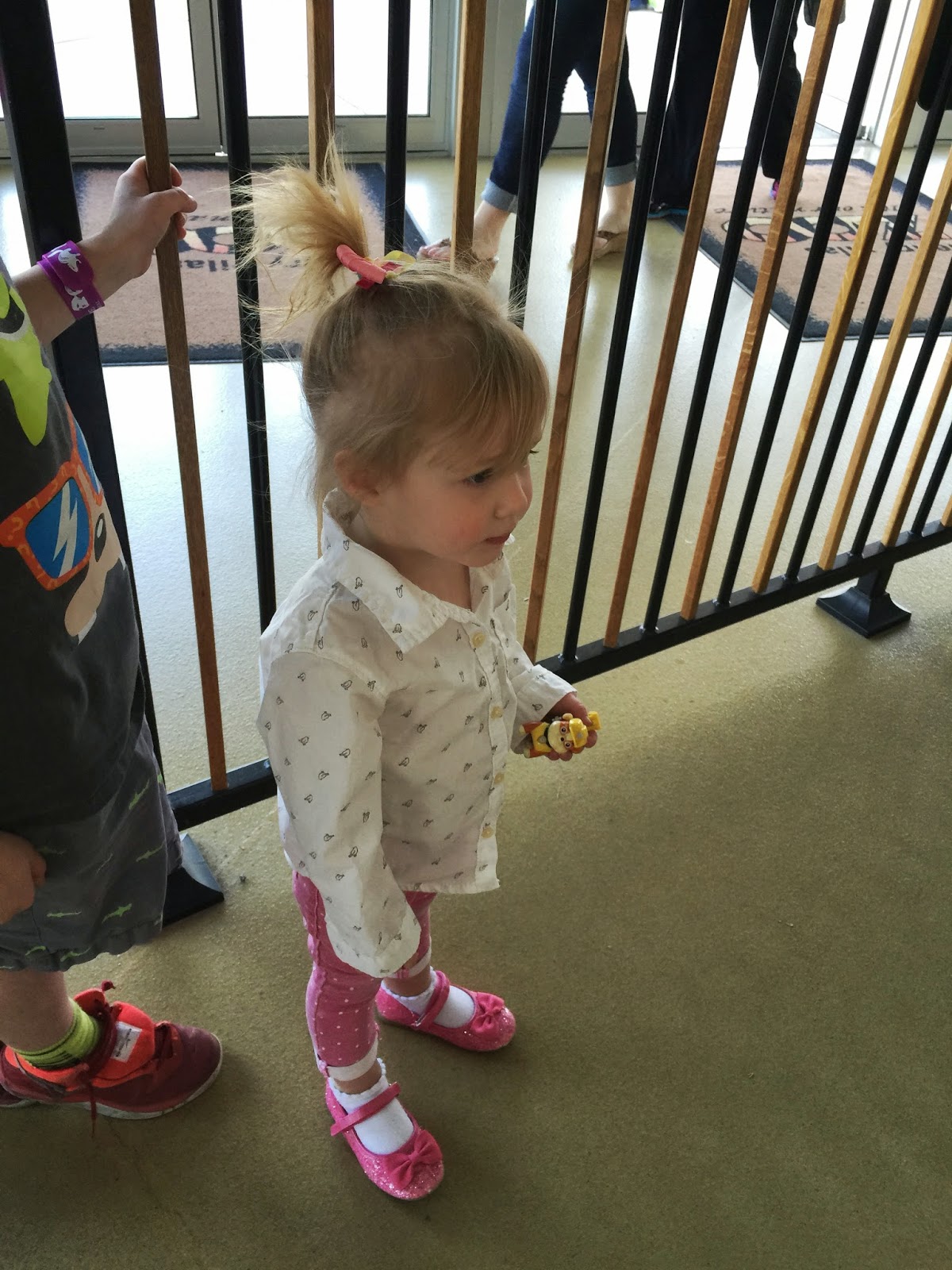 I was going to say it wasn't close to the payoff of a Disney line, either, but then I realized they were excited about the ride and the animals they were going to pick.  Because they are sweet little BABIES. 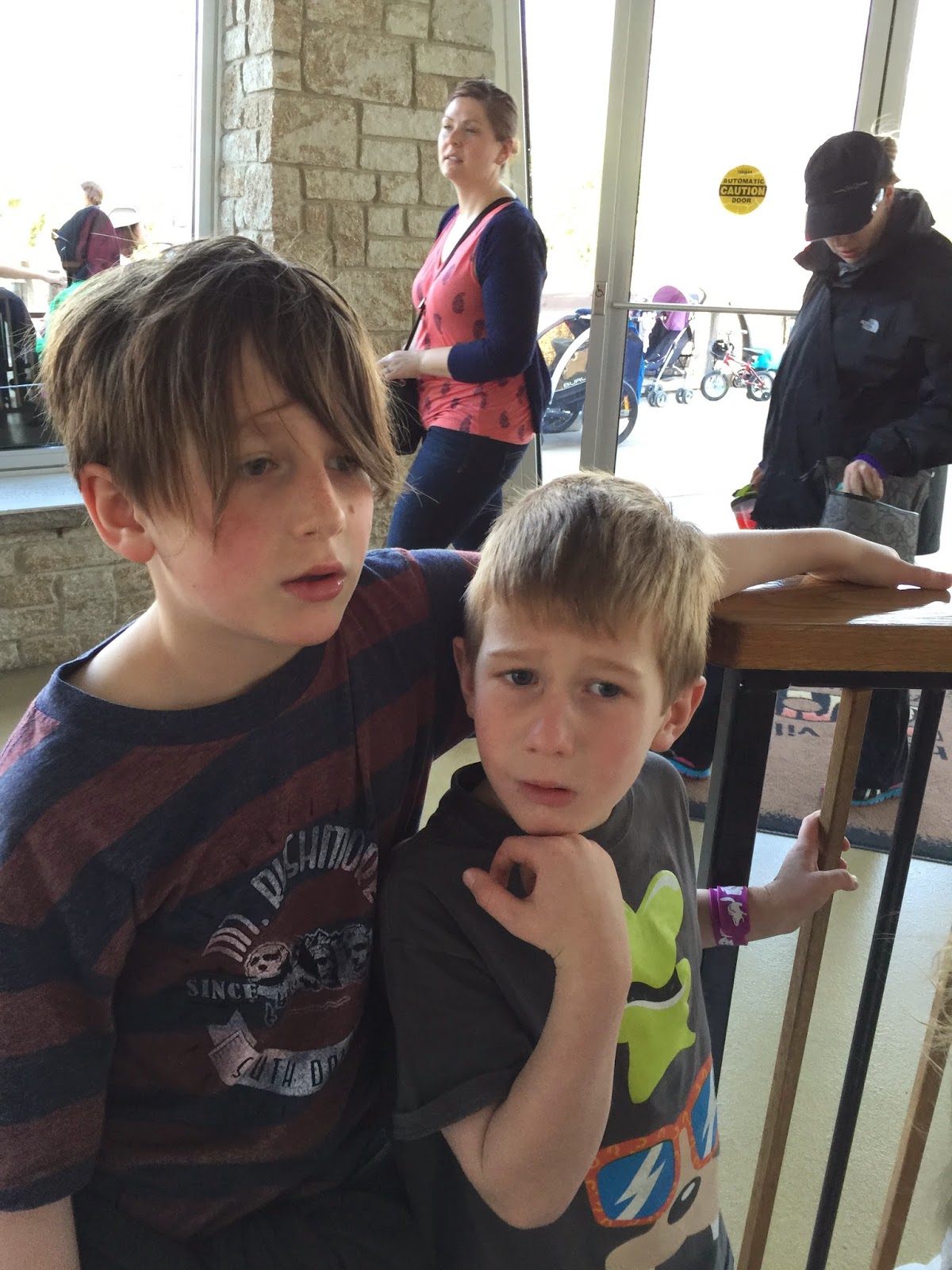 We also rode the train.  Behind a 30-something woman with zero teeth who was a gramma. 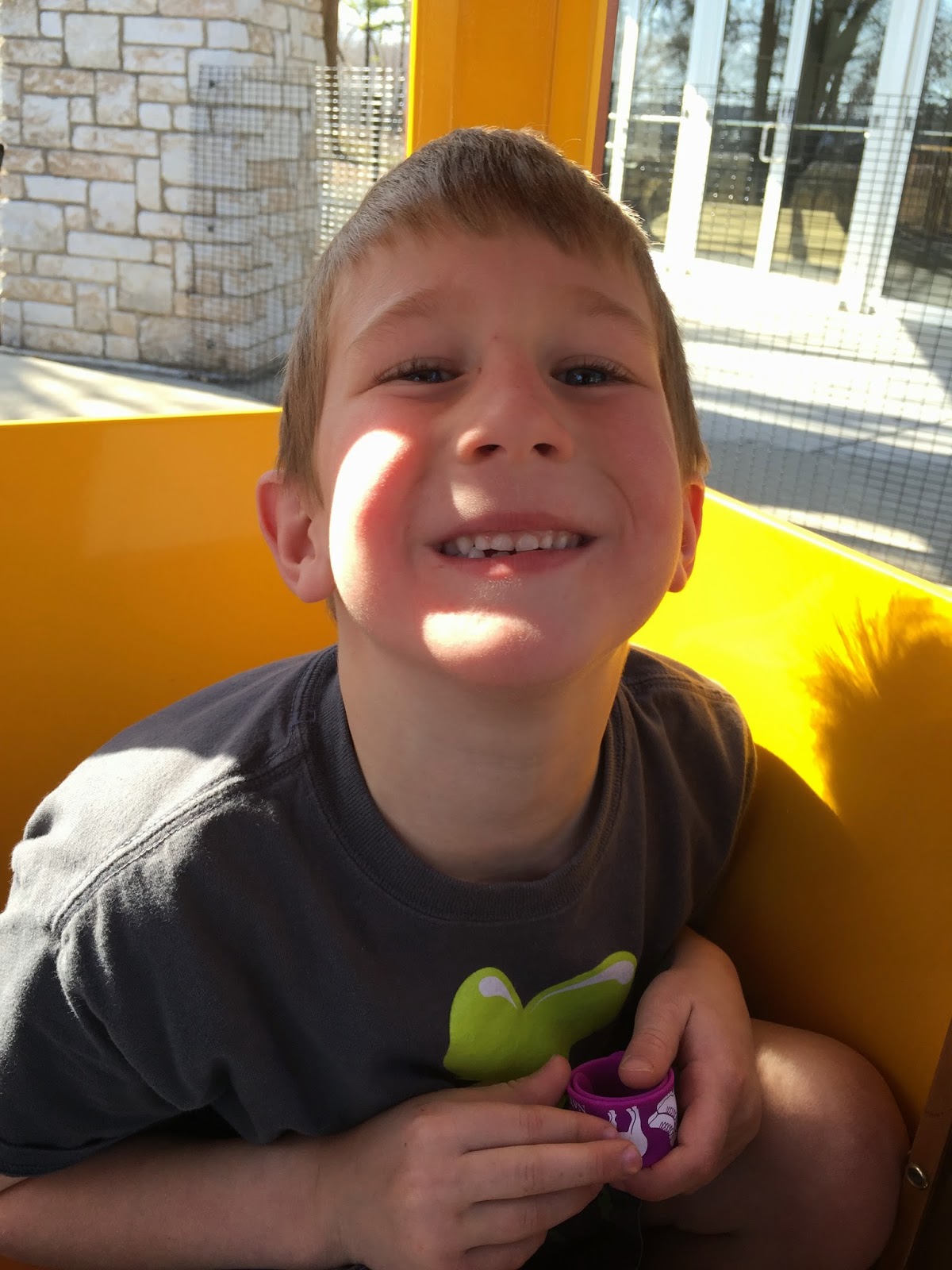 And we sort of enjoyed the zoo park except there were a million spring break daycare camps full of rowdy older kids, which, of course, made me thankful I AM a SAHM whenever I need to be. 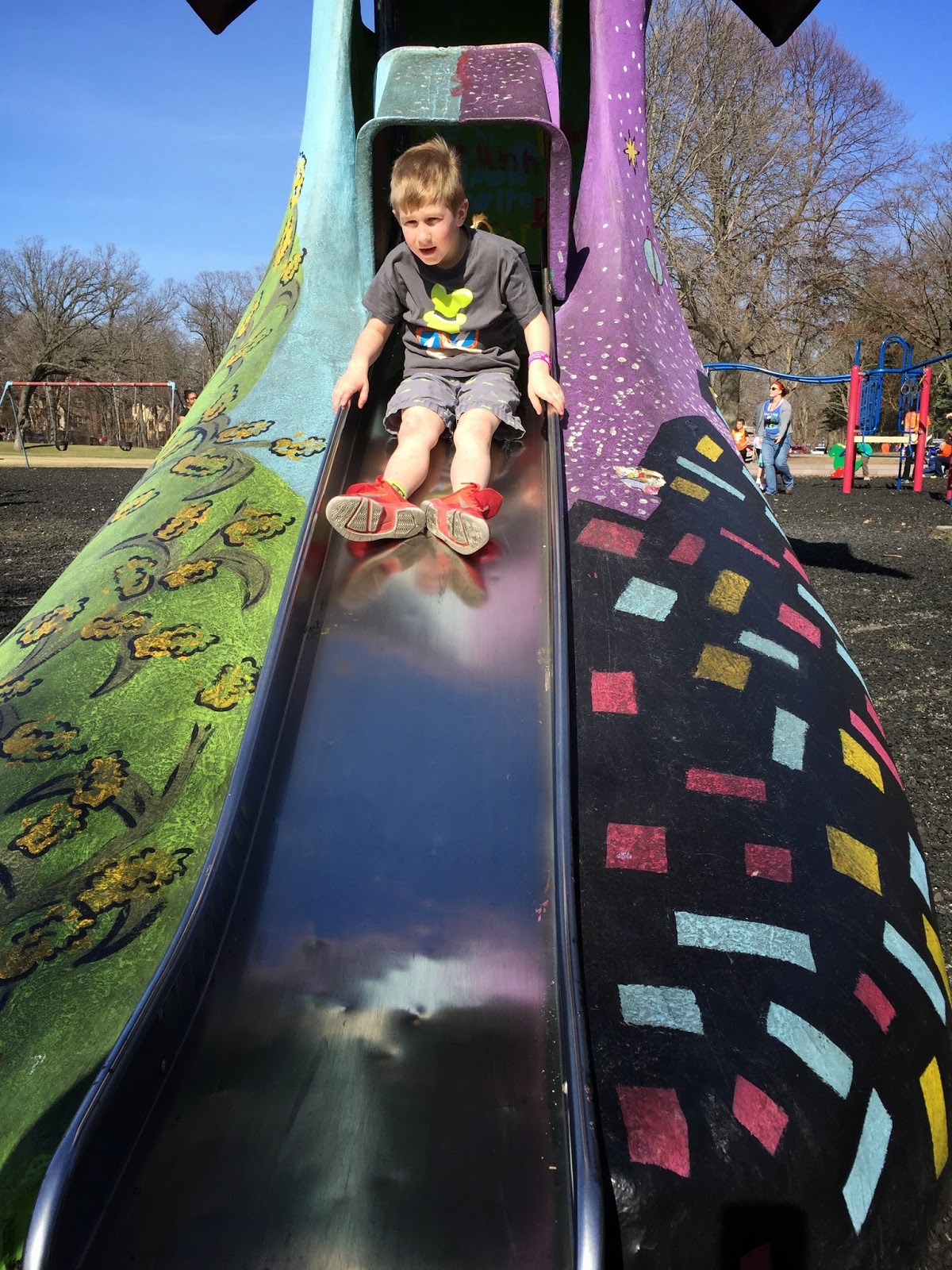 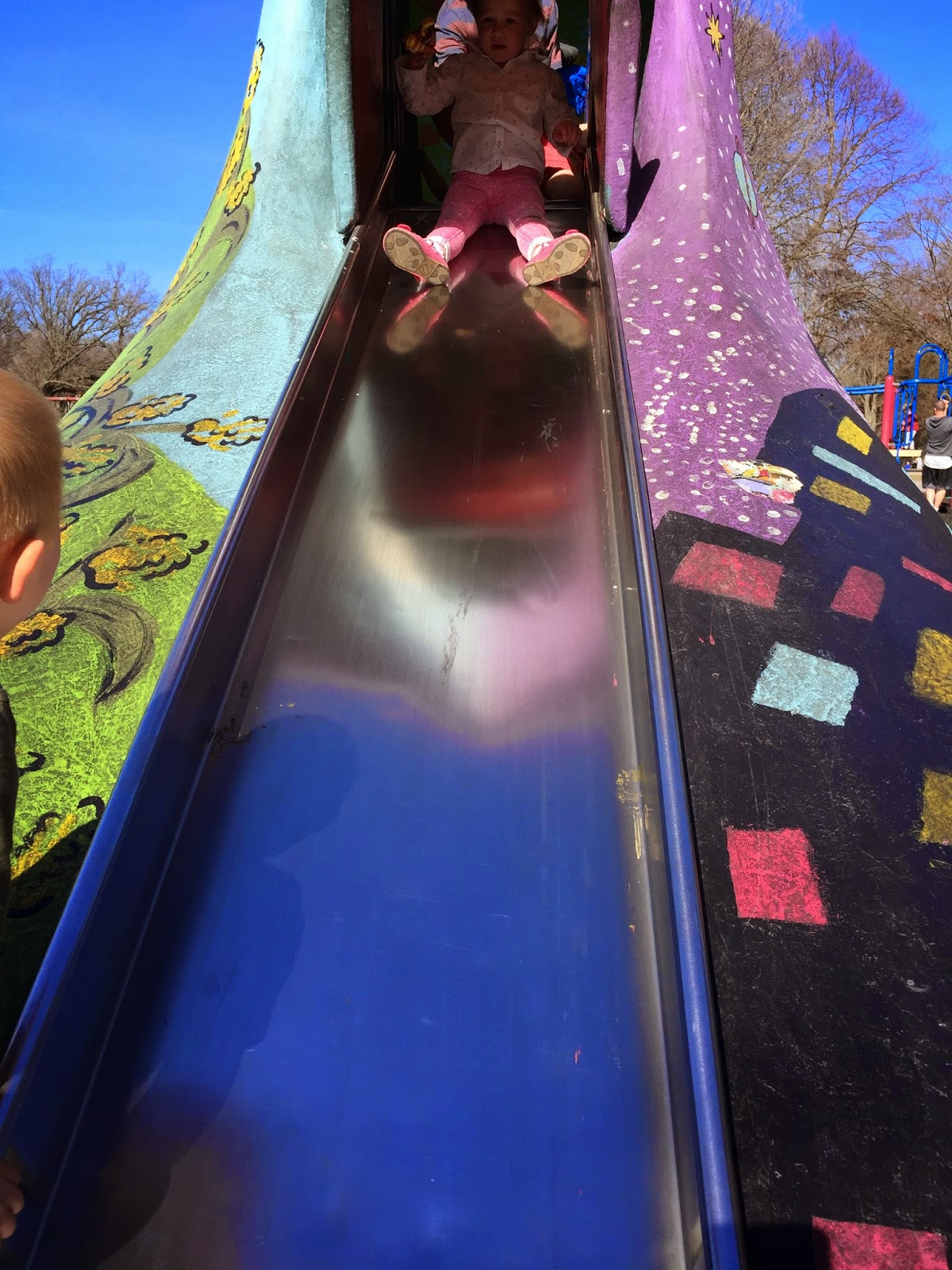 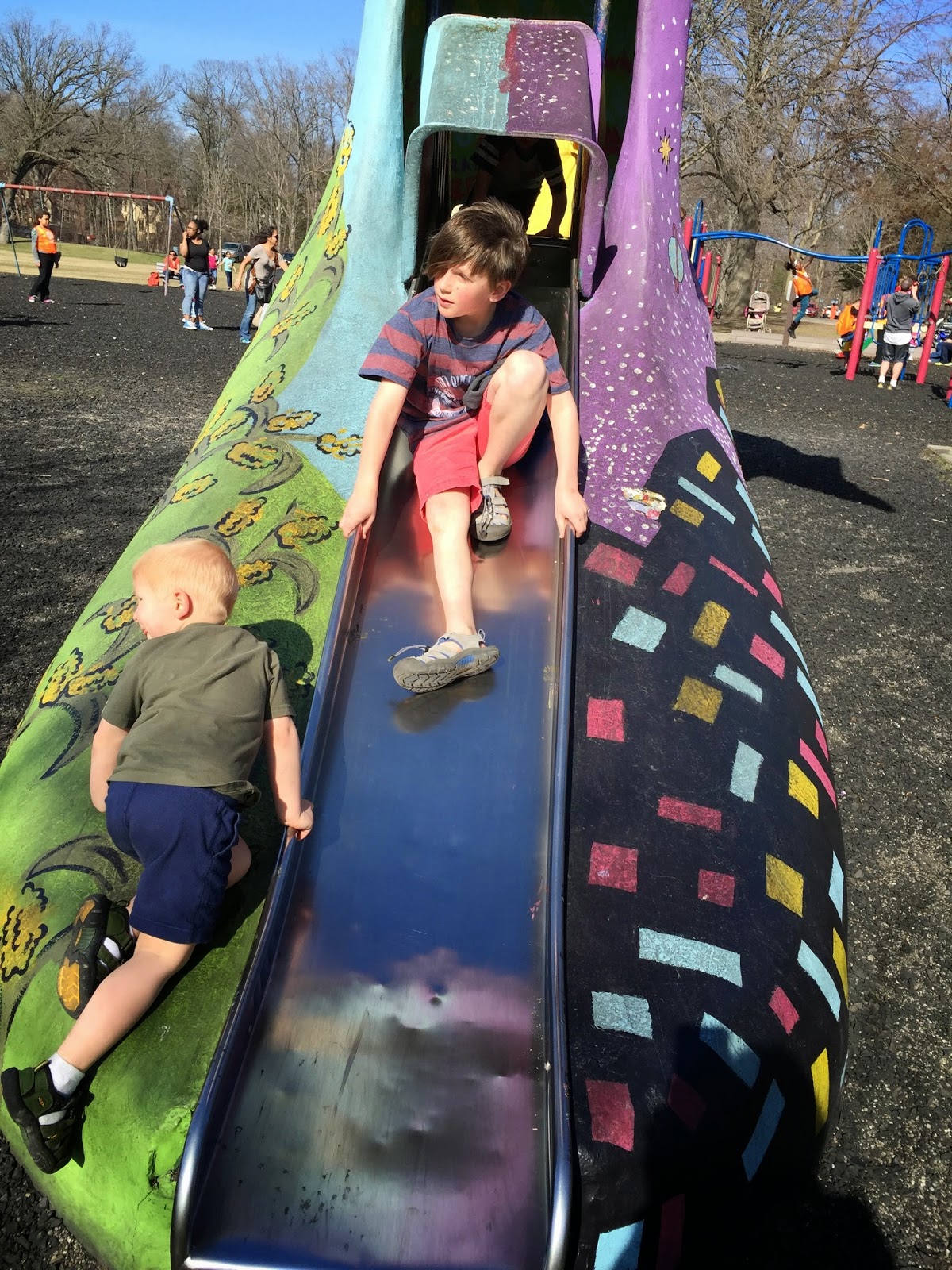 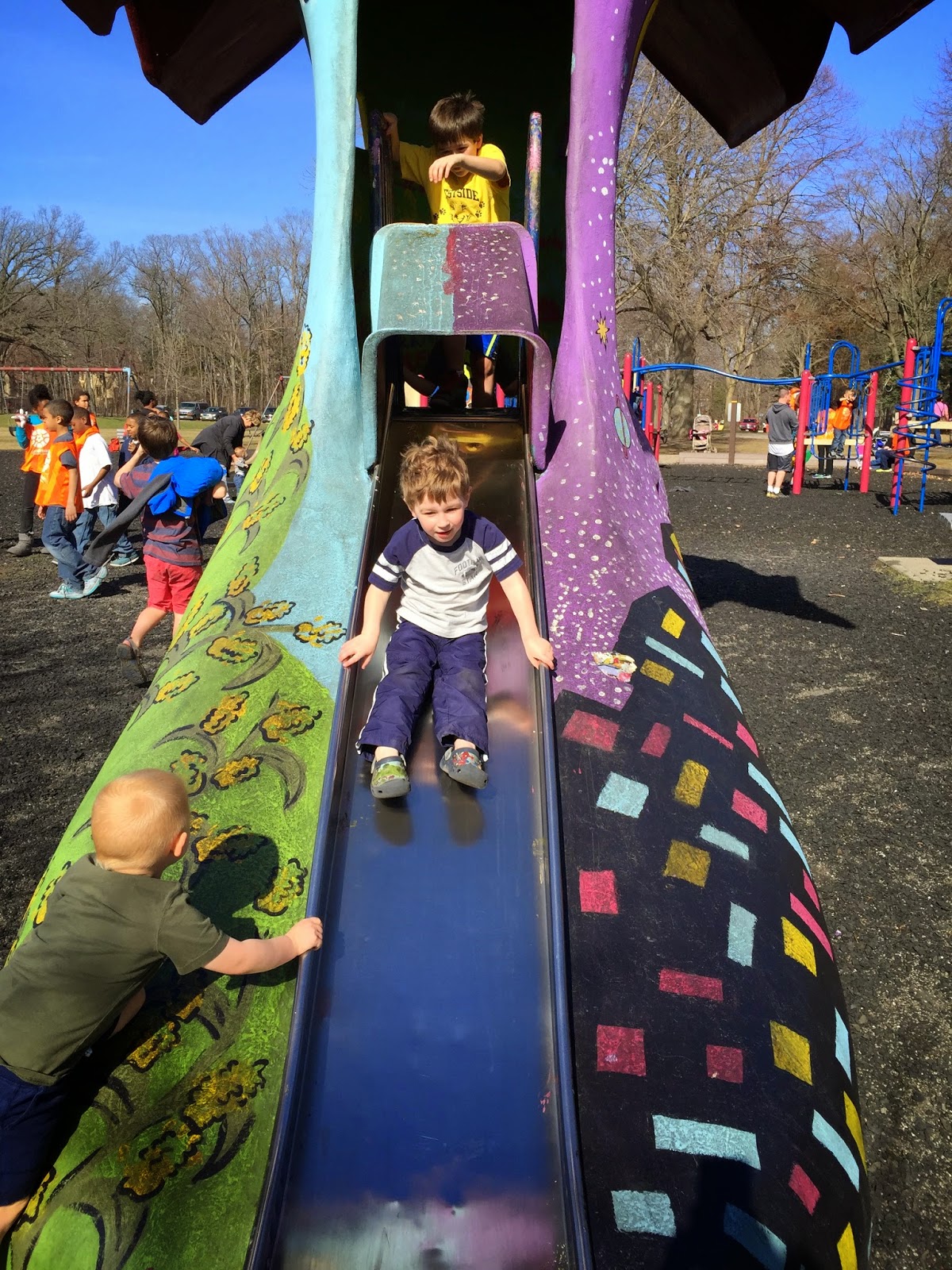 Today at the library and the toy store, the children were ANGELS.  I sang the Daniel Tiger "It's Almost Time to Stop" song, and they joined in, chose one more activity, and then followed me to the check out line after cleaning up their toys.  SO WEIRD. 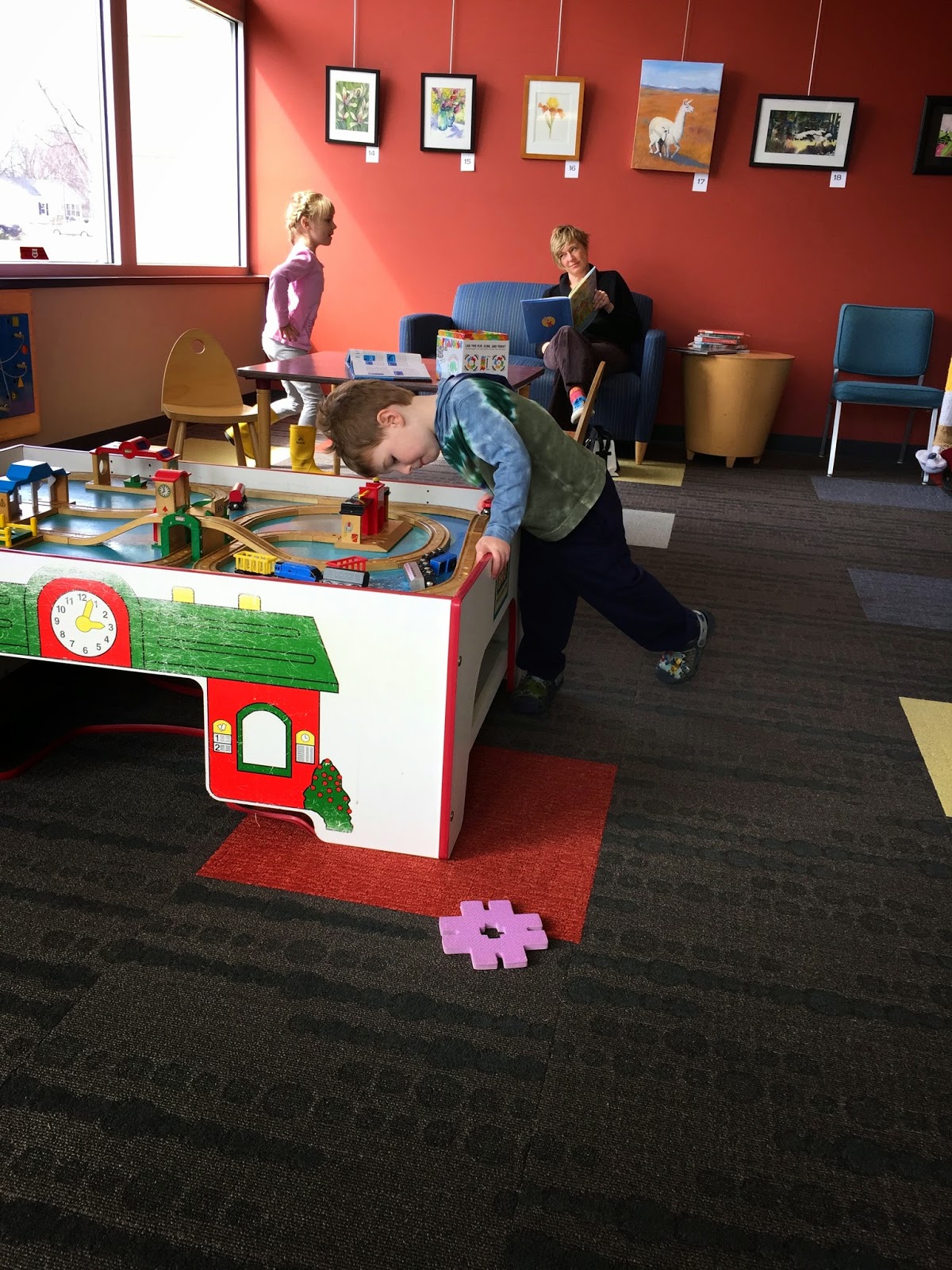 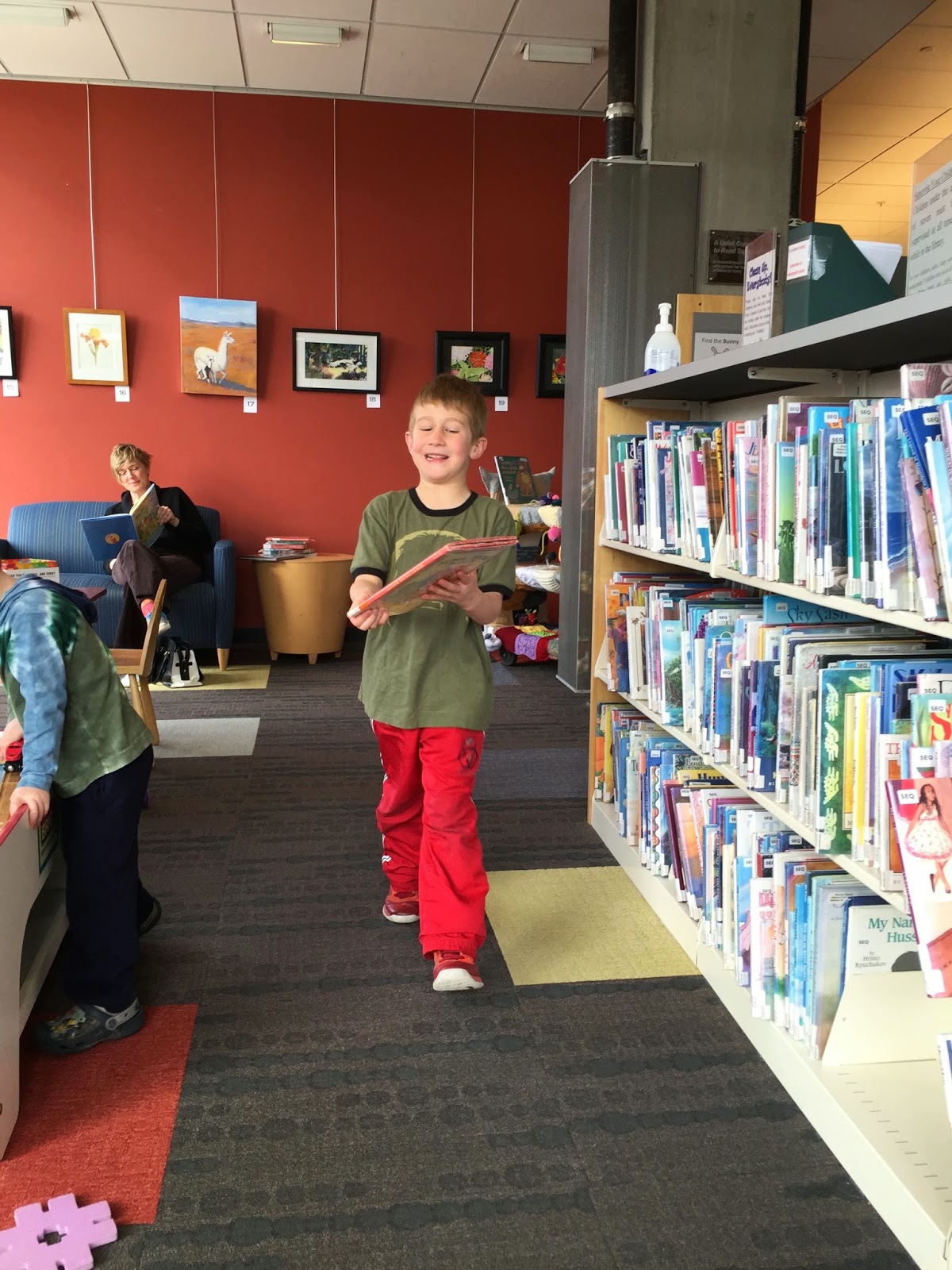 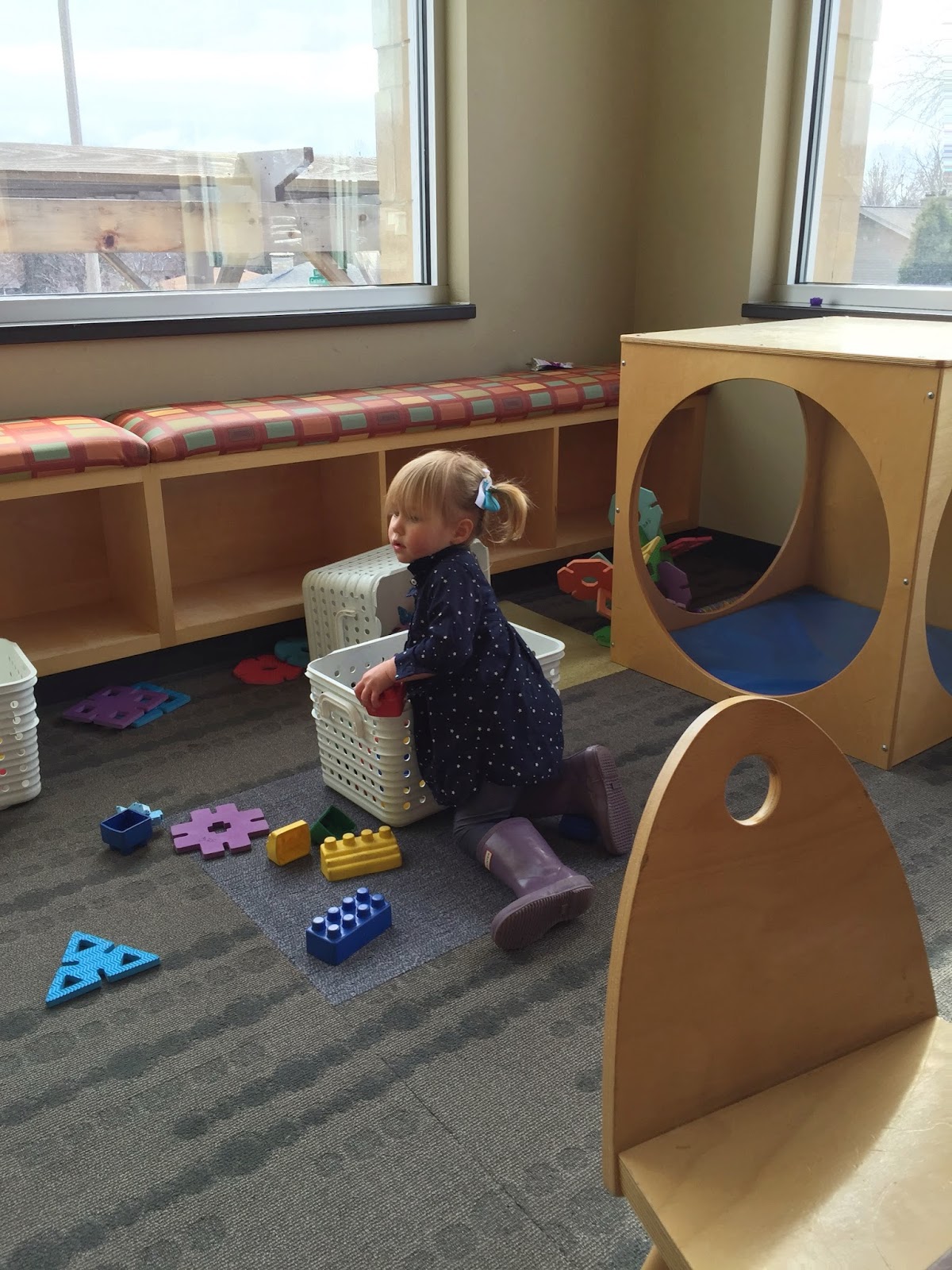 No fighting at TRU, and everyone carried their own crap, so no carts necessary.  AND they stayed within their Easter money budget and spent enough that Dorothy got a giant stuffed Olaf for free. 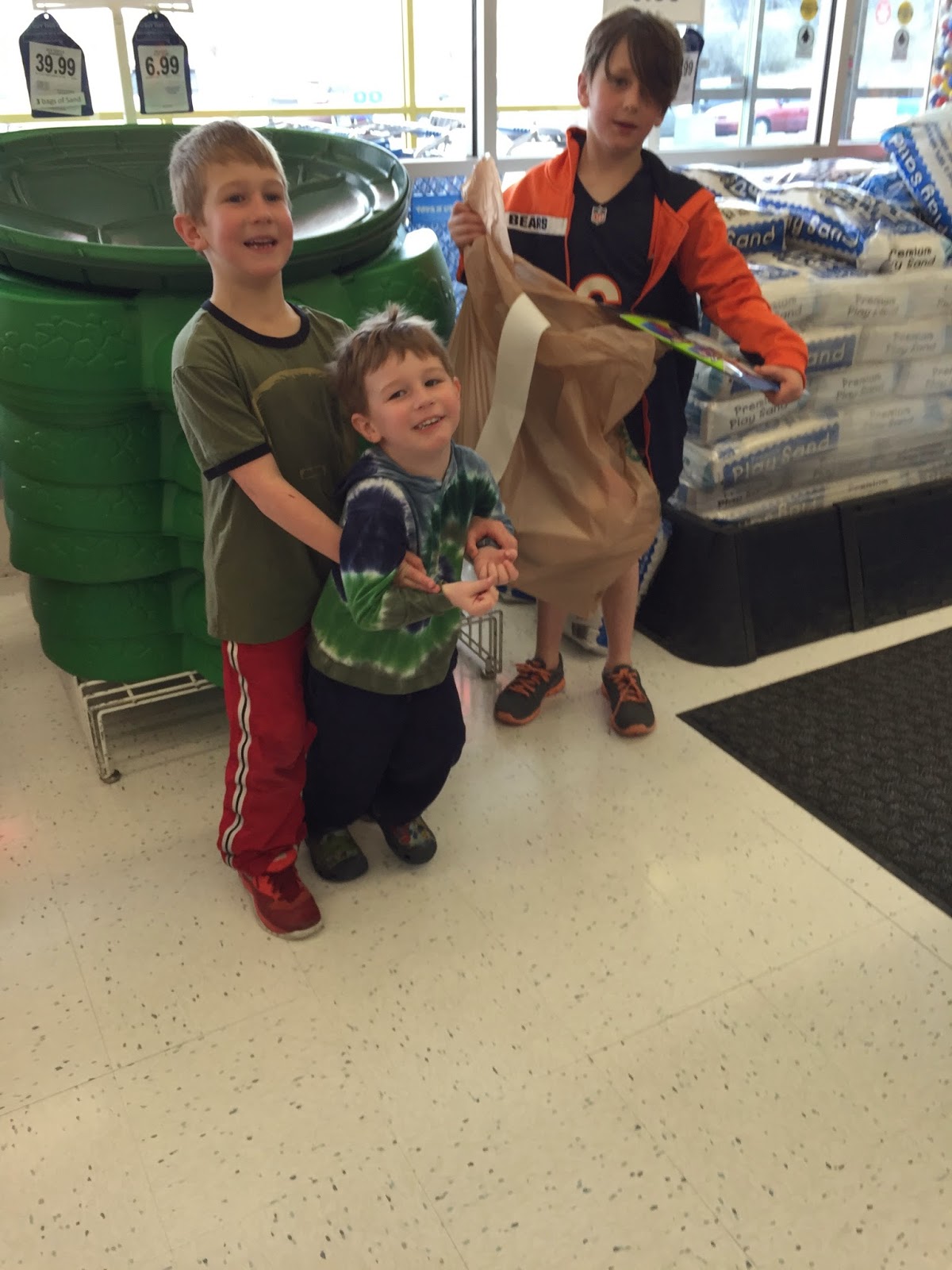 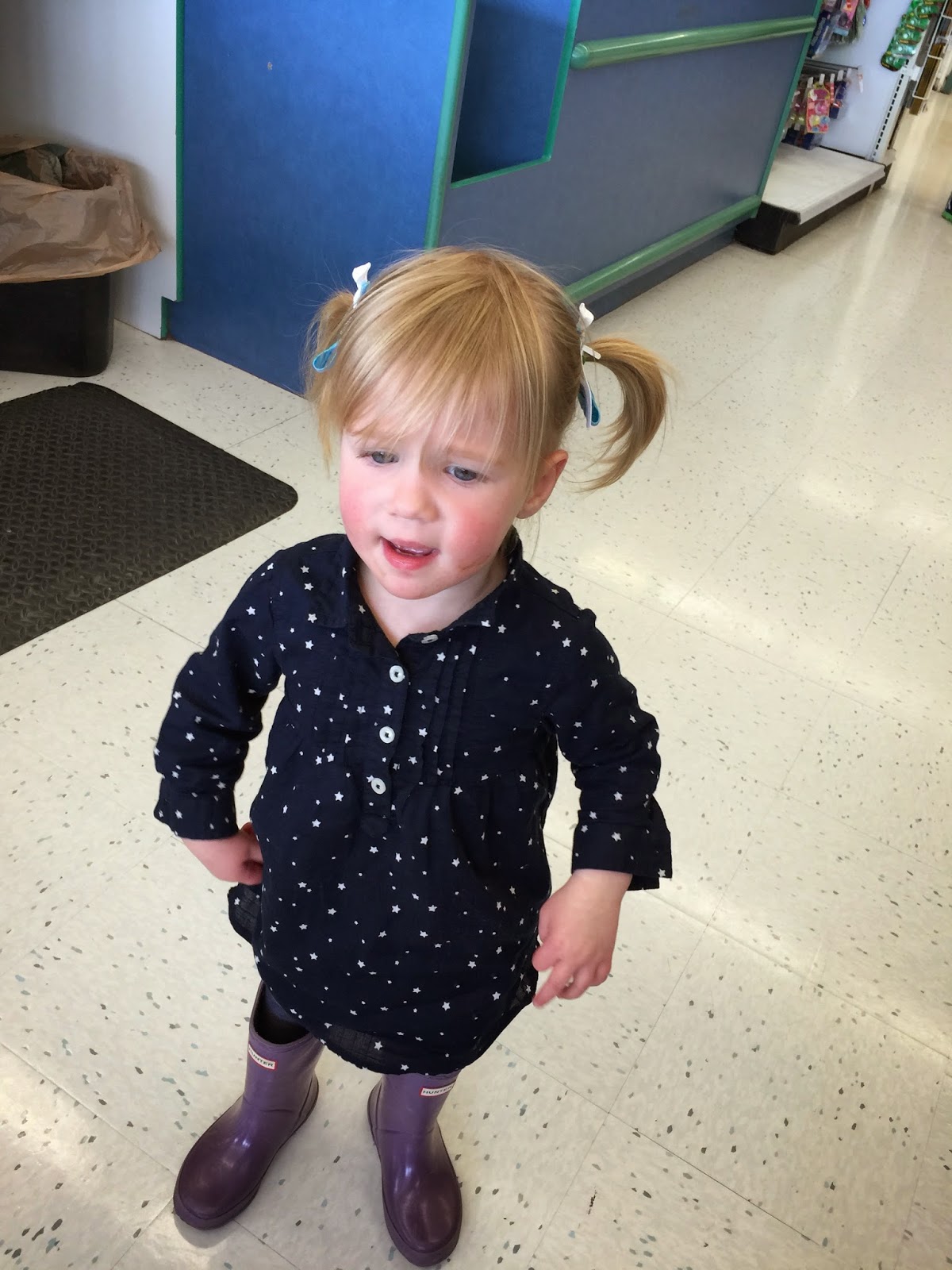 Even Beatrix had a lovely day. 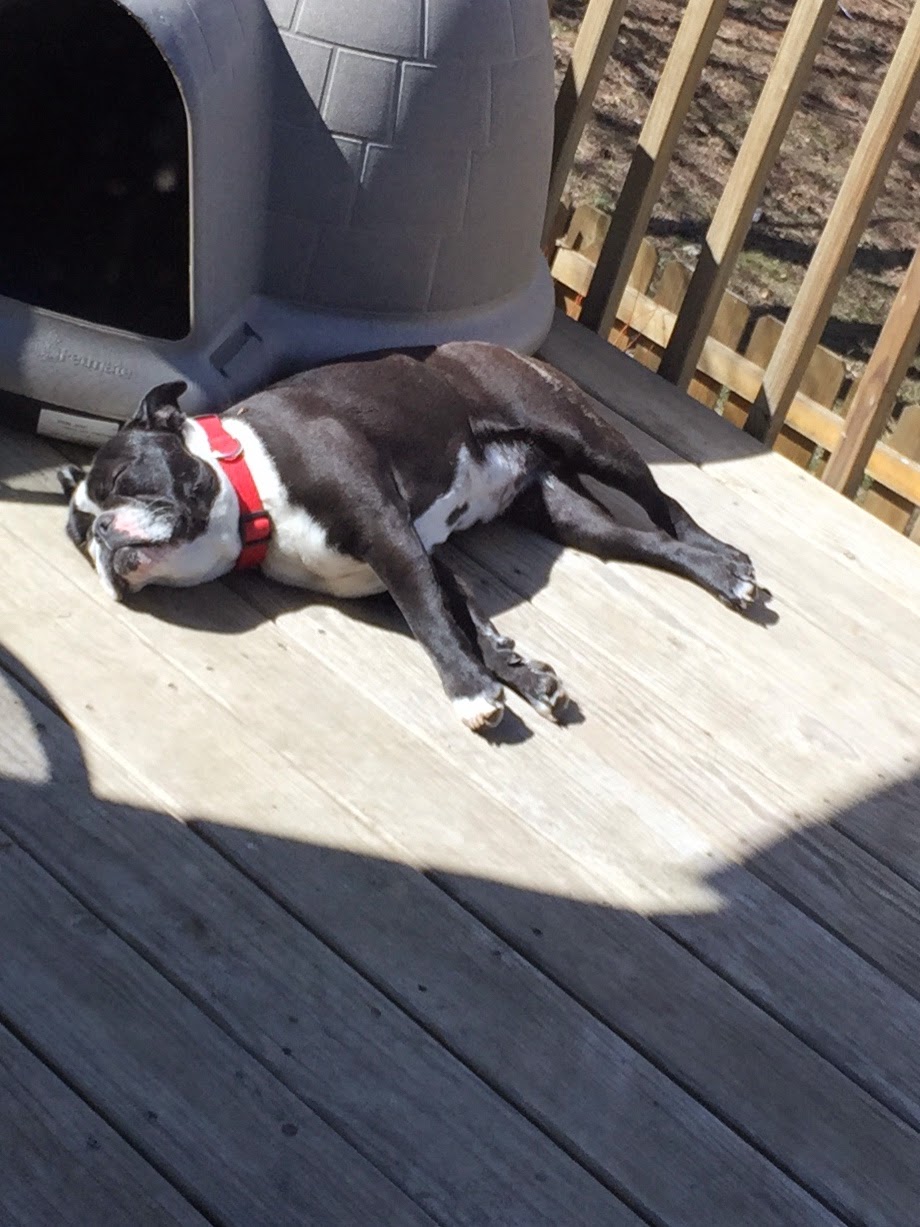 Dorothy took copious notes during the Mickey Mouse Club while I cleaned up dinner. 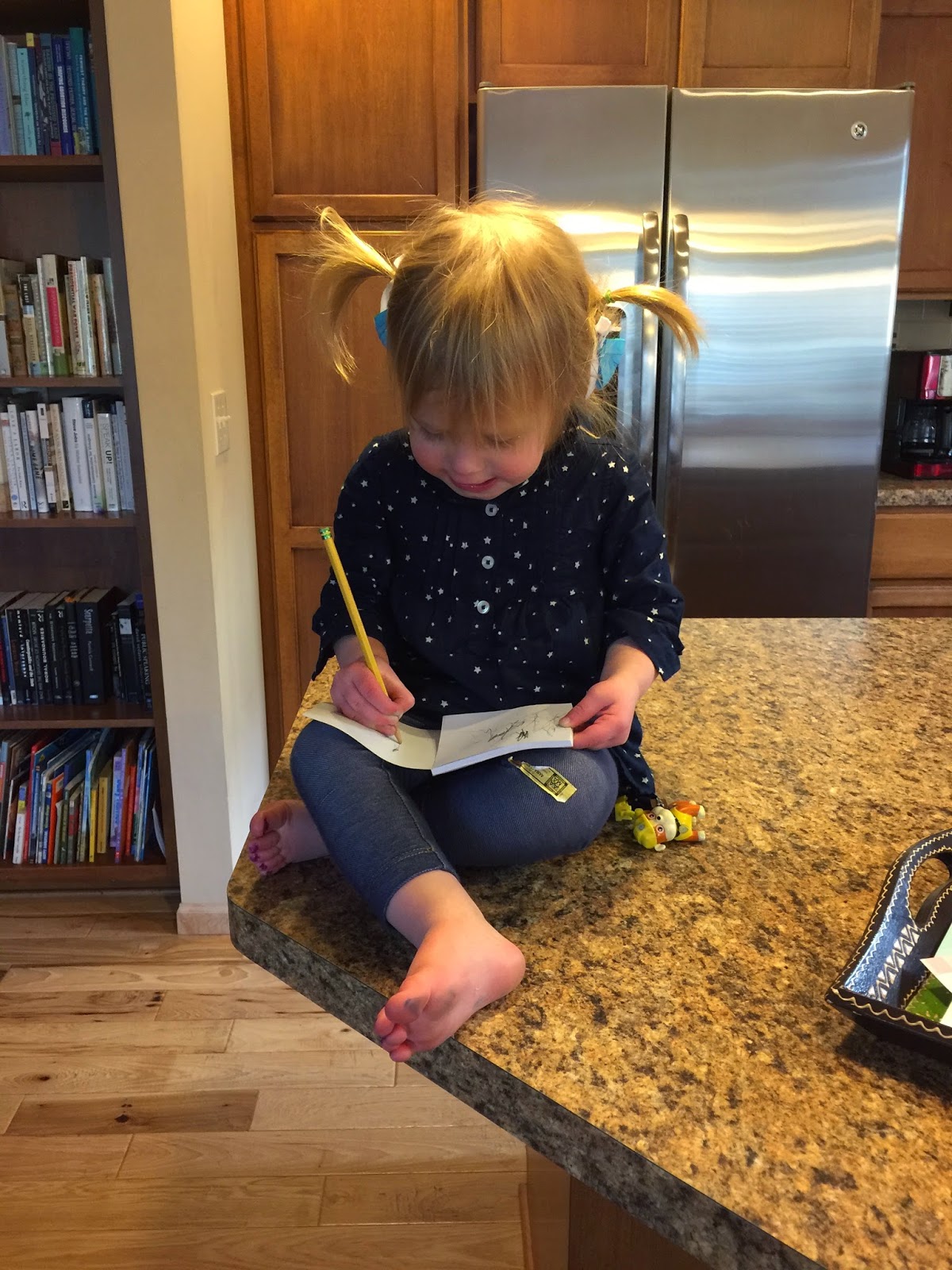 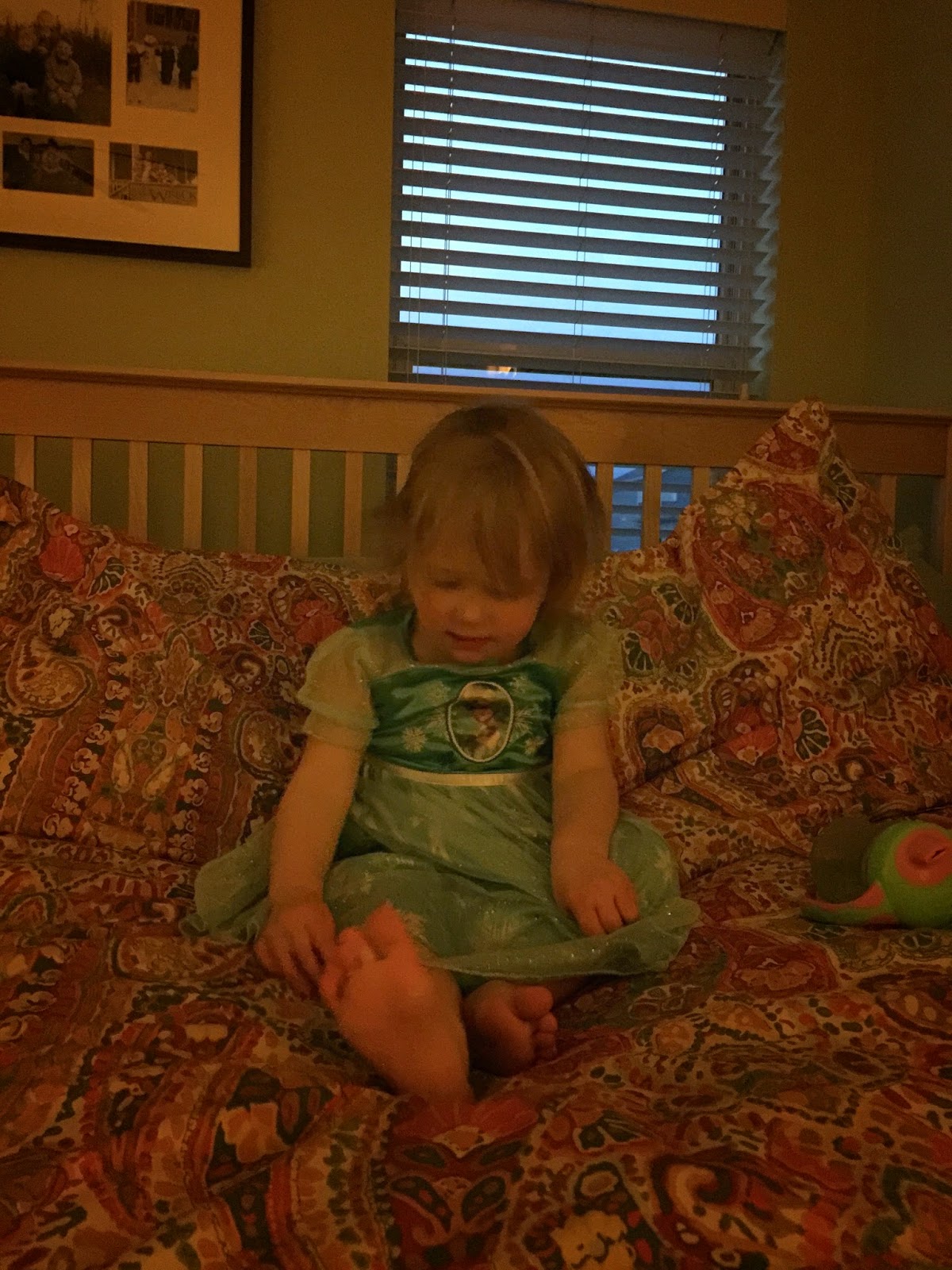 And I mean, it's not like my week has been tough.  Yesterday Ben came home at 4, and I had a 60-minute massage appointment and then took the boys to the movies.  Today, he was home by 3, and I went to the mall for a couple of hours by myself and tried on lots of stuff.  I love break.
Posted by Sarah at 9:11 PM