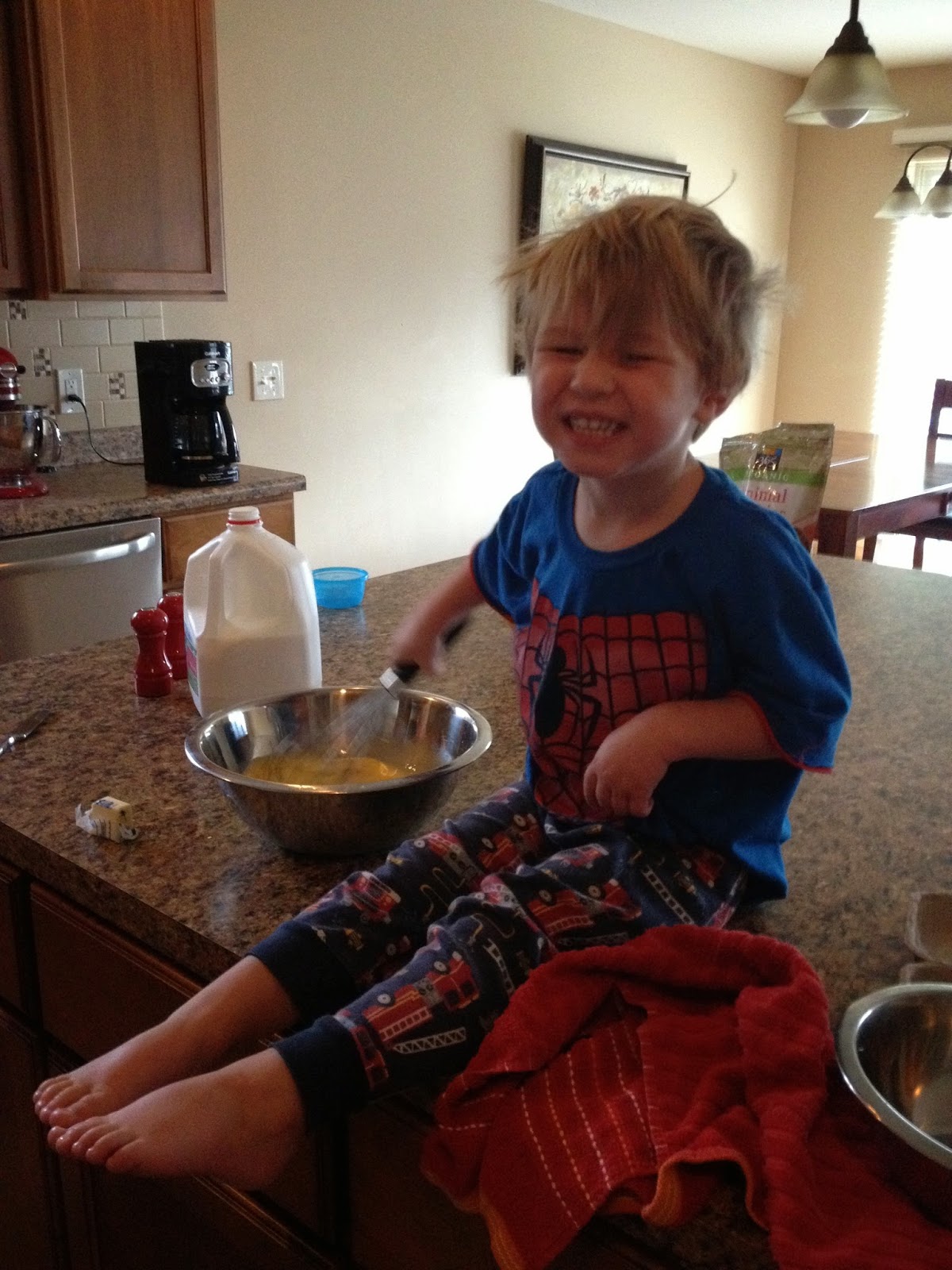 I woke up with a headache and told Ben I probably shouldn't drink tequila on a random weeknight.  He laughed and asked how weekdays are different than weekends, and I realized he was right. Nowhere to go.  Might trade pajamas for swimsuits.  Lovely.  But I feel the same pull of professional responsibility on Saturdays and Sundays-- the things that make teaching online awesome also make it stressful.

Slightly hungover, it was harder than usual to deal with Cooper's request of "Eggs.  I help.  Me high."

As you can see from the above picture, that means he wants to crack the eggs, pour in the milk, add salt and pepper, and whisk the whole damn thing up while sitting on the counter.  Which he did, of course, because I am a sucker for that baby man.

Yesterday Ben had to teach, and I asked Harry and Jack if they wanted to stay home from their summer enrichment gymnastics class because I didn't want to have to get dressed and go pick them up (SO LAZY) and because they do such a good job of entertaining the babies (again, SO LAZY). They looked at me like I was crazy because they are having so! much! fun! at gymnastics.  It's pretty cute.

Speaking of lazy, while Harry and Ben were at the doctor and Jack and Cooper were warring in the toy room, I dozed off on the basement couch and woke up with a start realizing I had no idea where Dorothy was. 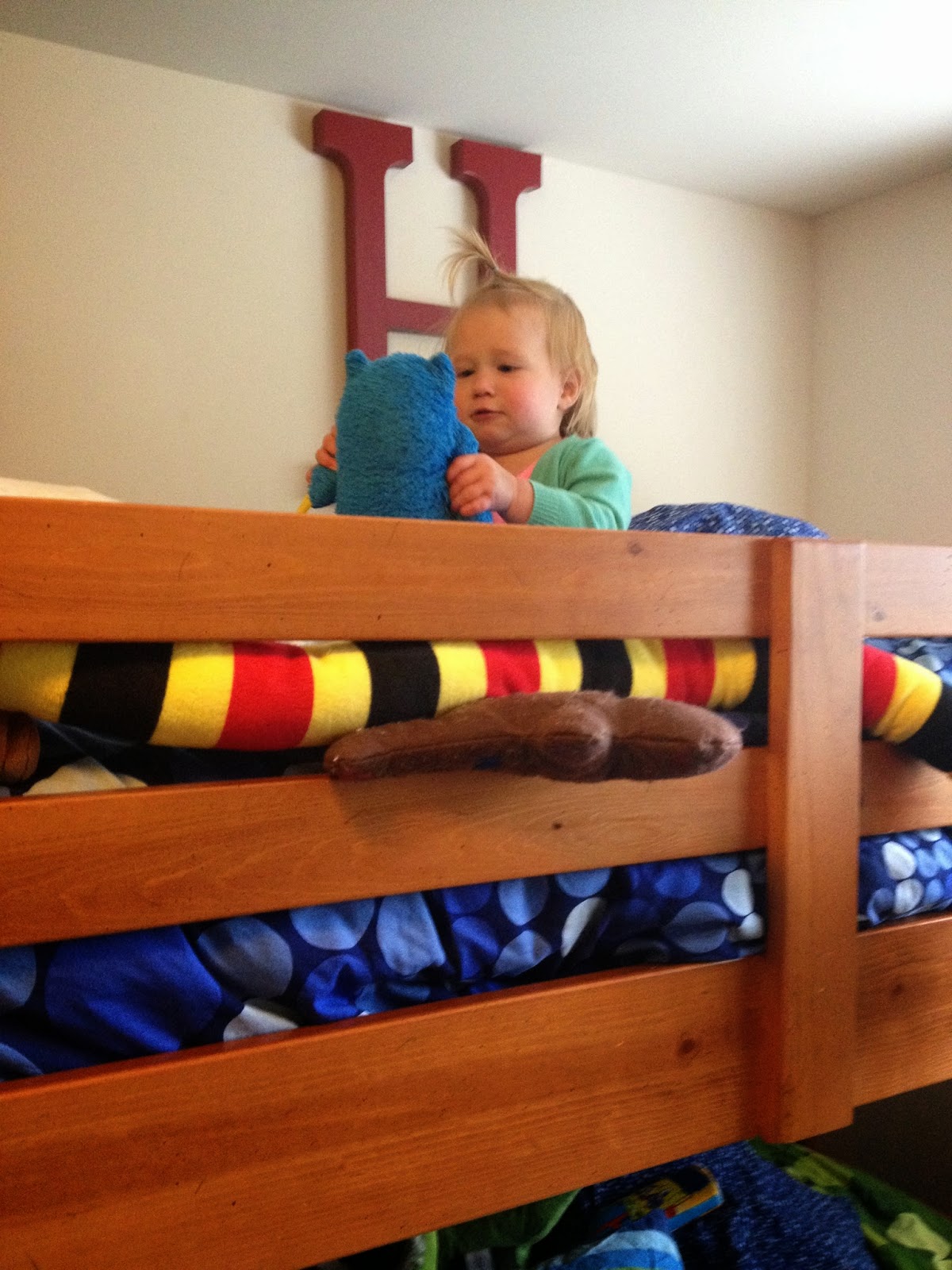 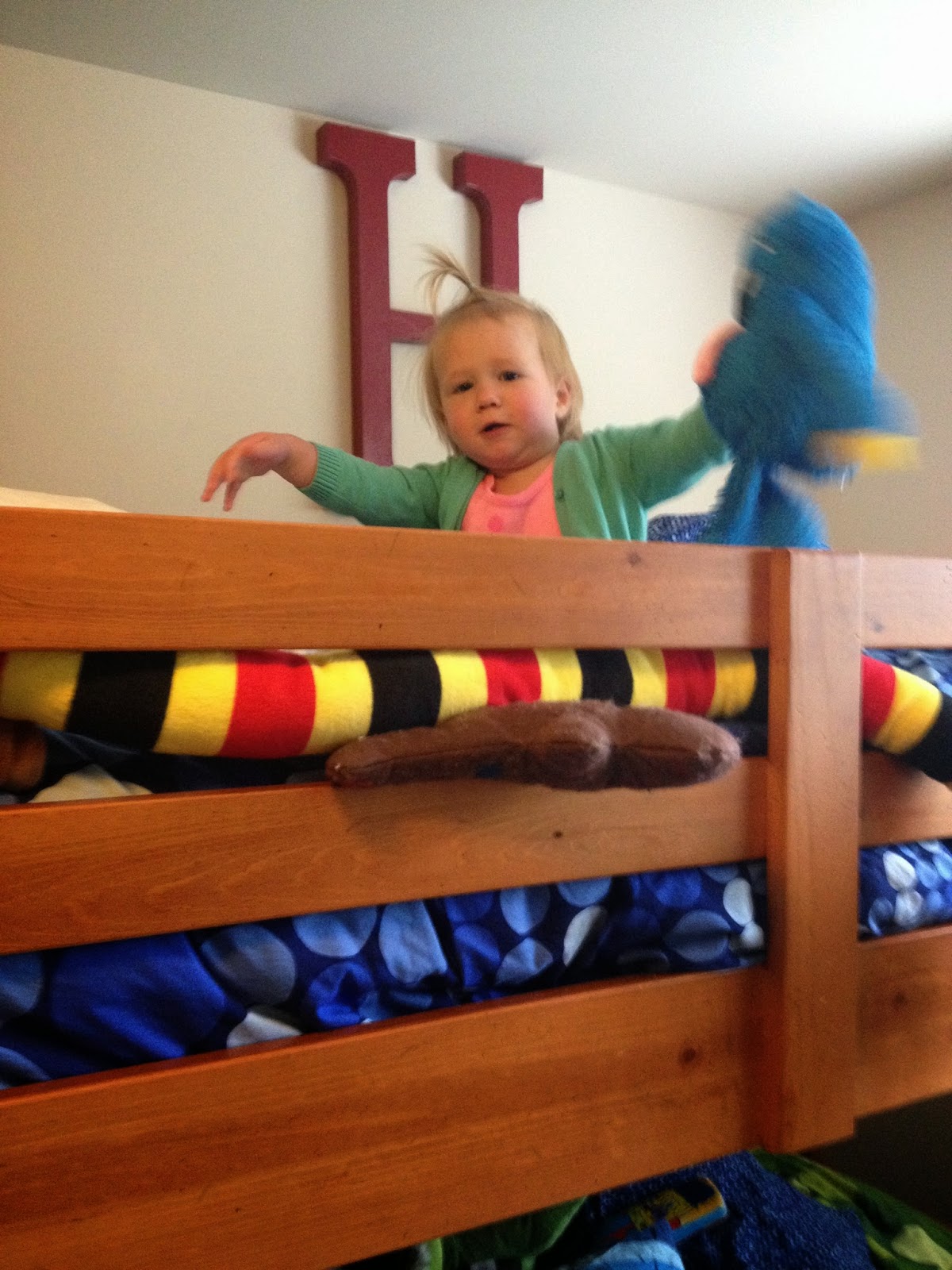 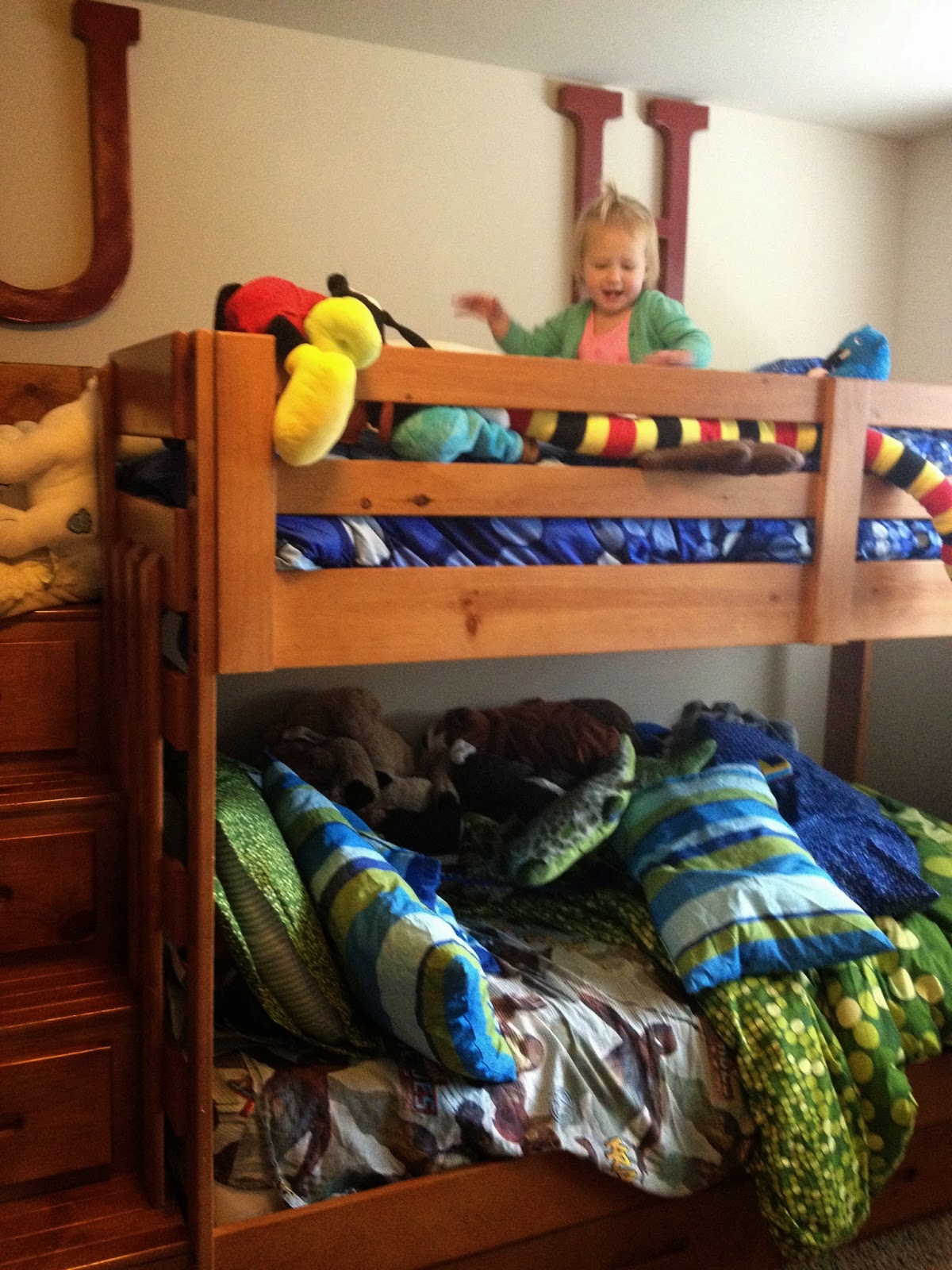 Cooper slays me.  He is a big boy by day and a baby by night. 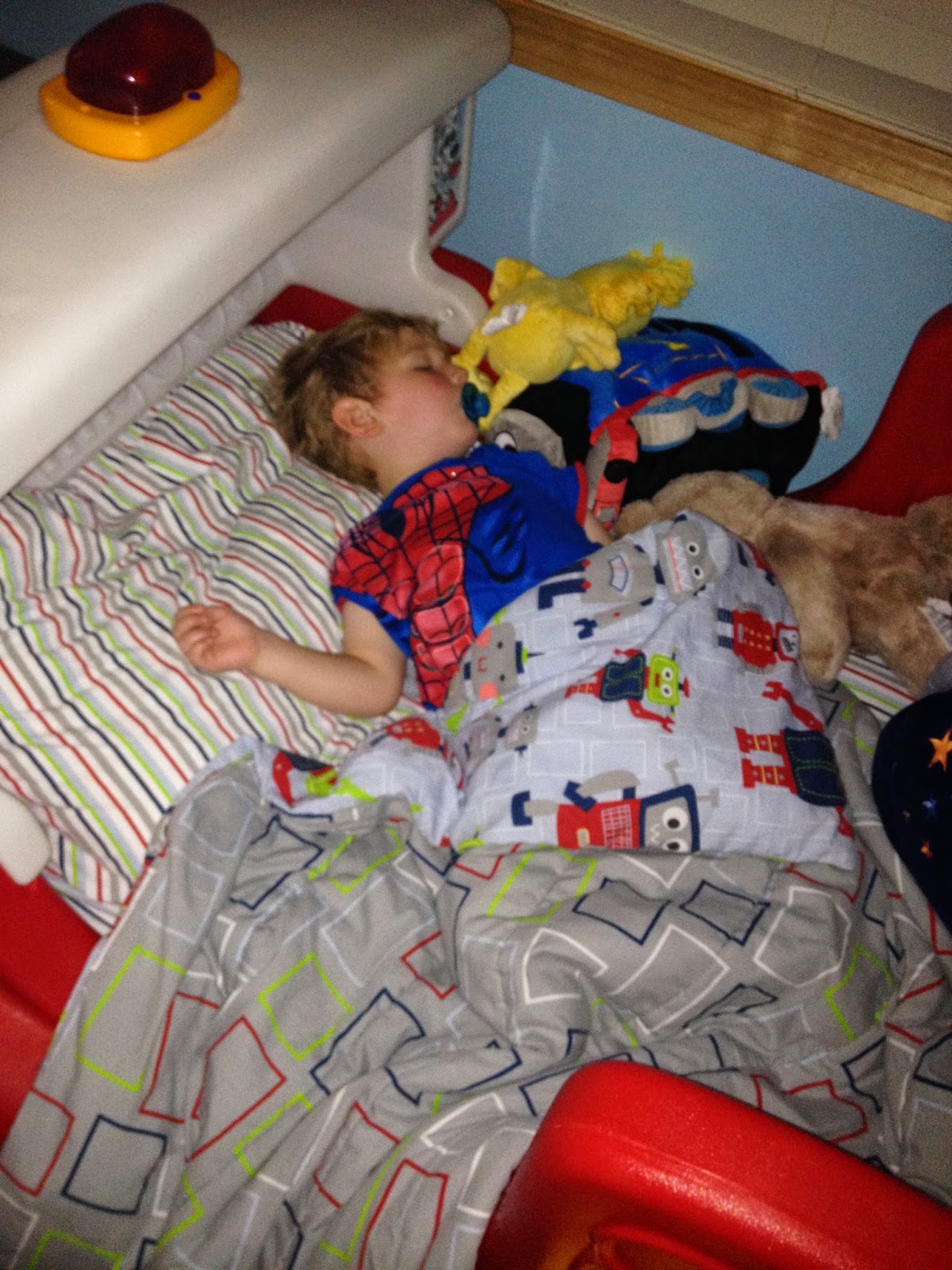 In my last post, I mentioned that I had done everything but eat less to try to lose weight.  And I wasn't really kidding.  I have been using My Fitness Pal on my phone to track calories and exercise, but I have been cheating like hell.  For a year.  Well, that's not true.  This time last year, I lost 11 pounds and then started cheating like hell.  The good news is I kept the weight off, but the bad news is, I really would like to lose 18 more pounds and be 5 pounds lighter than I claim to be on my drivers license.

So, I am back on the MFP, but this time, I am NOT CHEATING. I am also working out everyday, but I am not going to count my exercise calories because I kind of think that's bullshit.  But if I run out of calories and still want to have a beer, I have 350 calories in the bank, KWIM?  MFP says if I want to lose 2 pounds a week (AND I DO), then I need to eat 1200 calories a day, which is not a lot of calories.  Ben is trying to lose a similar amount, and he gets 2200. This is unfair.  (I know it's really not, but damn does it make it hard for me to eat healthy sometimes).

The good news is that I can make these 1200 calories last all day by eating a TON of green leafy veggies and lean proteins.   Yesterday, only 30% of my caloric intake came from carbs.  Pretty sure that was the tequila, triple sec, lime juice, and the handful of animal crackers I ate at breakfast.

Ben and I planned a couch date to finally watch the Veronica Mars movie (LOVED it), and I saved all day for the 712 calories I needed for nachos made with red bell peppers (and a half cup of shredded cheese, possibly my favorite 220 calories of the day) and the single, loaded margarita I slurped right down.  It was worth it because I ate a huge egg white, spinach, gouda, and ham omelet for breakfast and a large salad with green leaf lettuce, celery, and 4 ounces of chicken for lunch, and a tablespoon of chocolate chips when I thought I was going to be too crabby to function in the afternoon. Today I will be able to add in some snacks since we have no gluttonous dinner plans.

For the first time since Cooper was born in September 2011, I can feel my appetite going back to normal.  Breastfeeding has always made me crazy hungry, and now that Dorothy is down to 3 times a day and not at all at night and not really nursing for very long, I think it is finally FINALLY easier for me to eat reasonable amounts of food.  I nursed Cooper well into my pregnancy with Dorothy (BECAUSE HE WAS ONLY 9 MONTHS OLD WHEN I GOT PREGNANT).  Then I was pregnant and hungry.  And then I have been nursing Dorothy since March 2013. Slowly slowly slowly it is starting to just be me in this body again and eating for one when you've been eating for 2 is refreshing.
Posted by Sarah at 9:24 AM

I totally cheat at MFP too!
If you're still running daily, you might want to take your measurements too. I haven't lost any weight in nearly 4 months, but I've had to size down pants twice.