A harrowing tale and some pictures.

Today Ben had to teach, so I took all 4 kids to swimming lessons, which was kind of a bummer because I usually sit by the deep end and chat with other moms while H and J swim and Ben and the babies hang out at home and make lunch.  Taking Cooper and Dorothy means I have to stand in cold water up to my ankles and referee fights over plastic buckets and boats and stop Dorothy from throwing all of the towels in the pool eleventy bullion times.

Swimming lessons end dangerously close to nap time, and Dorothy has been known to fall asleep in the car on the 3 minute drove from the pool to our house, wake up totally refreshed, and refuse to sleep at all for the rest of the day.  Or she falls asleep and I have to magic her into bed with more nursing while the boys run wild all over the house and Cooper falls apart because it is his lunch and nap time too. Or everyone screams while I throw food at them and the pre-nap minutes are hectic and un-fun.

So today, I was prepared.

I made lunch when I was still cleaning up breakfast and plastic wrapped 4 little plates of PB&J sandwiches with no crust, yogurt tubes, peach slices, strawberries, and chocolate chip cookies and stacked them in the fridge.  I packed Dorothy's swim suit in my pool bag along with dry clothes for Cooper, who can wear his swim suit to the pool because he can be trusted not to pee in his swim diaper on the way there.  Dorothy?  Not so much.  Usually, I just take her in her suit anyway and chance a leak (SO CLASSY-- both what I do with her diaper situation AND that pun) and change her into dry clothes at home, but I wanted to get her home dry and ready to eat, and I couldn't take her in her suit because we had to walk to school and pick up the big boys from gymnastics before lessons, and, you know, the whole wet swim diaper thing.  Fascinating detail, huh?

My point is, I put a lot of thought into how to make the morning go smoothly.  I even loaded up the car while feeding everyone a snack outside before we left so no one would freak out when denied snack bar snacks.  I made sure the big boys changed at home and left their dry clothes in the laundry room so they could get dressed for lunch.   I even set the table with cups and napkins so I could plop everyone's plate down the second we walked in the door.  I even went to lessons early so they could all play together in the shallow end before the big boys had to go to class. I WAS PREPARED.

It was pleasant at the pool.  I chatted with a really sweet nanny while Cooper played with her 3-year-old charge.  The kid asked me once what Cooper said when Coop told him he was going to get goggles (sounds like cockles), but other than that, they chatted and played happily for 30 minutes.  Dorothy splashed and stacked the towels a hundred times by the edge of the water and danced and very seriously walked the perimeter of the baby end  to say hi to everyone she saw.  Harry and Jack both appeared to be swimming well and following directions.  I was so proud of myself and my can-do attitude.

And then I took Cooper and Dorothy into the locker room to put on their dry clothes and all hell broke loose.

Cooper didn't know that he was getting dressed at the pool instead of going home wet like usual, and he was really not pleased to have to go in the ladies' locker room with me instead of walking through the boys' with the big kids. Then when he did know he was getting dressed, HE DID NOT LIKE IT. Dorothy HATES getting her diaper changed anyway, and she really disliked the benches in the changing room.

Cooper stood next to me screaming at the top of his lungs while I dressed a squealing Dorothy and talked to him like I imagined Daniel Tiger's mom might (I can't understand you when you scream at me, but if you use your big boy words, I can help you) and then Dorothy ran away while I dressed Cooper and I had to leave him yelling on the bench with one arm in his shirt to go snatch her away from the water's edge.  I also left him sitting on the floor screaming FLIP FLOP because his flip-flops were incorrectly positioned on his toes while I grabbed Dorothy out of a bathroom stall.  A mom down the street with 2 little kids roughly Coop and Dorothy's ages who might be pregnant with number three said , "Oh, this is a rough transition, huh?" and I murmured something about them being hungry, but I wanted to scream KEEP THAT BABY IN THERE!  YOU DON'T WANT MORE OF THIS! but I didn't, mainly because  am not 100% sure she is pregnant, not because that's a crazy thing to think/scream. which it is, but my filter dissolved with all the shrieking.

I ended up having to leave Cooper (with Harry watching him) next to the clubhouse and run Jack and Dorothy to the car and then run back to get Cooper because he was just FREAKING OUT about his flip-flops (they are old Tevas of Jack's and they just don't quite work for him but he loves them and I threw them away when we got home-- don't tell him that) and needed to be carried but I didn't have the arms.

It really sucked is what I am trying to say.  The big boys were charming and delightful, though, because they could tell I was about a half a tantrum away from committing myself to the hospital after dropping the whole vanful of them at the nearest fire station.  Harry even road in the jump seat between the babies and kept them awake and sort of happy until we got home  where everyone ate their lunch.  The babies went to sleep. The big boys went downstairs.  I ate a bunch of chocolate chips from the bag and started at the Internet.

Ben dressed Dorothy like a little hipster the other day, and I LOVED it. 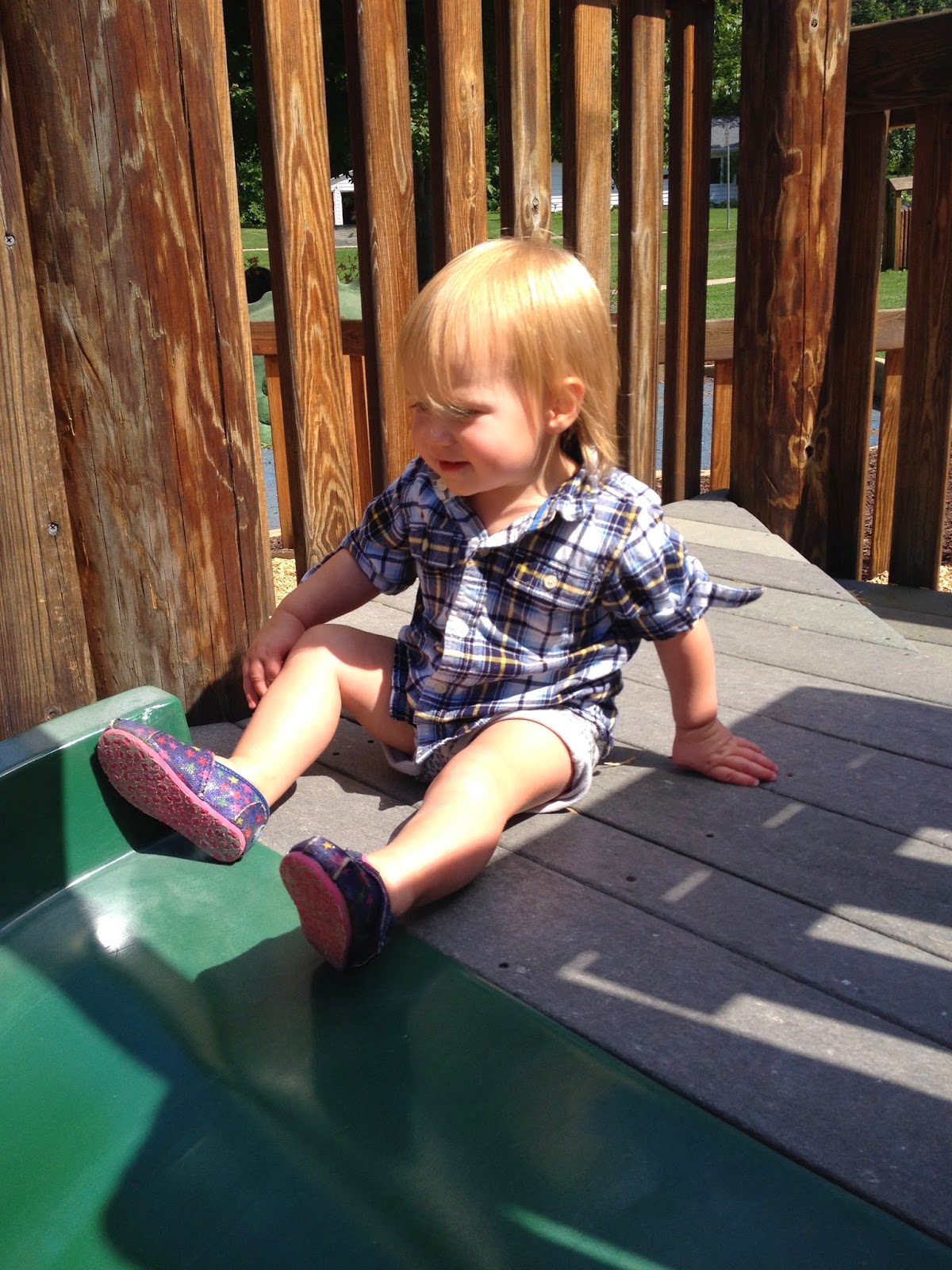 Jack and his mini-me 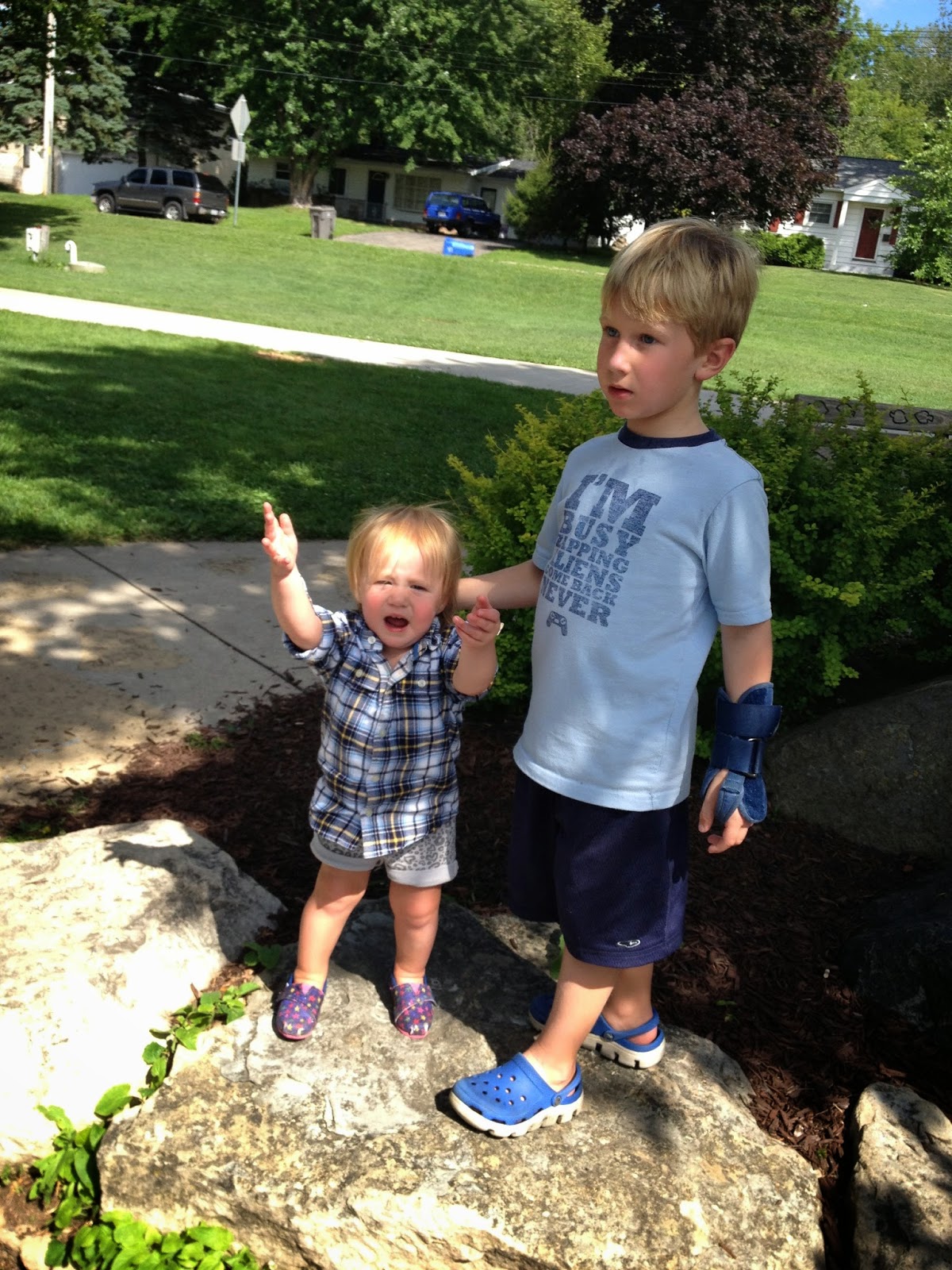 I told her to kiss the dragon.  She was skeptical. 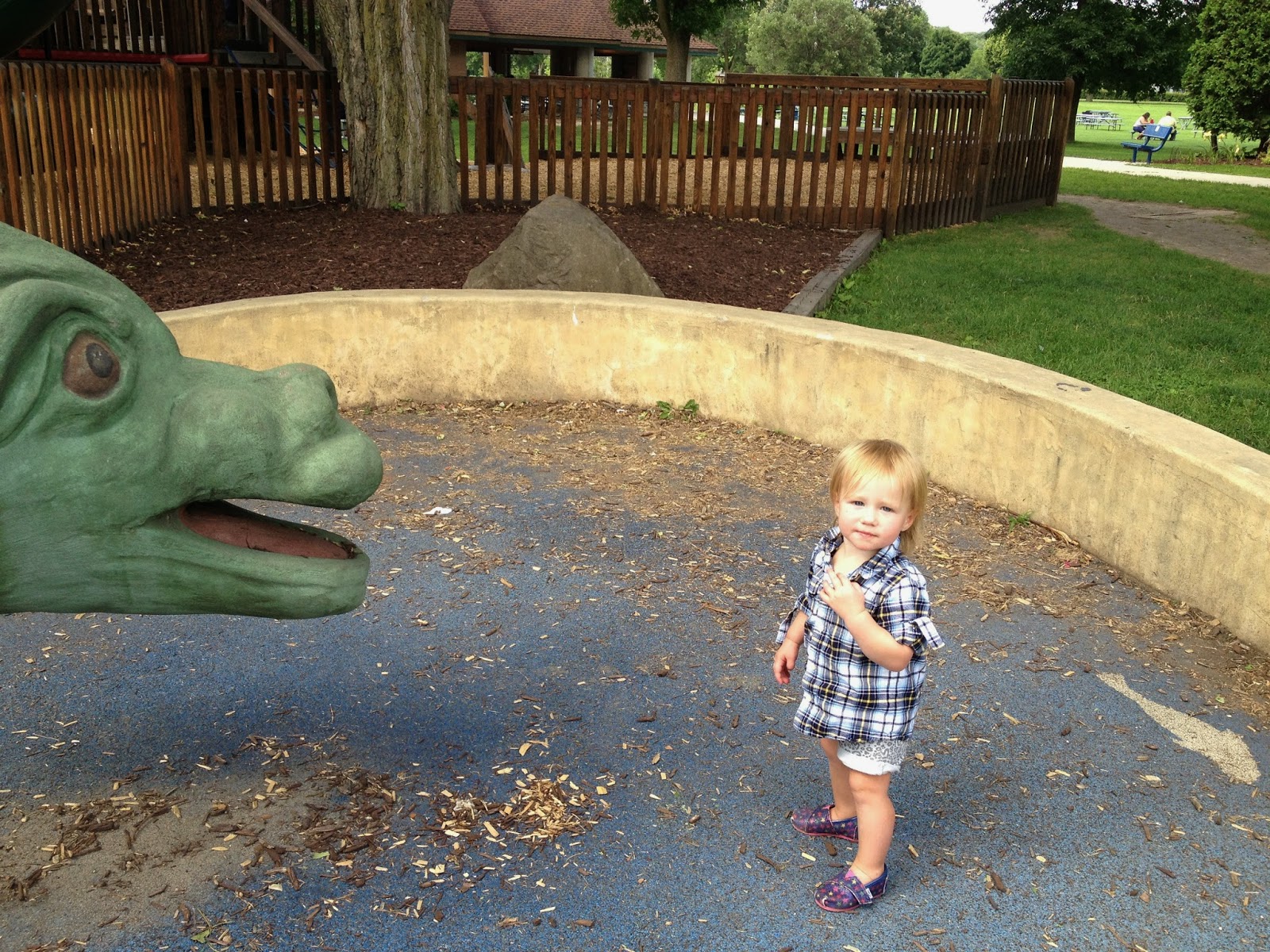 But she tried it. 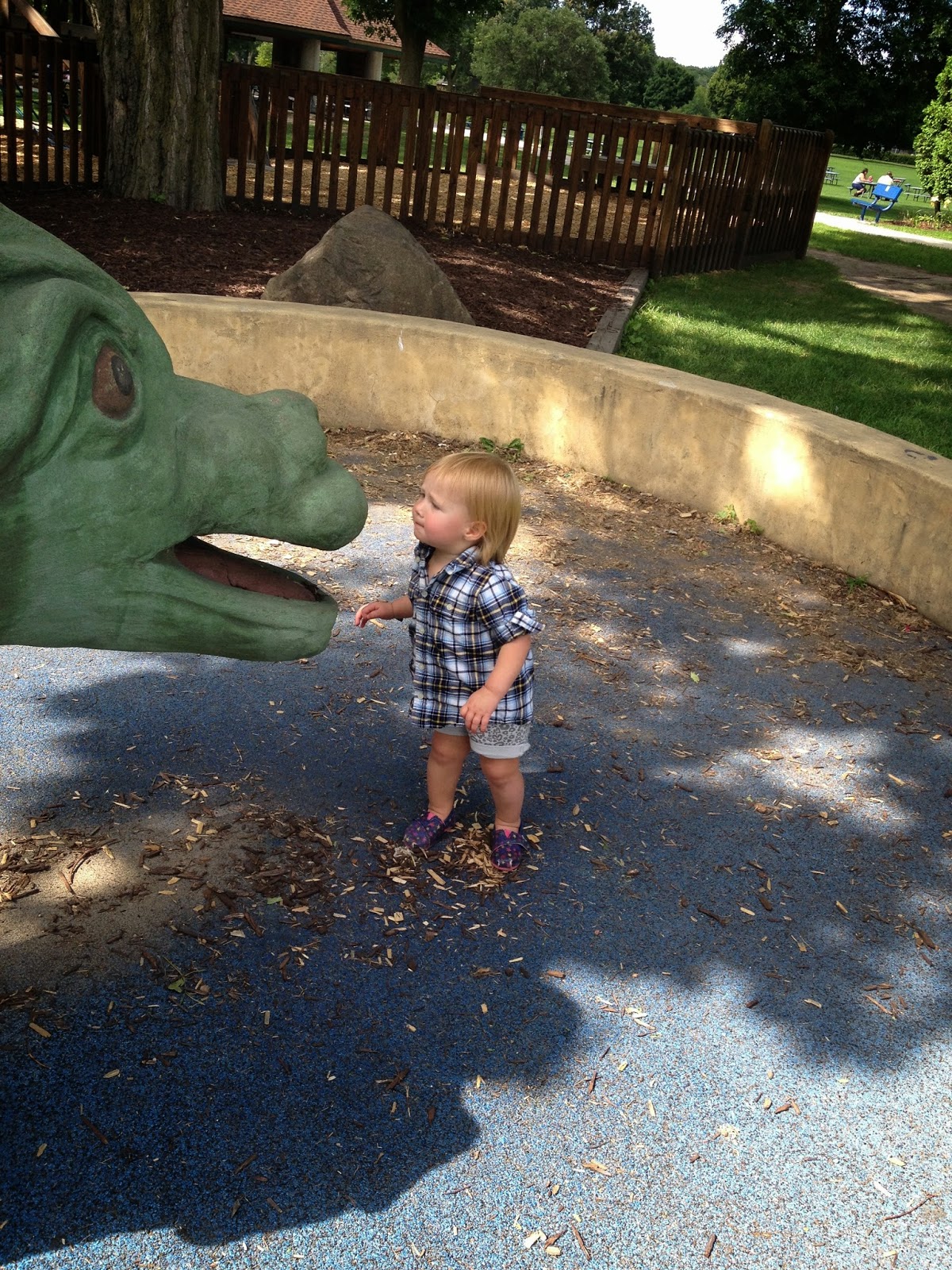 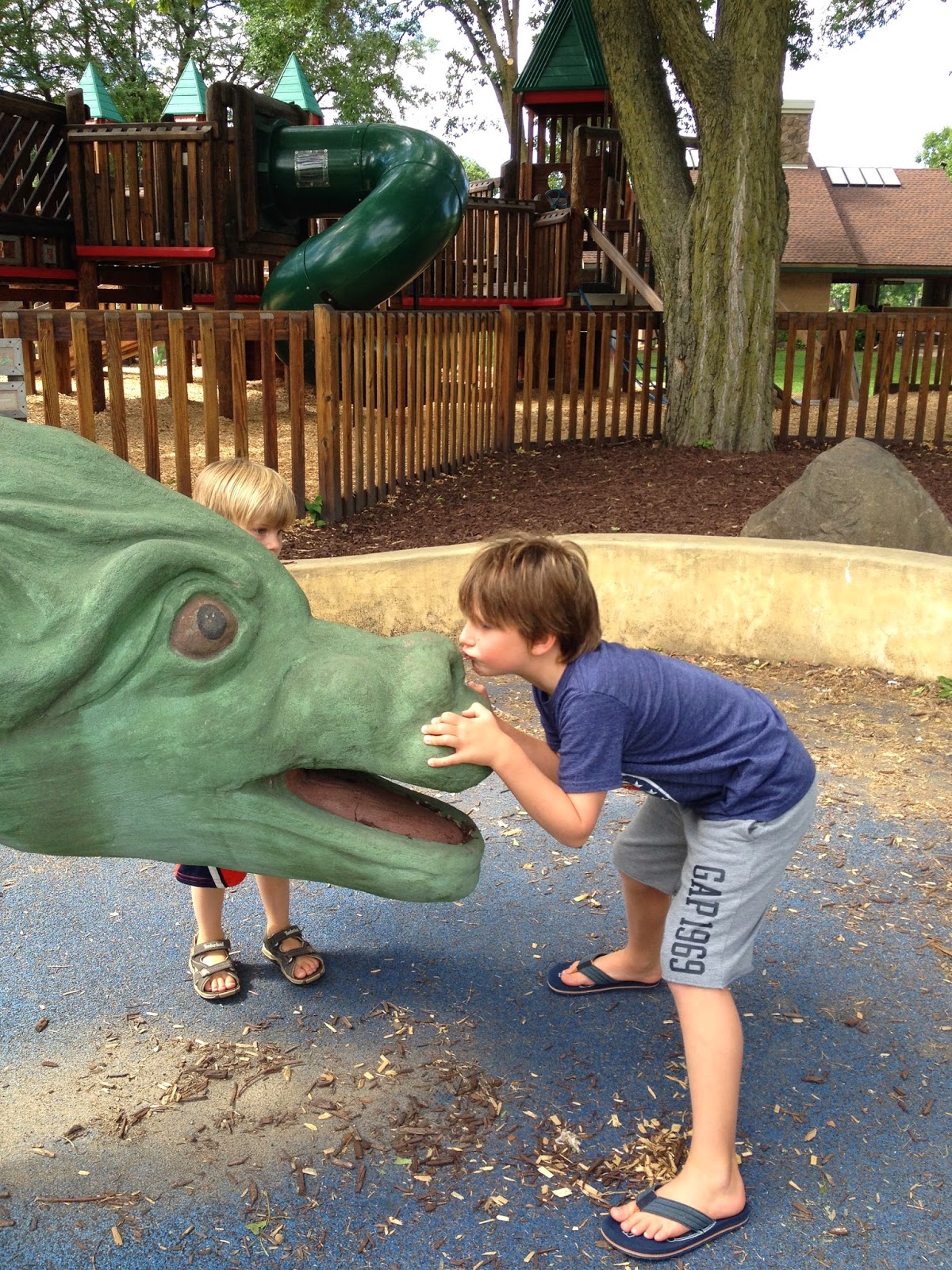 Harry showed Dorothy how to smell the flowers 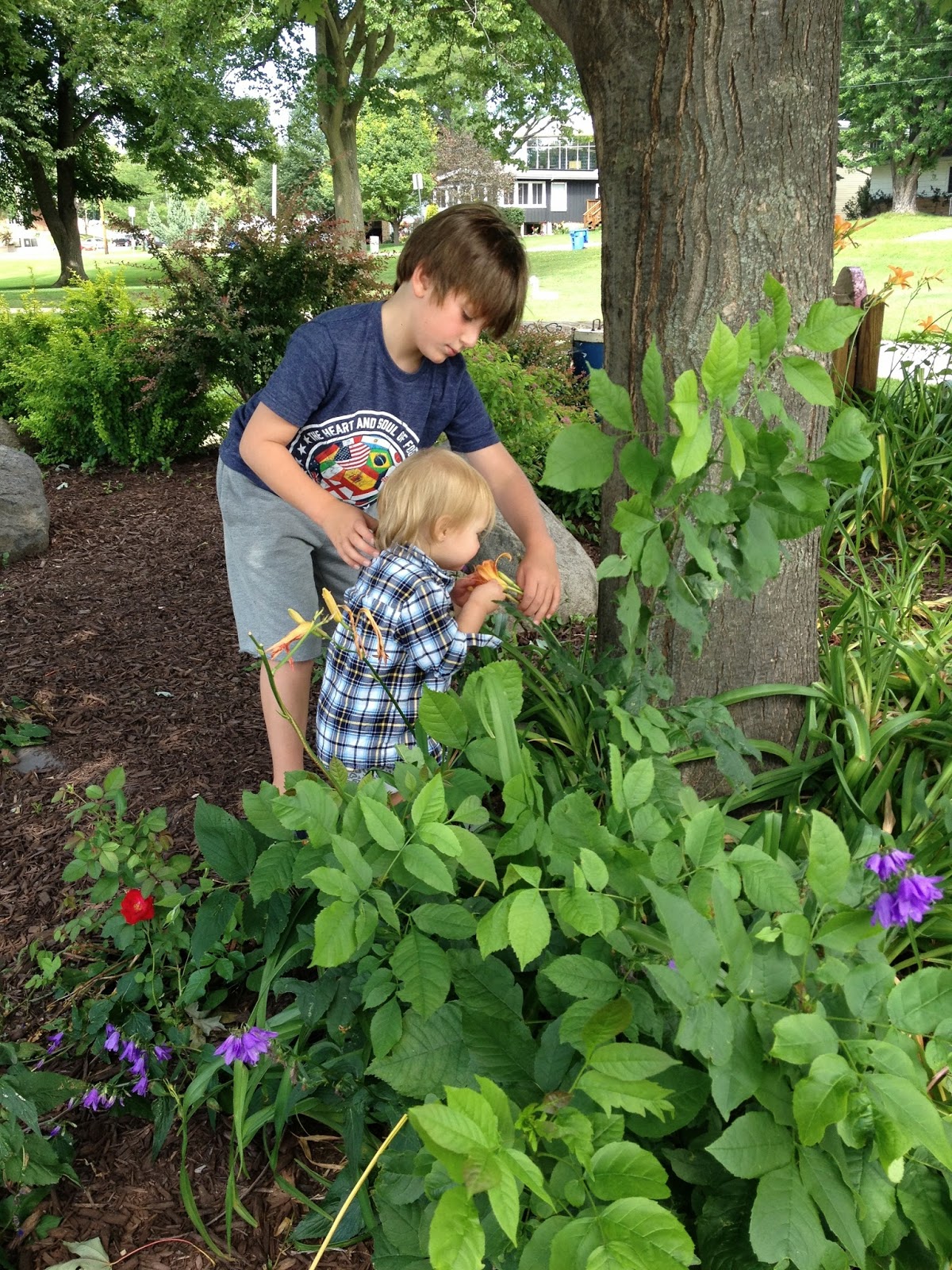 She ended up kind of eating them 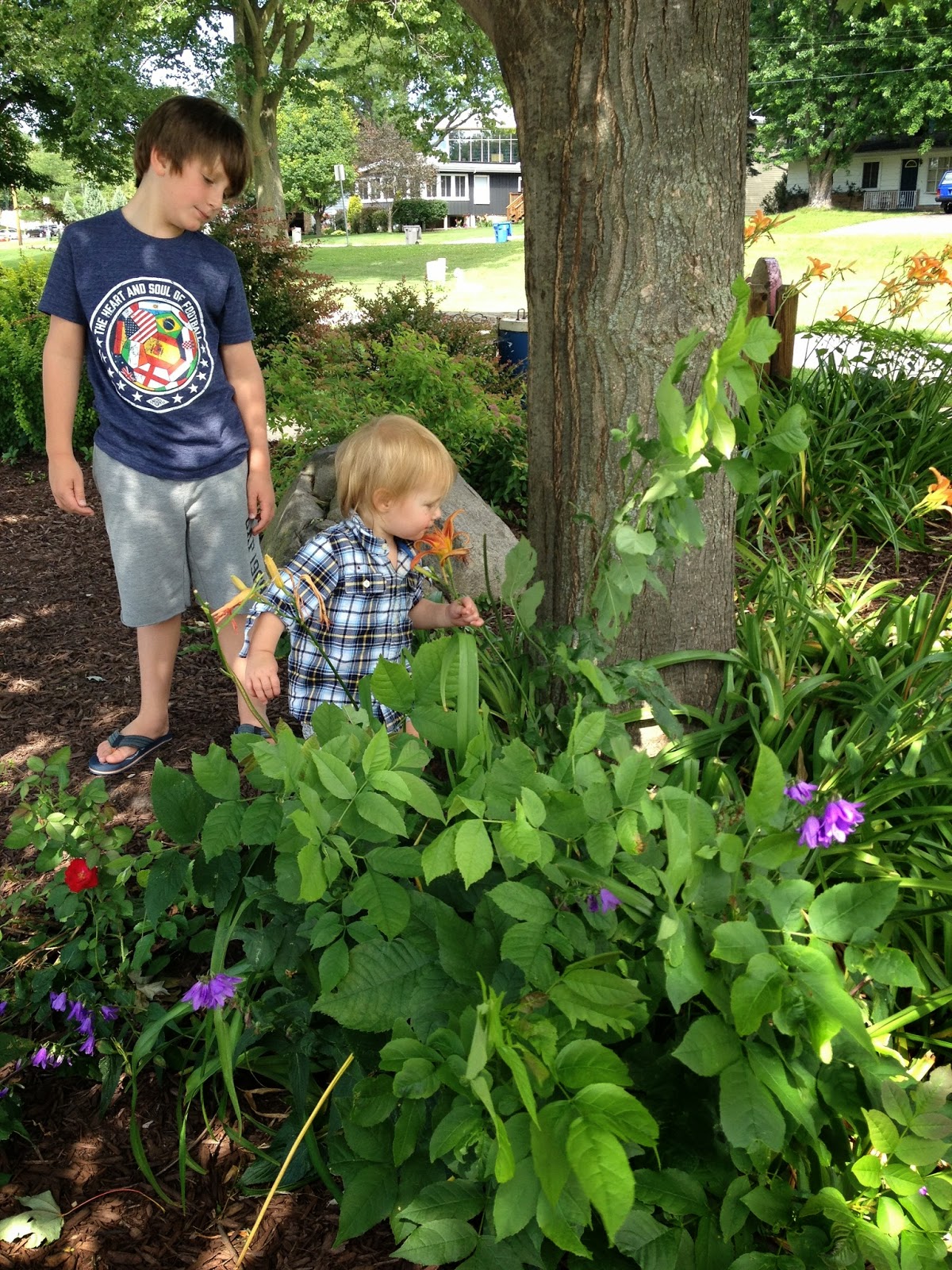 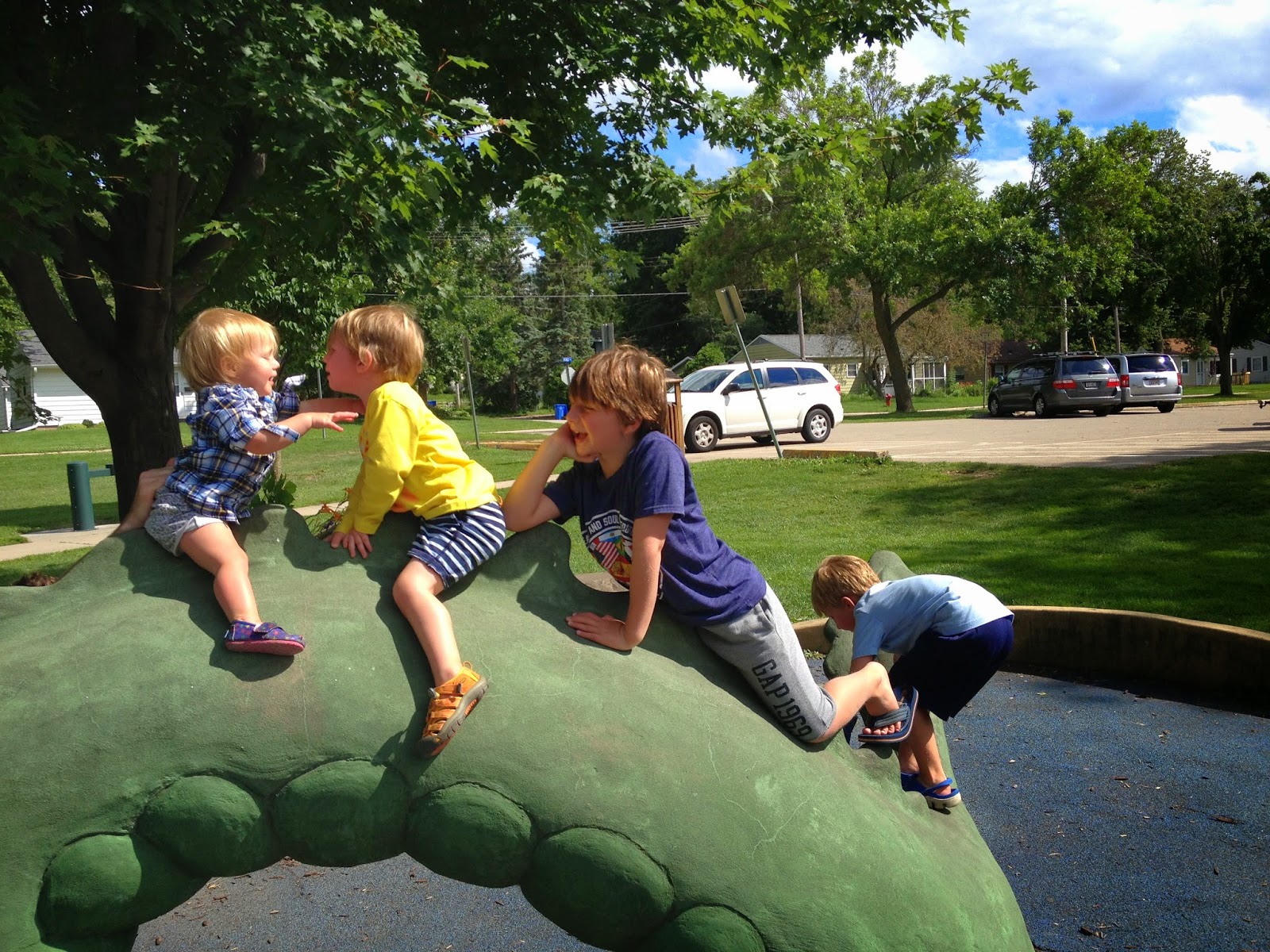 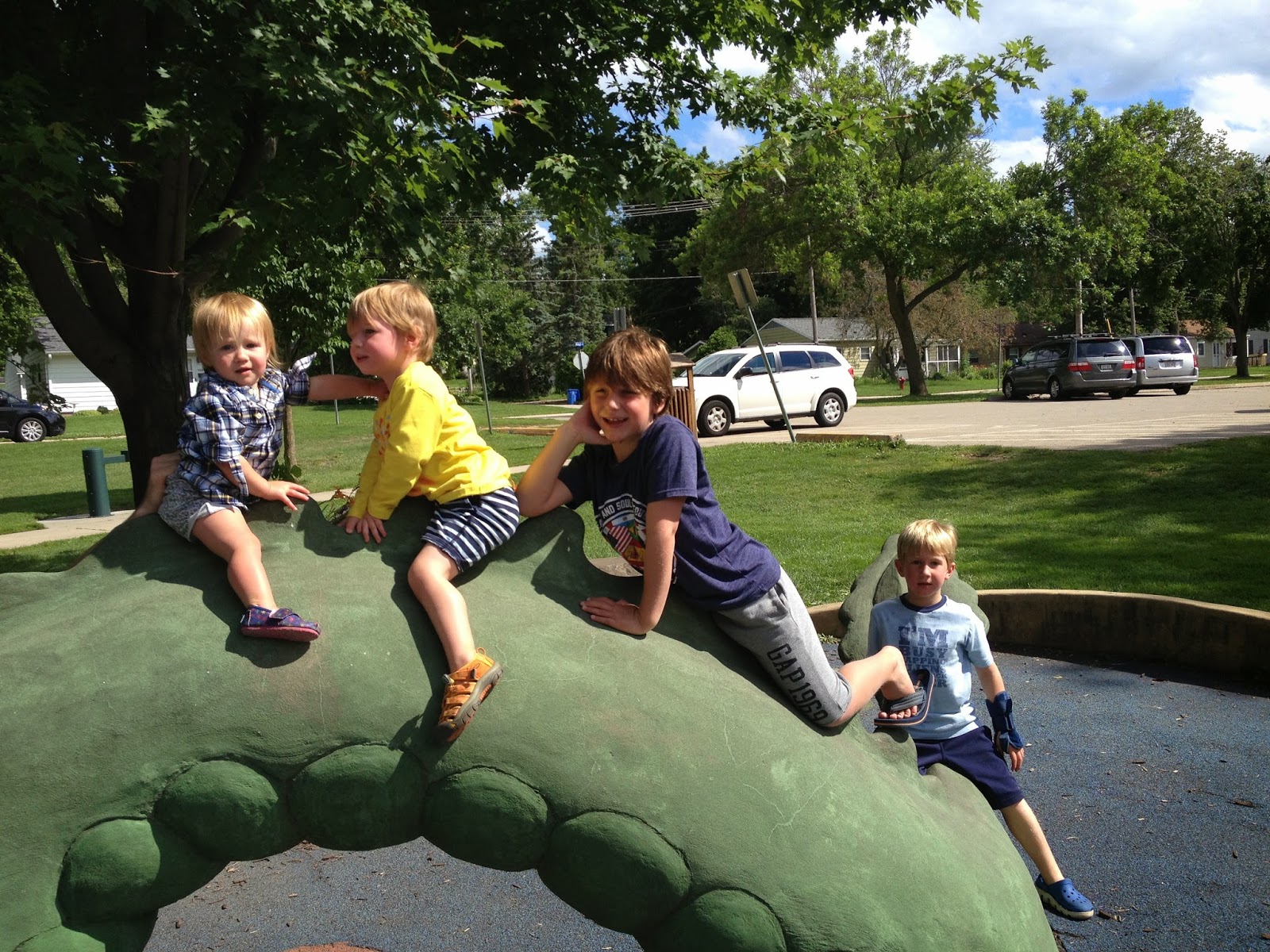 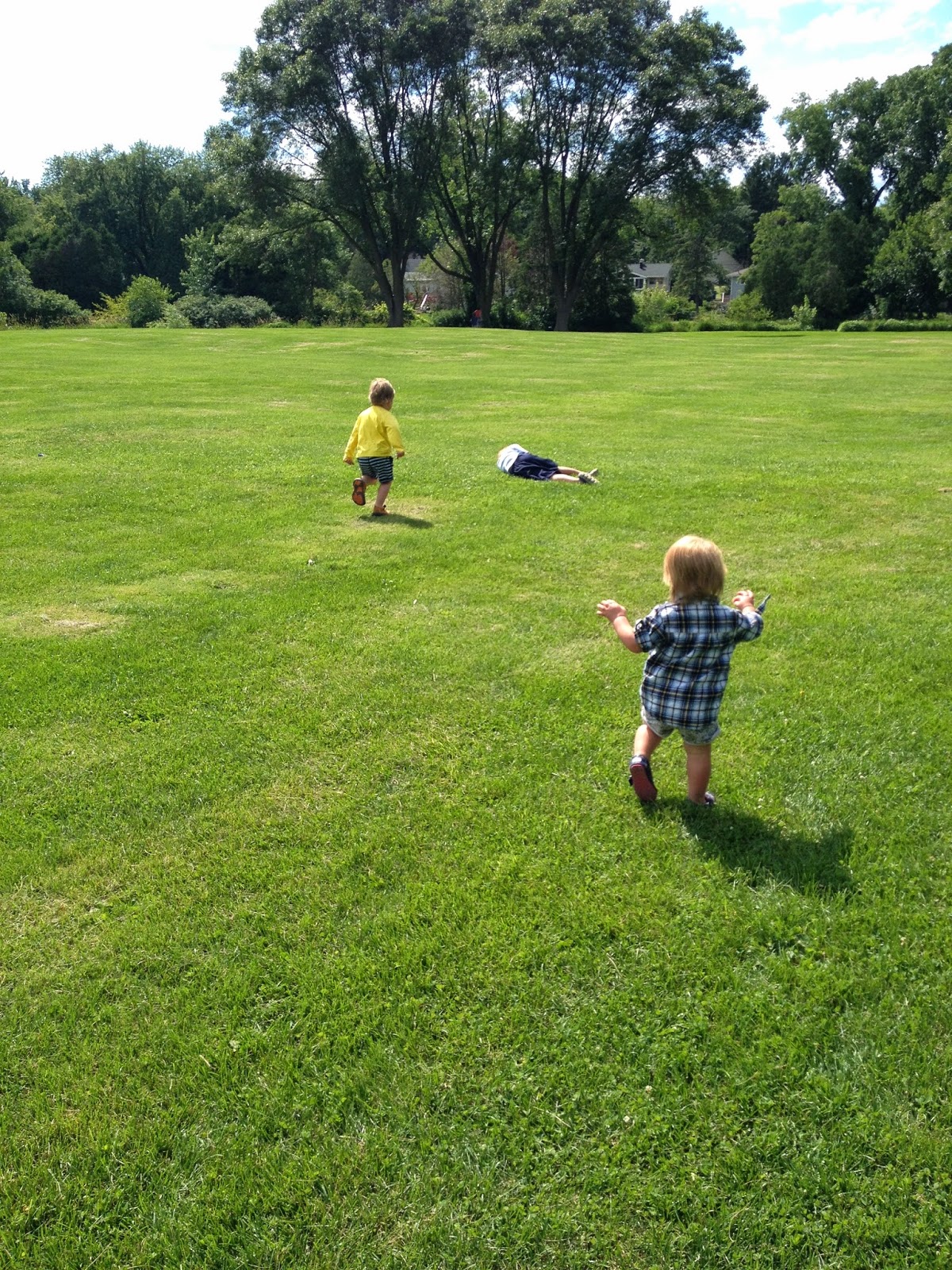 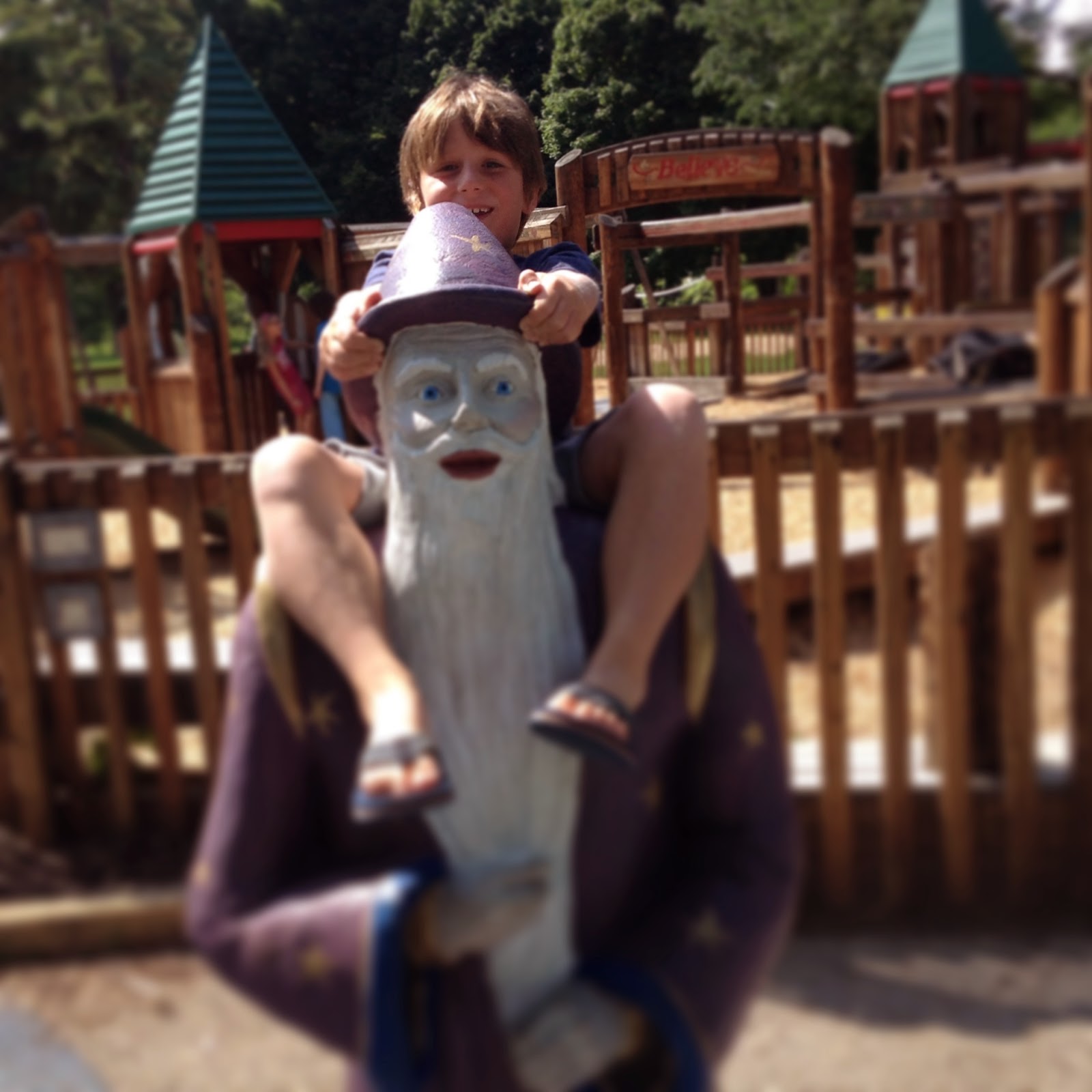 I love these new Target carts-- so, so perfect for Dorothy and Cooper.  And room for more kids! 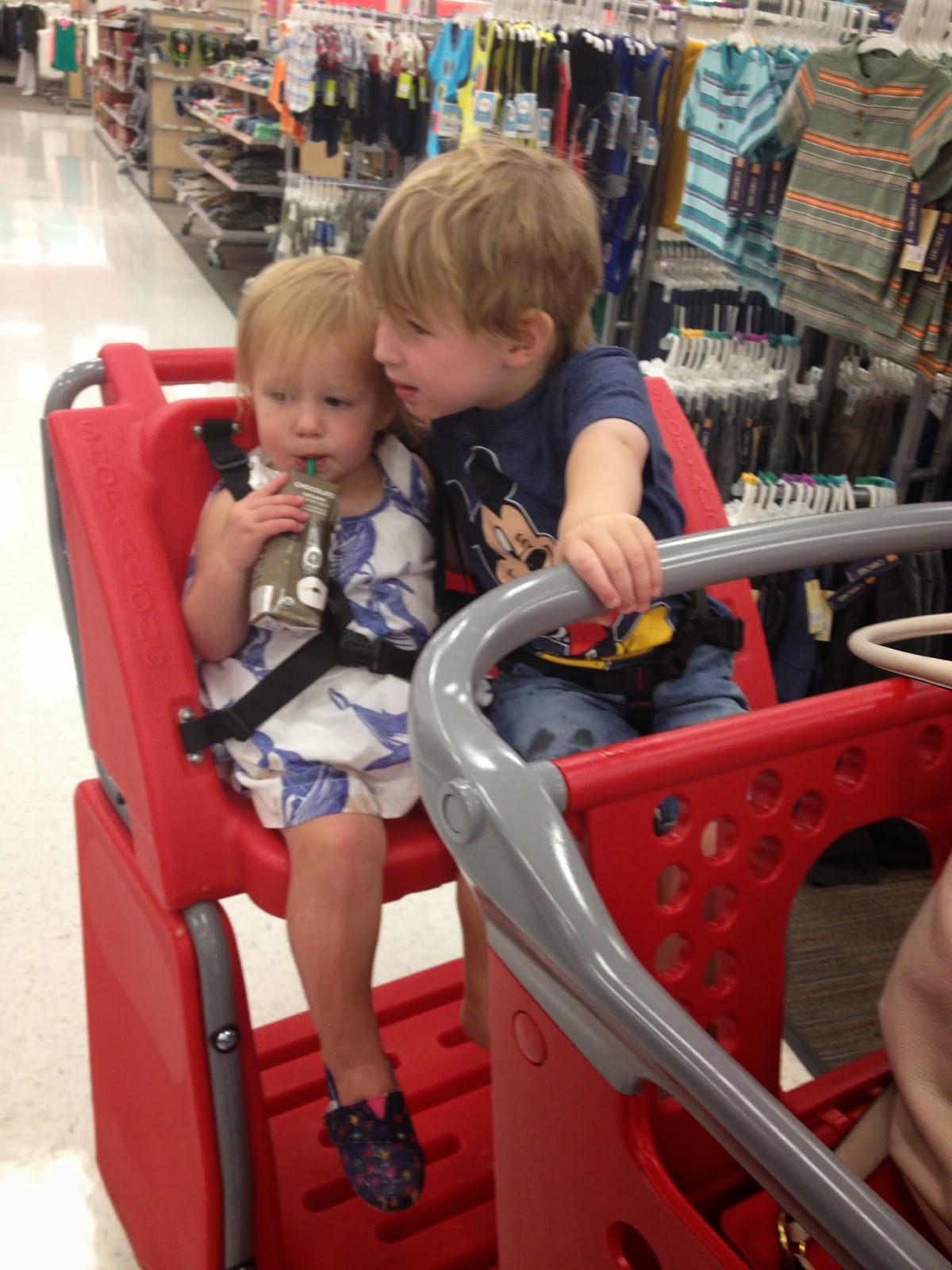 Working on pooping on the potty.  Only once so far in Harry and Jack's bathroom, which features a counter top right next to the toilet, and Cooper whacked his head on it when he was flushing and has not pooped in the potty since.  Erm. 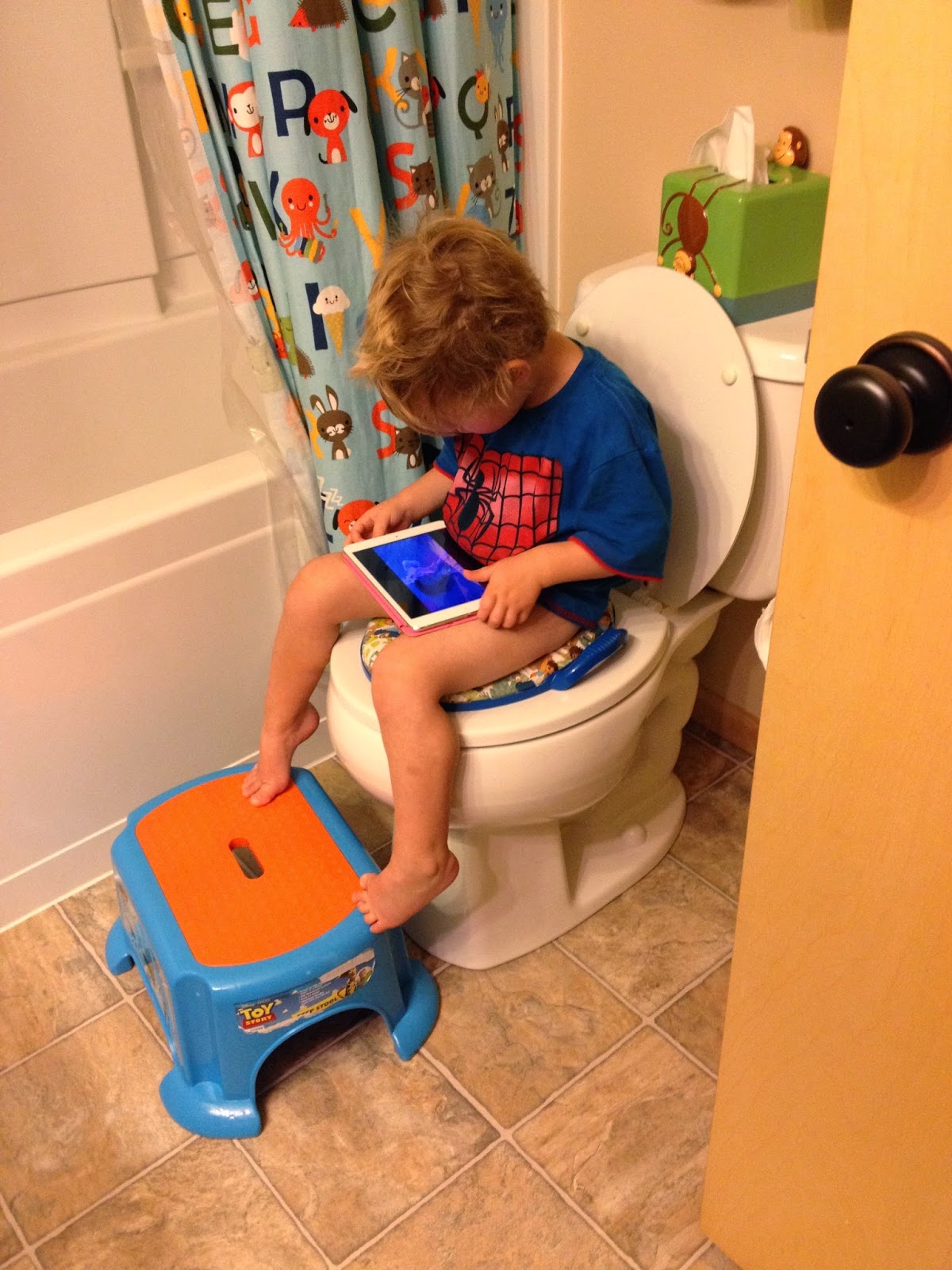 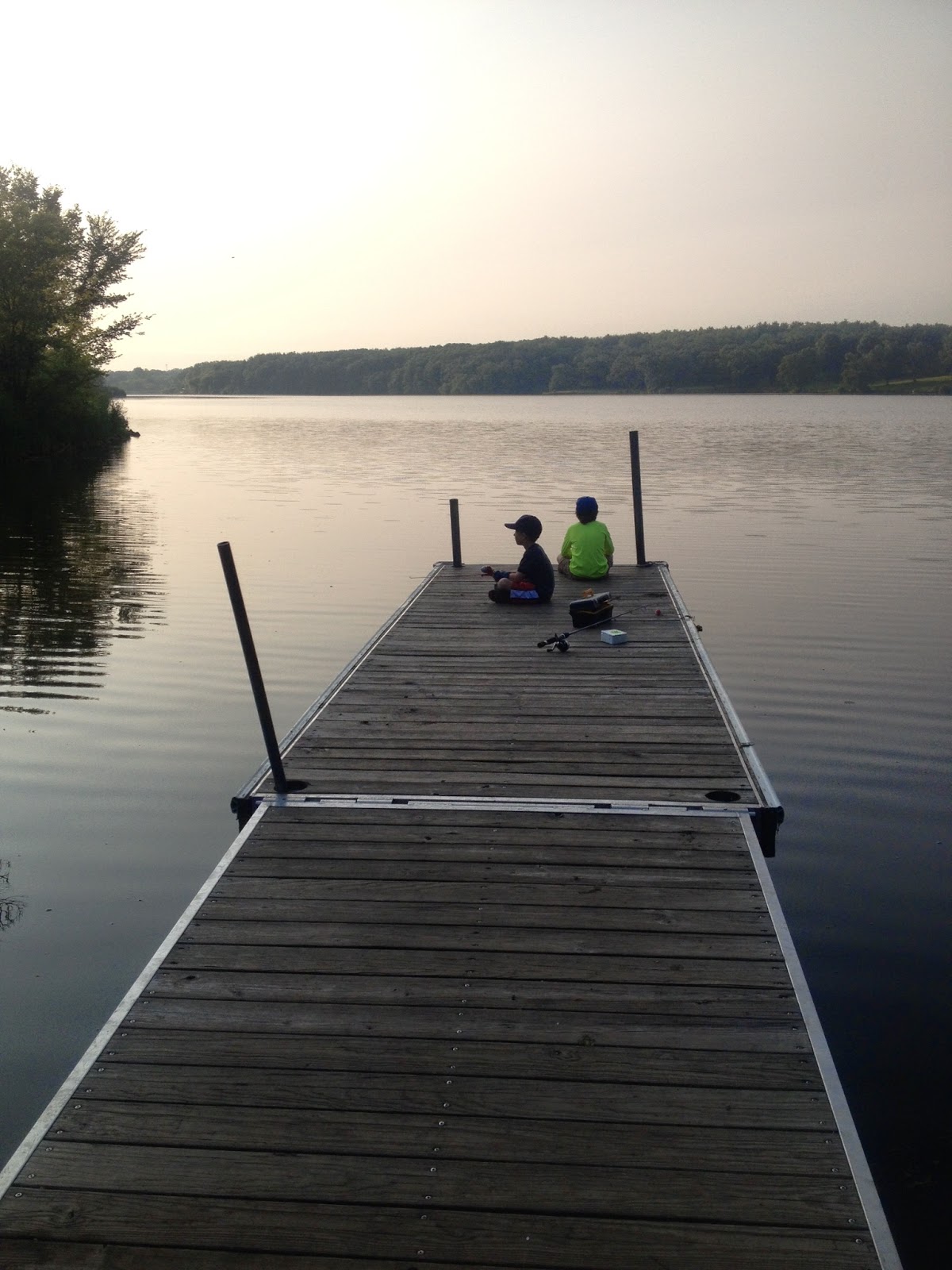 Skateboarding home from the park 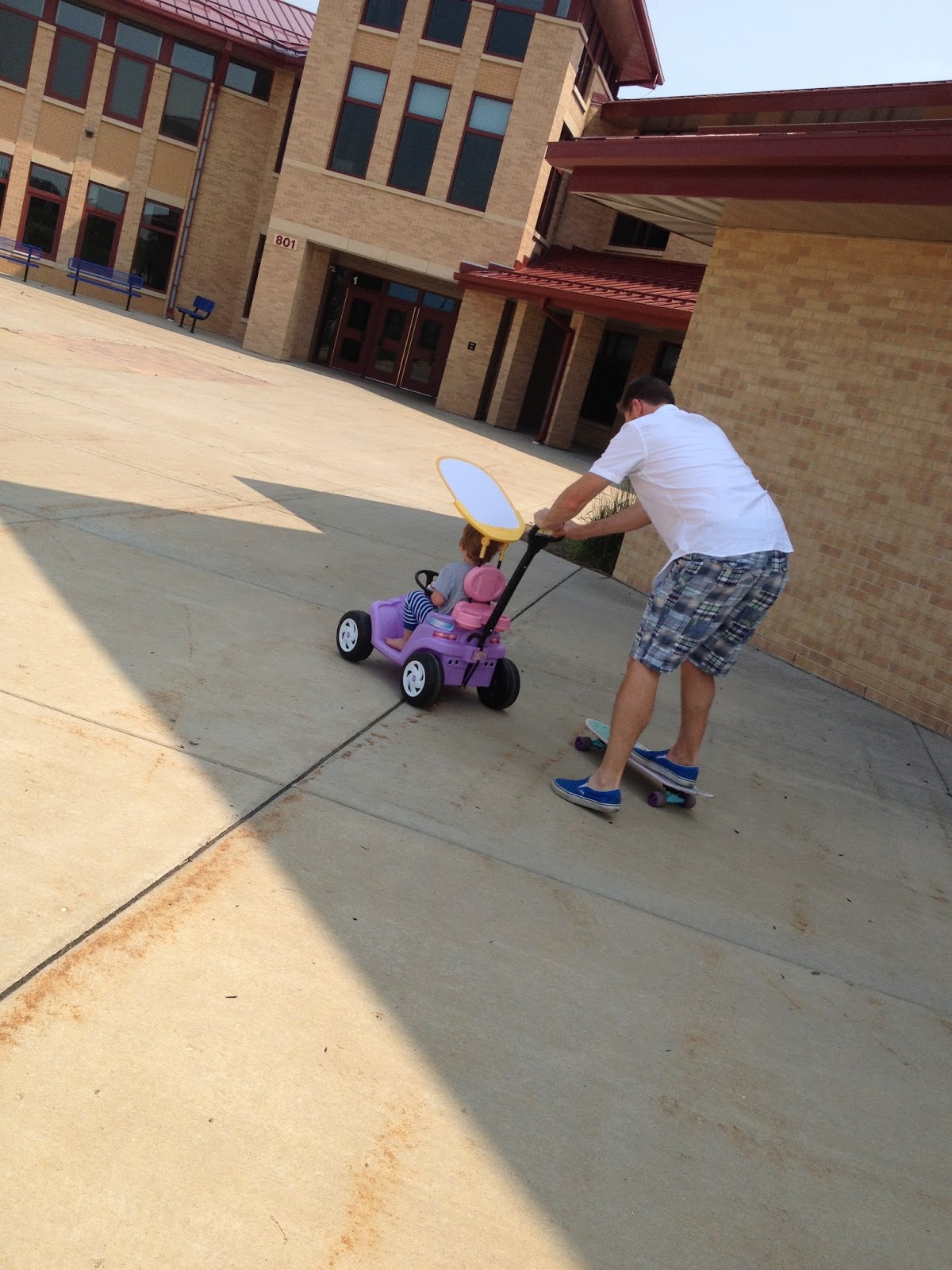 I rode in the jump seat on the way to the fair County Fair on Saturday, and we packed the van with its maximum 8 people. (and there's still room for luggage and pets). 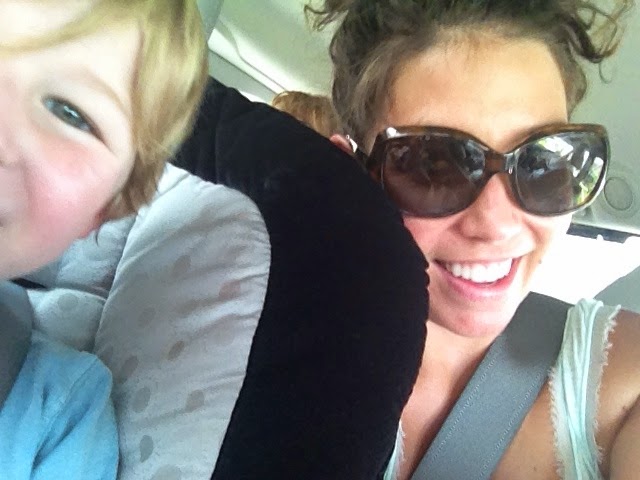 Ben, my mom, and the kids 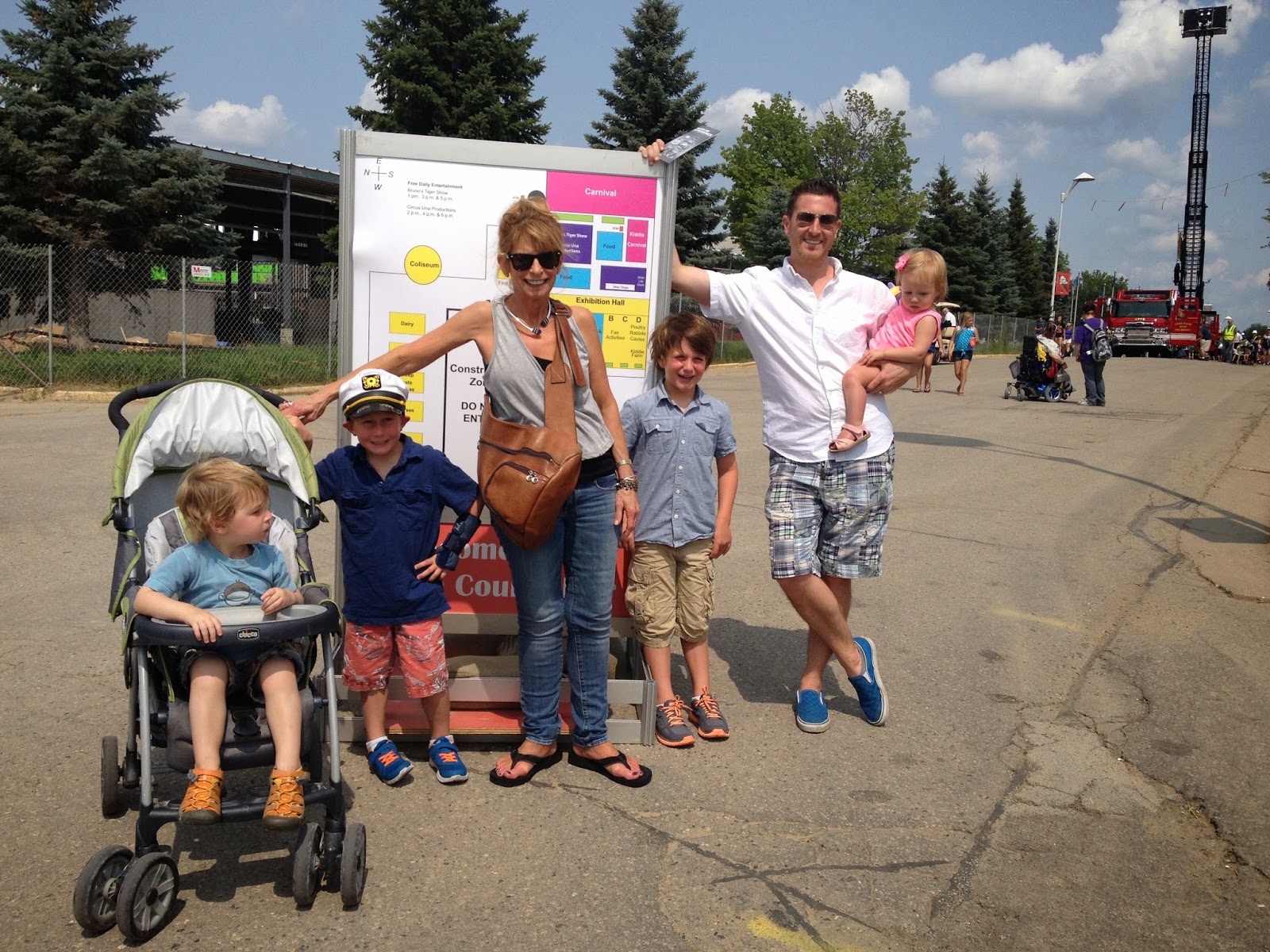 And one with me! 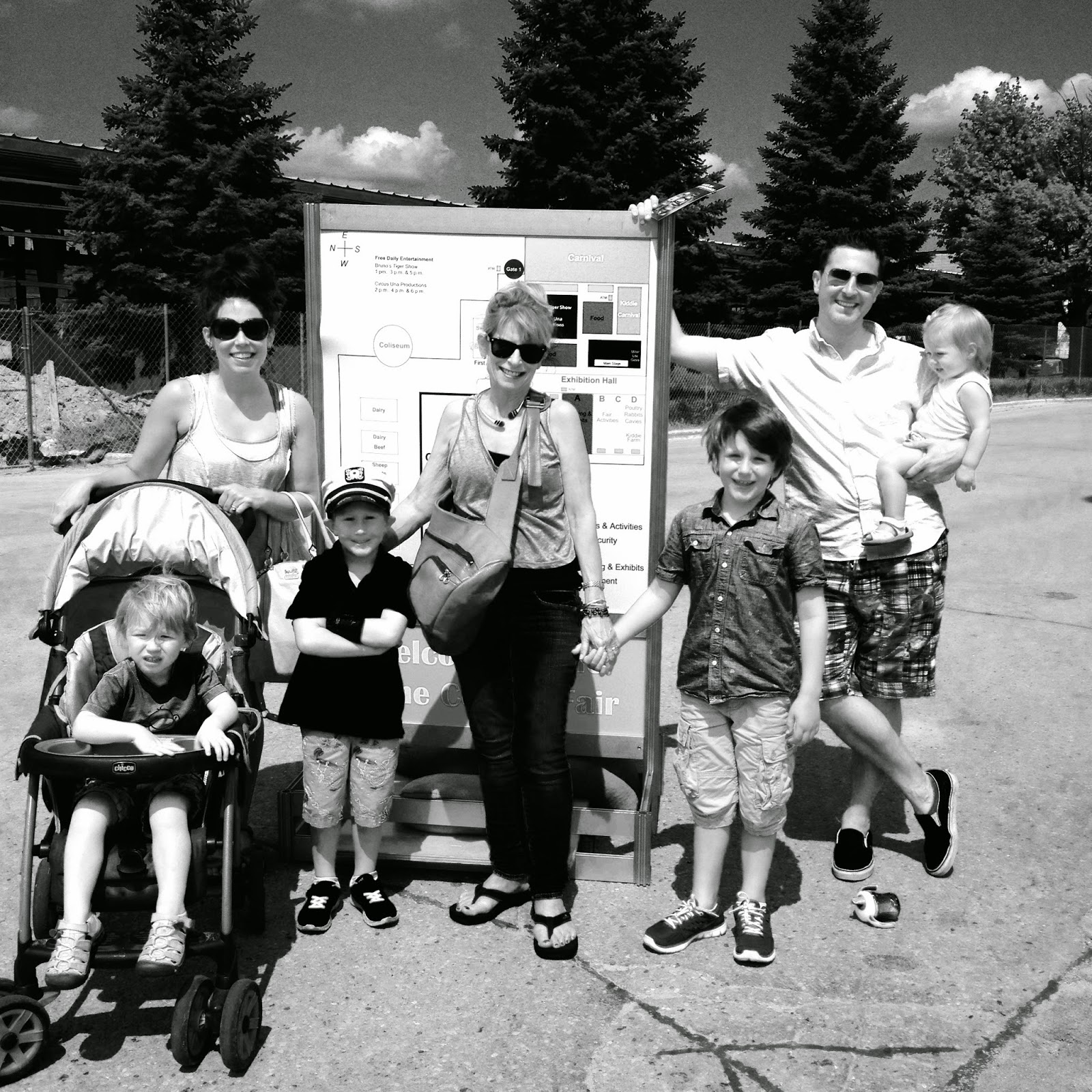 Hanging on a fire truck 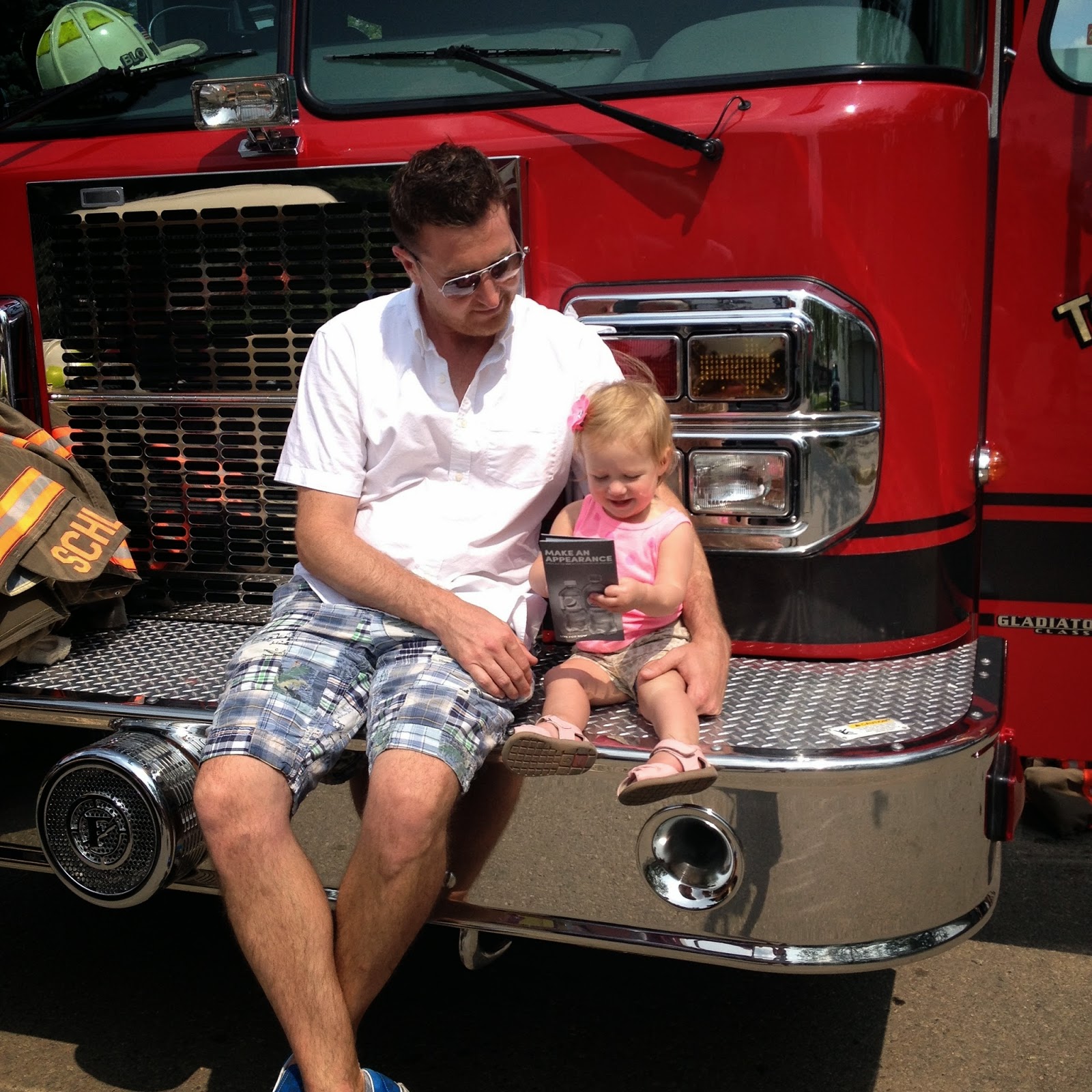 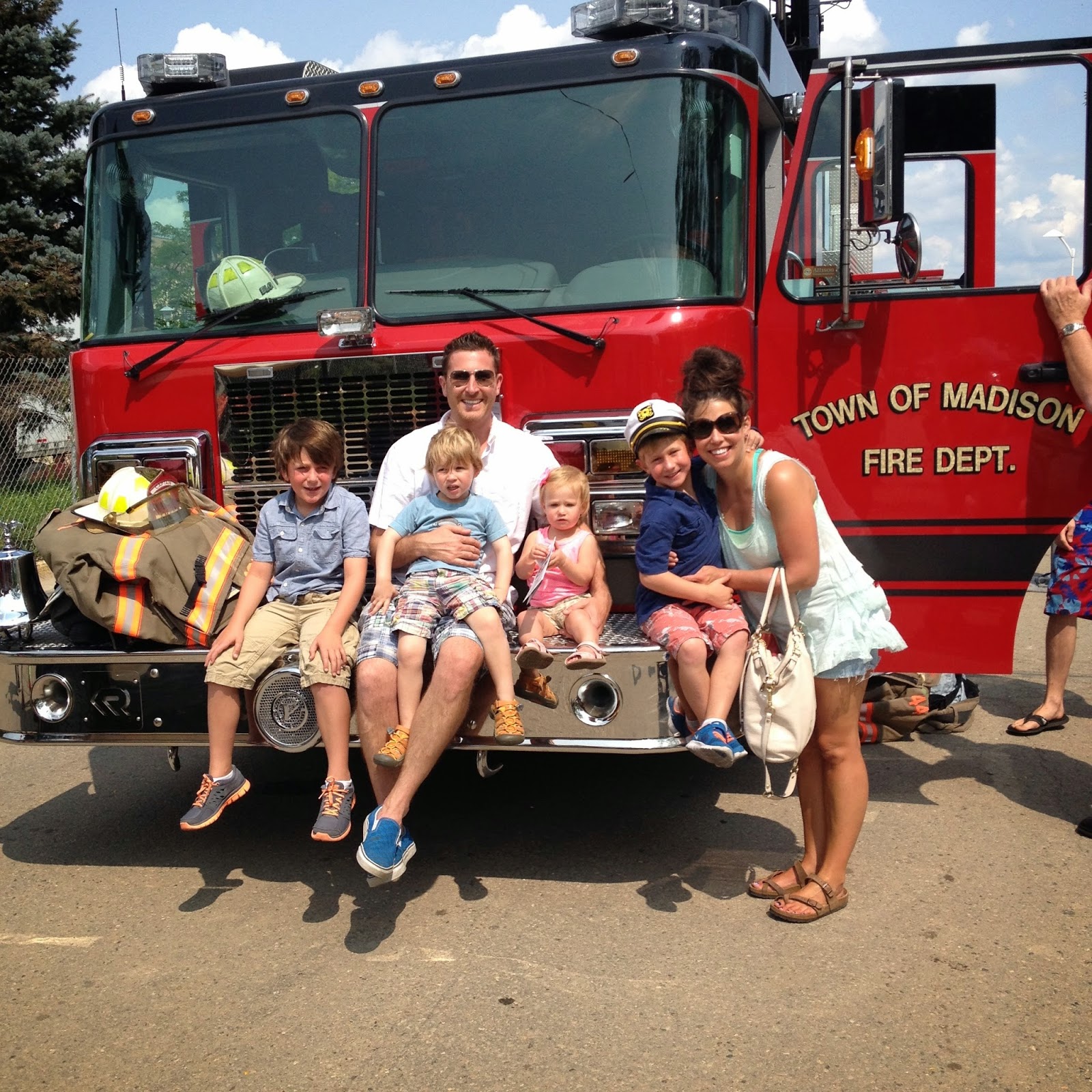 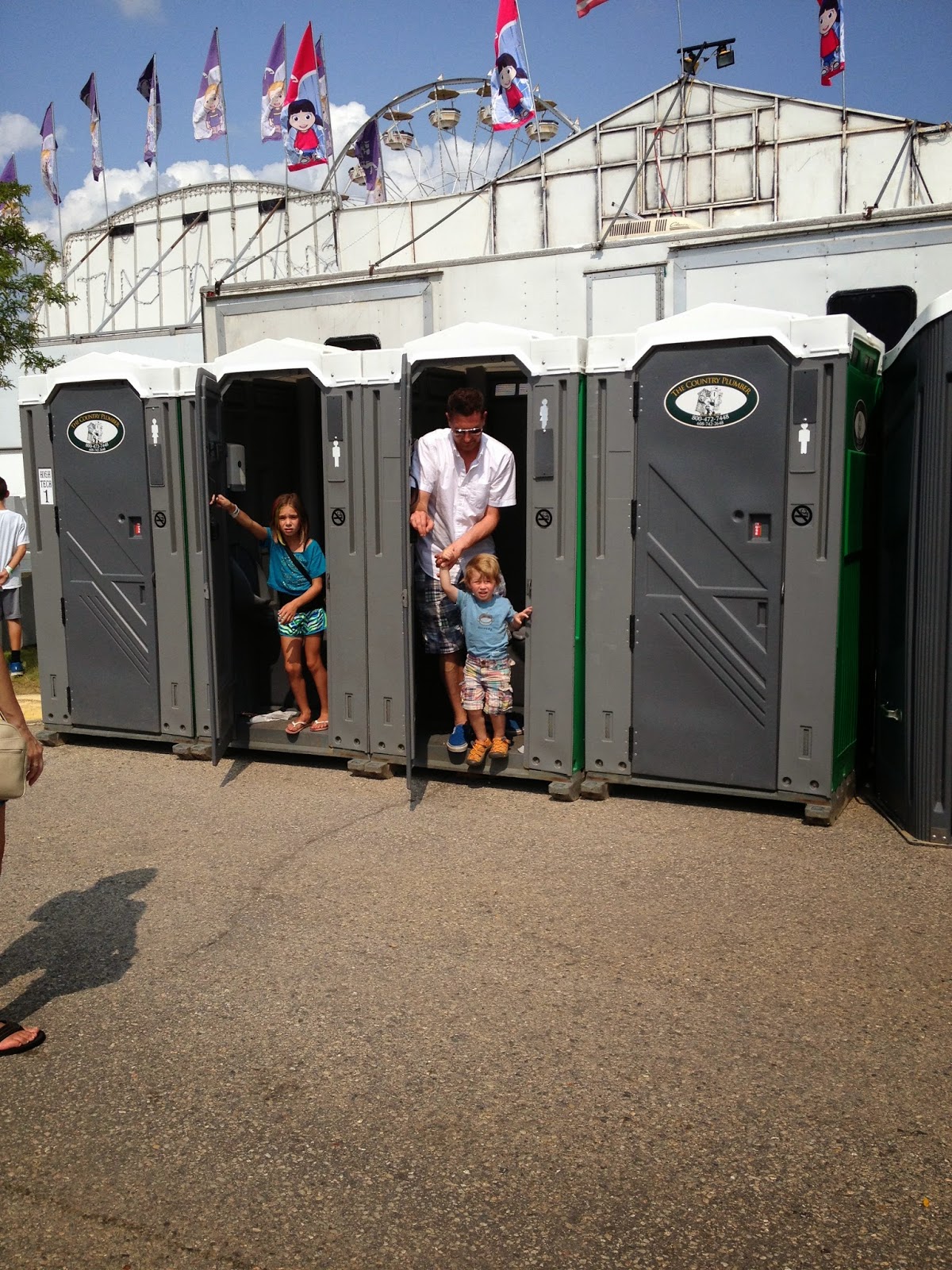 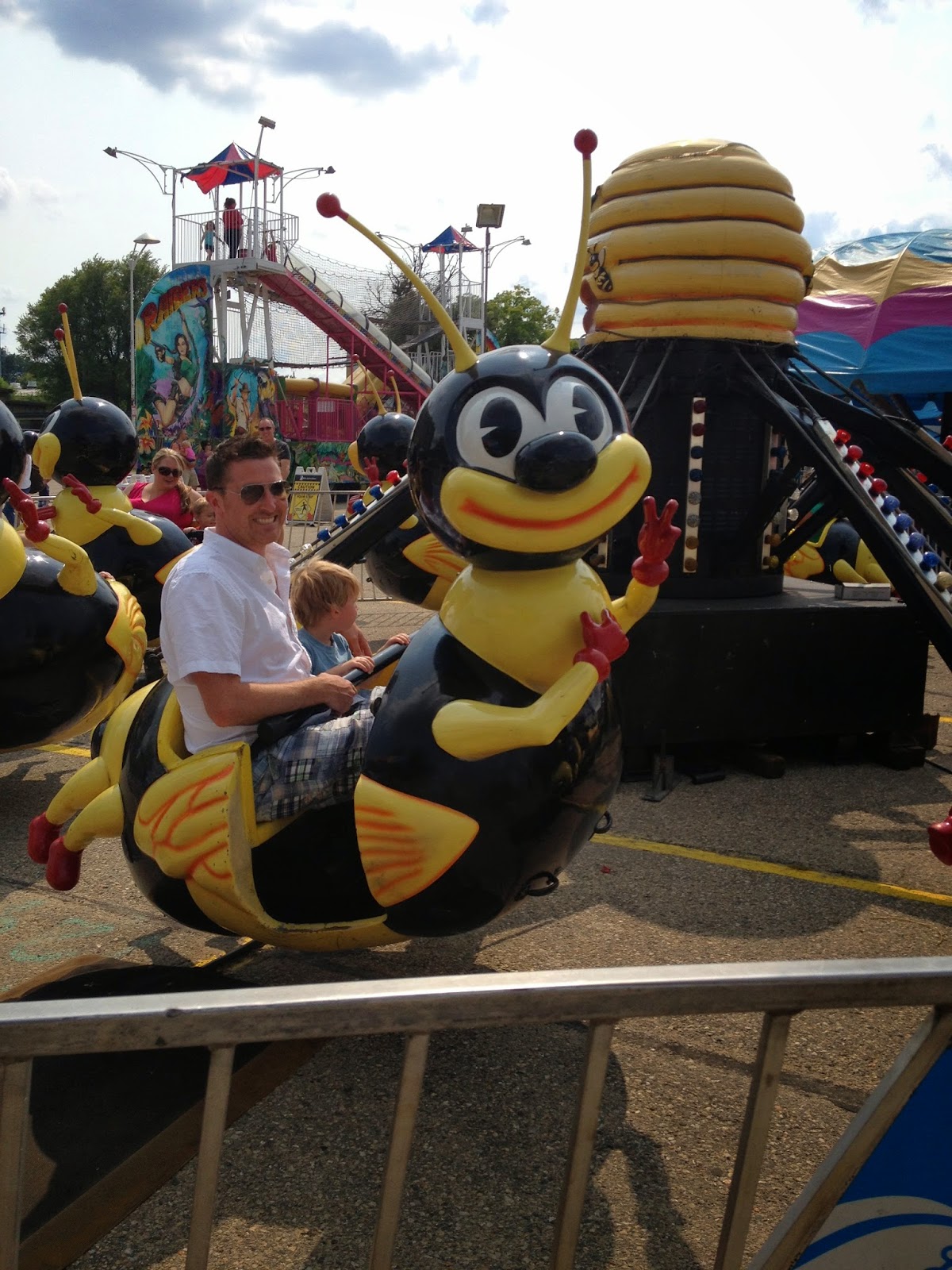 Standing in line and holding his own tickets. 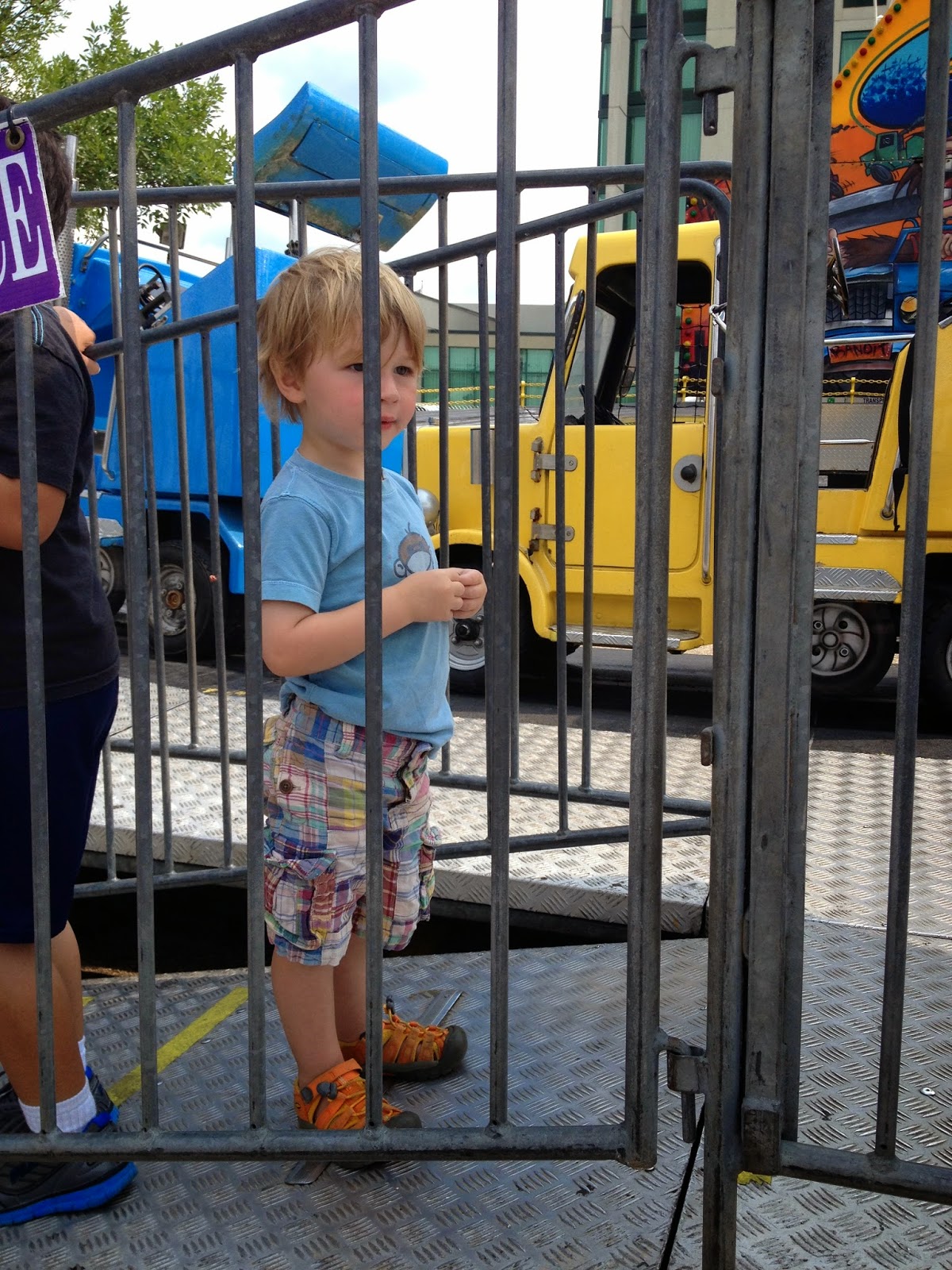 Jack and Cooper loved these cars. 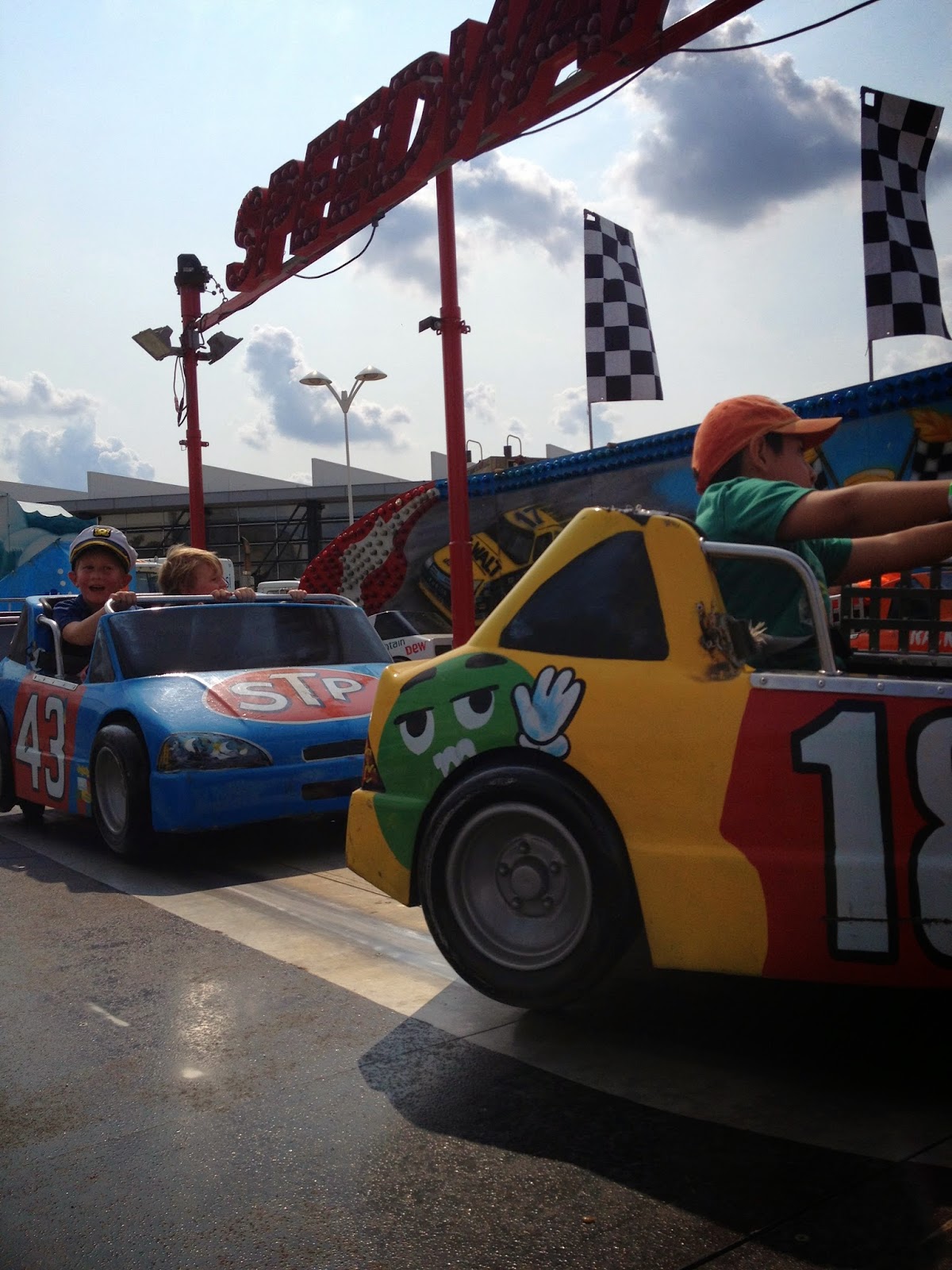 We can NEVER see a damn thing with this telescope. Ben.  Eating an ice cream cone in bed.  Be jealous.  He's all mine. 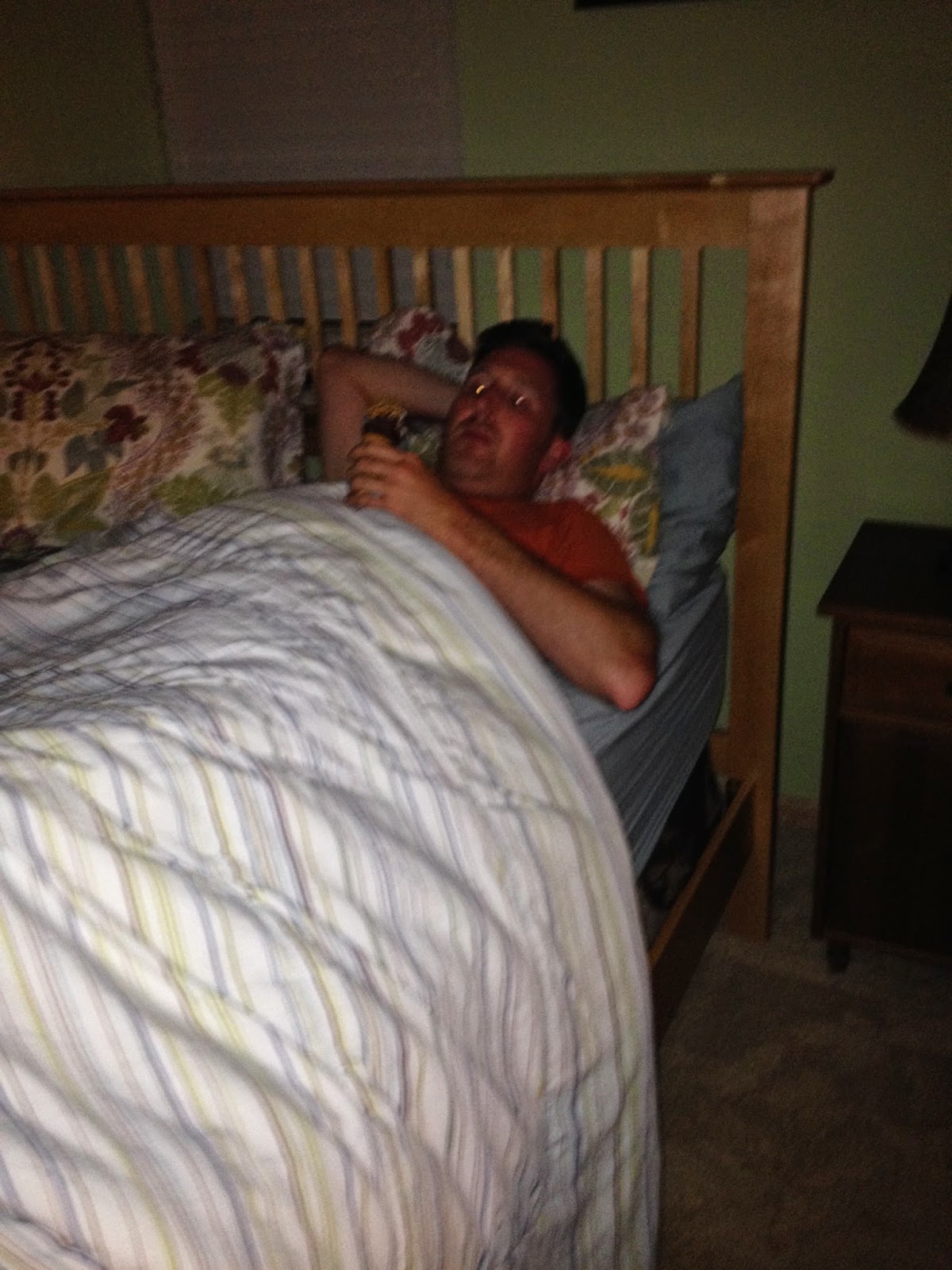 such a cute darling ..actually Dorothy is a mini-you .
When she grows up you both are going to look like sisters

To echo Chiconky, this post was full of awesome.