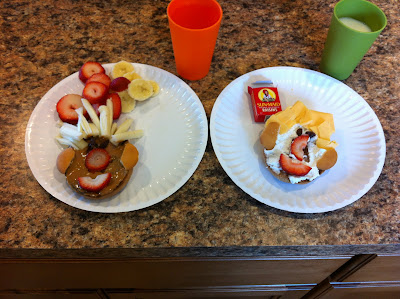 Right before I had Cooper, I made cute little bagel faces for after school snack and posted them on Facebook because I was 41 weeks pregnant and very proud that I still had what it took to stand upright long enough to smear some cream cheese on a bread product and cut fruit into odd shapes. These particular bagel faces also matchstick carrot hair, but I digress. Amy made a comment like hahaha, my days of bagel faces were numbered because once the baby came, I would toss a plain bagel at my kids and call that snack. At the time, I was all "Whatever, Amy. I will bento box the shit out of every organic scrap in this kitchen WHILE breastfeeding and writing 2 journal articles."

But then I had the baby and everything went to hell. OF COURSE.

7 months later, though, THE BAGEL FACES ARE BACK! Which is, of course, a metaphor. We have our ducks in a cute little healthy row again, finally. We have a routine. We're back to normal. Better than normal because Cooper is so affable and cuddly and part of us now. But, really, normalcy been a long time coming, and there are a few caveats.

I am still fat as hell and eating like a linebacker. I am a good 20 pounds heavier than normal, and the worst part is, I have gotten USED to it and have an entire 2 season wardrobe of fat clothes since I had to buy spring clothes for this ass and a half I am sporting. I planned to be skinny by now and buying all my clothes at Anthropologie, but since I am fluffy, it's all Gap ad J Crew for me. Anthro in the fall??? Not unless I get my fat hands out of the kids' Easter candy. Which doesn't seem to be happening since I am surrounded by M&M wrappers right now. And the muscle tone in my stomach? Ha freaking ha WHAT MUSCLE TONE? And we are heading into swimsuit season. Oh the horror.

I haven't done a damn thing at work all year besides course prep, teaching, course administration, and grading. Luckily, those are the things I am paid to do, since my position is not tenure track and does not include research. But seriously, people. How long am I going to do nothing with my dissertation? Because we are going on 3 years,and it gets more depressing everyday. Soon, the weight of not writing is going to be so heavy I won't be able to ever lift my pen again.

Ditto on the fiction. For the first time ever, I have a great plot (plot has never been my strong suit, which is why I minored in poetry) but NO TIME to write. NONE.

I still don't have it quite together in terms of daily housework. Tonight for example, my slow cooker chicken on the bone fell apart in the slow cooker because it was so tender and juicy and delicious. So I served everyone a huge plate of hidden chicken bones and almost killed us all. Ben swallowed one and threw up and called urgent care. If we had a dog, it would have died for sure. 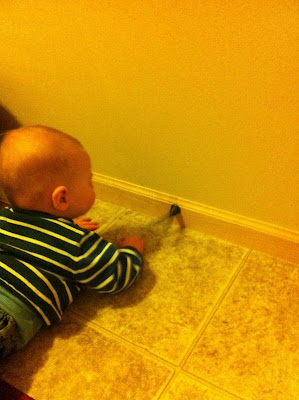 Harry joined a soccer team that practices across the street and is made up of all his kindergarten friends and is preshus. 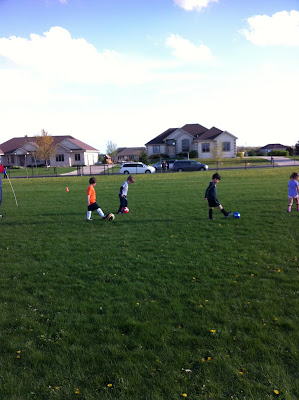 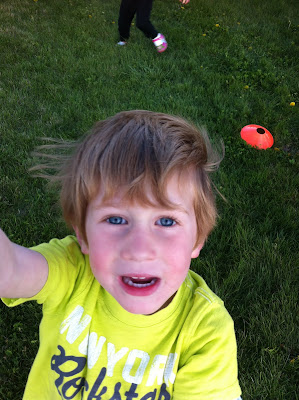 Which reminds me, doing bedtime for 3 is a real pain by myself-- definitely would get a sad bagel face if all my emoticons were anthropomorphic breakfast foods. Which? They totally should be.
Posted by Sarah at 8:26 PM

I think I also might have also told you you'd hit your stride right around six months. :)

Three kids is haaaaaard. I hire a sitter when I take the big kids to swimming and tennis on Tuesdays because the thought of entertaining Maeve for two hours while they frolic in the pool and on the court makes me twitchy. So she stays home and has fun and I get a little reading time in.

Yes, things started to get better at six months for sure. The research didn't start happening until 12 months though and now I have ideas but NO TIME. I am hoping that is what summer will be good for and have a babysitter three afternoons a week.

I love this post because you have your old voice back! Glad you've hit your stride.

hang in there, in a few years everything will fall into place...Bomma

I love this post! It made me smile, and gave me hope that if we do have a third, my life will be normal (or our crazy f'ed up version) again.

Sorry, just had to comment about the door stoppers. My little lad is only 9 weeks old so too young to play with them at the minute, but we have 2 rabbits in our house and they love playing with the door stoppers. They constantly sniff around them and then make themselves jump when they knock them too much and it bounces back at them. They run away for 2 seconds before coming back again...and again...and again!