When Cooper is tired, shit hits the fan.  Fast.  With no preamble.

Like this morning at breakfast.  I knew he WOULD be getting tired because he woke up an hour before normal and did NOT want to go back to sleep. Well, that's not entirely true.  He drifted off twice in bed with me a little after 6, just long enough for my own eyes to close and then woke himself (and me) up by trying to sit up and gasping with joy.  That's how I heard him at 5:47, by the way-- I heard the sharp intake of breath that precedes a huge grin and then the airy little "ehhh" sound that comes at the end of one.  I found him smiling at various fat limbs that were stuck through the bars of his crib.

Anyway, breakfast.  One minute he was sitting on my lap laughing and cooing at Harry and Jack, and the next minute he was angry screaming.  I took him into my room and put his sleep sack on him over his jammies while he tried to eat my shoulder and his own forearm, growing increasingly disgusted with the lack of milk they produced.  I tried to nurse him, but he was too tired and angry to wait for the milk to let down. I kept switching him from side, but he would only suck for maybe 10 seconds and then look at me with reproach and scream.  Finally, I stood up and bounced him while he ate (as pretty as it sounds), and he drank a little and passed out in my arms.

I don't know how long he'll stay down, so I am in a rush to frost the clock face cookies I made for tomorrow night-- Jack saw an episode of Max and Ruby where they stayed up for NYE and their grandma made cookies shaped like clocks.  We were discussing our own NYE menu, and Jack held up one small finger and said "And time cookies!" so of course I had to make them.  I couldn't find grandfather clock cookie cutters (because WTH?), so I made round ones and plan to frost them in white and draw numbers and hands in black.  They'll have to do.

I'm writing this while I wait for the frosting to return to room temperature after a long night in the fridge and so I don;t forget what a tyrant my baby is when he's tired. 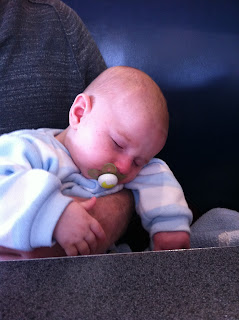 But he's a cute tyrant!

Thanks for the reminder that I want to do a special NYE dinner this year. Last year was kind of chaotic with the ten-day old in the house.

AJU7 has had crazy moments like that too. The worst is when she refuses to let me sit down (without her screaming like a crazy baby). Luckily now that we are home from our Christmas travels, she is settling down. So, hopefully 4.5 months is when life gets a little easier...

I blocked those days from my memory. OMG, I hate the 0-to-60 baby craziness. Always made me twitchy.

I remember those moments. Its a good thing they're so cute. And he is SO cute.