I have been drinking so much damn water that I got up to pee every 2 hours last night.  Now, though, we just have run-of-the-mill fussiness before bedtime and evening cluster feeding.  I had been trying to establish some more consistency with a nap routine, and it was working out well, but he was only sleeping for like 40 minutes at a time in his crib, and he was just too fussy to handle any sort of milk delay.  Yesterday and today, I wore him or Ben held him for all of his naps, and he was just generally more tolerant.

I got a hair cut today for the first time since mid august, and OMG, I look so much better.  I always want long hair, but when I get to the just-past-my-shoulders stage, I give up and cut it off.  I didn't want to do that this time, but I was carrying at least 5 inches of dead ends, and it was dragging my face down, you know?  The problem, though, is that I was also growing out a massive wall of bangs-- they were straight across and about as long as the tip of my nose, and they started at the middle of my damn head.  My stylist was like, "Okay, listen.  The only way for me to fix these right now is to make them side swept bangs, but they probably won't look great until next time you get your hair cut."  I am glad she was honest with me because they are not my favorite bangs.  She did, though, do a really nice job of taking most of the weight out of them, so they should look okay when I do my own hair-- always a bummer after a blowout.

I also got this today: 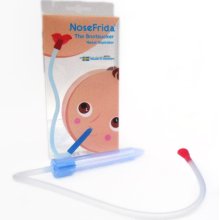 The Nose Frida.  It's a snot sucker.  You put the red end in your mouth and rest the large blue tube against your baby's nostril and suck out all the snot.  DISGUSTING, right?  There's a filter thank God so the snot doesn't actually go in your mouth.  But still.  Way more effective than saline drops and also way more horrifying.  I love Cooper so much I'll literally suck the boogers right out of his nose.  Wow.
Posted by Sarah at 7:39 PM

The Nose Frida was a new purchase with Maeve and it freaking ROCKS THE HOUSE. I love that thing more than life itself. I actually used it on Jack tonight because he couldn't blow his poor little nose hard enough.

I am telling you, life changing!

I think we need a picture of the haircut. I've been putting off getting mine done because, turns out, it's REALLY HARD to find a decent stylist. Now everytime someone sees me they say "Your hair's so long!" and I feel like I'm letting them down by chopping it off. Because that's totally logical. I'll be interested to hear how the nosefrida goes. I'm intrigued, but also a little grossed out.

I'm glad today was a better day for nursing. I remember cluster-feeds -- and always feeling like I was doing something wrong because of them!

Nose Fridas are so weird, but so effective!

I always get unnerved when the boobs go from huge, heavy, and obviously full, to normal-feeling but still working. It's a welcome change, but not, you know? Glad things are going better!

I am so OCD about boogers in Chance's nose. Like I will not give up (even if he's wailing) until I get that damn thing out. It is weird that I'd like to add this to my xmas list. Yes, I think so.