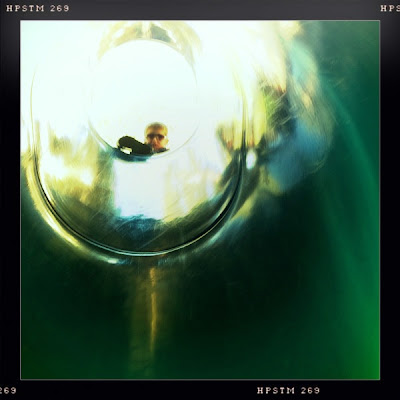 Last night, when I took Harry to the bathroom before I went to bed at 11, he felt a little warm. His eyes flew open when I set him down on the chilly bathroom floor, and he said quickly, as if he could read my mind, "What? How are you? Do I look sick to you? I feel warm."

Ben and I decided that if he woke up in the night, I'd sleep with him in our bed, and Ben would go downstairs and sleep on the couch because I am home on Wednesdays, and he's not.

At 2:12, our door burst open, and there stood Harry, Kramer-style in the doorway. "Can I sleep with you guys?" he asked, crawling over Ben to rest on my face like a 40 pound cat.

Ben thought it was time to get ready for work ad had his belt through like 3 pants loops before he realized what time it was, put his jammies back on, and stomped downstairs with his blankets (not because he was mad-- he just moves like a bear anytime before 8-ish).

Harry had no fever and claimed he didn't have a tummy ache or a bad dream, so when he kept kicking me and tossing in MY sleep, I didn't feel that bad telling him to knock it off. 20 restless minutes later, I turned on the TV for him. After Little Bear wrapped up, he slugged me to tell me he didn't want to watch Blue's Clues. I mashed some buttons on the remote and found, much to my delight, Rocko's Modern Life on Nick Toons. I fell asleep watching that for 12 or so minutes, only to be woken up by Harry dry heaving. We rushed to the bathroom where he spit on my foot with impressive precision and declared himself cured. Back in bed, he kept tossing and kicking, bringing me back from the brink of sleep several times.

Finally I yelled at him to just go to sleep already, and Ben came upstairs, suggesting I go down on the couch. Which I did. And relived my insomniac days by glaring at the clock and calculating the amount of time I had left to sleep if only I could FALL ASLEEP THAT VERY MINUTE.

I finally drifted off watching Teen Mom and wishing Amber would just put a damn sheet on Leah's crib.

When I woke up at 7, I felt like I hadn't slept at all. Then Ben went to work blithely promising to be home in just 12 short hours. Gulp.

Much to my surprise, though, Harry and Jack and I enjoyed each other's company. Harry felt fine, so we could go to the gym and 2 parks and the grocery store.

Jack was cute in that total pain-in-the-ass sort of way (seriously, he is into everything all the time. If I turn around for 2 seconds, he is totally nude, and he is completely illogical and cannot listen to reason but wants to help do everything from baking to laundry to my personal care routine). 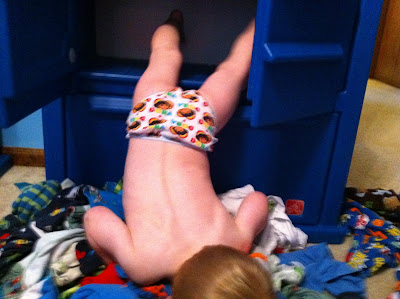 The 3 of us did a yoga DVD that I only had to pause once to stop Jack from eating a chunk of Harry's shoulder again. And we baked Paula Deen's monster cookies. (Recipe here). There was a bad moment around 6 when I turned on the TV for H an J so I could clean up dinner before Ben got home, and Dora was on, causing Harry to burst into tears because he claims to hate Dora. I suggested he go play with his iPod if he needed some Dora-free screen time, and he FREAKED OUT because he couldn't find it.

I took a bunch of Hipstamatic pictures at the park because I was so proud of myself for being a fun mom today even though all I wanted to do was lay around and look at the internet. 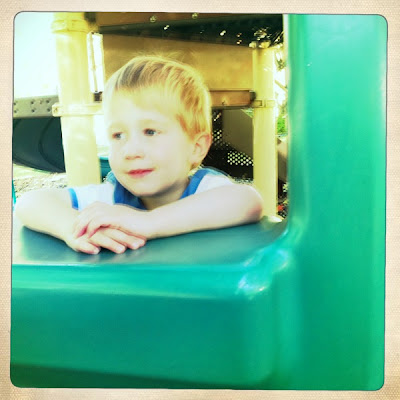 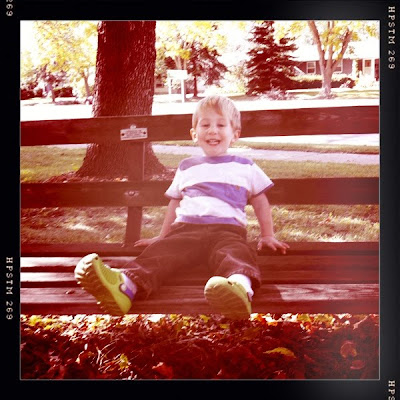 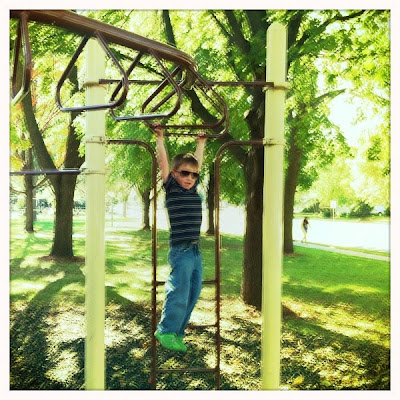 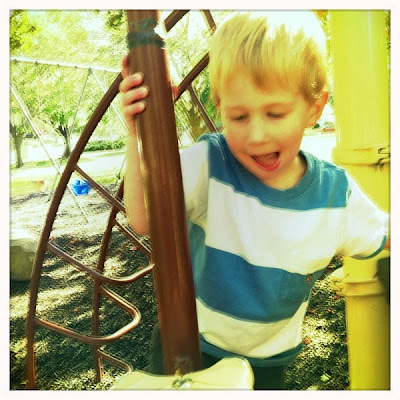 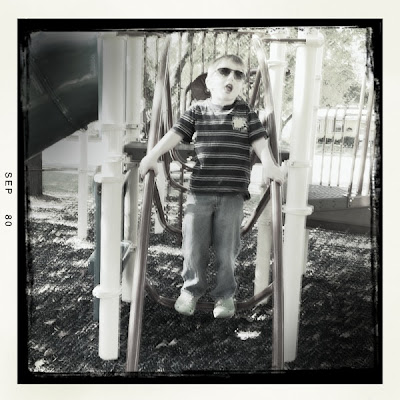 I don't get any sleep with little ones in the bed. On a recent trip I had to share a bed with Charlie and he kept kicking me so I made a wall out of pillows only to wake up with his head on my chest and his body parallel to the short side of the bed. The next morning he said "Someone put pillows in our bed but I FOUND YOU!" Adorable.

Glad he's not really sick. Way to have a good day anyway!

Yes, kudos to you for being a good mom! But honestly, those sunglasses that he's wearing CRACKS ME UP! LOVE THEM!

We just shared the bed with Sutton last night, and I swear, we are never doing it again! He winds up sleeping perpendicular to us! I had feet and elbows in my back all night!
It's amazing how they manage to sleep soundly, and we toss and turn all night when they're sick.

Harrison looks so tall hanging from the monkey bars, and Jackie is growing up so fast...aaren't kids amazing? Bomma

omg, Sarah, this post made me giggle uncontrollably in a crowded Starbucks. thanks for that.

Harry busting into your room as Kramer is one of the funniest things I've ever heard. And that picture and description of Jack, fallen flat on his head? I may never stop laughing.

I'm so glad Harry's not really sick, and I know it wasn't funny at the time, but holy hell, woman, you tell a funny story.