Now I totally get why Ben hates children's museums.

We used to have a cute old children's museum in our town that we took our kids to a couple of times (a few times, really). It was cute. Old. Small. Kind of dirty if you looked too closely at the play food in the farmer's market exhibit. Not the place you'd want to be during swine flu season. But still, a relatively cheap way to spend a cool and cloudy afternoon.

Last year the museum went on hiatus while a new facility was rapidly constructed and stuffed with learning toys. Last weekend, the doors opened and douchey parents poured in by the minivanload. I may be getting a little ahead of myself here, but holy hell the parents at the children's museum were so freaking obnoxious. Worse even than the screaming children and the huge crashes made by the wood blocks with the rough splintery edges on the second floor (which? wtf was up with those splintery freaking blocks?) Everyone's child was a total SPECIAL SNOWFLAKE, which meant they didn't need to wait in line, take turns, or wear their freaking SHOES (like the handy rules brochure at the front desk asked-- but these SSes didn't need no stinking RULES brochures). Also, there were signs posted all over the place that told parents to remember the value of play and suggested we not look at our PDAs. How was I going to bitch about my discontent on Facebook without my iPhone?

The place was PACKED even though we went on a random Tuesday afternoon, which means weekends there are bound to be hell on earth, at least until the aforementioned swine flu season. Every time I turned around, I lost one of kids for a second and had a mini heart attack.

Also, we have a ton of the SAME effing toys as the museum, but those toys just aren't as fun at home. Which is clean. And the only kid knocking Jack down to take his shit is Harry.

But still. The kids liked it (damn them), and it did fill our after-lunch but before-Ben-comes-home fighty time almost as well as the pool (it was too cold for the pool, which makes me sad because I had hoped to enjoy every single second of pool time between now and 9-1 (the end of the season.)) They were also shockingly well-behaved.

I think because I (yep-- their good behavior is all me-- their bad behavior is THE WORK OF THEIR FATHER) have been implementing tactics from Playful Parenting (the book-- I didn't know there was even a website until just now when I googled the name of the book). While I kid of want to punch the author and scream "But sometimes I am pissed at my whiney kids and don't keel like jollying them out of anything!" I have to admit his tactics work really well and make us all happier.


Harry and Jack totally dug the museum's cooking nook where they made yarn pies and pizzas. 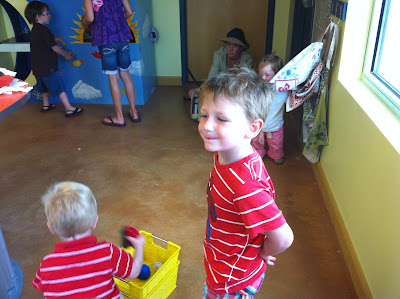 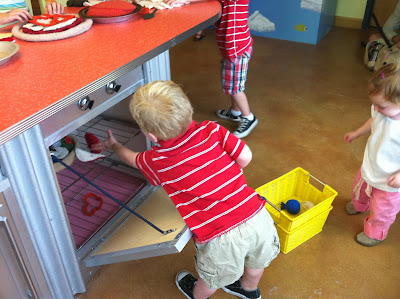 After a nasty pushing incident at the cooking nook, which I charitably interpreted to be a sign of low blood sugar, we headed to the atrium to enjoy a frozen yogurt parfait at the hippy healthy kids cafe (that was featured on Good Morning America and has a parent location where H used to take cooking classes back in the day) 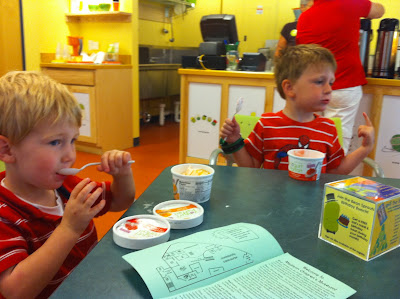 Note the little hut behind the donkey cart. It's where Jack left Pooh Bear his most loved lovey in the whole lovey world. Thank god for the docent who found him after our mad 20-minute search through the museum (slowed down by Harry, who kept stopping at all the cool science exhibits) 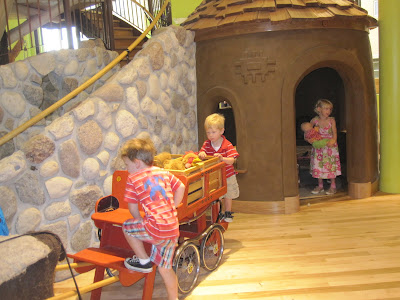 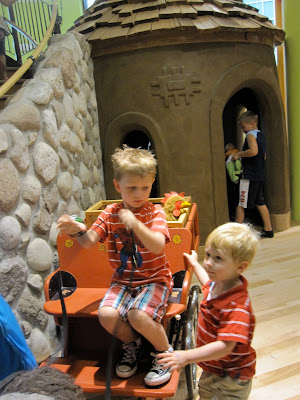 Harry and Jack blithely built a pen around themselves, and I would have let them live in it happily ever after, but the museum was closing. 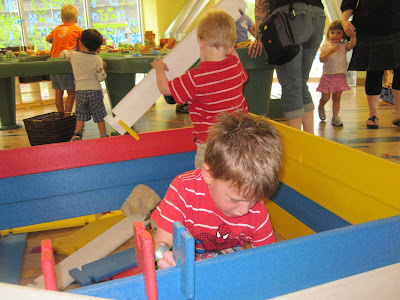 They played for the longest and most agreeable time with this model of our town done in blocks-- it was at the old museum and was a favorite there, too. 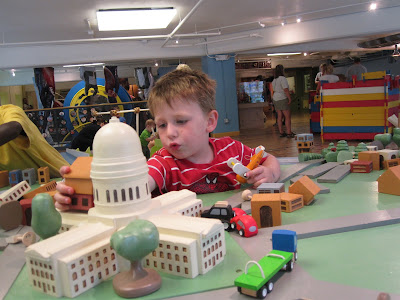 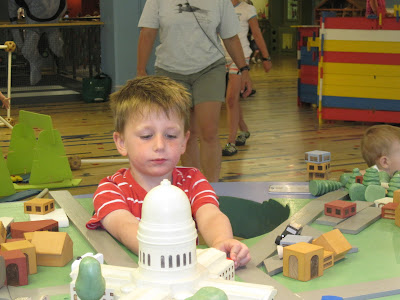 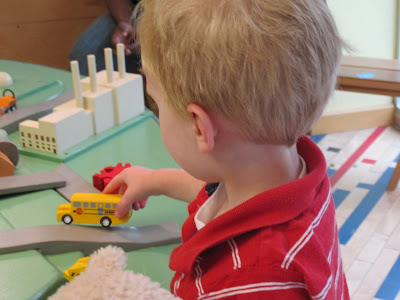 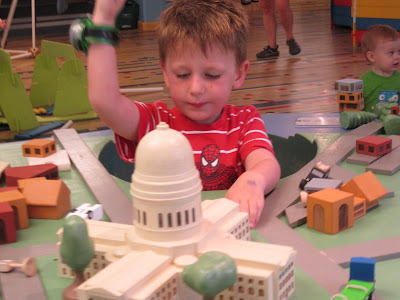 This old half a plane is a supply cabinet, too, and Jack spent a while trying to unlock it with a Tinker Toy he found. "Key!" he screamed joyfully. He carries a random fistful of Tinker Toys in his purse at home and calls them keys, too. Weird. 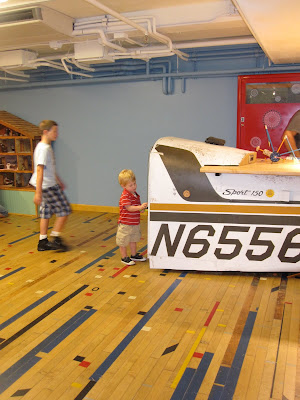 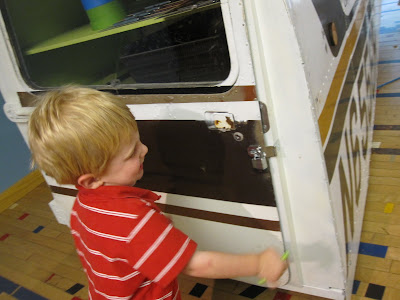 Jack wants to go to there 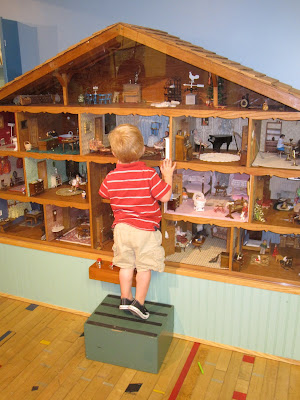 Okay, this was actually really cool--it's a huge hamster wheel suspended over the open staircase. 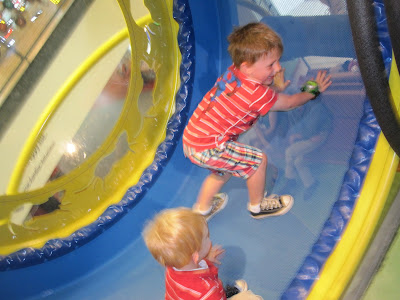 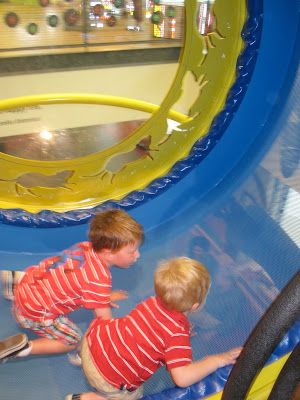 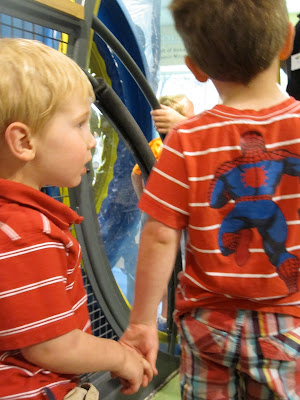 Hmmm. It looks like we had fun after all.
Posted by Sarah at 7:59 AM

I think everyone should have a hamster wheel for their kids! Best idea ever.

It does look like fun. I almost stroked out last time I went to the children's museum, though. CHAOS. And? They only wanted to play with the train table. Which they have at Barnes and Noble. For free.

At least this didn't happen:
http://blogs.citypages.com/blotter/2010/03/two_women_set_g.php

Awww! Be sure to show them that picture, if anything just to prove that they sometimes get along!
I hear you on the museum. We went ONCE, and were so traumatized by the obnoxious kids and offensive parents. And by "we" I mean me and Dave.

All roads lead to the Capitol...

Do I have to read that book? Can you just summarize it and publish some talking points? I can't read another parenting book because I'm too busy yelling at my kids and administering time outs...

Does the Bean Sprouts on sight serve spirits? Because, sometimes a Momma needs a little lube to get through the exhibits.

I would ralph a wee bit everytime we ventured into the foyer of Museum 1.0 and saw the Madison Table (my ex-boss had Mike build a duplicate in their mild-blowingly dysfunctional SS's Play Wing). Hours of germ swapping confined to one wooden alter... we'll be there praising Almighty on Friday. Hope the beast has retreated to a back corner of floor2, next to a Valtrex grade hand sanitizer.

I need to get a hamster wheel. That's awesome!

We've got a museum like that near us, too; crazy parents, special snowflake kids, Ethan's always sick 3 days after we go--the whole works.

I feel exactly the same way about Playful Parenting. Parts of it make so much sense and I embrace, parts of it I grudgingly 'get' and some of it makes me want to stick forks in the guys eyes.

And kid places - I have a love/hate relationship with them. I love the idea but I hate the crowds/other children to deal with. Oh, and the germs like you found...