Until last week, though, the diving boards were way out of his league. The 13-feet-deep water in the diving well scared him a little bit, so he'd yell "NO" when anyone suggested he might like the board-- his swim lesson friends, their parents, us, my brother-- all met with a resounding NO.

One afternoon, my brother casually referred to the board as the Bat board, and Harry nonchalantly said he'd like to jump off of it. At bedtime that night, he told me that it made his tummy feel funny-- like it was going up and down-- the first time he walked the plank, but he figured what the heck. 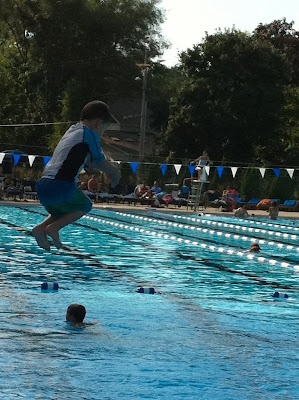 The pool has been fabulous. Not only has it totally saved my sanity, but Jack has gotten over his reluctance to go in the water, and Harry is a swimming little fishy. I have also had a place to play with the kids for hours at a time where I don't get bored or worry about looking silly. Best summer decision of the year, that's for sure.

I have noticed a weird phenomenon among the other moms. First of all, none of the moms of young kids wears bikinis at the pool, even the ones who have the bodies for them. Not wanting to look like the flabby town whore, I bought a few tankinis and a one-piece to wear.

Lately, though, some of the modest-suit moms have busted out their skimpier 2-pieces. I don't know if they bought them n clearance, egged on by their nice tans or what, but tons of women are sporting white tummies and tan appendages these last couple of weeks. I even tried on a couple of my old bikinis, but, um, they must have shrunk or something while they languished in my dresser drawer. Yes. Shrunk. That's definitely it.

I think we might have visited the pool for the last time, but we have 12 more days to try to squeeze in a couple more visits, a couple more plunges. 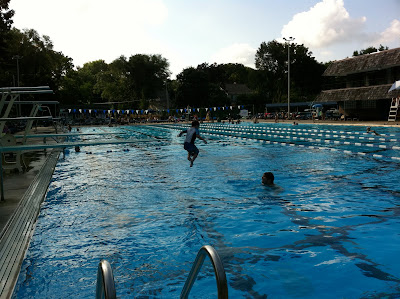 I don't think most people feel like they have a bikini body after having a kid, even if they do. My goal for next summer is a bikini. I might have to spend more time with Jillian Michael's than I would like, but it's my goal.

The moms in my hood wear bikinis to the wading pool. It's quite annoying.

I bit the bullet and wore my bikini in Miami, not perfect, but getting there. I find that there are usually way more women who shouldn't wear a bikini wearing one, so no one looks at me and my almost-back-to-prebaby self and judges.

those pictures are amazing! I am hanging my head in shame that Ethan didn't get swimming lessons this summer; he's Mr McWaterwings for the time being. Next year we will plan more effectively and join the pool near us.

I can't even begin to speak about bathing suits, let alone bikinis. Oy.

Glad you are enjoying the pool. I am not adventerous enough to try it this summer with my kids - but maybe next year. Before you know it, Jack will be jumping off the "Bat board" too!

And swim suits - I will stick to my tankini. I am no where near willing to show off that much skin...