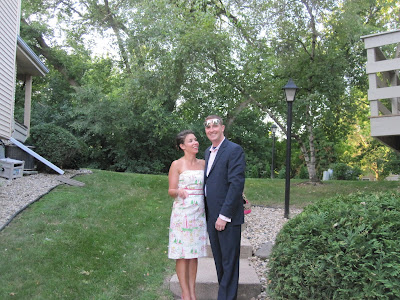 I have decided to make an anniversary tradition out of wearing my old rehearsal dinner dress and wedding shoes out to dinner. Next year, I'll think about losing the tan lines. Yikes. 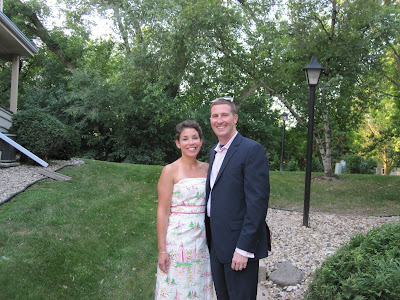 I drank waaaaaay too much last night. Just like on my wedding, actually. The day after we got married, we met all our families for a big breakfast before heading over to my parents' house to open wedding gifts because our flight to Mexico didn't leave until Monday morning. We were both all pissy about getting up so early, you know, for breakfast at 10. Flash forward five years where no matter how wasted we get or late we stay out, we're up making breakfast by 6:25.

Both boys went to bed well before the sitter arrived at 7 last night, so they are both super chipper and delightful this morning. We? Are not.

But we were last night when we took this downtown selfie. 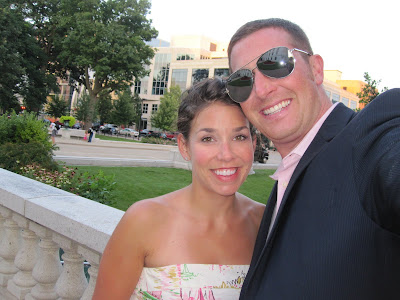 Last night was great. We walked from Ben's office downtown, stopping at a bar where I had 2 lemon drops that destroyed me. I tottered on my wedding shoes around the square to our restaurant and the world didn't stop spinning until midway through my salmon. I had a glass of champagne by my plate and sipped it a little. Then with a particularly emphatic gesture, I knocked it all the hell over the table cloth, Ben, and the back of the banquette, missing the older lady next to him who was scrutinizing her amuse bouche (heirloom tomatoes with oil and cheese--so delicious) at that moment and didn't see the show.

The restaurant is a particular favorite of mine that uses only local and organic ingredients, so its tiny menu is always changing depending on availability. I had a tangy field green salad, and my salmon was fantastic, served with cucumbers in a, um, sauce or something (I could not totally read the menu's fine print). Ben had scallops, a tenderloin, and a cheese plate. I inhaled chocolate hazelnut cake and a tiny pot of decaf.

We stumbled to an undergraduate bar down the street to sit outside and wait for my brother to come pick us up, and Ben said I had to have a drink, but I sure as heck didn't drink it. I think the hippy in the headphones next to us might have slammed it when we left. More power to him. 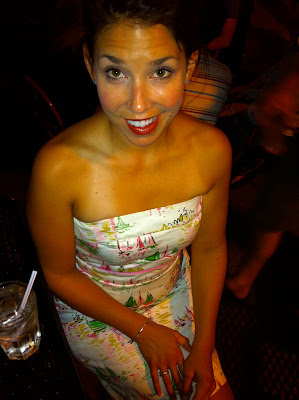 See that drink? Just a prop.

I gave myself a french braid updo last night secured with about sixty million bobby pins and when I pulled them out before bed (at 11 because we are really that lame) (along with some hair apparently, which was a nice surprise on my vanity this morning. Blech) I flashed back to my sister-in-law's wedding five years ago in June, where I had the most gigantic updo ever created and sat on the edge of the jacuzzi tub in our room after the reception and lined hundreds of hairpins on its marble edge while soaking my poor bridesmaid's feet in the bubbles. And then I slept until 11.

Ah, those crazy kid-free days. Whatever did I have to bitch about?

Wow, Ben said to me last night as we crossed a street after dinner. Five years. I feel like now we're really in it for the long haul.

At the time I died laughing, but he's right. It feels like a real milestone, and we probably wont feel this accomplished for another five years, when our kids will be much older and August 7 might see us both sleeping it off.
Posted by Sarah at 6:45 AM

at least 54 to go...Bomma...and I knowyou'll do it too...many more years of happiness and stress ahead, I know.

Happy Anniversary!!! And, what a great idea to wear your wedding shoes and rehearsal dinner dress out to celebrate! You two look very happy!!

Happy Anniversary! The last 5 went by fast, huh? Try to get a nap in!

Happy Anniversary! You two look great ready for your date.

We spent our fifth anniversary defending my dissertation and then going to a party to celebrate.

Happy anniversary!! I wore a dress SO similar to yours to my own dress rehearsal a week earlier than yours 5 years ago. I like that tradition of wearing it on your anniversary--now I just have to be able to fit into it by next anniversary! LOL

Is it bad I can't remember what we did on our 5th anniversary? Maybe not. Maybe there was alcohol. Yeah... alcohol... that's my story and I'm sticking to it.

Congratulations on 5 years!
I kind of wish I had dressed up for our rehearsal, but we did an outdoor bar-b-q for the dinner and THEN did the rehearsal that evening. So, no time/need to dress up.

That dress is incredible!

Is that a Boden dress? I have a similar Boden skirt. So pretty!