One final note about the great Purge of Fall 2010. We cleaned out the kids' closet which entails not only stacking up all the games and puzzles and finding stray Cootie heads and dice but also making sure each boy has clothes in his size for the upcoming season. 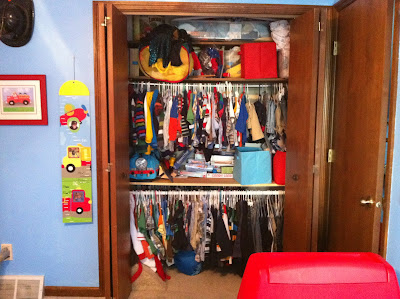 This is quite the freaking process. First I go through all jack's clothes on the top bar and decide what's too small (these clothes are packed away in to huge bags in our storage room or into the Tupperware box on the very top shelf of their closet) and what's too stained (these clothes are either tossed or donated, depending on the location and severity of the stain. Next, I shove all of Harry' clothes to the back and reach the hidden bar behind his clothes, which has all of his recently outgrown clothes that can be worn again (the unwearables are either tossed or donated). I move the ones in Jack's size up to Jack's top bar. Finally, I sort Harry's clothes and move the too-small stuff to the back, to wait for Jack's next season.

As a "special treat," I got to hang up a few shopping bags of new clothes on each boy's bar, too. Mainly Harry's. I have been buying them stuff here and there for the upcoming school year, and I needed to unpack it and make a list of items needed to fill in any holes in their wardrobes, which I was sure would be a short list. Ha!

(On a side note: we went to a giant shoe store in a town near us and the boys picked out new Crocs, Pumas, and wellies. THE SAME ones. So if these shoes last, Jack will be wearing Buzz and Woody Crocs, yellow and blue Pumas, and Batman boots for the next 2 or 3 years. But seriously, this store was amazing-- every brand of kid shoes you could possibly want, from Birkenstocks to Uggs to Stride Rite to New Balance to Merrel, all in the same spot-- a dream store. Like Zappos in real life. And because it's Wisconsin, they were grilling brats out back for $1).

I have bought Jack only one pair of jeans (gray skinny jeans-- ha!) because I assumed he would have a ton of 2T hand me downs in the back of Harry's half of the closet. Um, not so much. 2 pairs of jeans and some khakis from Gap with little bulldogs on them. WTH? 2 sweaters and a few button downs. THAT'S IT. Everything else back there is 3T, which is waaaaaaay too big. Did Harry skip that size or ruin it all?

Meanwhile, I apparently stocked up on the 4T at the very end of last season, which is the size jeans Harry still wears and the size I have been blithely buying for weeks. So he has 11 pairs. And a half dozen pairs of khakis. Oops.

Something that has been on our list for awhile now is a trip to the Milwaukee Zoo, which is way better than our little free zoo and has hippos and elephants. Also wolves, which both kids were inexplicably excited about. Jack even got a stuffed wolf in the gift shop that he carries under his arm along with Pooh Bear and calls Pooh Wolf. 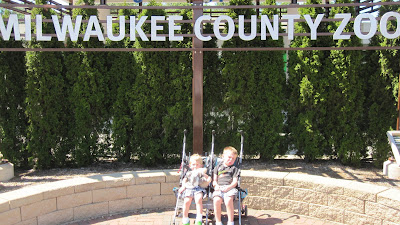 Not sure what we were all looking at here, but I bet it was a person. There were some serious fashion FAILS walking around (but I am wearing my camera bag across my body like an effed up purse, so who am I to talk?) 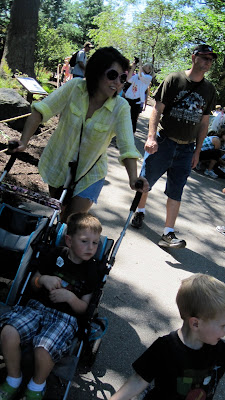 Okay, so there is this animatronic dinosaur exhibit at the zoo right now, and it was...odd. 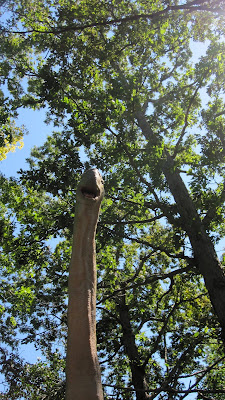 BTW, Ben fell asleep watching some screwy survivor show on Discovery, and I was just about to change the channel when The Last Day of the Dinosaurs came on, and I could not look away. It was horrifying, especially for someone prone to catastrophic thinking and panic attacks. And now I can't stop thinking about 2012 and I never knew that triceratops could CRY. 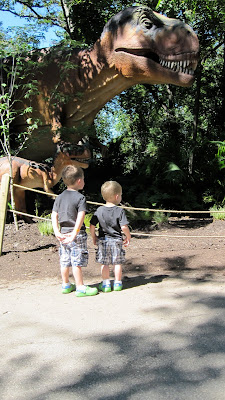 I am cool with endangered animals at the zoo (even at our tiny zoo which can look a little grim and where animals might be better off taking their chances in their wild), but robotic (and probably wildly inaccurate) extinct animals? More like museum territory, huh? 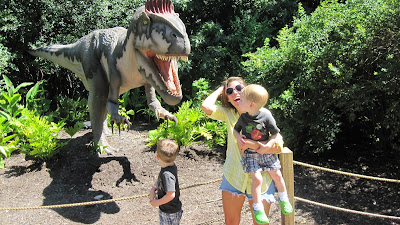 The highlight of Harry's day might have been the Sponge Bob popsicle with the gumball eyes. 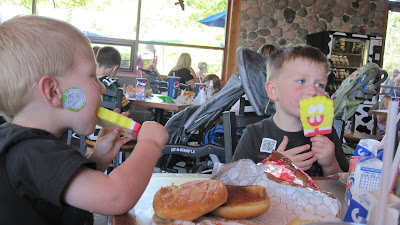 Or drinking milk and slushy simultaneously to replicate the Dannon yogurt concoction he sees on TV that his mean hippy yuppy parents won't buy him because it is not organic and has red dye and HFCS (which he calls high franklin corn cream) (all nutritional bets are off at the zoo cafe, in case you couldn't tell). 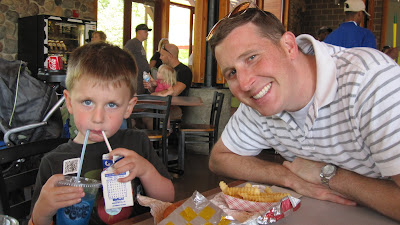 I love that peafowl roam free at this zoo. 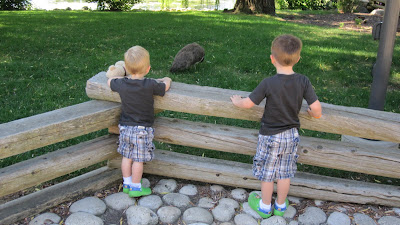 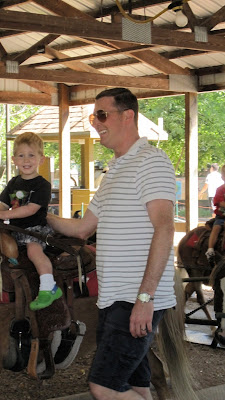 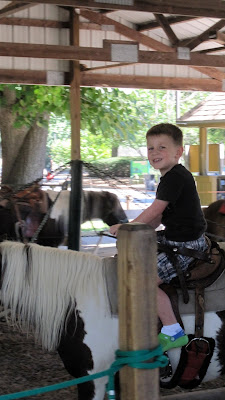 Jack was wiped out. This is him before we left the parking lot. 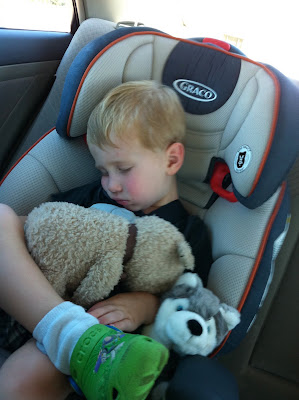 I like your clothes system! We do not have one so I have a heart attack every seasonal change. The only thing I know for sure is that Charlie needs jeans. I now have the living room covered in baby clothes and the upstairs covered in toddler clothes (from a variety of seasons). I think we'll be hitting the consignment shop today so Taco has more than five warm sleepers (because that's like a day's worth if I remember correctly) and Charlie has some pants.

I bet he flew through that size. I've noticed it when I'm pulling stuff out for Julia to wear. (Who, by the way, is in a size 3T...) I always complain about how many clothes are in Elisabeth's closet, but I don't anymore because it all goes to Julia and that saves me millions of dollars down the line. :)

Oh, and I always wanted to go the Milwaukee zoo. I've heard it's lovely, and I do have a zoo problem, you know.

I think Ethan is completely skipping 3T in some brands--his 2Ts are embarrassingly short on him right now so we are the market for some end-of-summer 3Ts STAT to get him through the rest of the hot weather, and then it will be all 3Ts and 4Ts from here on in. He's so skinny I have no idea what 3T jeans will look like on him (I might be forced to get all skinny jeans just so they don't look like parachute pants on him).

I like your system--I have clothes EVERYwhere right now--in bins, in bags, in space bags, all different sizes. It would make you twitch, I swear. I have to get organized. Ethan's old clothes are eating my house.

And yeah, that dinosaur exhibit? I'd be passing on that one!

We LOVE the zoo - and I praise the day someone decided to let the "peacots" roam free. Our last visit there that was the ONLY animal Blake wanted to see and I was thinking we'd never find them. And then I turned around and one was walking down the path towards us! Hooray for the zoo!

And that clothes thing - I have a problem remembering/determining what gaps we need to fill in too. I really need to take stock before it gets too cool.