The other day while I was getting ready for school (my first day to teach this semester-- I'm not going to lie, I was a little excited to leave the house by myself and talk about big people things. So excited that I bought a shirt that I saw Lauren on Notes From the Underbelly wearing, and I wore heels! Well, I actually wore Uggs from my car to my office, but then I wore heels), and while I was doing my makeup, Harry was throwing clothes out of my bottom dresser drawer saying "Dress! Dress! Dress!" I though he was just offering commentary on what I was doing, so I kept responding with a noncommittal "Yeah, Mommy's getting dressed." Finally, he found what he had been looking for: a thermal shirt of mine he used to put on every time it came out of the laundry. This shirt has been MIA for awhile, though, because it's an extra small, and I am not. He insisted that I help him put on his dress (oh-- it was a noun, not a verb. My bad.), and then he tried to wear my shoes. He also found a black mock croc bag I used to carry that has a long, thin strap. He put it around his neck and alternately called it a purse and a necklace. Cute, but not safe, so I had to remove it before taking these: 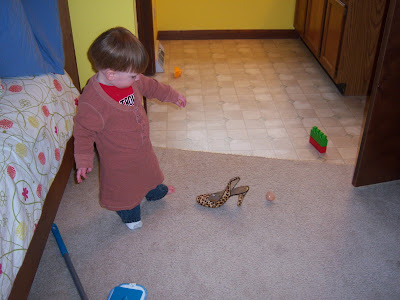 Notice how he removed his sock before going for the heel-- can you tell he goes shoe shopping with mommy a lot (or did before it became Ugg season, soon to be Wellies season, and pretty shoes had to stored for the duration)? 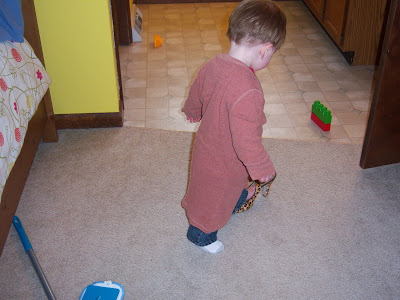 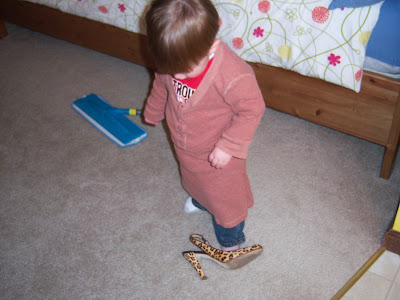 remember, he's probably an actor, not a cross-dresser..Bomma

That's adorable! It fits him pretty well across the shoulders. What a sweet boy!

For a kid I've never met before, I could not love Harry any more if I tried (does that sound creepy??) :-)

He and Ethan are so much alike. Ethan digs through my wardrobe to find the highest heel he can, and it becomes his Everest to try to walk in it.

And how tiny are you normally that that shirt fits your 1.5 year old son so well across the shoulders!! I think I hate you ;-)

I like your blog. I'll be back for more, keep it up!

Do drop by my blog and have a look.

So, someone comes to the door and 13-year-old Harry answers dressed like he is in these pictures. The guy says, "Is your mother home?" Harry says, "What do YOU think?"

I LOVE that joke
Cute pictures